Monticello started in the mind of Thomas Jefferson and came into existence in Virginia. Monticello in latin means, "little mountain" and this is where he built his mansion. Jefferson was a brilliant mind with no prior knowledge of architecture, yet he built one of the most respected buildings in the world. 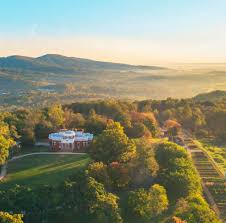 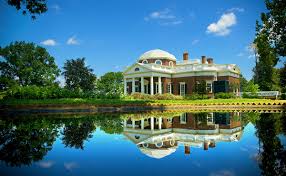 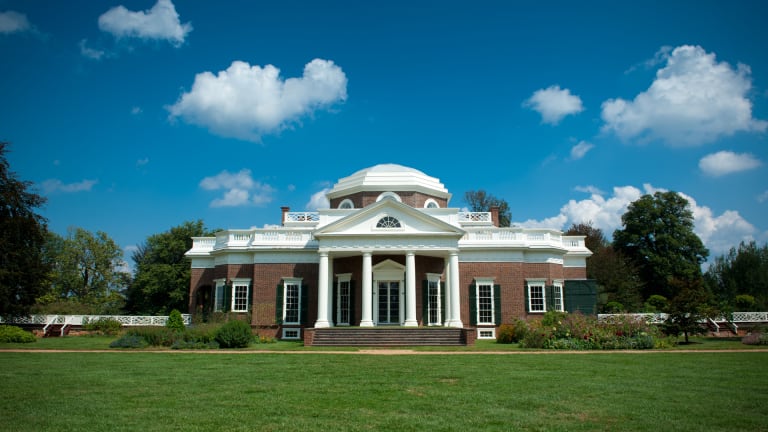 Little mountains are all around Virginia. Although, there is only one “little mountain”, which is “Monticello” in Italian. Monticello is a place that started in the works of a mind, and came into existence in Virginia. It was at the time one of the biggest architectural breakthroughs in the world. Thomas Jefferson, our third President, had a brilliant mind not only politically, but architecturally. People dream of one day possibly buying a mansion. Jefferson built his without any prior skills in architecture. Curiosity is something which many of us tend to discard and not dive into even though we have so many resources. Although, without these numerous resources, Jefferson used curiosity as a motive to build one of the greatest mansions ever built.

Jefferson was born April 13th, 1743 and grew up on a tobacco plantation in Virginia. This way of living put the country style living in his blood. He grew up and he inherited many thousands of acres and with it decided to build himself a home. In the era in which he lived in the 1700’s many people who were looking to build a house were given several different layouts. Jefferson being the man he was did not even give thought to this idea. He wanted to build the home he always dreamed of on “little mountain”.

In today’s world if we need lumber we can go to Home Depot, or Lowe’s. Although back then, many of these things were imported from Europe. Jefferson, being the person he is though, decided to use what the land around him gave him. He gathered workers and slaves to build, and used the wood of the many acres around him along with limestone to build the house. He used clay for brick and amazingly the nails that were driven into the mansion were even crafted there. This sort of resourceful thinking not only saved him money, but also made his home feel more like his own. It is like catching a fish, cleaning it, cooking it, and then eating it. The fish tastes better in many cases because you know that it was because of your own knowledge and resources that this fish became nutrition. Much like how Jefferson built the Monticello.

Slavery is something that was unfortunately a way of living in the time of Jefferson, and part of his resources were the many slaves that he inherited. According to Monticello.org, “He acquired approximately 175 enslaved people through inheritance: about 40 from the estate of his father, Peter Jefferson, in 1764, and 135 from his father-in-law, John Wayles, in 1774. Jefferson purchased fewer than twenty slaves in his lifetime.” This meant that he had many free hands to help him along his journey of building. It was said that he saw all people as equal, although by the looks of his slaves it said differently. He wanted to do his best to not use violence unless it was the last resort. Though, many times he was not at Monticello and many horrific violent things happened to the slaves.

The Shadwell family house burned down and then the “Second Monticello” began its journey. This was more of an addition than anything, although it is seen as the second. Years into the future his wife passed and he moved to France where he found the architecture to be astounding. The History Channel’s website says some ideas he took from France were, “a massive trove of art, furniture and books, he returned home with a new vision for the estate. Among other enhancements, he added a central hallway, a mezzanine bedroom floor and an octagonal dome–the first of its kind in the United States.” The heartbreak over his wife dying may have made him find a home in a completely new place, but from this he took great inspiration for Monticello. As much as he loved family, Monticello was also very dear to his heart.

Many people are into nature and birdwatching. Jefferson took these hobbies and made them into a lifestyle in ways. Specifically his gardens. His gardens were a work of art. He took great records each year to show which plants were doing well, which weren’t, what diseases were coming into the gardens and made sure to correct his mistakes. The greatest part was that this was right outside of his door. A lot of people have beautiful gardens outside their homes, but nothing to the extent of his extravagance. He grew up on a tobacco field so he understood farming techniques. Although, instead of tobacco he planted flowers, fruits and vegetables, even revolutionizing gardening with the skills that he had.

Everything comes to a stopping point one way or another in life. When Jefferson died he left the Monticello to his daughter, Martha, but what came with it was a ‘little mountain’ of debt. According to Monticello.org the final cost of the mansion was around $100,461.76, which may not seem like much now, but back then it was. According to inflation over the years that would be roughly $2,051,859.69 in today’s society. That being said, Martha ended up selling the property. It has since been refurbished and has been made into a museum to commemorate everything that it once encapsulated and still does in today’s world.

When it comes to persistence Jefferson fell nowhere short. His entire life he was working and thinking of new ways to add on to the mansion and property. He was the President of the United States, with one of the best getaways anyone could dream of. He was the mastermind to his own blueprints. He took from resources from the property to build his home up, while unfortunately tearing many slaves down. It was a time period where it was normal to have slaves, although I am sure many of them were as brilliant as Jefferson but were not given the same opportunities. Curiosity fueled the way in which Jefferson lived his life, and used the resources around him to build his home. We should take great inspiration from this on our own curiosities that we tend to put in the back of our minds.