How can the most famous gunslinging ruffian of the Old West be reintroduced into society as a well-meaning, amicable person of admiration? Using the power of remembering, the City of Hays Kansas managed to do this by introducing a statue of James Butler “Wild Bill” Hickok. It was given to the city by First National bank, now known as Emprise Bank, on April 29th, 1989, in remembrance of the banks 100-year anniversary. It was put up to commemorate the life of Wild Bill Hickok, portraying him as the law and order of the old Hays City. However, this law and order did not come without controversy. The life of Wild Bill in Hays City consisted of lost elections and controversial murders, but none the less he is known as a backbone to western society.

The statue of James Butler “Wild Bill” Hickok stands on the corner of 10th and Main street in Hays, Kansas. Put up by Emprise Bank, it stands in the middle of Hays, giving itself a pertinent place in the view of the town. 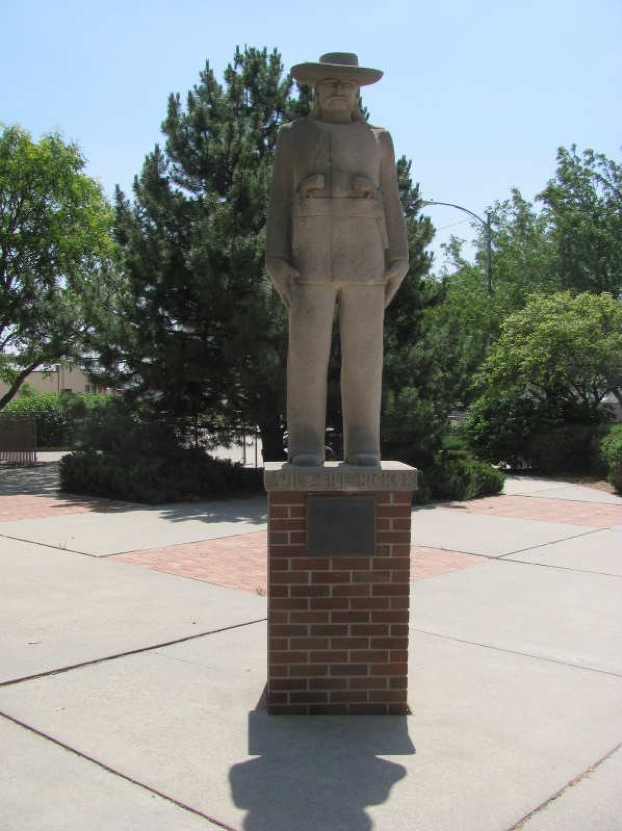 Hickok was serving as a scout under General George Custer when he first arrived in Ellis County on April 18, 1867 (Burkey 3). However, he left for Ellsworth country almost immediately after arriving in Hays, where he unsuccessfully ran for sheriff. Following this, Hickok found his way back to Ellis county in December of 1867, as the Deputy United States Marshal in the company of Charles C. Whiting (Burkey 4). He continued running back and forth from the Hays City area, acting as different titles and in differing jobs. In 1869, Hays City did not have a person manning the sheriff duties. Some influential men pushed for R. A. Eckles to become the acting sheriff; however, the governor believed that he did not have the right to fill that position. He left it to the town of Hays to elect its next sheriff. The town did not wait for elections, instead naming Wild Bill as acting sheriff. Therefore, Wild Bill was never officially elected sheriff, he was merely known as the man who kept law and order (Burkey 6).

The controversy with Hickok lies in the two “murders” he committed in his time as sheriff. The more controversial murder of the two was the Strawhan murder. Sam Strawhan was causing a raucous at the local bar when Hickok was called. Strawhan was allegedly threatening to murder anyone who got near him, which caused Hickok to shoot in self-defense (Burkey 10). This killing caused a stir in the local community, with some “eyewitness” accounts stating very different things. In the end, the jury acquitted Hickok on account of the killing being just and in self-defense (Burkey 11). Around this time, Hickok’s legitimacy was being called into question. The governor had not actually appointed him sheriff; therefore, Hickok held no legitimate power in Hays City (Burkey 13-14). This ended up being his downfall, as he ended up losing the true sheriff race to his former deputy Peter Lahan (Burkey 18). After an attempted assassination on Hickok, he decided to leave Hays City, and his eventual ending point and death town was Deadwood, in the Black Hills of the Dakotas (Burkey 21). It was later discovered that Hickok had returned to Hays in 1870 and was run out after killing John Kyle and wounding another soldier, Jeremiah Lonergan (Burkey 22).

Despite the murders, some still saw “Wild Bill” as a peaceful and amicable man, never wanting to start a fight or quarrel (Burkey 22). This premise was most likely one of the reasons that First National bank created this statue. Hickok played a vital role in western Kansas history, as he assimilated the “Wild West” with the law. Knowing this, the bank wanted to portray a character who was strong, yet amicable. Being able to stamp their name on the Hickok statue allowed them to permeate themselves into the caring, yet tough culture that surrounded Hickok.

A similar statue erected in Illinois gives more insight into the rationale of putting up a statue to a man as controversial and notorious as Hickok. The statue was erected in Troy Grove near the house Hickok was born (Rice 522). The town took pride in the character that Hickok was, as the governor stated that he was “dead square, dead honest, and a dead shot, and the sure foundation for these fine qualities was laid in this place” (Rice 522). These qualities are what the town was attempting to portray in the monument, just as the statue in Hays was attempting to portray. The statue in Hays stands straight and tall, just as a noble man would. Because of this, one could assume that the point of the statue is to remember just how impressive and good Hickok was as a man.

The lasting legacy of the statue in Hays resonates differently to different people. For some, he stands as a father of the frontier, a man who should have notoriety and fame for everything he has done. To others, Hickok was a ruffian who should not be associated with any town’s history. Both of these thought processes have legitimacy behind them; however, one thing that cannot be argued is that Hickok had an impact on the culture of western Kansas. The statue attempts to portray the awe-inspiring qualities of a man who changed so much in western Kansas.