The PCB Protest Historical Marker commemorates a series of protests against the creation of a landfill for toxic chemical waste in the town of Aston. In the summer of 1978, the Ward Transformer Company hired truck drivers to illegally dump PCBS (toxic chemical waste) along the side of the road in Warren County. This illegal dumping resulted 240 miles of contaminated soil. Governor James B. Hunt later decided to locate a new Warren County Landfill to dispose of the contaminated soil. Controversy ensued and lawsuits were filed against the decision over accusations that Afton was chosen because it was predominantly made up of low income African Americans. The lawsuit was defeated in 1982 and in August of that year 800 peaceful demonstrators arrived to protest against construction of the landfill. 500 of the protestors were arrested. 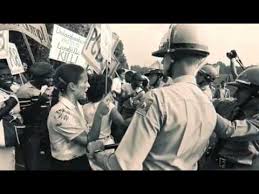 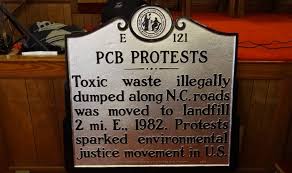 Police drag away a peaceful protestor 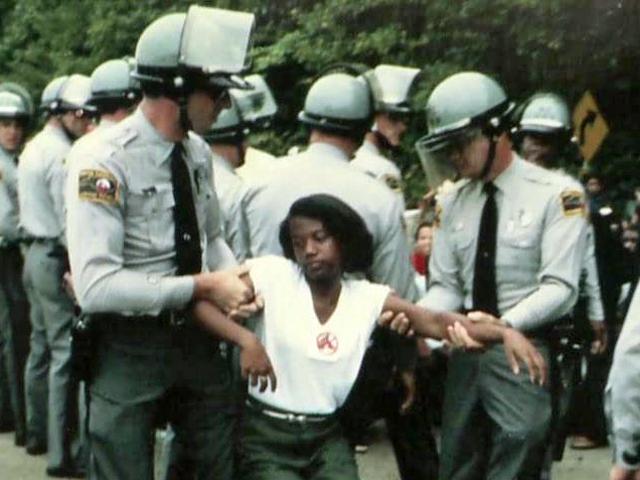 The PCB Protest was a peaceful protest opposing the disposal of toxic waste and deadly contaminated soil, illegally dumped by the Ward Transformer Company along the side of the highway. During the Summer of 1978, the company made the decision to dispose of the waste as a means of reducing costs. The contents of these trucks included old transformer fluid containing chemicals such as Dioxin, Dibenzofrans, and Polychlorinated Biphenyls. They are associated with cancer, liver issues, birth defects, and skin problems. Tanker trucks traveling under the cover of darkness, sprayed approximately 31,000 gallons of toxic waste along 240 miles of highway located across fourteen counties. Large Black spray marks were discovered in the morning raised suspicion for police. After an investigation, company owner Robert Ward and his accomplices were apprehended and sentenced to brief jail terms.

This was not the first major incident of improper disposal of toxic waste. Earlier in the same year, a similar event occurred in Love Canal, New York. Toxic chemicals were disposed along the side of the road much like the incident in Warren County. The chemical dumping in Love Canal New York, resulted in mass illnesses and in some cases death. Shortly after the incident, President Jimmy Carter declared Love Canal a disaster area. The Love Canal incident forced the EPA to tighten down on regulations pertaining to chemical waste disposal. Increased regulations resulted in significant higher costs for the proper dispose of chemical waste. The higher costs of proper disposal ironically led Robert Ward to make the decision improperly dispose of his company's chemical waste. One of the EPA’s new regulations was the requirement that a landfill be constructed to contain any contaminated soil.

Governor James Hunt chose the Town of Afton as the location of the new Warren County Landfill to store the Ward Transformer Company waste. The residents of Afton and sympathizers were concerned that the landfill could potentially pollute the waterways and cause irreparable damage to the health of the local residents. They also feared that the existence of the toxic was would crush any future investment that the small town needed to simulate the local economy. Many also pointed to the facto that Afton’s population was largely African American and low income; some thought the decision to place the landfill here was discriminatory. The NAACP came out in support of Afton residents and in 1978 representatives quickly launched a four year lawsuit to prevent the construction of the Warren County landfill.

The lawsuit eventually failed in 1982 and construction of the landfill began in August. On the first day of construction 800 protesters arrived to support the Town of Afton. Approximately 200 police officers stood watch as the protest occurred. Many protestors laid on the ground to obstruct the path of the dump trucks carrying the contaminated soil. By the end of the protest more than 500 protestors were arrested. The protest was considered a failure because the landfill was ultimately constructed.

Despite its defeat, the PCB Protest did shine a much needed spotlight on environmental injustices and created a newfound awareness of environmental protection. A United Church of Christ report produced in 1987, documented the correlation between the location of hazardous waste near Afracan American communities. A compromise in Afton was eventually reached after many lawsuits and public hearings resulted in an agreement that the landfill be detoxified when the technology is available.

Reimann, Matt. “The EPA Chose This County for a Toxic Dump Because Its Residents Were 'Few, Black, and Poor'.” Medium, Timeline, 3 Apr. 2017, timeline.com/warren-county-dumping-race-4d8fe8de06cb.