First chartered in 1856, Rodef Shalom was one of the first congregations established in the Pittsburgh area. Formed by a group of Jewish citizens in Pittsburgh, the congregation created the objectives to further the cause of religion and educate the youth of the Jewish faith. At first the congregation was devoted to Orthodox Judaism, but the congregation was heavily influenced by Reform Judaism after Rabbi Issac M. Wise. After renting and holding services in numerous houses and meeting halls in the downtown Pittsburgh area throughout the late-nineteenth century, the congregation finally financed the construction of the Rodef Shalom Congregation's current synagogue in 1906. Architect Henry Hornbostel used the Beuax-Arts designs accented by colorful bricks and tiles when designing the building. The synagogue was listed in both the Pittsburgh History in 1971 and National Register of Historic Places in the 1979 for its design and its contributions to the Jewish community in Pittsburgh. Later, the Biblical Botanical Garden was added on to the synagogue's perimeters to replicate ancient Israel. Currently, the synagogue has made strides to make the congregation more inclusive, such as implementing the LGTBQ+ Safe Zone and disability services. 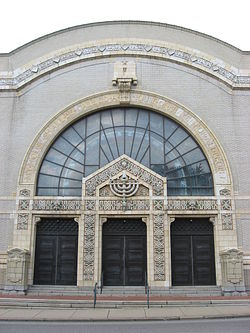 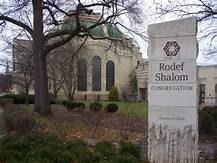 Inside of the Rodef Shalom Congregation and Temple 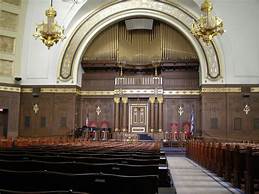 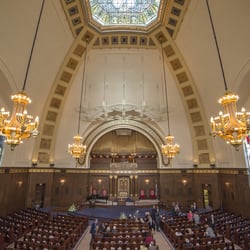 Entryway to the Botanical Garden 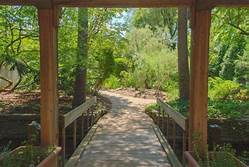 Inside of the Botanical Garden 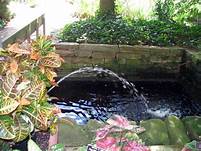 Around the 1804s, a group of Jewish citizens of Pittsburgh who called themselves the Shaare Shemayim ("Gate of Heaven") Congregation. After some time, the congregation renamed itself to the Rodef Shalom ("Pursuing Peace") Congregation. The congregation was first charted in 1856 with the goals of furthering the religion and educate the youth about the Jewish faith. Originally worshipping and following Orthodox Judaism, the congregation soon shifted its focus to Reform Judaism when Rabbi Issac M. Wise came to Pittsburgh and spread the word of progressive Judaism. The congregation began implementing new ideals of the Reform to their services, such as reading the Torah in English, playing organ music during service, making beards and kippahs optional for men, allowing non-kosher diets, and giving women the opportunity to have active roles during the service. Throughout the late-nineteenth century, the congregation rented various meeting halls and houses to hold services, but all of that changed when the congregation financed the construction of their very own synagogue, which was completed in 1906.

The synagogue was deigned by local architect Henry Hornbostel, who was inspired to implement Beuax-Arts style into the synagogue. The synagogue's design is two-fold, a 92 ft. square sanctuary as the center and a rectangular vestibule projecting outward to Fifth Avenue. Provided by Spanish architect Rafael Guastavino, The brick and tile work are hints of cream, yellow, and green, making the synagogue stand out amongst the other buildings. Guastavino and Hornbostel both combined their abilities and styles to design the roof, a double dome structure supported by a Catalan vault structure. There are also large stained glass windows throughout the establishment. As for the interior, the sanctuary is accessible for a capacity of 900 people. The gallery arch above the entrance tunnels light into the sanctuary from the southern window in the vestibule. Four large bronze menorah chandeliers hang from the four corners of this sky light to give measure to the vastness of the sanctuary volume. Later, there were two more additions to the building; one in 1938 and the other in 1952.

From its inception, the Rodef Shalom Congregation had some monumental moments, such as president William Howard Taft visiting the congregation in 1909, making him the first U.S. president to visit a Jewish congregation. At one point, the synagogue held braille services for the blind, marking it one of the first Jewish congregations to provide accommodations to people with disabilities. The synagogue was listed in both the Pittsburgh History in 1971 and National Register of Historic Places in the 1979 for its design and its contributions to the Jewish community in Pittsburgh.

In 1987, the congregation added the Rodef Shalom Botanical Garden in the perimeters of the property. The garden is supposedly a replica of ancient Israel, and it has a cascading waterfall, a desert, a bubbling stream, and an imitation of the Jordan, which meanders through the garden from Lake Kineret to the Dead Sea. The garden has approximately plants that are either referred in the Torah (ex. olives and figs) or are Biblically named, (ex. "Moses in the Basket" and "Joseph's Coat"). From July-September, the garden is open to the public who are interested in having a simulating experience of steeping through ancient Israel.