New York’s first subway station opened on October 27, 1904, and was located almost directly beneath City Hall. Elegantly designed with gilded chandeliers and vaulted tile ceilings, this station was the crown jewel of New York's new modern engineering marvel - an underground railroad. The original subway line covered nine miles from City Hall to 145th Street and Broadway. The opening day for the subway saw some 150,000 New Yorkers testing their new form of transit. The old City Hall subway station is no longer in use and is closed to the public, but the station may still be viewed by remaining on the downtown-bound Number 6 Train after its final stop as the train continues and makes a loop before heading uptown. In addition, some of the original skylights can still be spotted by peeking through the foliage in the modern-day City Hall Park. 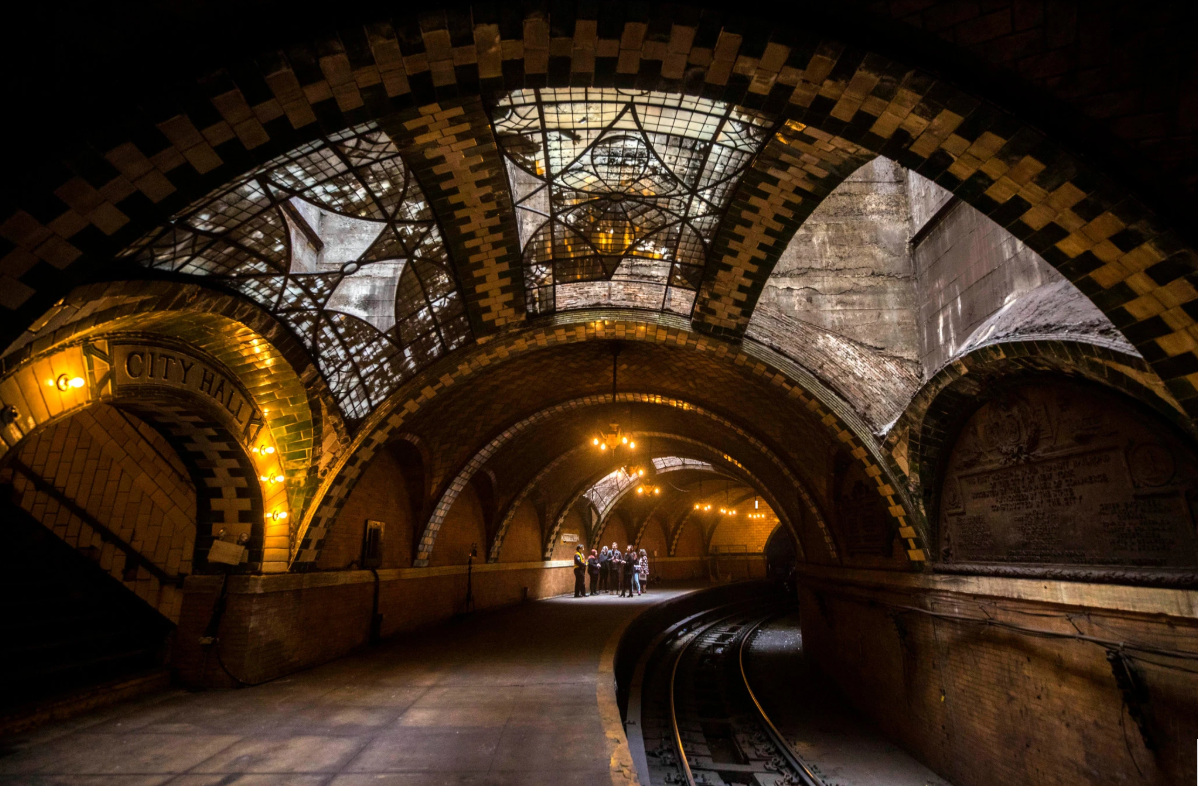 The first subway train to hold public passengers in New York City departed from City Hall station in 1904. This station was designed by architects Heins & LaFarge with vaulted tile ceilings crafted by Rafael Guastavino. Guastavino was a Spanish engineer known for his sweeping arches, a feature that he included in other prominent NYC landmarks such as Grand Central Terminal and the Queensboro Bridge. Heins & LaFarge was a New York-based architectural firm that had previously won the contract for the Cathedral of St. John the Divine among other projects. The station design was influenced by the Beaux Arts movement and the City Beautiful movement. At a time when cities were expanding rapidly and haphazardly, the City Beautiful movement was an urban planning idea which held that beautifully designed spaces were key to creating more livable and orderly cities. The early stations designed by Heins & LaFarge are identified by ornate bas relief plaques and swirling flourishes. They also only worked on the numbered subway lines, as the lettered lines were constructed later.

John B. McDonald won the bid from the City of New York to construct the first subway line at an estimated cost of nearly $34 million. City Hall station was the most elegant of all stations along the Interborough Rapid Transit subway line, featuring elaborate “skylights and ornate Grueby Faience tiles.”(3) Some of the skylights can still be spotted peeking through the foliage in the modern-day City Hall Park. The Interborough Rapid Transit Subway (or IRT) was the first subway company in New York and operated the subway under an agreement with Mr. McDonald. The first subway line ran from City Hall to 145th Street, a distance of more than nine miles, and the fare was only a nickel. According to reports from the New York Times, 150,000 passengers rode the subway on its opening day. The Mayor at the time, George B. McClellan, acted as the conductor for the first subway ride, a ride which departed City Hall and arrived at 145th and Broadway in 26 minutes. In true New York form, almost immediately after the subway was open to the public, advertisers carted large signs down to the subway platforms. Passengers were quick to complain that, “the fine appearance of things was to be marred” and the Mayor commented that the signs, “look very bad.”(7)

Amazingly, nearly 30 years prior to the opening of this subway line, New York City had tested another underground train system. In 1870, the city briefly tested a “pneumatic-powered subway beneath Broadway in Lower Manhattan.” (6) Despite continued interest in alleviating traffic in the City, due to complications in the political and economic environment, any version of the subway project struggled to gain support over the next three decades. In March of 1900, the first actual work began on the subway. Construction continued for four years and seven months. Over the course of construction, 16 men were killed and 125 injured, although this was considered below average at the time for a project of this scale.

The station was closed in 1945 as longer trains came into service and the cost of modernizing the old station, which was built on a tight curve, outweighed the benefits of keeping the station in service . Today, there is only one tour available for those who wish to visit New York City’s first subway station. The tour is operated by the New York Transit Museum and is only available for members – details are available through the link at the end of this entry.

Visitors can also catch a glimpse of the station via the Number 6 Train. Hop on any downtown-bound 6 train and remain on the train after the final stop (Brooklyn Bridge). The 6 train will make a loop after the final stop, passing through this little sliver of the past before heading back uptown.