When considering historic homes in the Virginia Beach and Thoroughgood area, the Thoroughgood House, built circa 1719, tends to take most of the spotlight; however, an even older construction exists in the Thoroughgood area that is rich with tangible history. Built by renowned local Adam Thoroughgood’s son John Thoroughgood,, the Hermitage House is an undeniable point of interest in the Bayside area. The earliest section of the house was erected in 1699, with later additions constructed in  1834 and 1940. The home was added to the National Register of Historic Places in 2008. The Hermitage House is now privately owned. 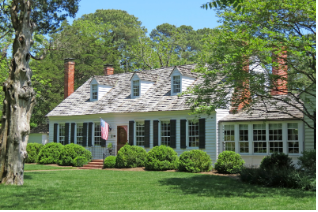 Adam Thoroughgood’s Grand Patent, which gave him more than five thousand acres of land between the Chesapeake Bay and Lynnhaven River, was the setting for the construction of the Hermitage House. One of Adam’s sons, John Thoroughgood, built the Hermitage House in 1699 on a piece of the property that he inherited from his father. It was built in three rounds: the original home, a renovation in 1834, and an addition in 1940. The home, located at 4112 Hermitage Point, is a wood-framed colonial English farmhouse comprising one and a half stories; it has a brick foundation and shaker roof (Virginia Department of Historical Resources). Few changes were made to the house until 1805, when the basement was laid, presumably to function as a rainwater cistern. The house stayed within the Thoroughgood line for an indiscernible amount of time and was eventually sold to the Woodhouse family, who supplied the home with its first major renovation in 1834, adding crown molding, paneled wainscoting, and a central passage (Spillman 38). The property also includes a smokehouse, garage, and dairy house.

The house henceforth had a troupe of notable owners, and the next renovation came in 1940 at the hands of new landlords Ferell and Linda Moore. The Moores added indoor plumbing, as well as an addition with a kitchen, maid’s room, bedroom, and two bathrooms. The Moores maintained the house and its status as a functioning farm until James Collier began to develop the Thoroughgood area into a neighborhood. Collier was president of the Thoroughgood Corporation as well as president of a real estate development company. Collier bought the Hermitage House and the approximate 350 acres of land and oyster coves that surrounded it from the Moores on April 9th, 1955.

The home has since had numerous owners, according to records that are kept in a log by the current landlords, the Littel family. In 1965, Admiral John K. Beling and his wife purchased the house. While he lived there, Beling was the commanding officer on the USS Forrestal, making him a notable owner. At the time of their ownership, the Virginian Pilot highlighted that the “fireplaces in the living and dining rooms seemed to have been hand-cut with a pocket knife” (Spillman 39). In 1977, the Hermitage was sold to Michael and Mary Frances Wasteneys, who actually opened it for a public tour with hopes to generate proceeds to support the Virginia Beach Pops Symphony.

The natural area surrounding the Hermitage House also holds a lot of history. As listed on the Hermitage House’s National Register of Historic Places Registration Form, the property was a working farm until James Collier combined it with other farms in the area to create the “first modern residential neighborhood in Princess Anne County,” now called Virginia Beach. Until this development in 1954, the entrance (which was nearly two miles long) was lined with cedar trees and lilac bushes (Virginia Department of Historical Resources). The Virginia DHR also cites that “the property retains” various cedar trees, black walnut trees, and an old dogwood; also noting that “at least two of the trees are believed to be older than 200 years” (Virginia Department of Historical Resources). An article in The Beacon from 1979 claimed that the walnut trees “still [produced] nuts,” as well.