The Carnegie Library of Eau Claire, Wisconsin was built at 217 South Farwell Street in 1903 after a generous gift of $40,000 from Andrew Carnegie. The library remained at that location until 1976 in which it moved to Eau Claire Street. The old Carnegie Library was then combined with the adjacent City Hall and renovations were done over the next couple of years. In 1981, the Carnegie Library was listed on the National Register of Historic Places. Forever a landmark of Eau Claire, Wisconsin, the building went under more renovations in 2019 with keeping the preservation of history intact. 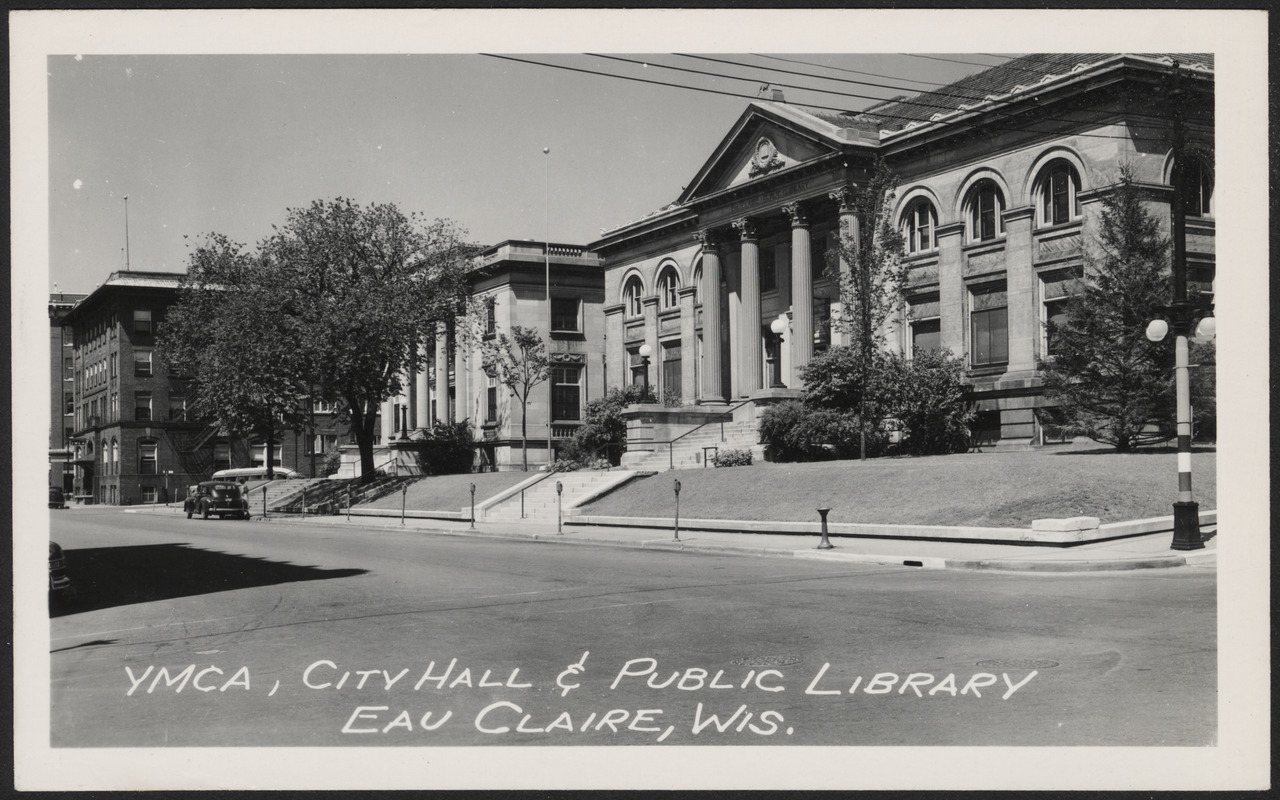 Construction of the new library began in April of 1903 by Patton & Miller, who were architects from Chicago who were widely known for their work with libraries and other buildings of importance as well as Hoeppner & Bartlett. Bedford Stone (both blue and buff) was chosen to be used on the building. The blue Bedford Stone was used on the lower walls and for the building steps. The rest of the building contained the buff stone. Workers began clearing the land on April 16th, 1903.

Exactly two months later, on June 16th, 1903, a ceremony was held when the corner stone of the library was laid. This stone was etched with the year of 1903 and placed in the southwest corner of the lot. The stone was made from Bedford and was 16” x 12” x 24” and contained a small slit of 6” x 5” x 9” in which one could slip documents of importance to be forever one with the building itself. The documents included a picture of the building, copies of the letter written by Carnegie, specifications, state library laws, local papers and library reports. Lists of civic officers and the library board were also included. The ceremony itself encompassed an address by W.J. Starr, President of the Library Board, benediction by Rev. Father Dunne, and music by a double quartette.

After much work over the time frame of 1902-1904 in which work began on calling to notion a need for a new library, requesting a financial gift from Andrew Carnegie, choosing a new home for the library, and construction of the building itself, the library finally opened on Thursday, April 21st, 1904.

The Eau Claire Public Library remained at the location on Farwell street until 1976 in which it moved to the current location on Eau Claire street. The 72 year old building was declared a landmark of Eau Claire in the same year. The Carnegie building remained vacant for another two years as the City Council debated on what to do with it.  In 1981, the building was nominated and accepted to be placed on the National Register of Historic Places.

In April of 1978, the council reviewed the final plans for remodeling the vacant building and combining it with the adjacent City Hall. In May of 1978, an advertisement was put out in the Eau Claire Leader Telegram inviting contractors to come and bid on the remodeling project with separate bids for more specialized work, like carpeting, plumbing, heating, and electrical. In July of 1978, the bids were in and the lowest were totaled about $1.5 million which was over the amount that was originally allocated for the project. Bids were revised after Brian Larson, architect from Larson, Hestekin, Smith, Ayres Ltd., shortened their bid by slightly over $200,000. The Council accepted the revised bid and work finally began on the remodeling project. The Carnegie Library and the City Hall were joined by a new building, erected between them. As the buildings were getting remodeled after 1974 by well over 50%, the City of Eau Claire needed to obey the Federal Rehabilitation Act of 1973 and the City Hall was made fully accessible, including a ground floor entrance, wider doorframes, ramps, and an elevator. In 2019, the City Hall went under more renovations but with the preservation of the two historic buildings at top priority.

Downtown Eau Claire is situated at the confluence of the Eau Claire and Chippewa Rivers. The area was originally frequented by Ojibwe and Dakota tribes and was later explored by French and English fur traders during the mid-eighteenth century. The downtown area evolved since the first permanent settlers of the mid-nineteenth century and developed into a central location for the community to work, settle, and gather. Eau Claire, being located on two rivers, has a long history of providing natural and curated public spaces for a growing community. Some of the most notable additions to the downtown and riverfront areas include the Uniroyal Tire Factory, Phoenix Park, and the State Theater. (This project is made possible in part by the National Endowment for the Humanities: Coronavirus Aid, Relief, and Economic Security (CARES) Act.)