The Bunker Hill Covered Bridge was originally constructed by Andrew Loretz Ramsour in 1895. The design of the bridge is based off of General Herman Haupt's 1839 patent for the Improved Lattice Bridge, and the bridge is notable for being the sole surviving wooden example of this design. Additionally, the bridge is one of two covered bridges that have survived in North Carolina. The bridge was placed on the National Register of Historic Places in 1970 and was deemed a National Civil Engineering Landmark in 2001. Since 1985, when the bridge was donated to the Catawba County Historical Association, efforts have been made to preserve and restore the bridge, and the bridge is temporarily closed for further repair work.

The Bunker Hill Covered Bridge on a beautiful autumn day 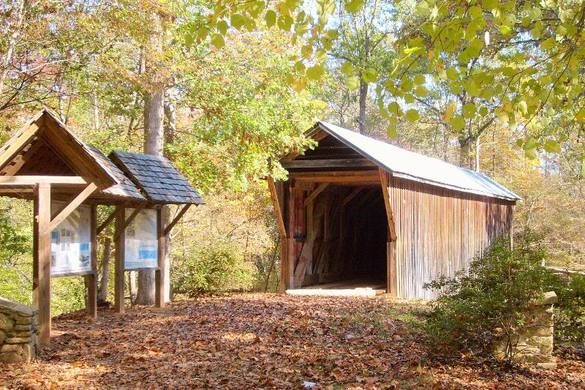 Brigadier General Herman Haupt (1817-1905) was Chief of Military Railroads for the Union Army during the Civil War. Haupt, a Philadelphia born civil and military engineer, author, professor, inventor, and industrialist, patented the Improved Lattice Truss pattern in 1839, which was the source of inspiration for the design of the Bunker Hill Covered Bridge. Andy Loretz Ramsour (1817-1906), one of the co-founders of the Piedmont Wagon Company, saw the design in a book and built the bridge that crosses Lyle's Creek in 1895. The Bunker Hill Covered Bridge is notable for being the only remaining wood example in the Improved Lattice Truss design, and is only one of two remaining covered bridges in North Carolina, the other being the Pisgah Covered Bridge in Randolph County, which was constructed in 1911.

The bridge was covered in 1900 with a ninety-one feet long roof, and the original wooden shingles were replaced with a tin roof in 1921. In 1928, part of the bridge was sold to Rena Huitt Bolick for $400. The Bolick family donated the bridge to the Catawba County Historical Association in 1985 to preserve the bridge. The bridge was restored in 1994 with the expertise of Arnold M. Graton, a master bridgewright from Ashland, New Hampshire. In 2001, the bridge was deemed a National Civil Engineering Landmark after being placed on the National Register of Historic Places on February 26th, 1970.

In 2019, the bridge was closed in order to repair the bridge's abutments and will remain closed until further notice.