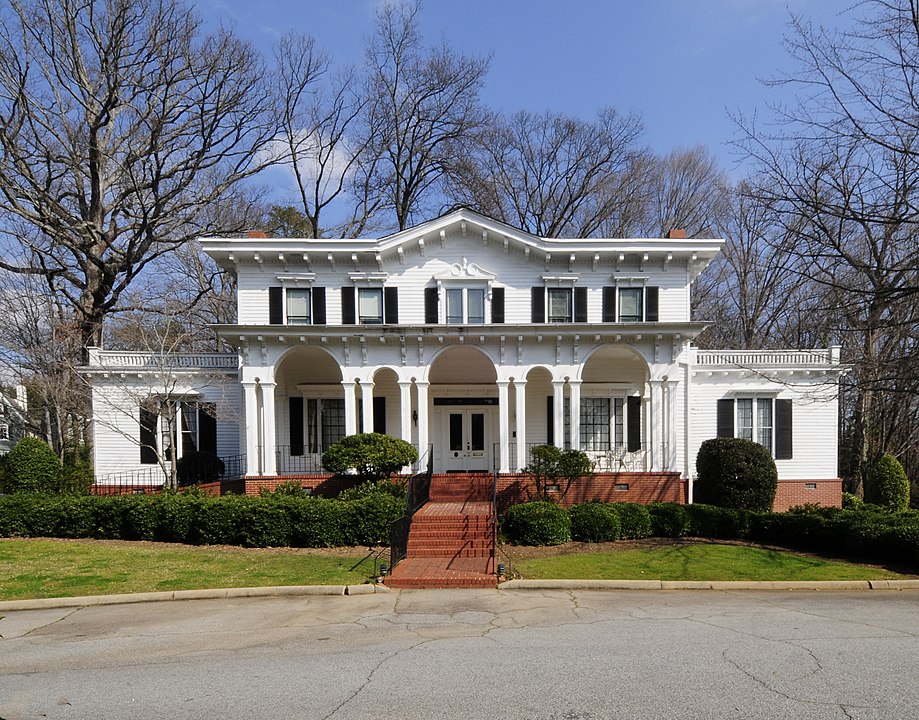 Fountain Fox Beattie and his bride, Emily Edgeworth, married in Greenville in 1832. The 27-year-old Mr. Beattie had this home built for the couple in 1834. The house originally stood on East North Street a few blocks south. The original part of the house was much simpler than the present structure. Mr. Beattie worked as a textile merchant.

Mr. Beattie served in the Confederate Army during the Civil War and spent some time in a Virginia prison with the infamous John Singleton Mosby of the guerrilla group Mosby's Rangers. Captain Beattie aided in the capture of a Union supply train near Catlett, Virginia by supplying a howitzer used to shoot at the engine, derailed by a missing rail. Mr. Beattie died in 1863; it is not clear if he died in battle, because of war injuries, or of other causes.

Fountain Fox Beattie had four children, and although none were named Fountain Fox, the unusual moniker reappeared for descendants in 1878 and 1913. A need for more space led to a number of wings being added to the house, although construction dates are uncertain. Architectural clues suggest that some of the additions and decorative elements were added before the Civil War, when the Italianate or Tuscan Villa style was popular, although these elements had a resurgence in the 1880's. The two-storied central portion of the house had one-story wings added to either end. The one-story central piazza is supported by six pairs of square columns with archways giving the main facade a Palladian feel. The upgrades are attributed to Hamlin Beattie, a son of Fountain Fox who was born in 1835. Hamlin was already a successful merchant in town by the 1860's and founded the National Bank of Greenville in 1872. The Fountain Fox born in 1878 earned a law degree and served as president of this bank; he served in the South Carolina House of Representatives in 1907-1908.

The home served as the abode for generations of Beattie's, up to the death of Mrs. John Beattie in 1938. The family rented out the house until the mid-1940's. Construction of a government building was planned for the site and the house was threatened with demolition. The Greenville Woman's Club intervened and asked the city to save the home and restore it. The Beattie house was moved by the city to 1 Beattie Place. The structure's interior was renovated and modified in 1948 into large meeting rooms and the building was leased by the woman's club from the late 1940s to 2014. The house on less than one acre of land was listed in the National Register in 1974. The property's significance is due to its architectural style and the lack of many other antebellum structures still standing in Greenville.

The Fountain Fox Beattie House stood just around the corner from its present location between Bennett and N. Church Streets at that time and was moved a short distance when highways were expanded. The city held a competition and received proposals for possible uses of the house. A couple with young children was chosen to purchase the house because they wanted to make the building into a private home once again. The new owners are restoring the home within historic preservation easements. The house is not open to the public.