The Francis Scott Key Monument is located in Baltimore, Maryland on the corner of W. Lanvale Street and Eutaw Place. The Francis Scott Key Monument is a large monument placed in the heart of Baltimore City. Its main purpose was to commemorate and remember Francis Scott Key, the writer of the Star Spangled Banner, otherwise known as America's national anthem. The monument, which was vandalized in September 2017, still remains standing with a 6-foot high chain-linked fence surrounding it. This is despite several other confederate monuments being removed throughout the city following the Charlottesville, VA violent Unite the Right protest.

The Francis Scott Key monument located in Baltimore, Maryland prior to the vandalizing that took place in September 2017. You can notice how large and well put-together the monument is. Somebody spent a lot of money and time to get this monument built. 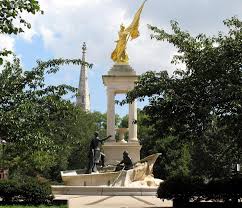 The Francis Scott Key Monument is extremely accessible to the public. It sits in the middle of a predominately African American neighborhood and can be seen from any angle. 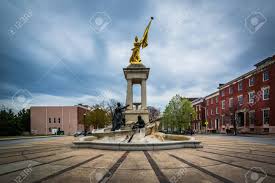 The words “Racist Anthem” were spray painted across the base of the monument in September 2017 following the Charlottesville attacks. The vandalizing took place overnight. The vandalizing was a method for the African American community to express their disagreement in having a monument commemorating a former slave owner in their city. 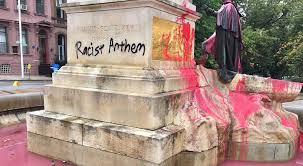 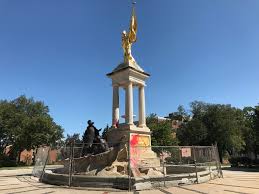 Francis Scott Key was born on a Frederick County, Maryland plantation to upper-class parents whom benefited greatly from chattel slavery. He was a highly respected Maryland lawyer and former slave owner himself, and is the author of the Star Spangled Banner, otherwise known as America’s national anthem. He innocently perched out on his boat in the Baltimore Inner Harbor on the night of September 13th, 1812 overlooking the bombardment taking place at Fort McHenry when he wrote The Star Spangled Banner.

In 1907, nearly a decade after Key wrote The Star Spangled Banner, then Baltimore resident, Charles Marburg, gave $25,000 to his brother, Theodore, to commission a monument to his favorite poet, Francis Scott Key. Nearly five years later, The Francis Scott Key Monument was unveiled to the public on May 15, 1911. The sculptor responsible for this project was France native, Jean Marius Antonin Mercie, known for monumental sculptures of Robert E. Lee (1890) in Richmond, Virginia and General Lafeyette (1891) in the District of Columbia.

In 1999, then First Lady, Hillary Clinton, spoke at the monument on the importance of renovating and preserving America’s historical monuments. Several years later in April of 2015, Freddie Gray, a Baltimore African American 25 year-old man, was wrongfully arrested and killed under police custody. This, along with the Charlottesville, VA violent Unite the Right protests in the summer of 2017, sparked the Black Lives Matter civil rights movement in an effort to expose the controversy behind a flawed a corrupt governmental system.

Following the Charlottesville violent protests, then Mayor of Baltimore City, Catherine Pugh, stated that it was "in the best interest of my city" to remove several confederate monuments around the city overnight, however, decided to not remove the Francis Scott Key Monument. Nearly a month following this decision, Baltimore City Department of Recreation and Parks workers discovered that the monument had been splattered in bright red paint along with the phrase “Racist Anthem” spray painted in black on various areas of the monument.

The vandalism of the monument is part of a broader social movement that took place within the city that Baltimore residents believe should be exposed. Advocates for the Black Lives Matter movement expressed their frustration with the presence of a monument that commemorates a former slave owner through this nonviolent direct action. Supporters of this action stated that “tearing down monuments” is linked to “tearing down systems” that maintain white supremacy.

Johnson, M. (2016, September 3). Let's take the national anthem literally, and the songwriter at his word. Retrieved from https://theundefeated.com/features/lets-take-the-national-anthem-literally-and-the-songwriter-at-his-word/.