Below is the essay that explains the Presidential importance of Independence hall specifically through the lenses of George Washington's presence at the Constitutional Convention and how potentially influenced the American Presidency. This will cover the attributes of Washington that were most desired, especially for his role as the US President and how these characteristics changed the process of what was written in the US Constitution about the US President. 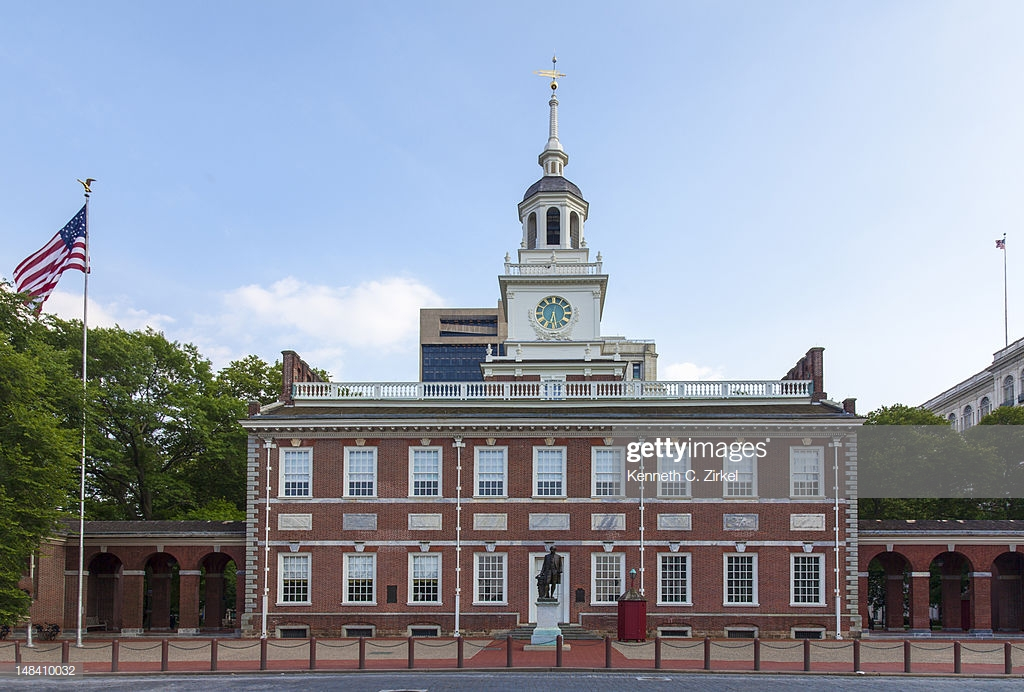 Scenes at the Signing of the Constitution of the United States 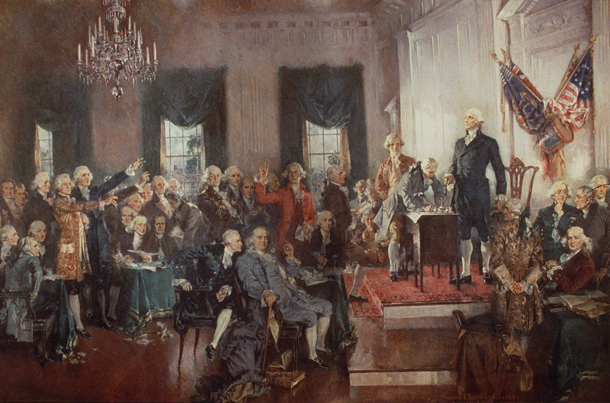 The Constitutional Convention, held at Independence Hall has been kept very secret and only a few unofficial records were ever found. Leading up to the Constitutional Convention it became more and more clear that the current form of government was not working and something new needed to be done. As influential Founding Fathers began preparing for a convention, Washington was heavily persuaded and coaxed into attending by James Madison and General Henry Knox. Washington’s presence both became a symbol of authority, and trustworthiness which would lead to a broader acceptance of the soon-to-be US Constitution. Washington was unanimously elected the President of the Convention as discussion birthed the new model of government. Washington was the one character who would have been able to rally such a wide diversity of ideologies at the Convention so he was naturally chosen as they began.

Once a three branch, national government was decided upon, and the concept of a President was vaguely formed to lead the Executive Branch, George Washington became the clear choice for the First US President in history. Because of this, it can be assumed that Washington’s personality, trustworthiness, strong character, and ability to resist the corruption of power almost certainly influenced how the US Constitution defined the Presidential Office. Since Washington’s trustworthy, morally upright persona fingerprinted the second Article of the US Constitution it is bound to have long lasting effects on the United States Presidency.

One of the influences Washington’s presence had was leaving much of the duties of the US President open to interpretation, and presuming the strong morals and trustworthiness of any US President. Part of this included being the Commander in Chief of the Army and Navy. This complete control over the armed forces would have certainly been in the wheelhouse of former General George Washington. It is possible that this power would have been given to the US Presidential office anyway, but with Washington present, there would have been little to no hesitation about giving the US President complete agency over the Armed Forces.

It is only in Section four, a mere one sentence that speaks of serious restriction and consequential action toward the US President. This, I believe is the largest influence Washington’s presence at the Constitutional Convention had on the US Constitution and therefore the American Presidency. Washington was an extremely well respected, strongly admired American legend and with this there seemed to be little to no concern of Washington ruling by tyranny. For this reason, the “Do nots” for the Presidency based off the Constitution strictly are rather short and certainly vague. This most likely was again, because of a lack of concern that George Washington would abuse his power. At this point in history it can especially be seen since Monarchies were the standard government model, and the United States clearly strayed from this, so in uncharted territory it would make sense to establish a good deal of structure. In this case, with Washington however, there was less structure than what may have been necessary in the US Constitution otherwise.

The list of “Do-nots” consist of “Treason, bribery or other high crimes and misdemeanors”. This list is short with only four items, nevertheless the last two are abundantly vague and allow for redefinition and wiggle room that lasts throughout the ages. It seems that this quick, final section of Article 2 highlights two major trends. The first is that the Founding Fathers presumed the person in office would be very trustworthy and considerate off the extreme responsibility and power in the Presidency. This trust leads to only two well defined barriers for the US President. The US President cannot commit treason, and they cannot commit Bribery. Obviously there are plenty of things the President is required to do but the US President is fairly free to do those things(within reason) as they see fit, so long as treason and bribery are not committed and there is not a case for high crimes or misdemeanours by the general definition of their time. It is also worth mentioning that other checks and balances were woven into the US Constitution and do restrain the US President. Regardless, to give this amount of freedom to one of the most powerful offices requires great trust in the individual that will find their way to the office through the process of election. Other factors that may influence how they wrote the US Constitution include that the electoral college will protect the nation from itself should the active voters choose a poor candidate. Ultimately, it seems that Washington’s trustworthiness and character played a large part in the formation of the Constitution and therefore the US Presidency as it was conceptualized.

This section four not only presumes the lack “do nots” for trust in Washington and further US Presidents. The US Constitution also assumes that the US President will need and be able to effectively use the freedom given to them as the Head of the Executive Branch and the leader of the nation in many ways. George Washington was placed in charge of the entire military during the Revolutionary war and with this he came out rather successfully after 8 long years. With this amount of freedom and lack of restraint, he managed to do considerably well. There is no doubt with that of great financial, and casualty cost however America had successfully fought off the largest army in the world and become its own nation. This display of “beating the odds” due in part to his freedom as the leader of the militia showed the vast capability of a good, strong leader with a great deal of freedom and because of Washington’s presence could easily have influenced the US Constitution in defining a US President.

In conclusion, the United States Presidency was certainly influenced by the admirable personalities of George Washington and his presence at the Constitutional Convention in Independence Hall. As George Washington and the other Founding Fathers created the US Constitution in Independence hall it influenced and created many things, one of them being the American Presidency.

“George Washington and the Constitution.” Center for the Study of the American Constitution. Accessed December 4, 2019. https://csac.history.wisc.edu/document-collections/george-washington-and-the-constitution/.

“When Did The Revolutionary War End?” History, January 31, 2019. https://www.historyonthenet.com/when-did-the-revolutionary-war-end.

Chandler Christy, Howard. Scenes at the Signing of the Constitution of the United States. 1940.