For decades in the late 19th and early 20th centuries, the boll weevil destroyed farms and crops in the southern United States. Originating in Mexico, the pest had slowly made its way to southern Alabama. But in the early 1900s, the boll weevil was being named the Herald of Prosperity in Enterprise, Alabama. The Boll Weevil monument is a statue dedicated to the versatility and adaptability of farmers in Southern Alabama. The plague of insects that came to Enterprise during the 1910s was a certain death sentence to the cotton crop there. However, with the aid of George Washington Carver, the farmers in the area were able to adapt and diversify their crops, thus saving the farming economy of the region. The boll weevil monument is situated at 101 Main St, Enterprise, AL 36330 in the middle of the intersection of Main and West College Street. Built in 1919, it depicts a 13-foot-tall woman holding a roughly 2-foot-long boll weevil above her head. With a plaque to commemorate the insect, it is the only monument on earth dedicated to a pest.

This is the monument at its first unveiling on December 11, 1919. 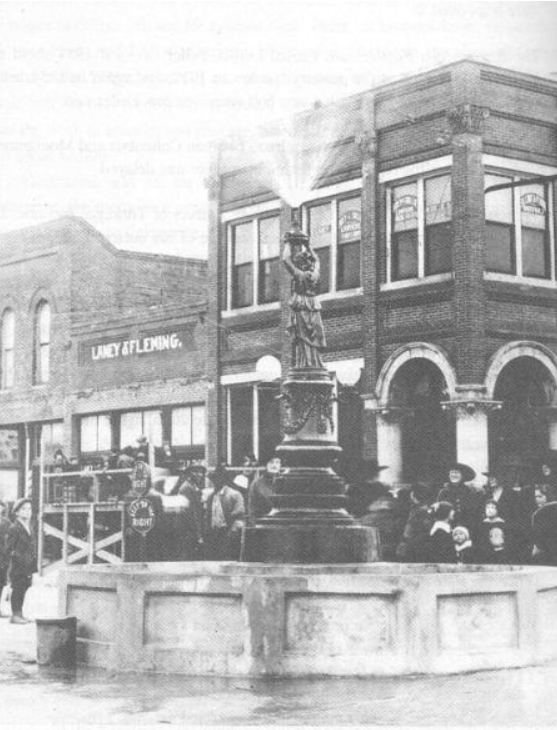 This is the monument as it stands today in the middle of the intersection of W. College Street and Main Street. 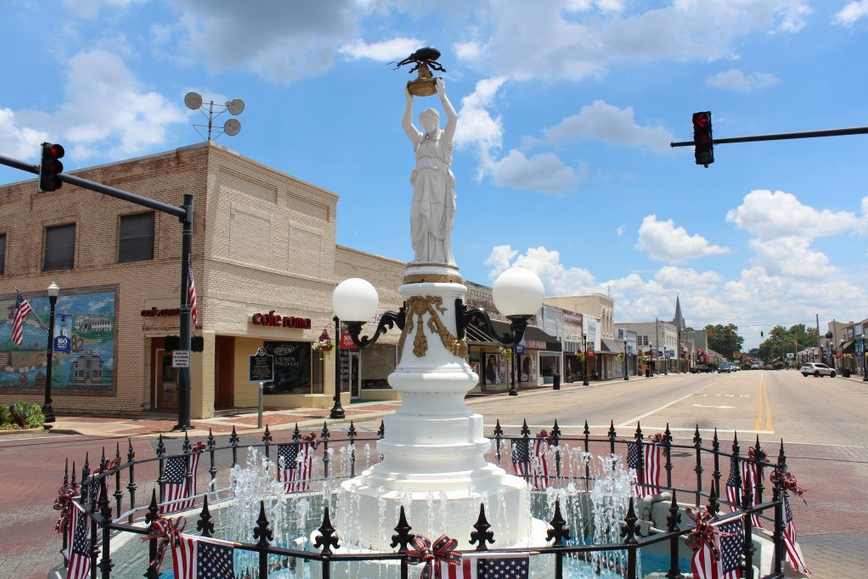 This is an example of the boll weevils that infect cotton crops across the south. 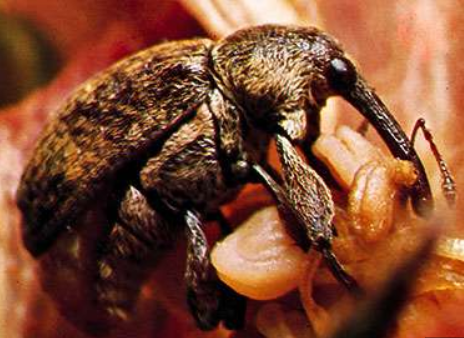 This is the plaque that stands nearby commemorating the boll weevil’s ability to make farmers diversify their crops. 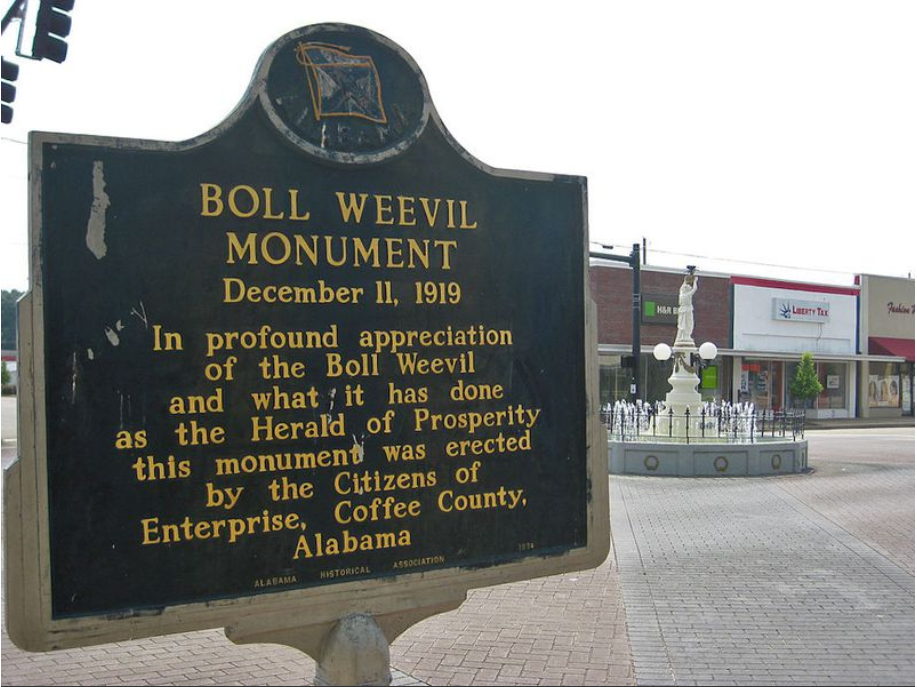 This is a picture of what the monument looked like just before the boll weevil statue was added to the top of the statue. 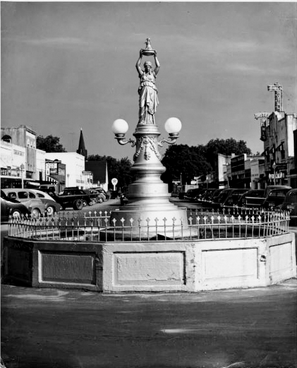 The boll weevil insect is a beetle and known as a cotton pest in North America. The size of mature boll weevils can vary, but is generally about six millimeters, or one fourth of an inch. The curved snout on the front of the insect compromises about one half of its total length. Boll weevils awake in the spring from being dormant through the winter and slowly change from a yellow to a black or grey color. Female boll weevils will deposit between 100 and 300 eggs in a cotton bud. The larva will live in the cotton bud for two to three weeks and completely destroy the seeds as well as the cotton fibers. Because the larvae inhabit the inside of the cotton plant, insecticides are useless to remove them. As many as ten generations of boll weevils may be born in the cotton growing season, lasting from May until December.

The boll weevil pest originates in in Mexico and is widely feared throughout agriculturally based regions of North America. In 1892, the boll weevil migrated north across the Rio Grande River into cotton growing areas in Texas. The insect moves quickly and is known for its ability to fly large distances quickly. Boll weevils have been found 150 miles from where they were originally tagged. By 1909, the boll weevil had reached western Alabama. By 1915 the pest was infecting Coffee County, where the city of Enterprise is located. Almost 60 percent of the cotton crop for that year was destroyed and pesticides were useless to stop the destructive boll weevil. The cotton crop was a way of life for southern farmers and to see it destroyed so quickly was a death sentence for their culture.

Alabama farmers in the area looked desperately for a solution to the boll weevil that had destroyed an important facet of the local economy. Warren Hinds, a state employee in the field of entomology, began distributing pamphlets directing farmers on the best ways to save their crops from the pest. Hinds advocated for the immediate diversification of crops. The area around Enterprise had two types of soil: black soil and wiregrass. The black soil was where the cotton was grown, as the wiregrass did not have sufficient nutrients necessary for cotton. The wiregrass was perfect for another type of crop, however: peanuts. George Washington Carver was the head of the agriculture department at the Tuskegee Institute at the time and encouraged the growth of peanuts as the new cash crop of the region. He claimed that even if there was too high a supply of peanuts, the farmers could turn the excess into feed for livestock as well as milk, butter, and lard. Farmers were still skeptical of how this new crop could save their livelihoods.

In 1916, farmer C. W. Baston owed money to a banker in Enterprise, and as his cotton crop was destroyed, he gave peanuts a try in the wiregrass soil. He turned that experiment into eight thousand dollars from the banker and soon become the stuff of local legend. The crops grown in the area switched from almost exclusively cotton to peanuts overnight. The wiregrass soil, thought useless for years, had come to save the livelihoods of the Enterprise farmers in the end. As other farmers in the area struggled, Enterprise had beaten the threat of the boll weevil with diversification of the crops they grew. Cotton went back to making up a predominant amount of the town’s crop yield, but from then on, the farmers did not rely solely on cotton and instead farmed a variety of crops that diversified the area’s economic output. The monument in Enterprise is not a monument to the boll weevil, rather it is a reminder of the people of Enterprise’s resolve and unwillingness to fold to the boll weevil’s destructive path.

In the beginning, the statue was just the woman with her arms above her head. In 1949 the boll weevil statue was added. For years, the statue was the target of frequent vandalism. The original versions of both the woman and the boll weevil are no longer there. The original boll weevil was stolen by a rival football team, although some sources have suggested it was stolen by soldiers who took it with them to Korea. The woman was damaged irreversibly in 1998 by vandals. Both features in Enterprise today are replicas of the original versions. Today the fountain the woman stands in is frequently overloaded with laundry detergent by rival sports teams.

Boissonault, Lorraine. “Why an Alabama Town Has a Monument Honoring the Most Destructive Pest in American History.” Smithsonian.com. May 31, 2017. https://www.smithsonianmag.com/history/agricultural-pest-honored-herald-prosperity-enterprise-alabama-180963506/.

Nosowitz, Dan. “The World’s Only Monument to a Horrible Destructive Pest is in Alabama.” atlasobscura.com. May 29, 2015. https://www.atlasobscura.com/articles/boll-weevil-monument-alabama

Hulbert, Dan and Harper, Marquez. “The Bug is Back in Town.” The Atlanta Constitution, August 6, 1998.

Fleming, Roscoe Owen. “The Boll Weevil Monument: The Only Monument in the World Dedicated to a Pest, 1919.” Georgia’s Southern Depository. http://www.flemingmultimedia.com/Personal/CSA/monument.html (December 12, 2019).

Boissonault, Lorraine. “Why an Alabama Town Has a Monument Honoring the Most Destructive Pest in American History.” Smithsonian Magazine. https://www.smithsonianmag.com/history/agricultural-pest-honored-herald-prosperity-enterprise-alabama-180963506/ (December 12, 2019).