Gavins Point Dam sits on the Missouri River on the border of South Dakota and Nebraska. It was constructed in 1957 by the US Army Corps of Engineers as a part of the Pick-Sloan Plan. The goal of the plan was to prevent flooding along the Missouri River, which has proven to be very difficult. The Pick-Sloan Plan was put into place after the flood of 1940 which destroyed farmland, businesses, and housing along the river. While the dam has had a positive impact by creating Lewis & Clark Lake and providing hydroelectricity to surrounding houses, there have been some negative consequences. The building of the dam led to the displacement of Native Americans and the flooding along the river that continues today.

The map shows all the dams that were built by the US Army Corps of Engineers as a part of the Pick-Sloan plan within the Missouri Basin. 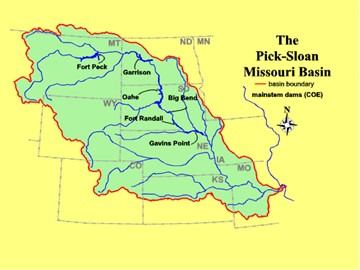 These maps show how drastically different the Pick and Sloan plans were and how one couldn’t settle with the other’s plan. 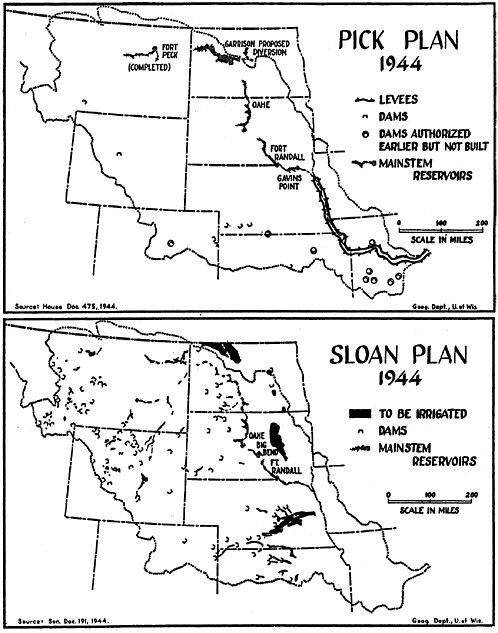 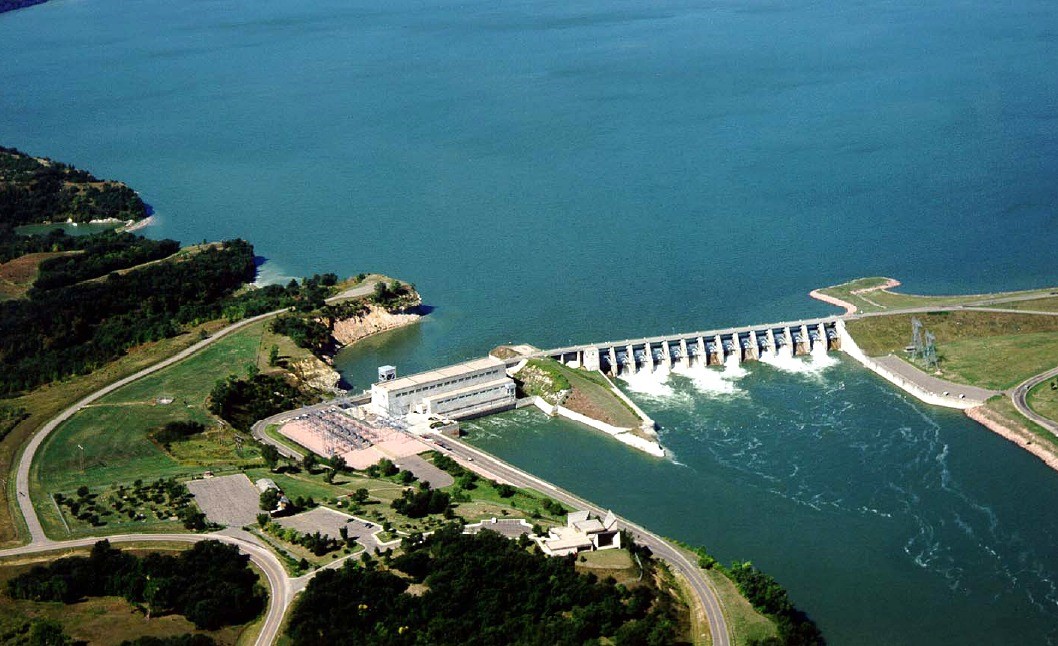 In 1940, a major flood along the Missouri River caused the lower states along the river to call for action about controlling water flow along the river. The flood of 1940 wiped out all farmland along the Missouri River due to excessive amounts of water being discharged from the existing dams with nothing to break up the destruction. This prompted the creation of the Pick-Sloan Plan to prevent flooding along the river. The Pick-Sloan Plan was a merge of the Pick Plan and the Sloan Plan, which were created by two different groups of people along the Missouri River in order to benefit the needs of their region. Gavins Point Dam was built by the US Army Corps of Engineers in 1957 in response to the flood of 1940 and the Pick-Sloan Plan. It is a hydroelectric dam that provides energy to the neighboring cities that also holds in Lewis and Clark Lake, which is home to Lewis and Clark Park, a famous recreational park in the area.

The need for additional dams along the Missouri River came as a result of the ineffective flood control from Fort Peck Dam, which managed flooding in the lower half of the Missouri River Basin. The Fort Peck Dam was ineffective during the 1943 snow melt because it could not contain the runoff from the watershed, and subsequently flooded the Missouri River, particularly flooding manufacturing plants that were creating military supplies in WWII (JSWC). This led to two the creation of two plans, the Pick Plan and the Sloan Plan, as a result of not being able to come to a compromise on what the plan should accomplish. The Pick Plan was created by the US Army Corps along with the lower Missouri River basin states with the intent to build four major dams with some re-regulating dams below them to prevent destructive surges from traveling down the river as water was released. The re-regulating dams were included to decrease the damage caused by large discharges from the upstream dams. The Pick Plan’s main goal was to provide flood control and navigation for the lower basin states. This plan would also produce incidental irrigation and hydroelectric power, which the upper basin states wanted, but did not satisfy them to the extent that they desired. The Sloan Plan was created by the Bureau of Reclamation and the upper Missouri River basin states to focus on providing irrigation and hydroelectric power to the upper basin states to help with droughts that were occurring at the time. Finally, a compromise was reached between the two plans, which became known as the Pick-Sloan Plan, and the location of the dams had to be determined.

Proximity to cities, river width and depth, and population along the river were considered when choosing the location. All of these were important factors as it was the late 40’s early 50’s and the workers needed places to live, easy access to electricity, and efficient ways to transport construction materials to the locations of the dams. As the Missouri River States Committee was selecting the location, they traveled from town to town proposing plans on how taxes would fund the building of the dams in the Pick-Sloan Plan. However, they neglected to include the Native Americans living along the river in these discussions.  The committee knew that the Native Americans would not receive anything from the plan nor be able to contribute to the building of the plan. Eventually the location was determined, and some Native Americans were forced from their land.

The completion of the dam in 1957 did have a positive impact. Lewis and Clark Lake, which is now home to Lewis and Clark Park, was constructed due to Gavins Point Dam holding water at that point in the river creating a lake. Lewis and Clark Park, surrounding the lake, contains an abundance of recreational activities including disc golf, camping in tents or cabins, swimming and boating, fishing, and much more. The lake was named Lewis and Clark Lake because the lake sits along the path that Lewis and Clark explored in 1803 while trying to find a water route to the Pacific Ocean.  Another positive impact resulting from the construction of Gavins Point dam was hydroelectric power created from the water passing through its generators. This produces approximately enough electricity to meet the needs of 68,000 homes annually (USACE).

However, there have been some negative things that have been a result of the construction of Gavins Point Dam. There has been flooding downstream as a result of the dam not being large enough to handle flood waters. Gavins Point Dam was built as a re-regulating dam for Fort Randall Dam, meaning it was constructed to handle the large discharges from Fort Randall Dam. This is a problem however, because Gavins Point Dam does not have excess capacity beyond the lake level. The dam cannot contain the large amounts of water being released upstream causing most of the water has to be released from Gavins Point Dam. One major flood that occurred as a result of Gavins Point Dam not having enough capacity was the flood of 2011.  The flood of 2011 was caused by the record amount of snowfall in the winter and rainfall in the spring in the Rocky Mountains and central and eastern parts of Montana. The National Weather Service described the amount of rainfall in May of 2011 as “equivalent to almost a year’s worth of rain over the upper Missouri River Basin.” Due to this, the release of water caused the Missouri River to flood from June to August affecting all land surrounding the river.  This resulted in the loss of crops, homes, and some lives.

Another negative impact was the displacement of the Native Americans. Before the dams within the Pick-Sloan Plan were built, Native Americans lived along the Missouri River and used it in their everyday life. However, after the dams were built, the Native Americans not only lost the use of the river but also their land. The massive lakes, created to store water for irrigation and supply flood control, washed out the shores of the existing river where the Native Americans were living. The construction of these dams, including Gavins Point Dam, affected Native Americans living on Crow Creek, Lower Brule, Cheyenne River Sioux, Standing Rock, Fort Berthold, Yankton, Rosebud, and Santee reservations. Some groups lost parts of their acreage to the water whereas others lost all their land and were forced to relocate. It is said that approximately 3,538 Native Americans were forced to relocate off their reservations and another 6,900 were affected in some way or another (Schneiders). This is a large number of people for the government to not consider when implementing a plan that will drastically change their lives and livelihood.

The construction of Gavins Point Dam changed the landscape of the Missouri River to as we know it today. The displacement of Native Americans along the Missouri River and the flooding of the river causing damage to surrounding areas have negatively impacted the people and land. The creation of power through the generators of the dam and the creation of a lake for recreation use have positively impacted the drainage basin. This dam leaves a mark of discussion as to whether the committee should have left the Native Americans out of the decision to build the dam even if it was to impact them the most. The continued flooding, just like in the 1940’s also leaves the question, “Was the dam really worth all the trouble to build or is it too small for today’s climate?” Today, Gavins Point Dam is seen as a place of fun and recreation and a place of destruction. It created a beautiful recreation area, yet it also created destruction along the Missouri River leading to the loss of farms, crops, and homes for those living along the southern half of the river.