Daniel Newnan was born in North Carolina in 1780 and he is the son of Dr. Anthony Newnan. He ended up going to the University of North Carolina and then became a second lieutenant in the infantry regiment for the United States Army. After three years of serving for the United States Army, he resigned and moved back to Georgia where he received land and slaves. When he got back to Georgia, Newnan was heavily involved in the militia and then four years later he became an adjutant general of Georgia. Newnan made history when he led a fleet of men down to Florida in the summer of 1812.

This is the gravesite of Daniel Newnan and he lived from 1780 to 1851. He went to the University of North Carolina before he joined the United States Army. Newnan led a fleet of about 250 men down to Florida to fight the Florida Indians in the summer of 1812. Newnan and his men wanted to take back Florida from the Spanish and wanted to get revenge on the slaves that were fleeing from their Georgia owners. Newnan and his men camped in triangles and slept in uniform because if they were attacked at anytime they would be ready to fight. The Army survived the first fleet of the Indians but things did not go their way in the second battle so they had to retreat. Upon the retreat, there was little food and sickness was going around so Newnan lost more men while retreating. Before retreating back to Georgia, Newnan sent a letter to his commander stating how good of a commander he was and lied about the outcome of the war. He lied about the outcome of the war because he did not want to mess up his reputation for winning other battles that he fought in. As many years past by, people thought that Newnan was shot by an indian and was buried where he died. This is false because Newnan died of old age in Rossville, Georgia and was then taken back to the Newnan Springs Cemetery. Daniel Newnan’s gravesite can be found right outside of the United Methodist Church in Georgia. 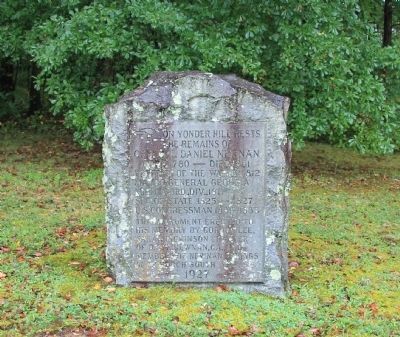 I dropped the pin on the map of where Daniel Newnan's gravesite is located which is right by the United Methodist Church. Daniel Newnan made history when he led 250 Patriots down to Florida because they wanted to take back Florida from Spain. The Patriots were men who were living in the United States who wanted to take Florida back from Spain. Newnan and his men wanted to punish the Florida Indians for inviting and keeping slaves who had run away from Georgia owners. The army camped in triangles and slept fully dressed so if they were attacked they would be ready to fight. While on the journey to Florida, they were attacked twice but luckily they were able to defend themselves.

The controversy behind this story is that Newnan was seen as a war hero after this battle because he sent a letter to his commander stating that they had achieved all of their goals, lost a few men, and bragged about how good of a leader he was in the battle. This was a lie, so what actually happened was in the first battle Newnan's army did only lose a few men when they were attacked during the night by the Indians on the way to Florida but in the second battle they were highly out numbered in Florida. A lot of Newnan’s men died and were badly beaten so they had to retreat back to Georgia. They had to retreat because they lost many men, had no food, and a lot of men were sick. Newnan lied to his commander in a letter after the second battle just before they started to retreat because he did not want to mess up his reputation in the Army. He "detailed the incident in a letter to his commander, which highlighted his skills, greatly exaggerated the number of Seminole deaths, and blamed other officers for some of the problems in Florida" (Coweta, 2014). A few months went by and Newnan was shot three times in a battle in Alabama in which he decided to retire after that.

The last controversy about Daniel Newnan is where he is burried at and how he died. Baker states "there is a cemetery lot next to the church and that is where he is buried. There had been rumors around the town that Newnan was shot by an Indian at that specific spot, but it was false" (Baker, 2019). The community thought he died by the church because his gravesite was right by the church. Newnan actually died several miles East of Rossville, Georgia from old age and his body was taken to Newnan Springs cemetery. They took his body to Newnan Springs Cemetery because he used to visit the cemetery all the time. After his passing, the community decided to name a town and a lake after Newnan. They decided to do this because despite the controversy in the war down in Florida, Newnan had been involved in many other wars in which he achieved victory in.

Revize. A history of Newnan. Retrieved October 7, 2019, from