Strikes at the Kohler Company

The Kohler Company, founded in 1873, has been the site of four strikes throughout its history that took place in 1934, 1954, 1983, and 2015, as a result of disputes over wages, working conditions, and benefits. While the 1934 strike was the most violent, resulting in the shooting deaths of two striking workers, the 1954 strike remains the longest in United States history, with the dispute persisting until a settlement in 1965. The Kohler Company is the focal point of the community, which was constructed as a company town, and the Kohler family has long been a powerful force in state politics, with two Kohlers having served as governors of Wisconsin in the 20th century.

Workers walk the picket line during the 2015 strike

Women hold signs in support of the 1954 Kohler strike 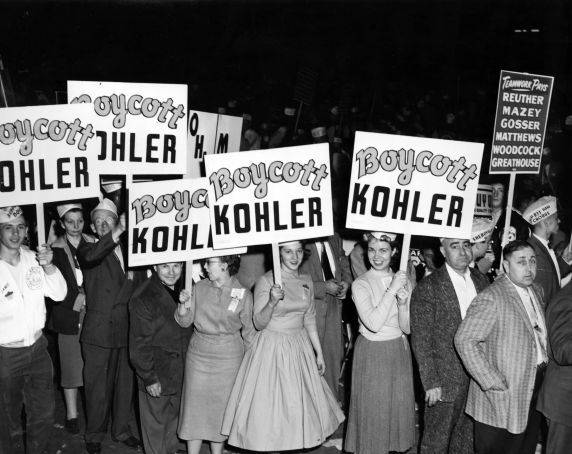 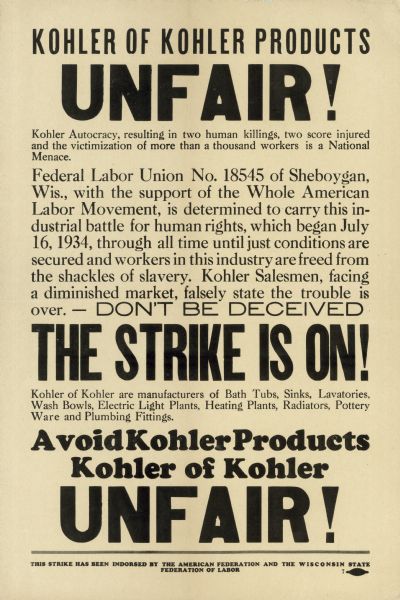 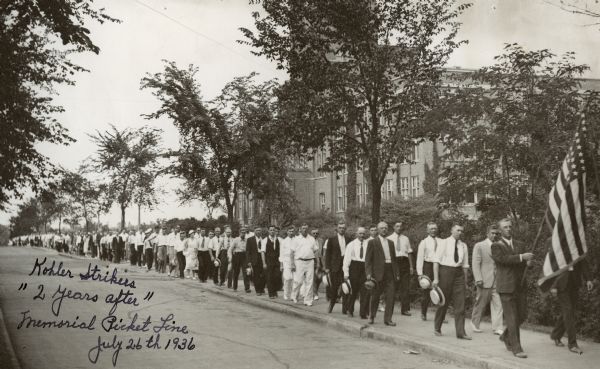 The Kohler Company, an American manufacturer of plumbing products and bathroom fixtures, was founded in 1873 by John Michael Kohler II. Originally located in the city of Sheboygan, WI, north of Milwaukee, the Kohler Company relocated in 1912, and in 1917 built the planned community of Kohler, WI, to house both the new factory and its workers.

The first signs of labor unrest at Kohler came in 1897, when approximately 25 moulders walked off the job in protest of a 50% wage cut, but the early days of the Kohler Company were in other ways kind to workers and their families. Under the leadership of John Kohler and his son Walter J. Kohler, Sr., workers received competitive wages, affordable housing in the company town, and health benefits. Disputes over how hard workers were pushed in exchange for those wages and benefits, however, were a contributor to the 1934 strike. The Kohlers also became one of the most powerful and influential political dynasties in Wisconsin history: Walter Sr. served as Governor from 1928-1932, and his son Walter Jr. would go on to serve in that office from 1952-1957.

When the Great Depression struck in the 1930s, profits and wages fell. Layoffs hit the community hard, and work hours were cut back sharply, with many workers getting only one or two days of work per week - while they owed their mortgages to the Kohler Building and Loan Association for housing in the company town. Workers soon organized under the auspices of the American Federation of Labor (AFL) in August 1933, to which Kohler responded in September by forming a company union, the Kohler Workers Association (KWA). On July 17, 1934, the AFL-organized union called a strike. Over 1,000 picketers walked the line the first day of the strike, almost all Kohler workers. Things quickly turned violent, however, when Kohler, painting the strikers as outside agitators, called in armed deputies to suppress the strike. Two workers were killed by gunfire, and more than 40 injured. The National Guard was called in the following day. An election in September affirmed the company union, the KWA, as the workers’ choice, but the strike continued until 1941, when an agreement disbanded the AFL affiliate.

Workers became dissatisfied with the company union in the early 1950s, and in 1952 voted to affiliate with the United Automobile Workers (UAW) as Local 833. The company was run at this point by Herbert V. Kohler, Sr., who took over after Walter’s death in 1940. When the union’s initial contract expired in March 1954, their demands for a new agreement included higher wages, seniority protection, pensions, and standardized arbitration and grievance procedures. In the face of opposition from management, on March 14, 1954, a strike vote was held, and Kohler employees voted 1,105-148 in favor of a strike. The strike was officially called on April 5, and would stretch on until August 26, 1960, making it the longest in United States history. More than 2,000 picketers blocked the main entrance to the plant, shutting down the plant for 54 days and maintaining a united front against any workers who attempted to cross the picket line.

Kohler again blamed outside agitators for the strike, although according to the regional director of the AFL, Charles Heymanns, the average seniority on the picket line was 11 years and 7 months. The company complained that mass picketing was prohibited by state law, to which the union responded that Kohler’s acquisition of tear gas and guns was equally illegal. The Wisconsin Employment Relations Board (WERB) was called upon to intervene, while at the same time the UAW turned to the federal courts to seek review before the National Labor Relations Board (NLRB). The WERB eventually ruled against the union, shutting down the picket line, but bargaining did not resume: the Kohler Company said it had given its final offer before the strike began. A nationwide boycott was ineffective in forcing Kohler back to the bargaining table.

The US Senate Select Committee on Improper Activities in the Labor or Management Field (better known as the McClellan Committee) held hearings on the dispute in 1958 that failed to reach a unified conclusion, but in 1960, the NLRB at last ruled in favor of the UAW, finding that the Kohler Company had refused to bargain in good faith. Collective bargaining sessions resumed at last in 1962, and in 1965 the parties agreed in an out-of-court settlement: the company would pay $4.5 million in back wages and pension contributions, and the union would drop its remaining unfair labor practice charges.

For 50 years, relative peace reigned in Kohler, with the exception of a brief 16-day strike in 1983. In 2010, a new contract raised health insurance premiums and introduced a two-tier wage system, with Tier B workers making at least $10 less an hour than Tier A workers. On November 16, 2015, rejecting the company’s final counteroffer, members of Local 833 voted once more to strike. Picketers blocked the doors to the factory and obstructed traffic, leading to an eventual injunction by the courts to keep the roads open. More than 2,000 workers took part in the strike, most representing the higher wage tier. After 32 days, an agreement was reached that narrowed the two-tier wage gap and improved pay and insurance coverage for all workers.

Photo by the UAW Public Relations Department. From the UAW archives in the Walter Reuther Library at Wayne State University. http://reuther.wayne.edu/node/4932

From the archives of the Wisconsin Historical Society. Image 58466. https://www.wisconsinhistory.org/Records/Image/IM58466

From the archives of the Wisconsin Historical Society. Image 143453. https://www.wisconsinhistory.org/Records/Image/IM143453