Dedicated in an era with the monumental landscape of the Civil War was dominated by organizations like the Sons of Confederate Veterans and the United Daughters of the Confederacy, this monument relates the history of the Battle of Franklin from the perspective of white Southerners. The marker refers to the Civil War as "War Between The States," a phrase utilized by organizations and people that sought to vindicate the Confederacy and antebellum South. The Battle of Franklin is known for its bloody and devastating outcome that effectively reduced Confederate forces in this part of Tennessee. As a result, many supporters of the Lost Cause ideology have focussed on this battle as a lost opportunity similar to the way that Pickett's Charge is viewed as the "high watermark of the Confederacy" despite clear evidence that the Confederacy was crumbling internally as states failed to provide their recruitment quotas or material support. The battle occurred on November 30, 1864, as Confederates under command of General John Bell Hood clashed with a well-defended Union army commanded by General John M. Scofield on the outskirts of Franklin, Tennessee. Both sides endured high casualties, but the battle resulted in a clear Union victory. The battlefield at Franklin has been preserved as a historic park.

This marker refers to the Civil War as "War Between The States," a phrase utilized by organizations and people that sought to vindicate the Confederacy and antebellum South 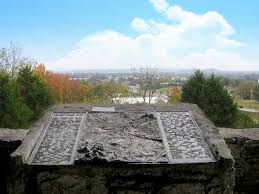 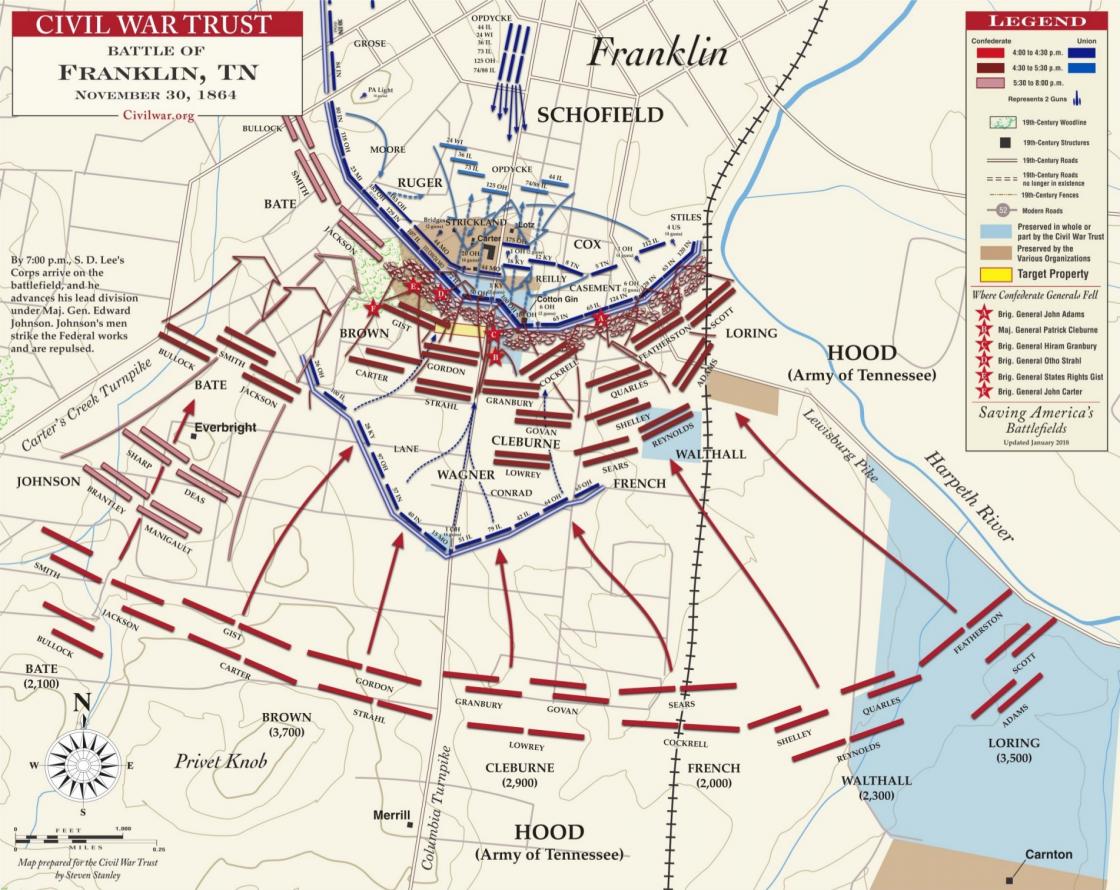 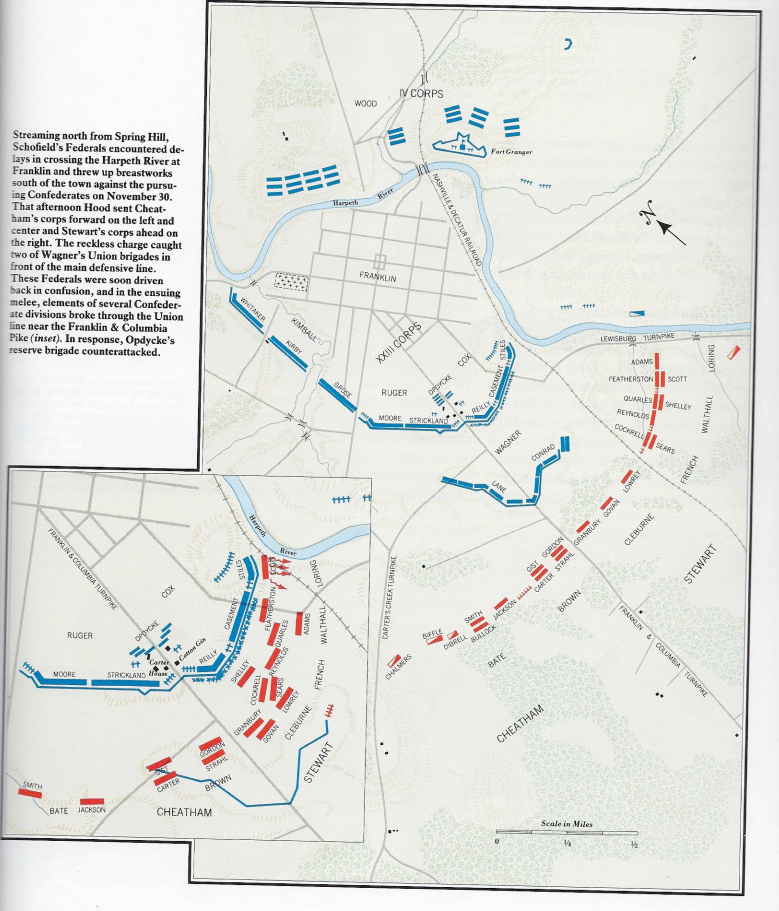 Painting of the Battle of Franklin 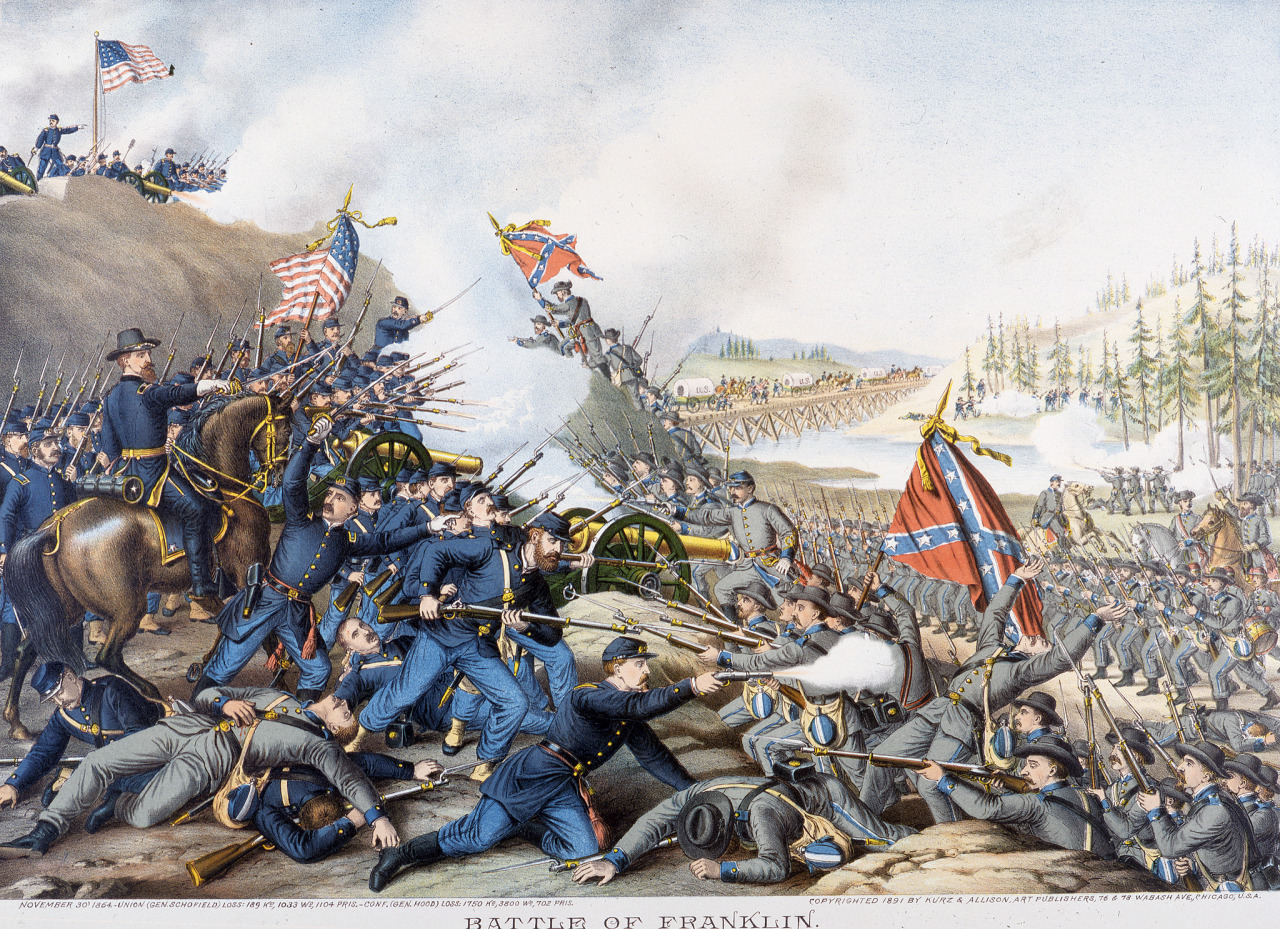 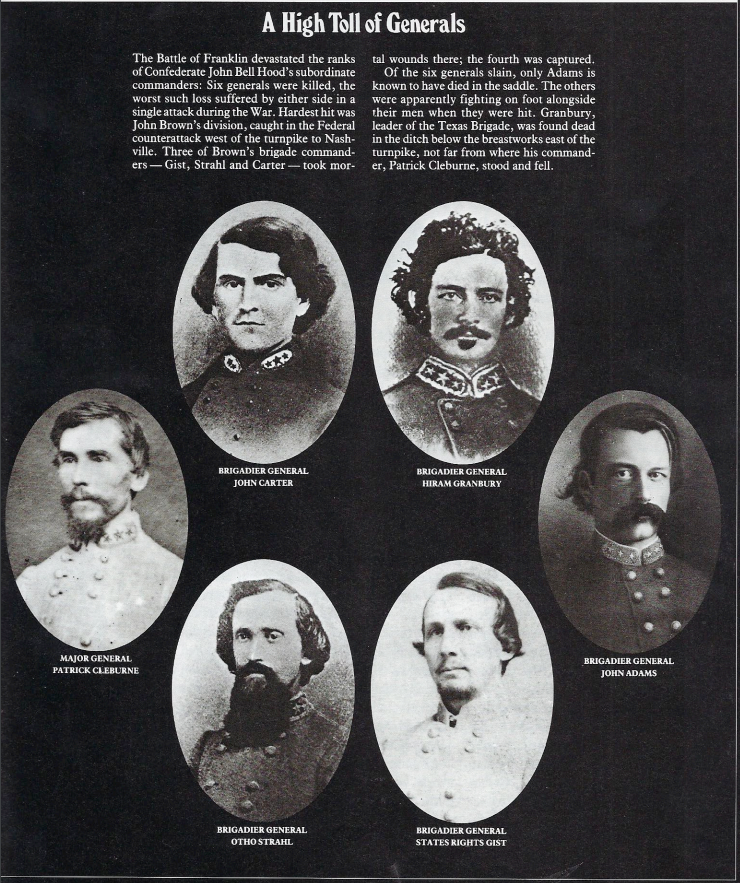 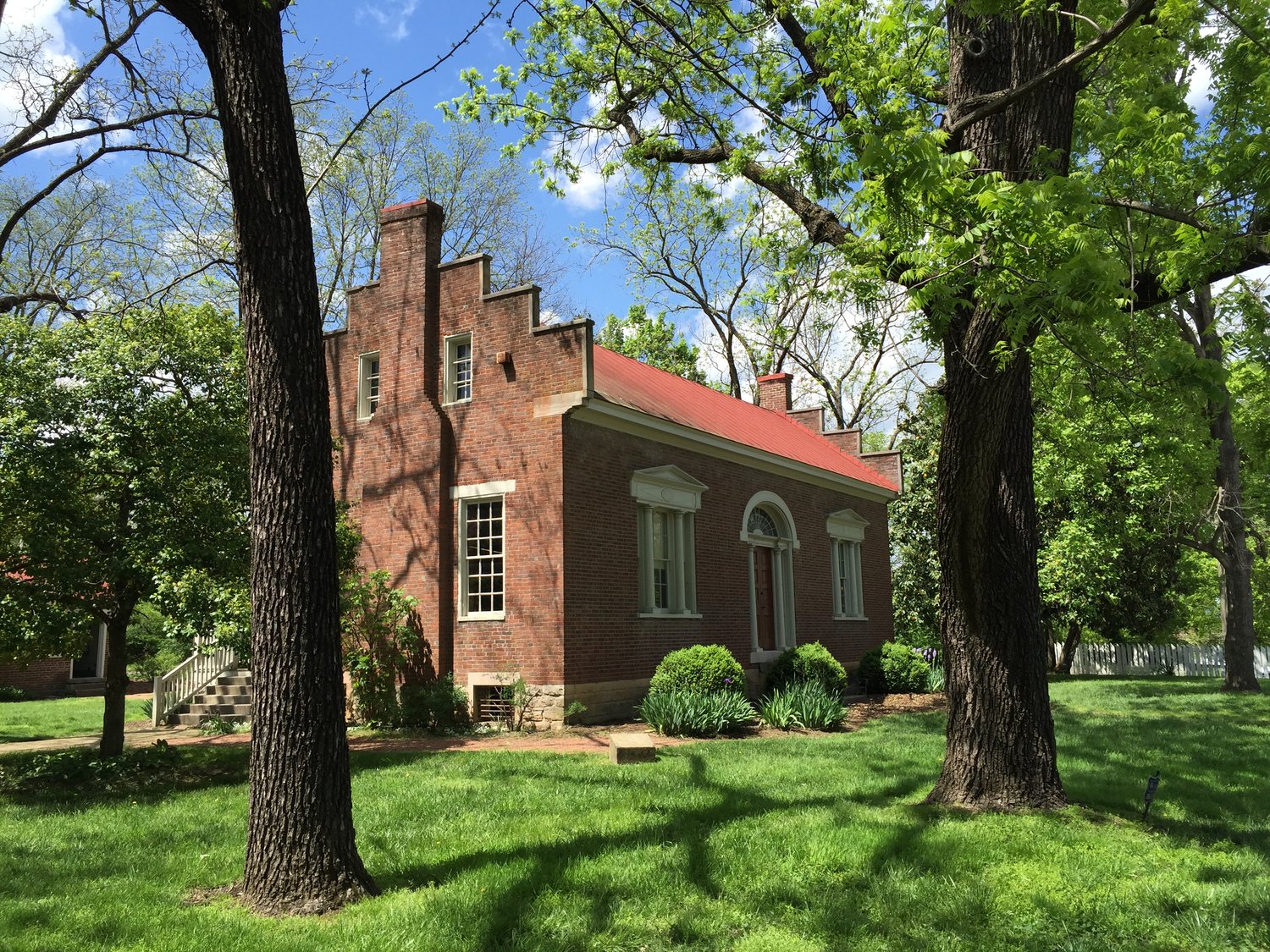 It was not until Major General William Sherman and his Union forces were well past Atlanta that the Confederate army decided to launch a counter invasion into Tennessee. In late November, General John Bell Hood commander of the Confederate Army of Tennessee lead a campaign of to reclaim Nashville. However, Hood’s movements would not go unnoticed. General Sherman would order General John M. Schofield to march his Federal (Union) Army from Georgia and converge with General Thomas’s forces outside of Nashville to intercept Hood’s march into the city. Unfortunately for Schofield, he and his forces would be caught vulnerable and unprepared by Hood’s fast-moving advance at Pulaski. Schofield immediately order his troops to head northward toward Columbia, where he would order another retreat. In their life and death race, the Federals would engage in small skirmishes at Spring Hill and later miraculously escape Hood’s onslaught under the cover of darkness. By early morning November 30, the Scofield and his Federal army was fully intact 8 miles north in Franklin. Despite losing their monumental advantage, the Confederates quickly broke camp to pursue Schofield.

At Franklin, Schofield did not like what saw. The town was tucked in a tight bend of the Harpeth River and offered little escape as both bridges were damaged and unusable. With no solution in sight Scofield decided to stand and fight, ordering Brigadier General Jacob Cox to command fortifications and defend Franklin. Using the Carter house as a central point, Cox positioned his line like the arch of an anchor below the Harpeth enclosing the tight bend. One major weakness in the Federal line was at the point where the Columbia Turnpike ran straight through the trenches. Placed here on purpose, this gap allowed for the last pieces of artillery, wagons, and rear guard to pass through. To fortify the gap, Cox set gun emplacements and a second trench line facing the opening. With all that could be done and the Federals confident in their defenses, they calmly awaited the Confederate attack. However, the Federal’s calm behavior was severely changed by the actions of Brigadier General George Wagner. Wagner who commanded the rear guard abandoned Winstead Hill in response to a Confederate flanking maneuver. Ordered to halt and retreat upon the sighting of the Confederates, Wagner decided to hold his position no matter what. Soon on the evening of November 30, 1864, Hood’s army was in sight and marching in battle formation, lining up for their assault.

As the confederates grew closer, fear began to build among Wagner’s men. Numerous attempts were made to convince him to retreat, but Wagner remained, fatally exposing himself and his men to the Confederate advance. The Confederates were now close enough to initiate their assault. Advancing in a synchronized wave of men, they paused, reorganized their lines, and charged. Wagner’s line broke almost immediately and troops began retreating to the mainline. The gunners and rifleman position on the mainline could do little to help as they would run the risk of shooting their own men. Confederate officers instantly noticed this and ordered their men to charge the Federal breastworks right behind Wagner’s retreating troops. Once most of Wagner’s men were inside the Federal lines, the infantry and artillery opened up, but was too late to stop the Confederate hailstorm. The charge would then ensue a massive panic among the Federals in the breastworks defending the gap. The panic spread like a contagion and many men would turn and run, abandoning the guns and works. The Confederate pushed into the gap and gained possession of both guns and works, thus successfully breaking the Federal line.

Tired and winded from their long and successful charge, three confederate divisions led by General Cleburne, Brown and French managed to tear a gaping hole in the Federal line. There position was superb, as a continuous headlong push could widen the gap and possibly destroy Scofield’s Federal army. However, there was one man who would prevent this from happening, Union Colonel Emerson Opdycke. Opdycke fled Wagner’s stupidity and repositioned himself and his brigade passed the Carter house to act a reserve force. Once fighting commence Opdycke ordered his men to rush straight into the Federal gap. Joining the charge would be two Kentucky regiments and remnants of Wagner’s brigades. With weapons held high, the Federals crashed into the oncoming Confederates, marking the beginning of one of the most savage hand to hand conflicts of the war. Soldiers from both sides were beaten, clubbed with rifle stocks, stabbed with bayonets, and shot at point blank. Finally, the weight of Opdycke’s counter offensive proved to heavy for the Confederates. Forced to fall back, the Confederates found refuge inside and around the Federal trench lines. Federal troops would then successfully reoccupy most of the mainline and plug gap. Due to Hood’s careless use of attacking divisions there were no reserves units to reinforce the initial assault, leaving many of his men stranded with death.

However, the Battle of Franklin raged on with fury as Confederates launched assaults all up and down the Federal front and flanks. The assaults on the Federal left and right would prove difficult for the Confederate attackers. Many were shot dead in tangling terrain or stopped by deadly artillery strikes. Only a few brigades successfully advanced to the Federal works but were immediately pinned down by crossfire or fell back. As dusk neared, Confederate troops along the front line hugged the outer edges of the Federal earth works. In many places, both armies were separated by only a few feet, which followed with more savage combat. Soon the battle became an endurance race. The pinned down attackers unable to move forward, could do no more than hug the earth, and any attempt to fall back would result in being shot. Some Confederate officers deemed that their position hopeless and surrendered, others would continue to fight and be put down. Federal rifle and artillery fire proved to be extremely beneficial as its continuous pounding inflicted dreadful losses on the attackers. As darkness approached, it became apparent to General Cox the fight was won.

Though the sense of victory filled the air, Scofield’s orders to retreat across Harpeth still held. General Cox believed a counterattack at dawn would destroy the Confederates and urged Schofield to reconsider, but Scofield held on his decision to retreat. With the bridges now repaired the withdraw proceeded as ordered. The federal troops began pulling back around 11pm and by 3am on December 1 the last of the rear guard crossed the Harpeth, burning the bridges behind them. Unfortunately, Schofield abandoned many of his wounded, leaving them to await the Confederates. It is estimated that Federal casualties were 1,200 killed and wounded, 1,100 missing or taken prisoner. Hood’s army was suffering, best estimates are that he lost 7,000 men 1,800 killed and the rest wounded or captured. In addition, the battle took a damaging toll on the Confederate ranks. Six generals were killed, the greatest loss suffered in a single attack during the War. However, learning of Scofield’s nighttime retreat and unaware of how badly crippled his men were, Hood ordered an immediate pursuit for Nashville.