A small fortified frontier settlement in the early 19th century, Fort Mims became the site of a bloody engagement and massacre in August 1813. A party of Red Stick Creek Indians, angry over white encroachment onto Native lands, attacked a party of several hundred American settlers, Creeks friendly to the U.S., and enslaved Blacks at Fort Mims. Poorly led and unprepared, the outer fort was quickly overwhelmed. Falling back into interior fortifications, the settlers managed to stave off the Red Sticks for more than an hour but were ultimately overrun. The fort was burned, and the Red Sticks massacred several hundred settlers. The Fort Mims Massacre galvanized local settlers and forced the U.S. government to intervene. In the ensuing Creek War, the Red Stick Creeks were decisively defeated and forced to cede over 20 million acres to the United States. Today, the Fort Mims State Historic Site preserves and interprets the story of Fort Mims and the Creek War. 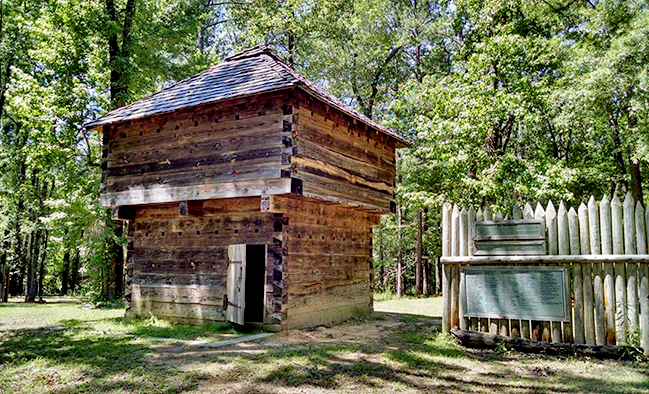 A diagram of Fort Mims, based on the papers of a U.S. general who fought in the Creek War 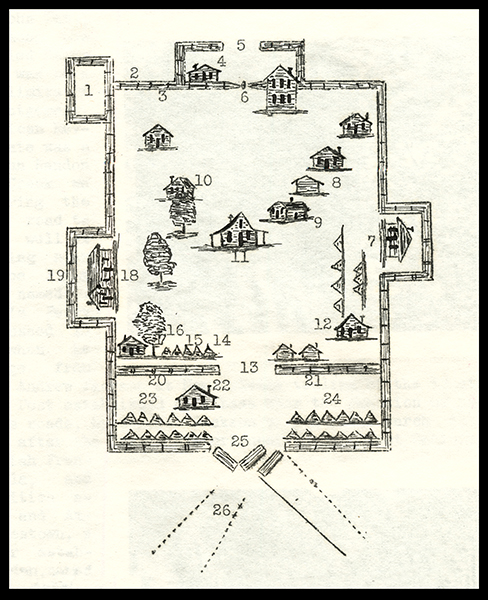 This dramatic 1858 engraving of the Fort Mims Massacre contains a number of inaccuracies; the shoddy Mississippi militia would hardly have been in such fine uniforms 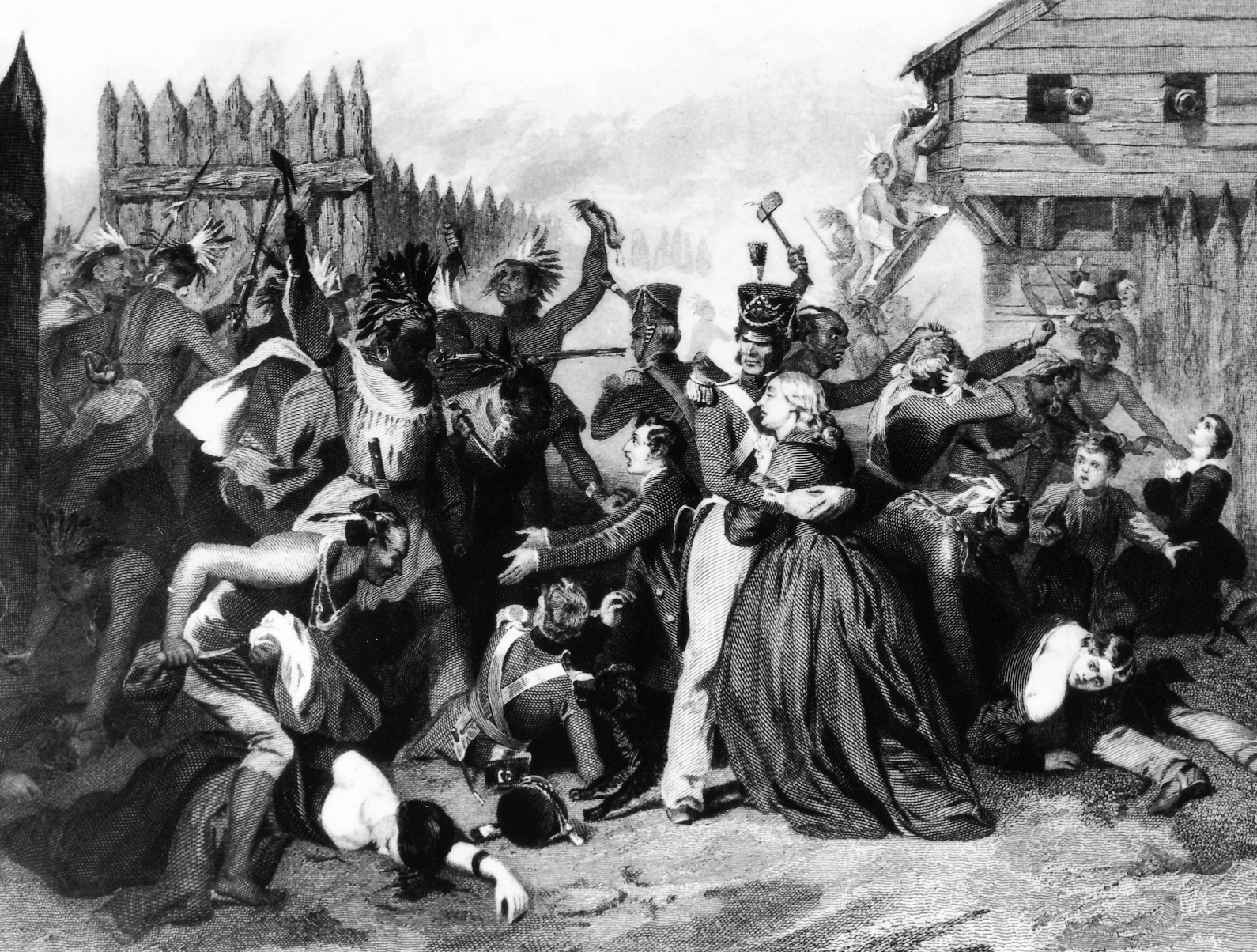 In the early 19th century, American setters steadily moved into Mississippi Territory (a region which encompasses present day Alabama and Mississippi). In doing so, they encroached on the lands of the Creeks (or Muscogees). Different factions of Creeks reacted to white settlement in different ways. Lower Creek towns (positioned along the Chattahoochee River) forged positive relations with American settlers, trading with them and embracing certain aspects of white American culture (such as agriculture). Conversely, Upper Creek towns (along the Tallapoosa and Coosa Rivers) remained more aloof, questioning the wisdom of acculturation.

By the 1810s, these differing views on white settlers and acculturation boiled over. In 1811, Shawnee war leader Tecumseh journeyed south and visited Creek Nation. Driven by his brother Tenskwatawa’s (the “Prophet”) visions, Tecumseh hoped to create a continental pan-Indian alliance that could limit the influence of white Americans. Although he and his party ostensibly preached a policy of peace for whites, they simultaneously urged the Creeks to divest themselves of white culture and hold firm against white settlement on Native lands.

Although Tecumseh’s visit did not firmly pull the Creek tribe into Tecumseh’s Confederacy, it did have a profound influence on many, especially those in the Upper Creek towns. Creek religious shamans and “prophets” soon embraced a millenarian vision of the future, wherein Creeks could end American colonialism by embracing Creek religious beliefs and violently expelling American settlers from Creek soil. As this anticolonial religious fervor swept Creek Nation, many embraced it and others rejected it. In short, the Creeks themselves were divided over how to react to Tecumseh’s message and the realities of white settlement.

Throughout 1812 and 1813, this political and religious upheaval descended into a Creek civil war. The so-called “Red Stick” Creeks (named for their red-painted war clubs), many of whom came from Upper Creek towns, violently sought to impose their anticolonial views on the rest of Creek Nation. As the Creeks descended into civil strife, the United States entered into conflict with Great Britain in the War of 1812.

The Creek civil war, and the hostile intentions of the Red Sticks, did not go unnoticed among local Americans, especially after a small party of Red Sticks killed two settler families near the Ohio River to the north. In July 1813, a party of Red Sticks under Peter McQueen journeyed south to Spanish-held Pensacola. After some wrangling, they managed to secure a supply of much-needed gunpowder, ammunition, and blankets. Local American authorities viewed the acquisition of these supplies with alarm. On July 27, a party of American militia under Colonel James Caller attacked McQueen’s Red Sticks along Burnt Corn Creek. Although the Americans initially routed the Indians, they became preoccupied with their captured loot and allowed the Red Sticks to successfully counterattack and drive them from the field.

Having been attacked by Americans at Burnt Corn Creek yet nevertheless proving victorious, the affair emboldened the Red Sticks to strike out against the American settlers. They targeted Fort Mims, a stockade fort established by Samuel Mims some 35 miles north of Mobile. About an acre in size, the fort included a stockade wall, blockhouse, and number of wooden structures. Fort Mims held not only 400 American settlers and enslaved African-Americans, but also a number of enemy Creeks friendly to the United States. Around 70 Mississippi militia under the command of Major Daniel Beasley garrisoned the post. Major Beasley had little military experience or acumen. He did little to improve the post’s fornications, and indeed, he routinely left the stockade gates open and failed to post sentries. In late August, slaves reported to Beasley that Red Sticks were watching the fort. An American patrol found nothing, and Beasley dismissed the reports as false alarms. They were not.

On August 30, 1813, approximately 700-800 Red Stick Creeks advanced on Fort Mims. They were commanded by William Weatherford (known as Red Eagle); among the ranks was Peter McQueen and his warriors from the Burnt Corn fight. The paltry preparedness of Fort Mims’ garrison made the attack simple. At noon, the militia garrison’s drummer beat out a tune signaling lunchtime. The Red Sticks used the noon alarm as their cue and swiftly rushed towards Fort Mims’ open gate. Major Beasley, realizing the danger, attempted to shut the gate, but it had been open for so long that dirt had accumulated along its base, preventing its closing. Red Sticks poured into Fort Mims, slaying Beasley at the gate.

The American settlers panicked as the enemy overwhelmed them. Although the Red Sticks quickly gained control of the fort’s outer wall, a smaller inner palisade offered some protection. The Americans rushed inside the inner palisade, and Captain Dixon Bailey (an allied Creek) and a small party of Creek and Mississippi militiamen held of Weatherford’s Red Sticks for about an hour. Refusing to leave, Weatherford set the fort’s buildings on fire, threatening to burn out the garrison. Although twenty people inside the fort managed to hack their way through the wooden walls to safety, the rest were left to their fate. The Red Sticks slaughtered the American settlers and the Creek and Mississippi militiamen; at least 247 were killed, possibly more. They spared the Black slaves; indeed, there’s some evidence the slaves may have assisted the Red Sticks during the engagement. Having burned the for and butchered the garrison, the victorious Red Sticks departed.

The Fort Mims Massacre constituted a major turning point in the Creek conflict. As the rallying cry “Remember Fort Mims” swept the countryside, the United States could no longer afford to ignore the conflict in Creek country. The U.S. subsequently raised thousands of regional militiamen and also sent a force of United States regulars to quash the Red Stick rebellion. The conflict dragged on through winter and spring, until the Red Sticks were decisively defeated in March 1814 by General Andrew Jackson at Horseshoe Bend. As a result of their defeat, the Creek Nation was forced to cede over 20 million acres of land to the United States at the Treaty of Fort Jackson.

Today, the Fort Mims State Historic Site preserves and interprets the site of the 1813 massacre. The site contains a restored blockhouse and a reconstruction stockade wall.