The battle of Blair's Landing, also known as Pleasant Hill Landing, was fought April 12-13 1864 at Red River Parish, Louisiana. The battle was a Union victory. 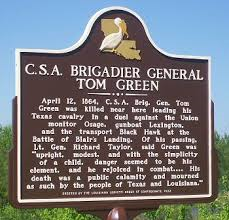 After the battle of Pleasant Hill on April 9, Brigadier General Tom Green led his men to Pleasant Hill Landing on the Red River, where, about 4:00 pm on April 12, they discovered grounded and damaged Union transports and gunboats, the XVI and XVII army corps river transportation, and U.S. Navy gunboats, with supplies and armament aboard.

Union Brigadier General Thomas Kilby Smith's Provisional Division, XVII Corps, troops, and the Navy gunboats furnished protection for the army transports. Green and his men charged the boats. When Green attacked, Smith's men used great ingenuity in defending the boats and dispersing the enemy. Hiding behind bales of cotton, sacks of oats, and other ersatz obstructions, the men on the vessels, along with the Navy gunboats, repelled the attack, killed Green, and savaged the Confederate ranks.

The Confederates withdrew and most of the Union transports continued downriver. On the 13th, at Campti, other boats ran aground and came under enemy fire from Brigadier General St. John R. Liddell's Sub-District of North Louisiana troops, which harassed the convoy throughout the 12th and 13th.