Established by the University of Georgia in 1978 and open to the public, this museum is the leading repository of artifacts and specimens of the state's natural history. Visitors to the museum can tour exhibits from archaeology and botany, to geology and zoology. The museum's collection includes over five million specimens, allowing the museum to rotate many of their exhibits to create a new experience for visitors each time they come to the Georgia campus.

In 1978, the University formerly recognized the Museum of Natural History, and in 1999, the Georgia General Assembly recognized it as the official state museum of natural history. 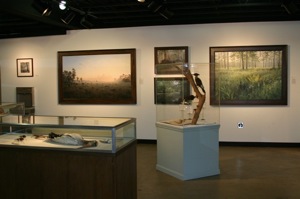 The museum also administers the Singer Moye Indian Mounds site in Stewart County. This 43-acre complex includes eight mounds that were built during the Mississippian period, roughly A.d. 800 to A.D. 1600. Archaeologists at the university believe that the largest mound was built and served as the home of leading regional chieftain. Excavations of these mounds have revealed numerous artifacts, from pipes to shells and other items that demonstrate the existence of a large trading network. Excavations have also revealed items of cultural and religious significance such as human and animal figurines.

Highlights of the museum include numerous skeletons of whales and other large mammals. The museum's Discovery Room includes displays drawn from the museum's collection of over a million specimen from insects to the skeletons of whales and land mammals. This collection includes over 40,000 mammals, 30,000 fish, and several thousand birds. The museum offers a number of educational programs for schools in addition to their exhibits.