The Stephenson house or Oakland, was built by James McNeil Stephenson in 1832. The property has been a part of Parkersburg since close to the establishment of the city in 1810. Since then the property has been passed down form family member to family member keeping an oral history and somewhat written history through old documents. It was recently given to the West Virginia University at Parkersburg Foundation to preserve the house for historical purposes.

Old picture of the Stephenson Mansion 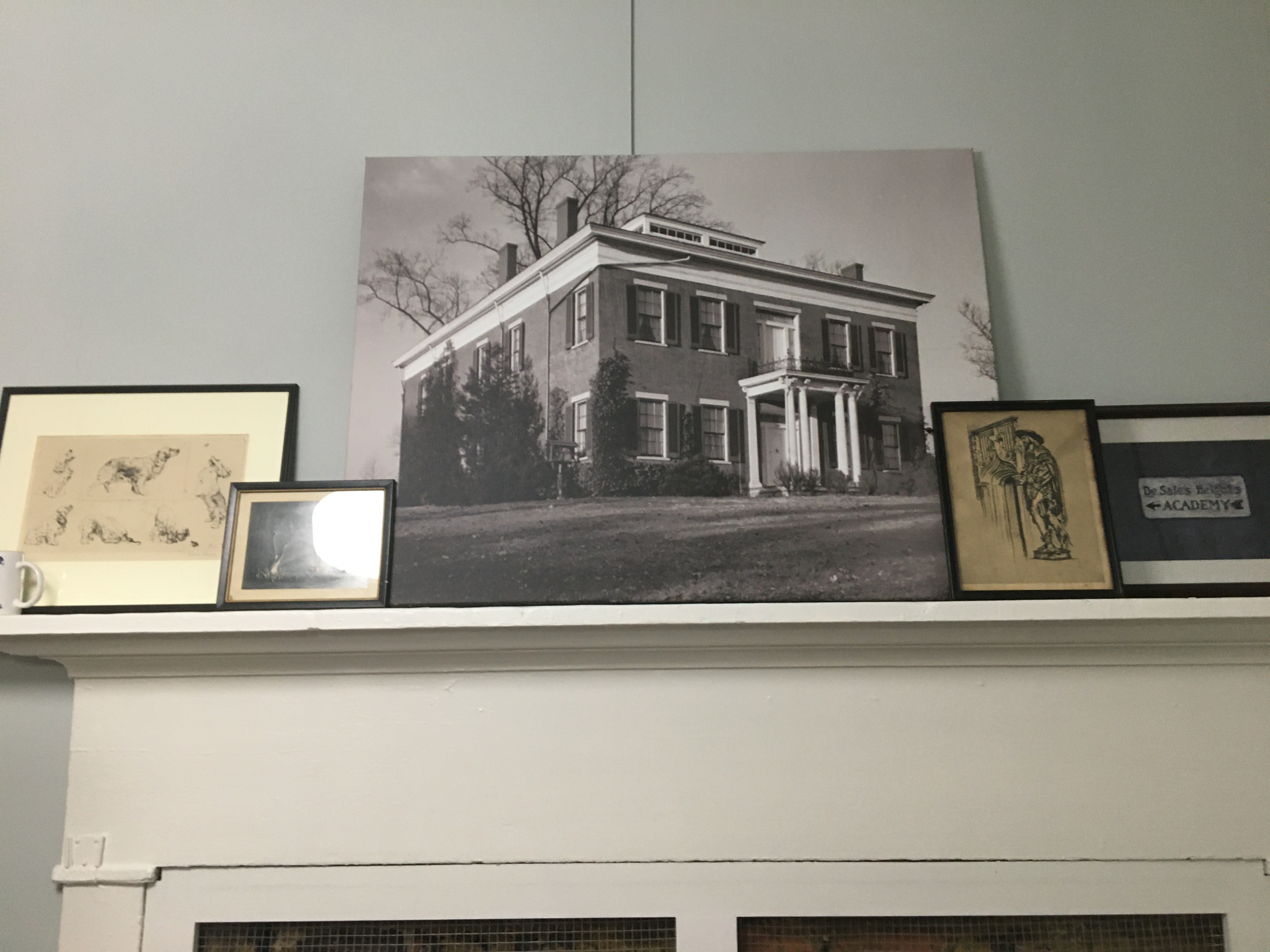 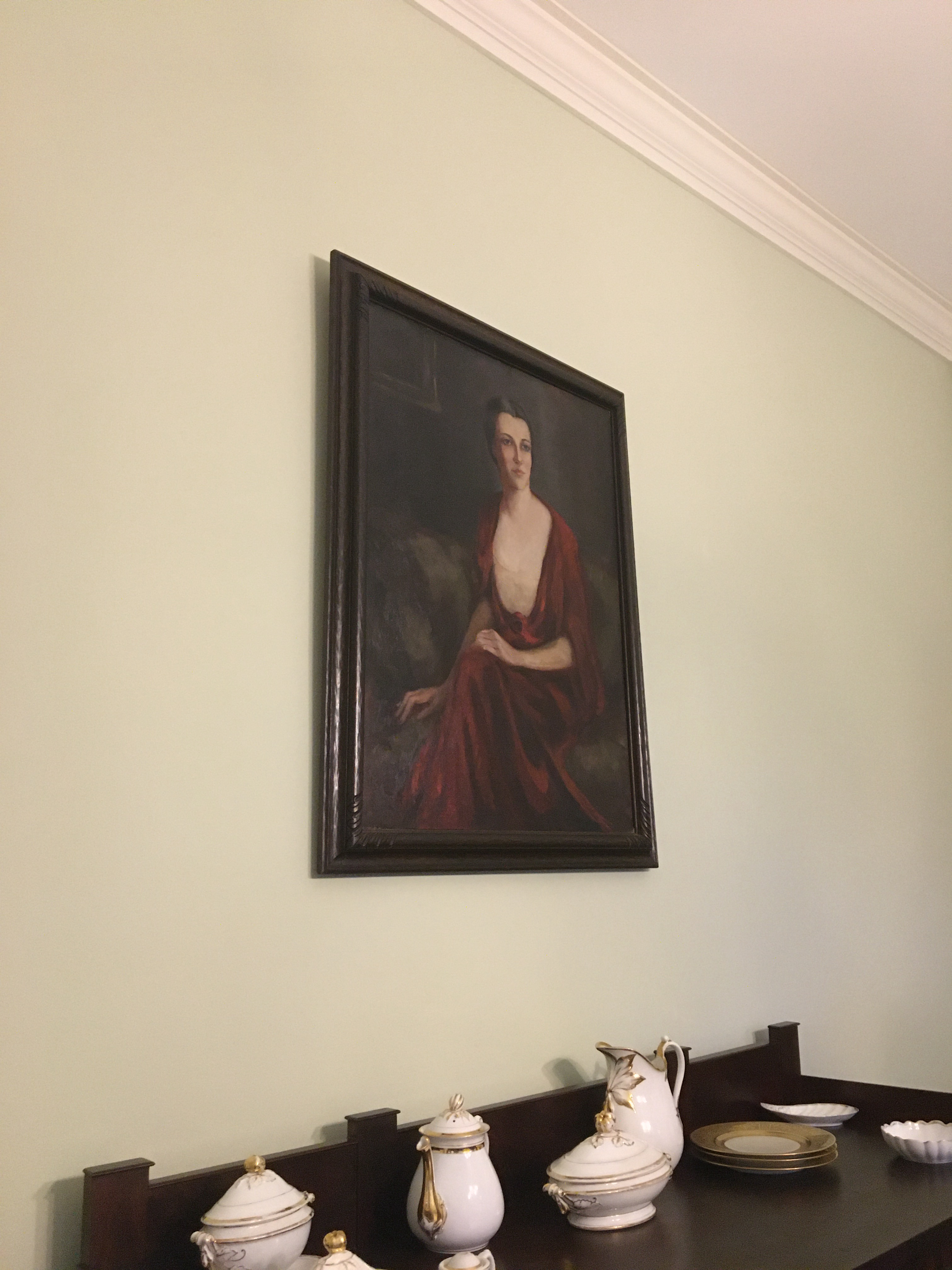 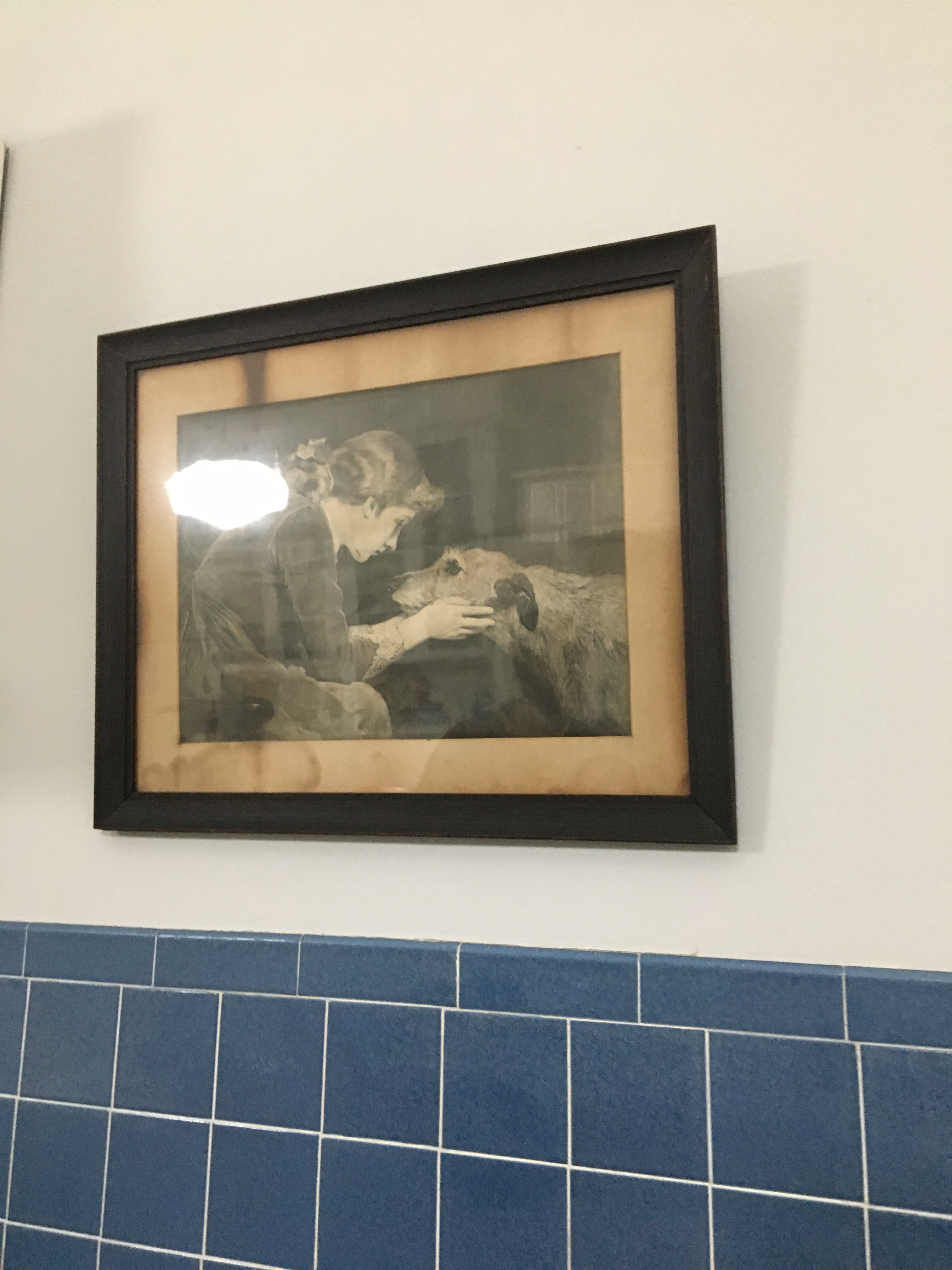 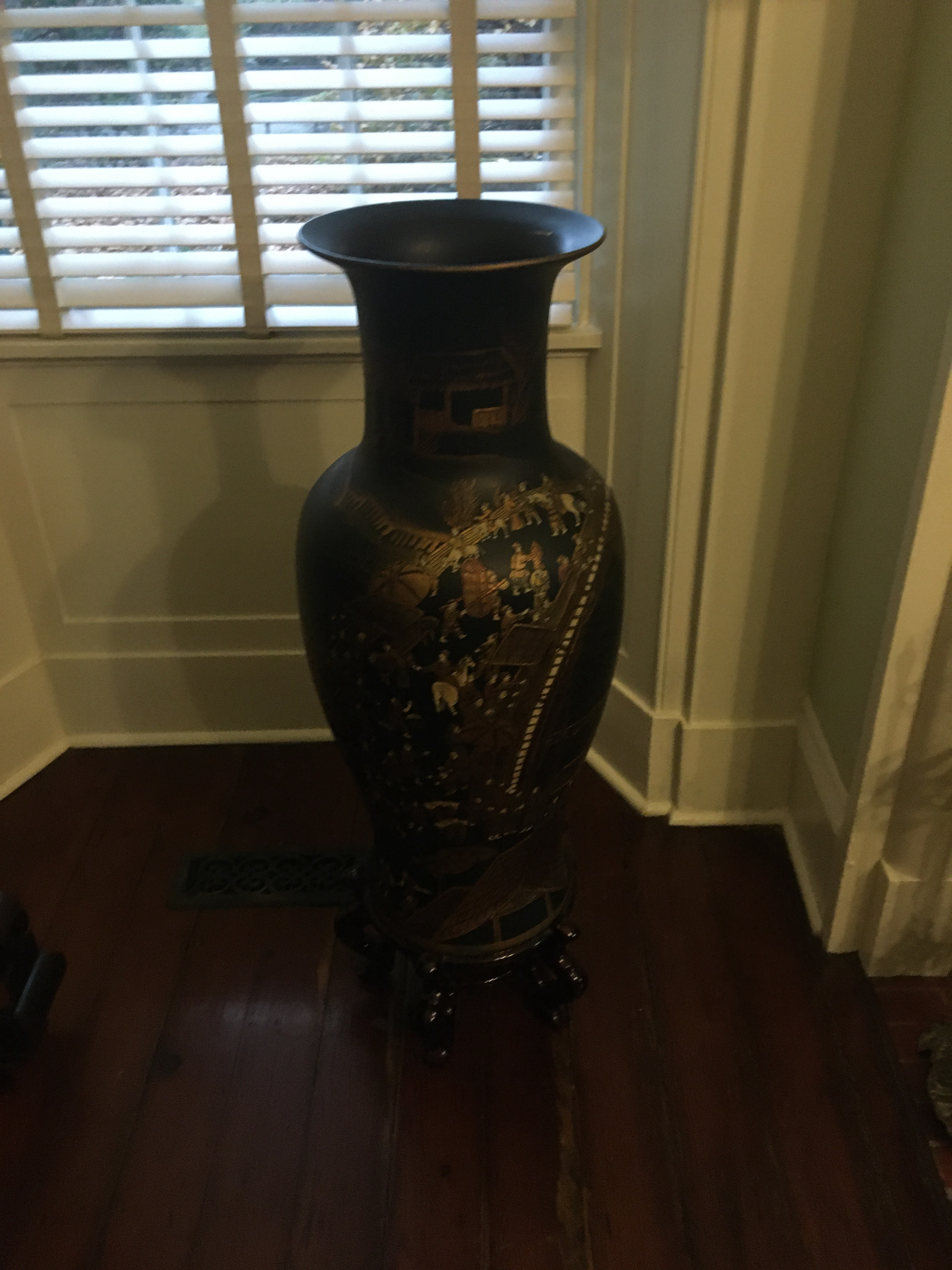 One of the chairs James McNeil sat in 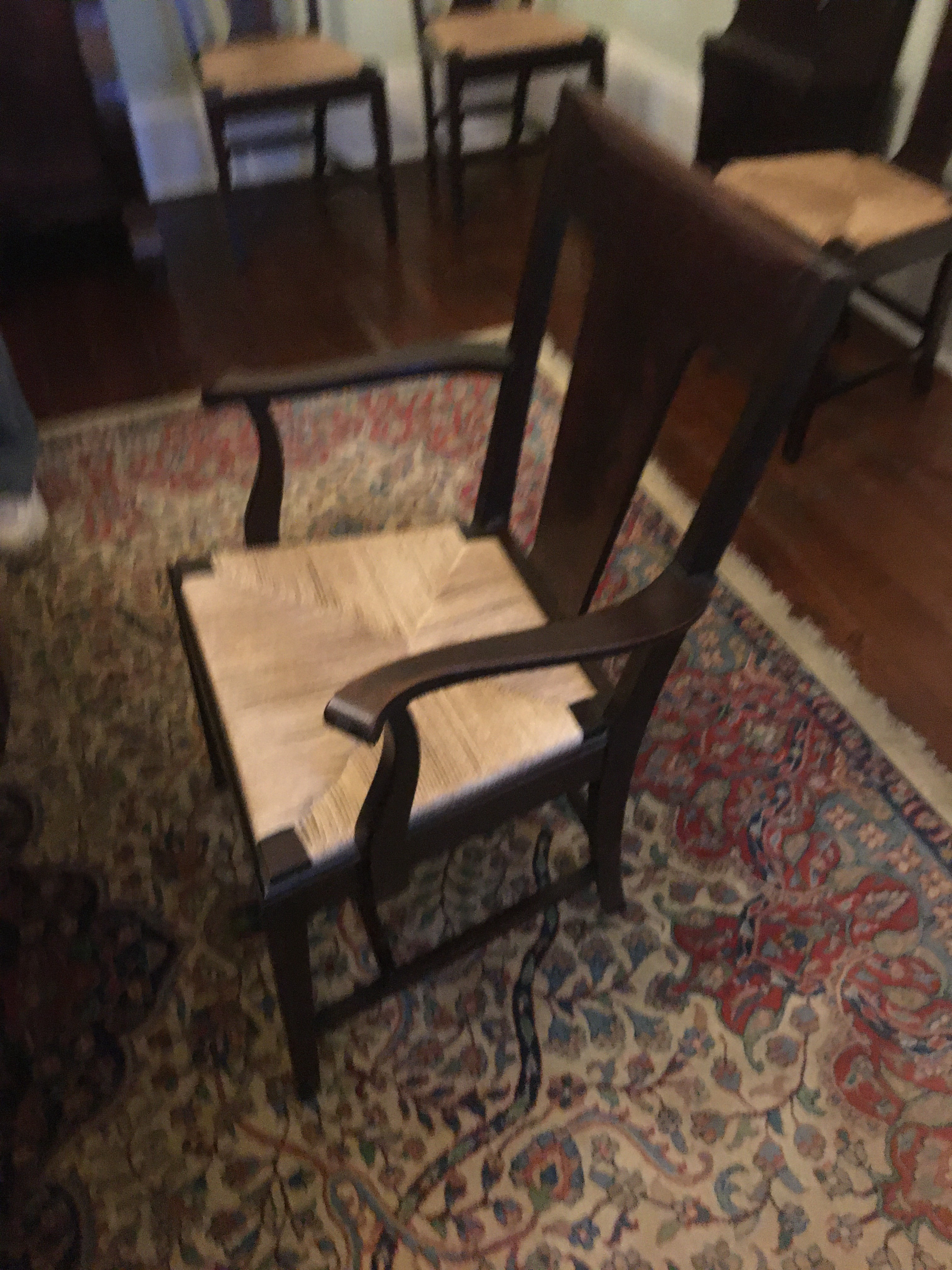 Drawer cabinet with a pullout desk 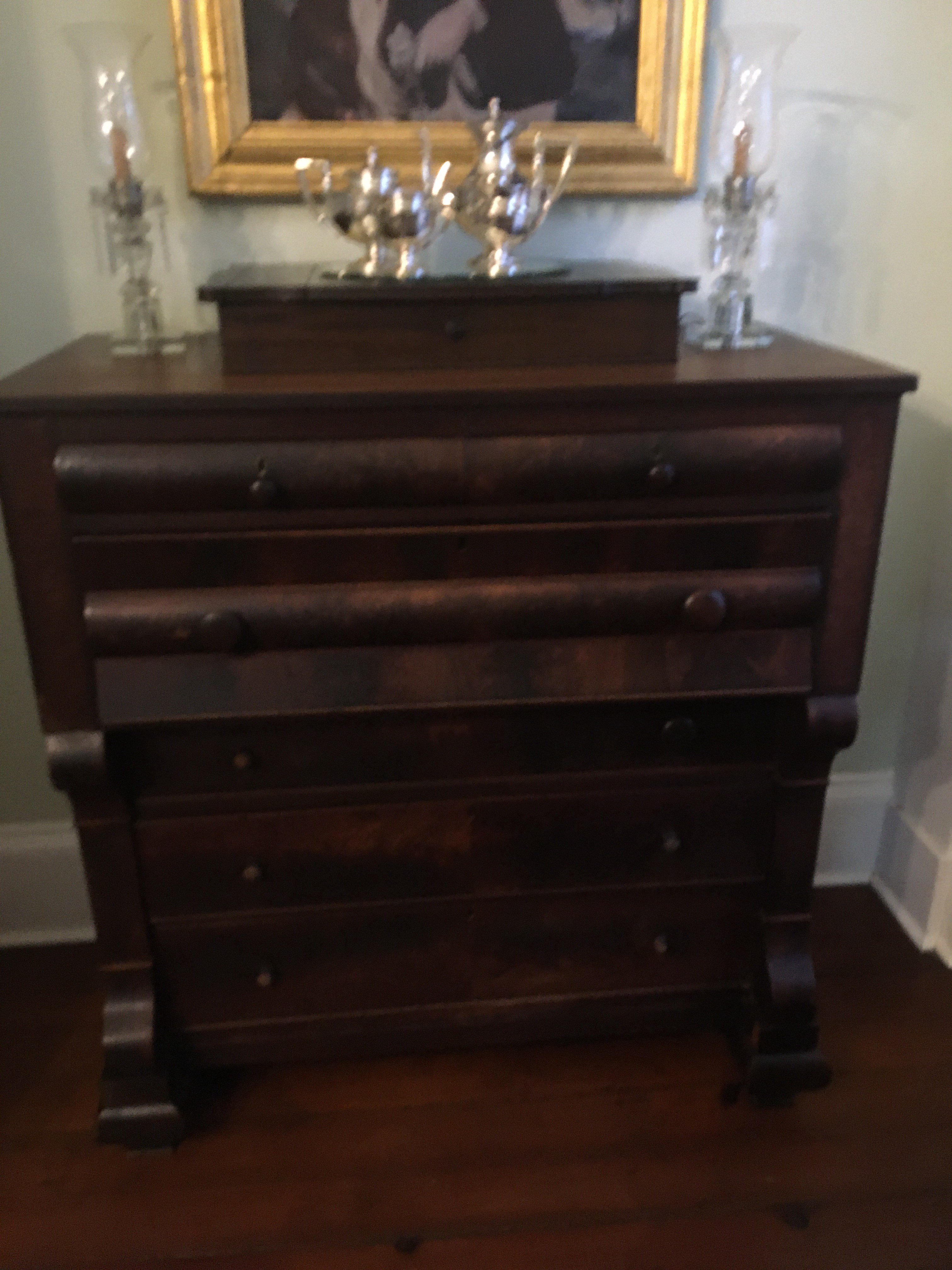 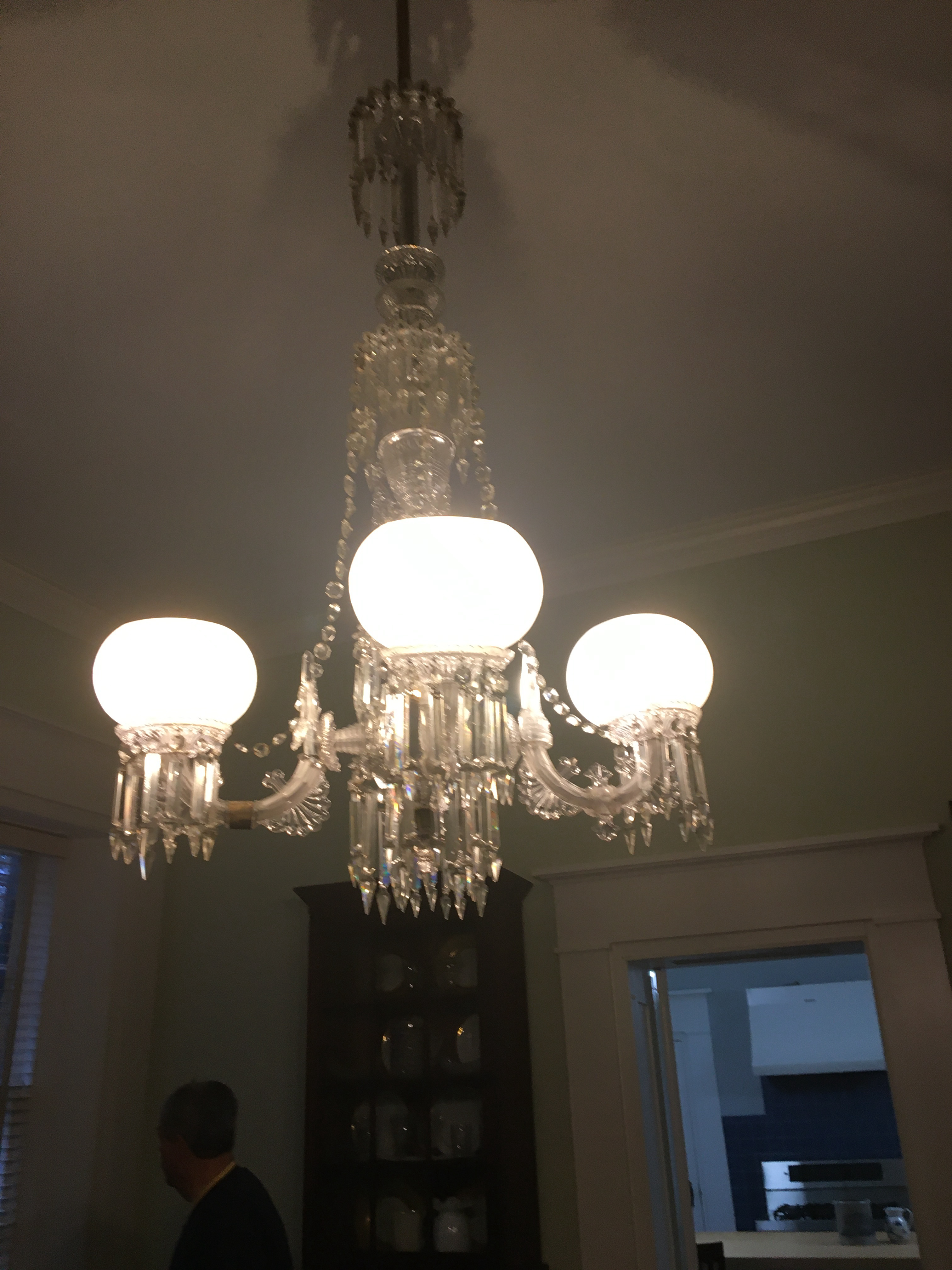 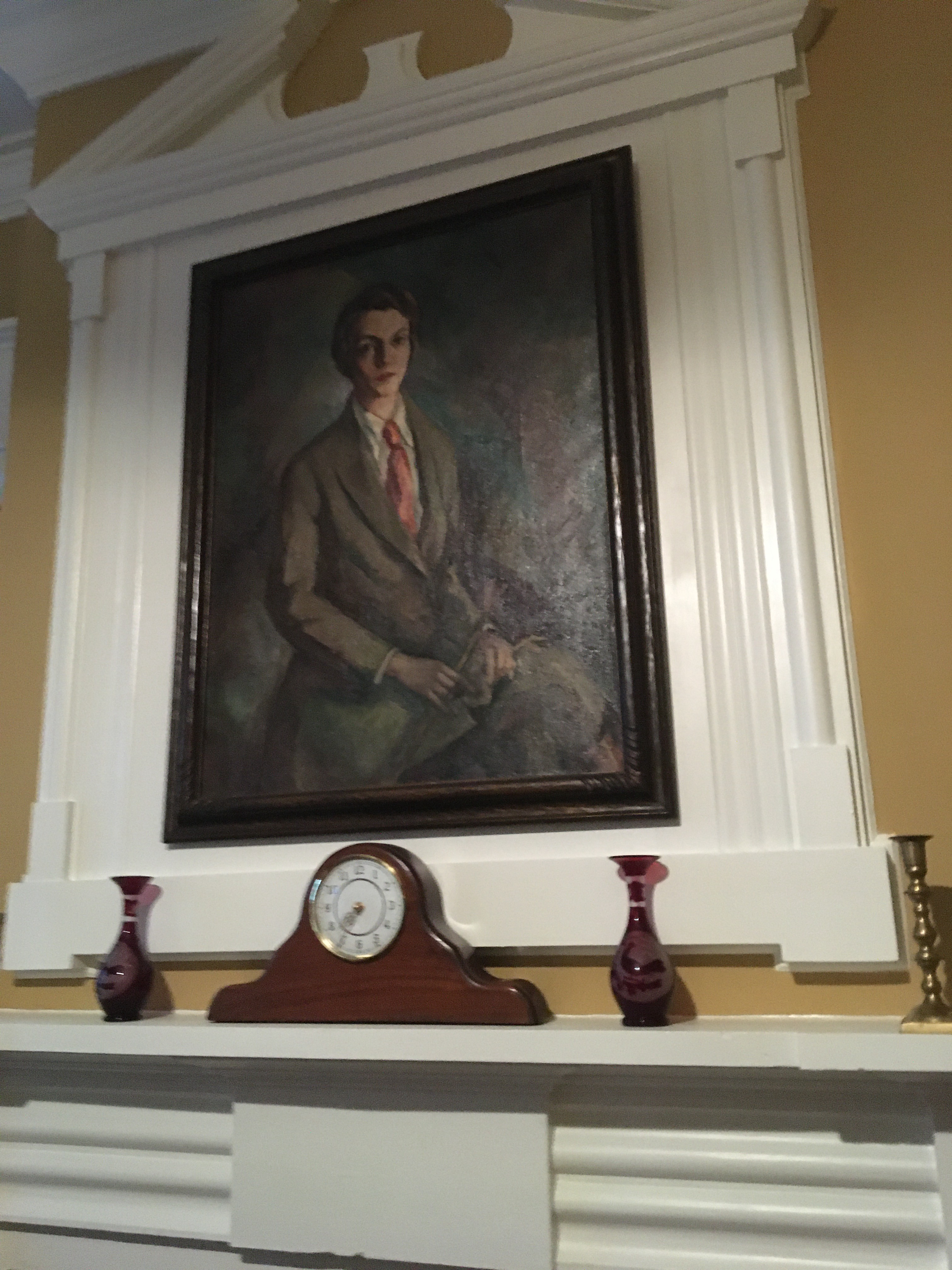 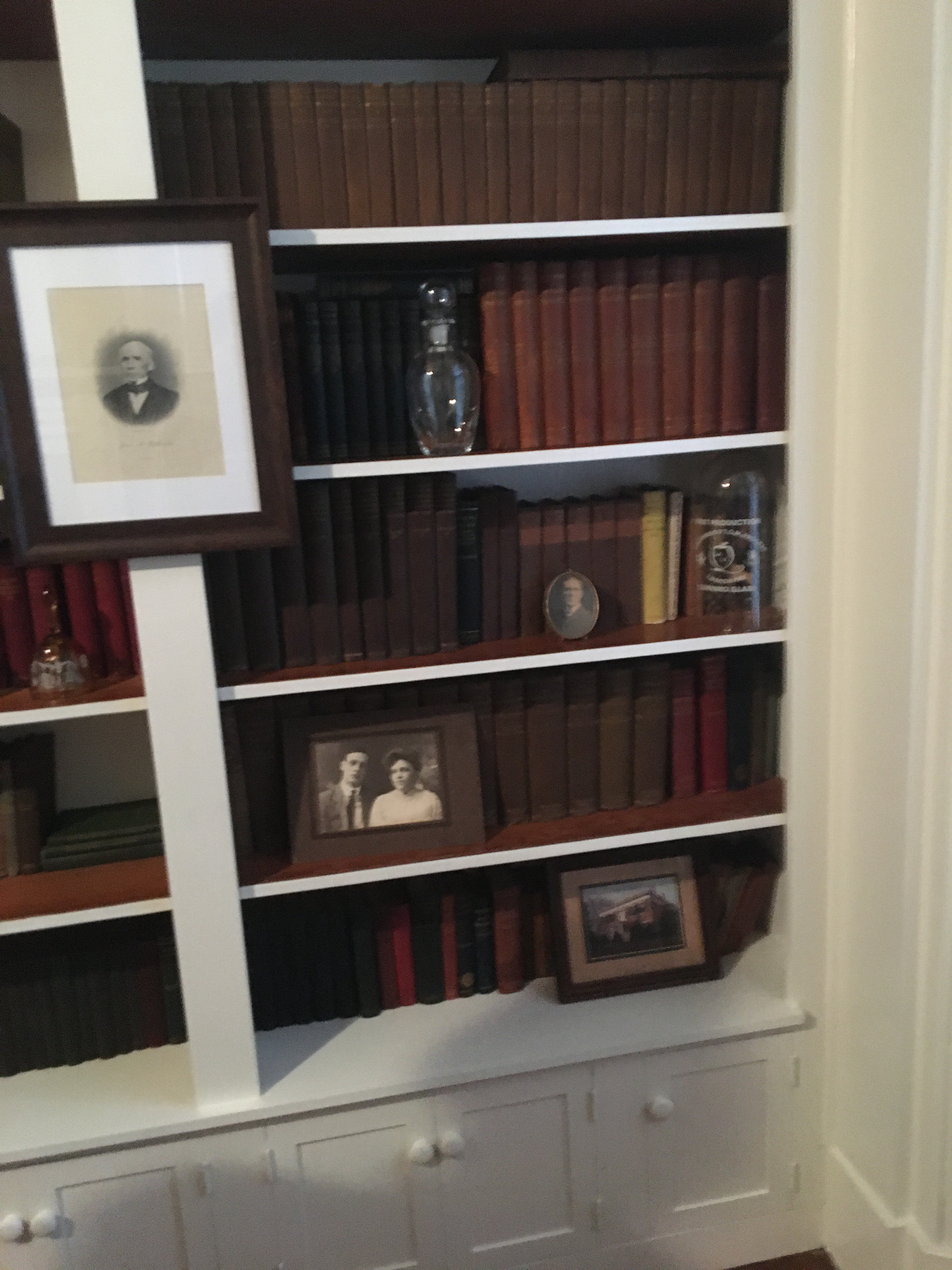 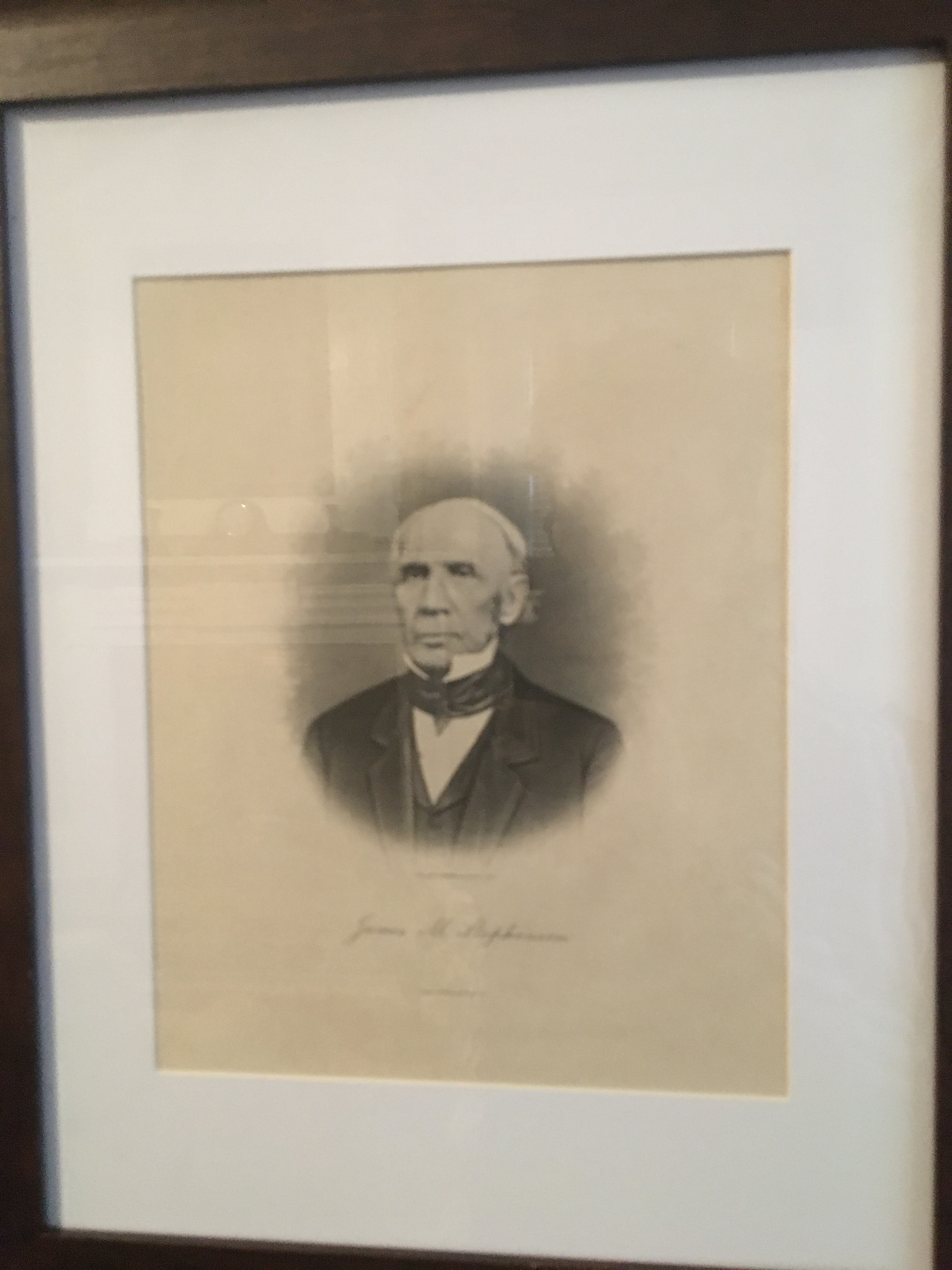 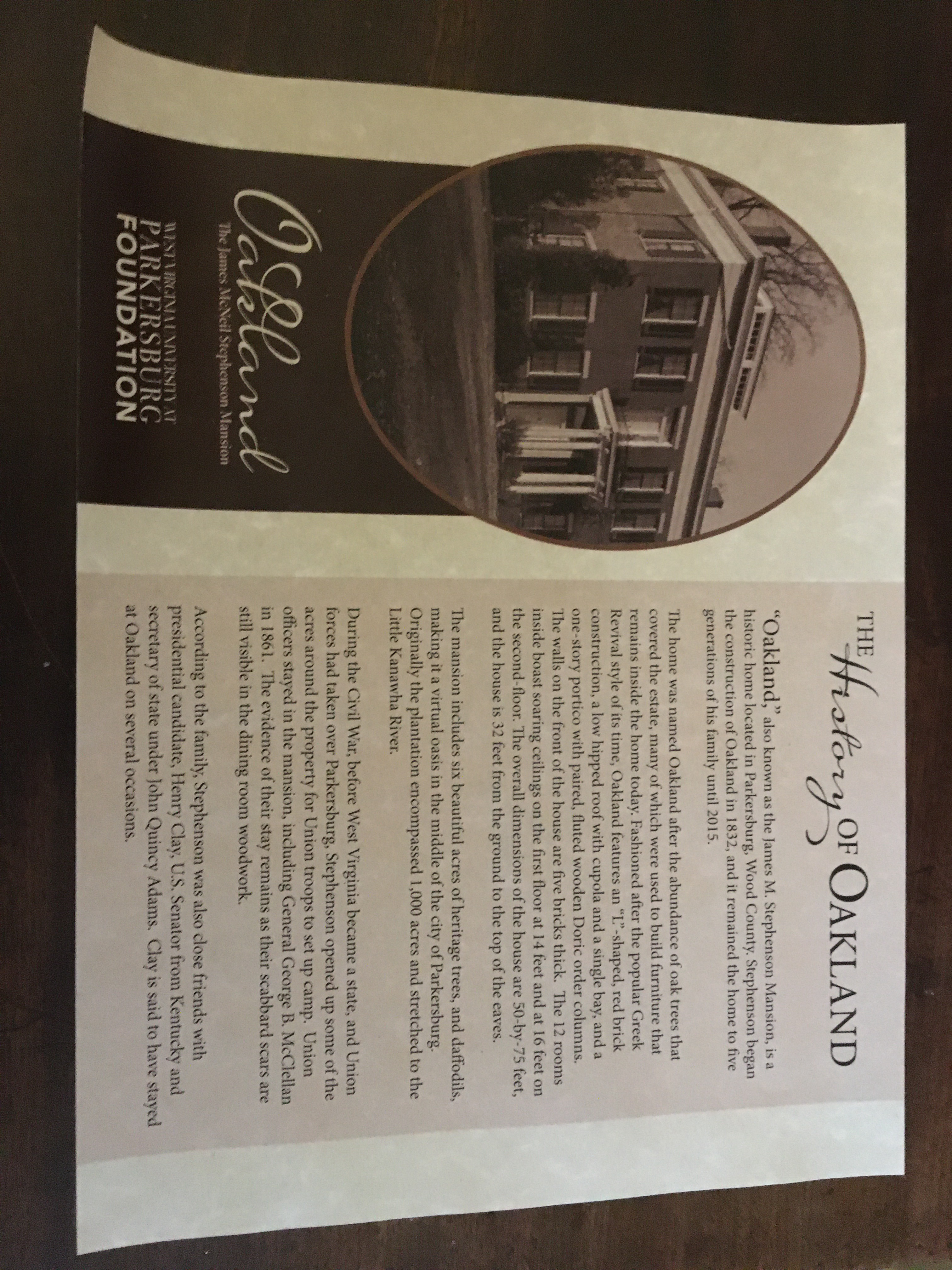 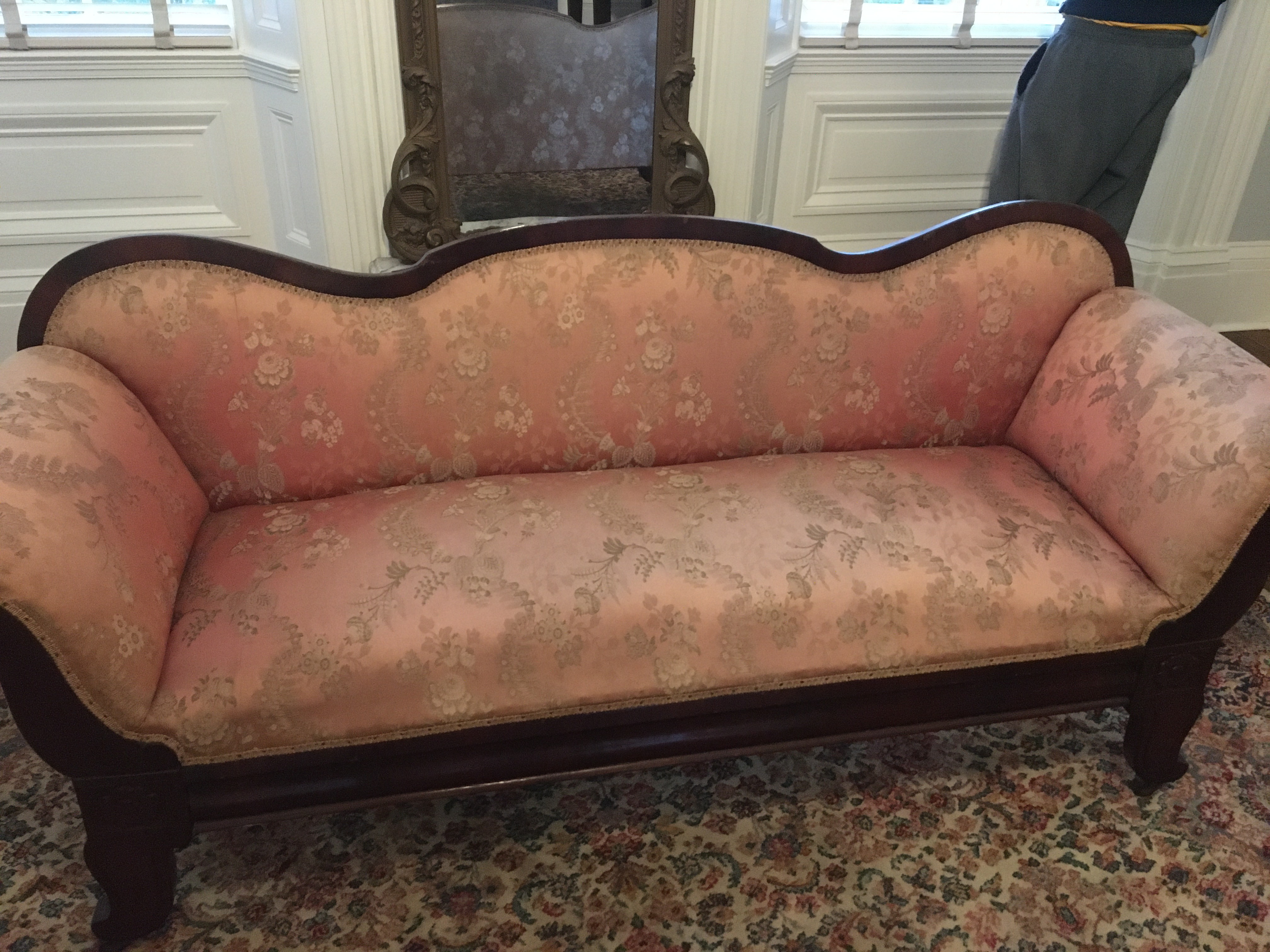 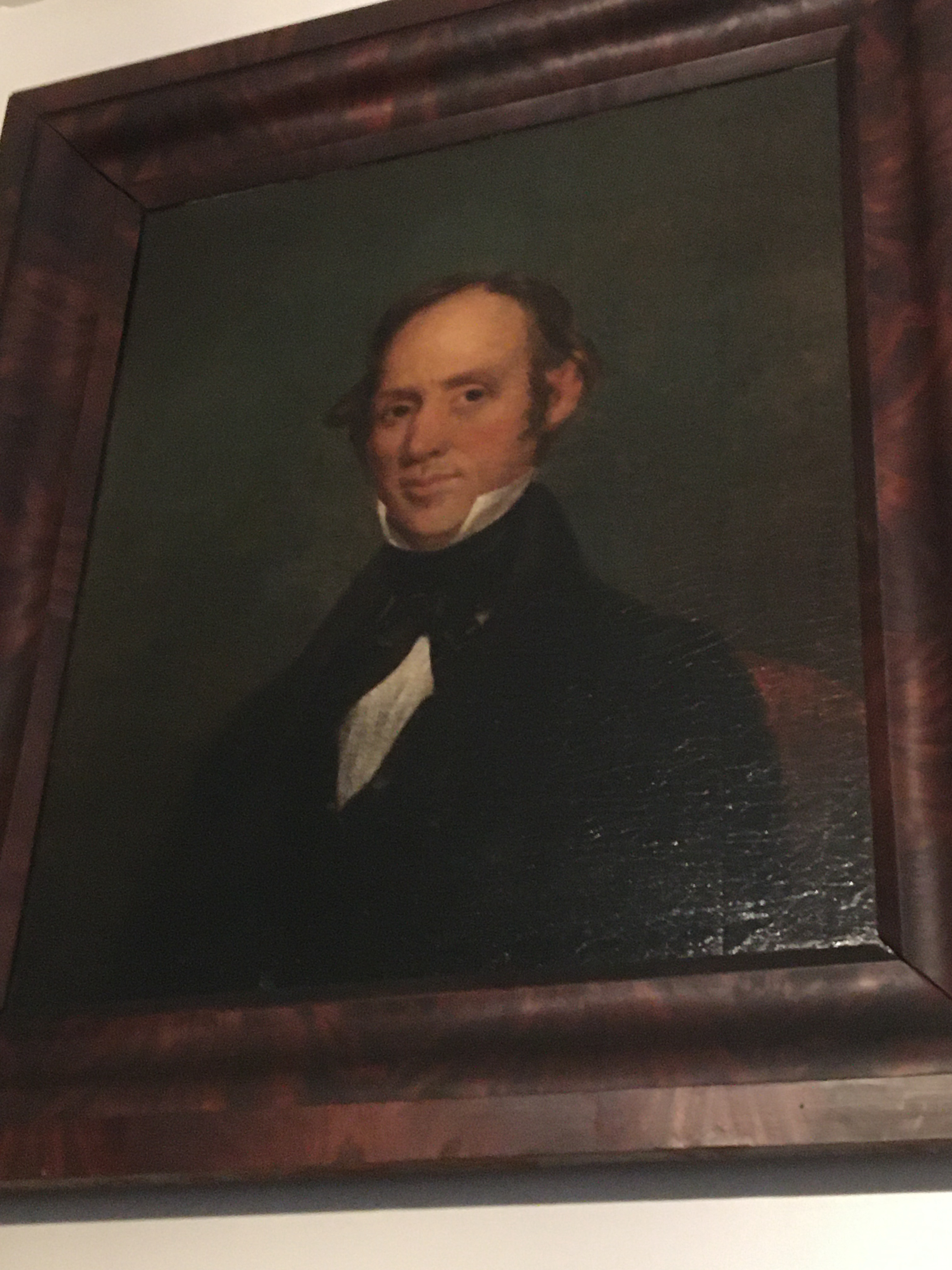 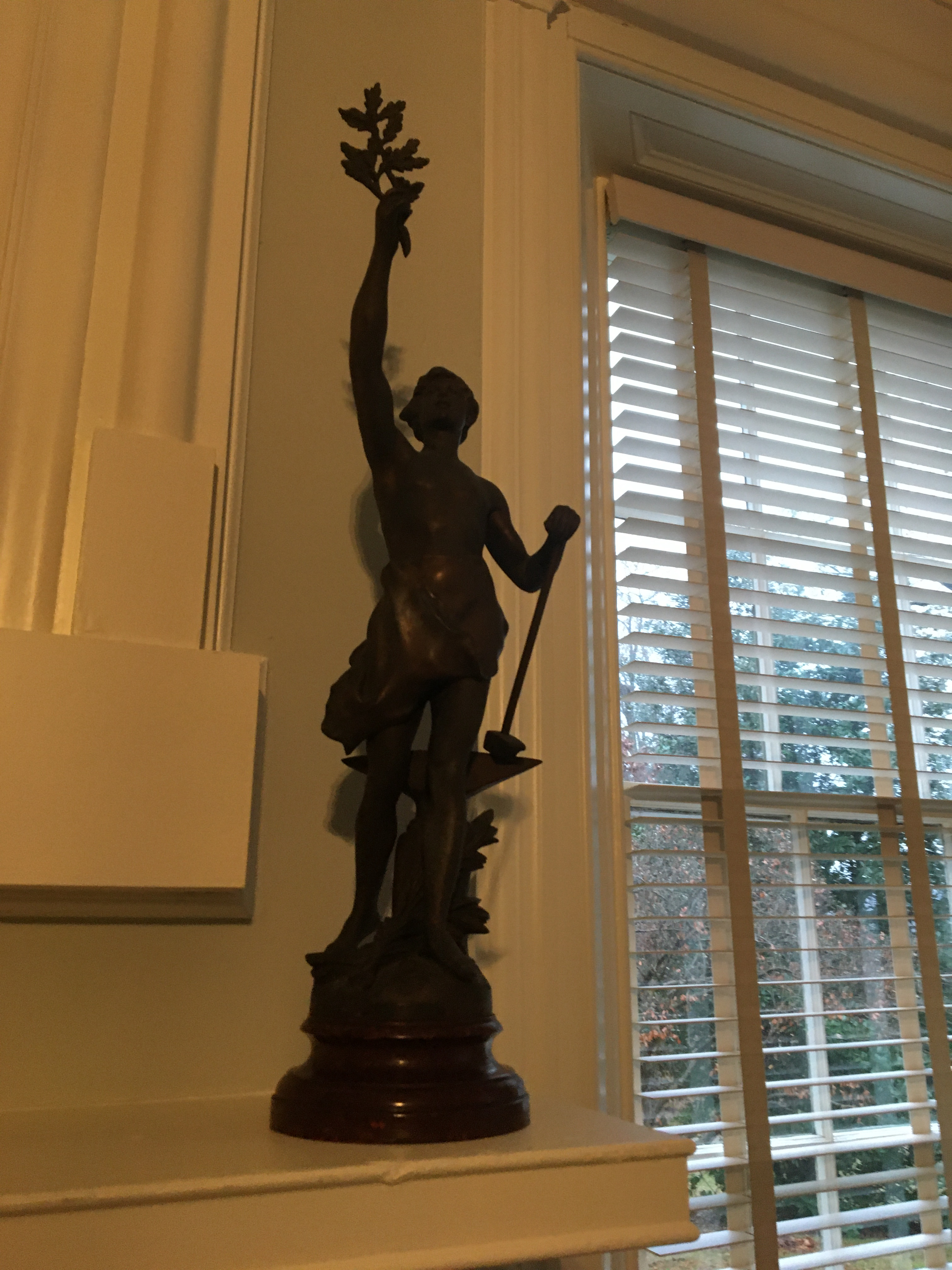 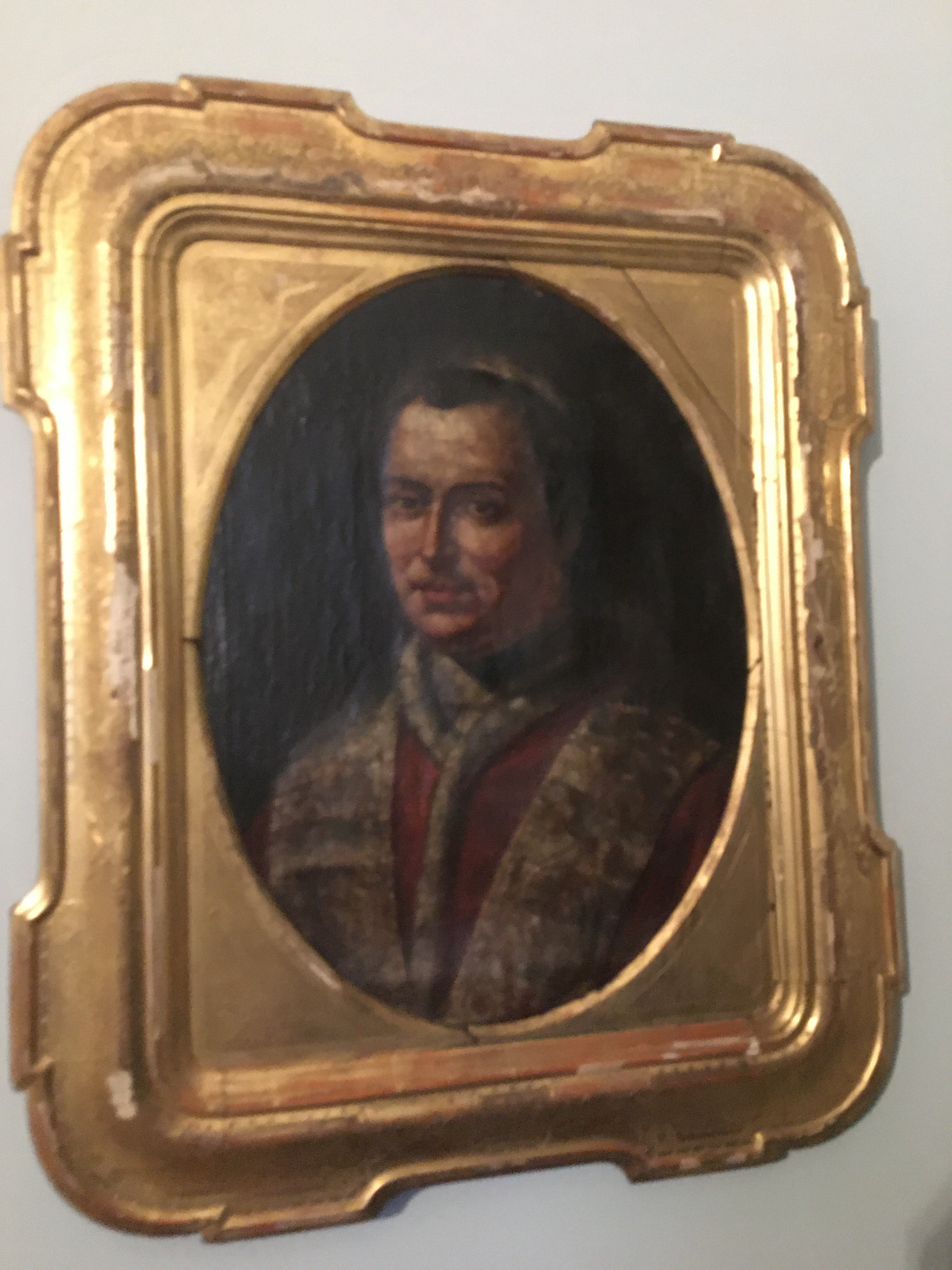 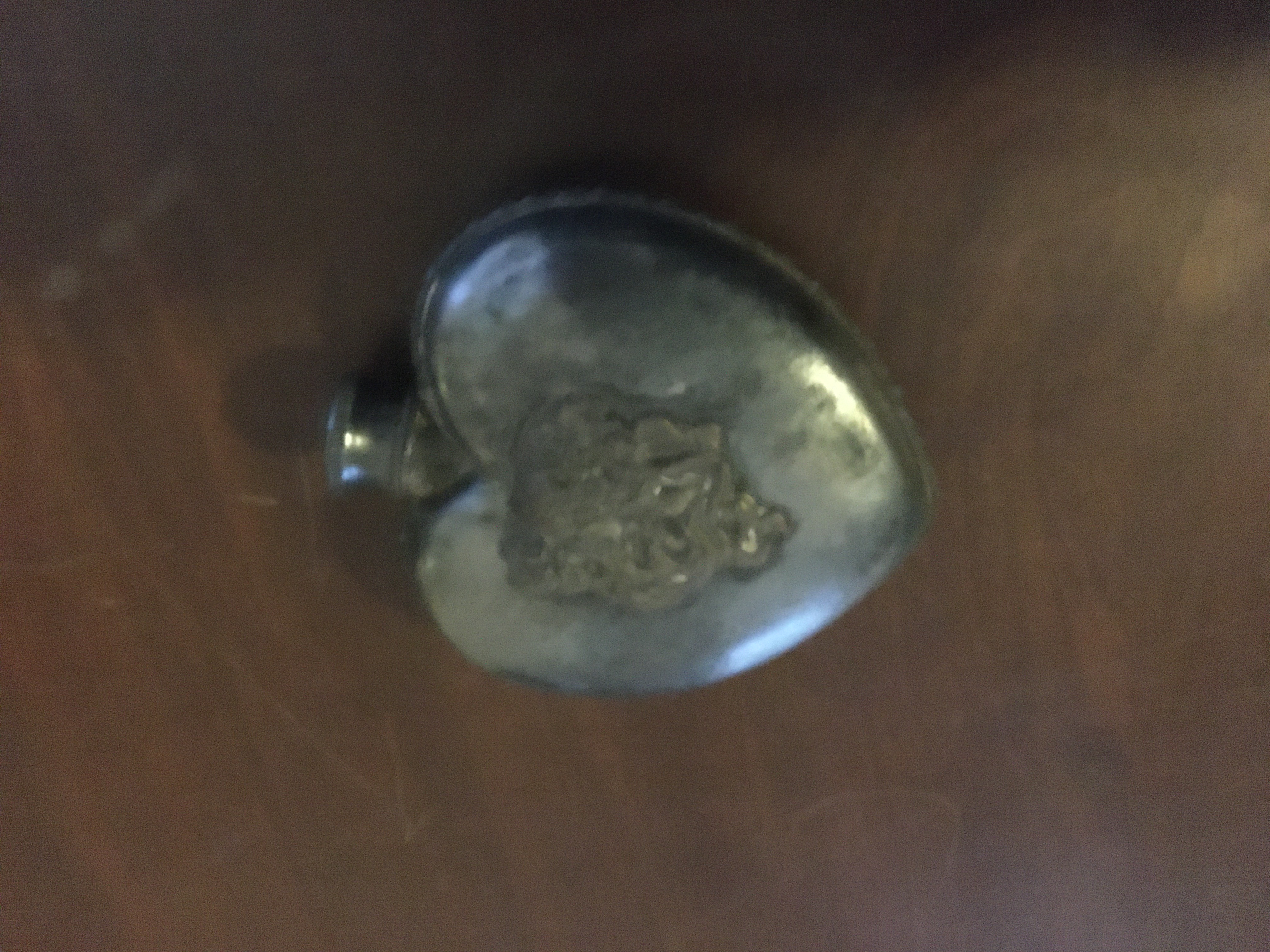 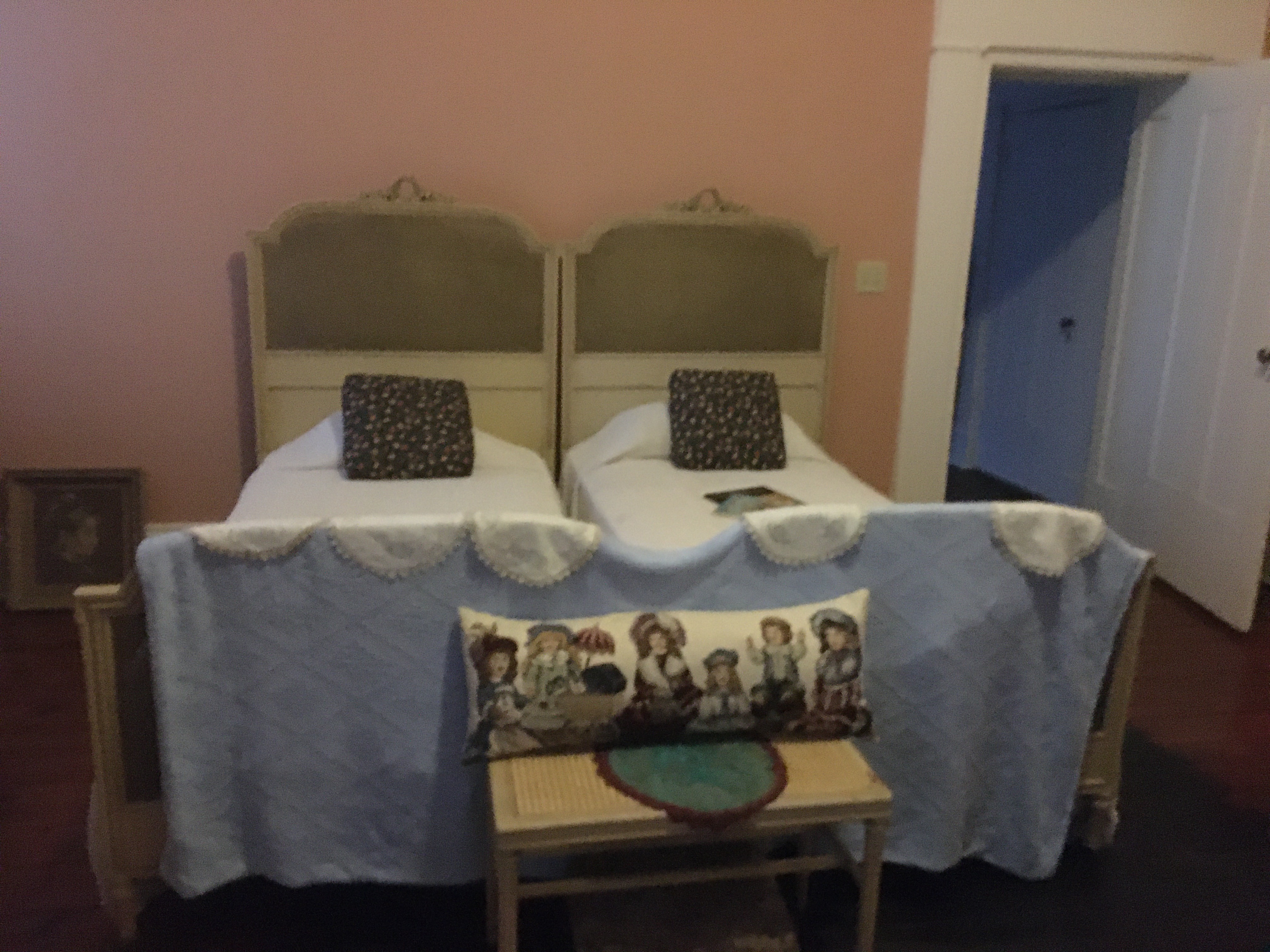 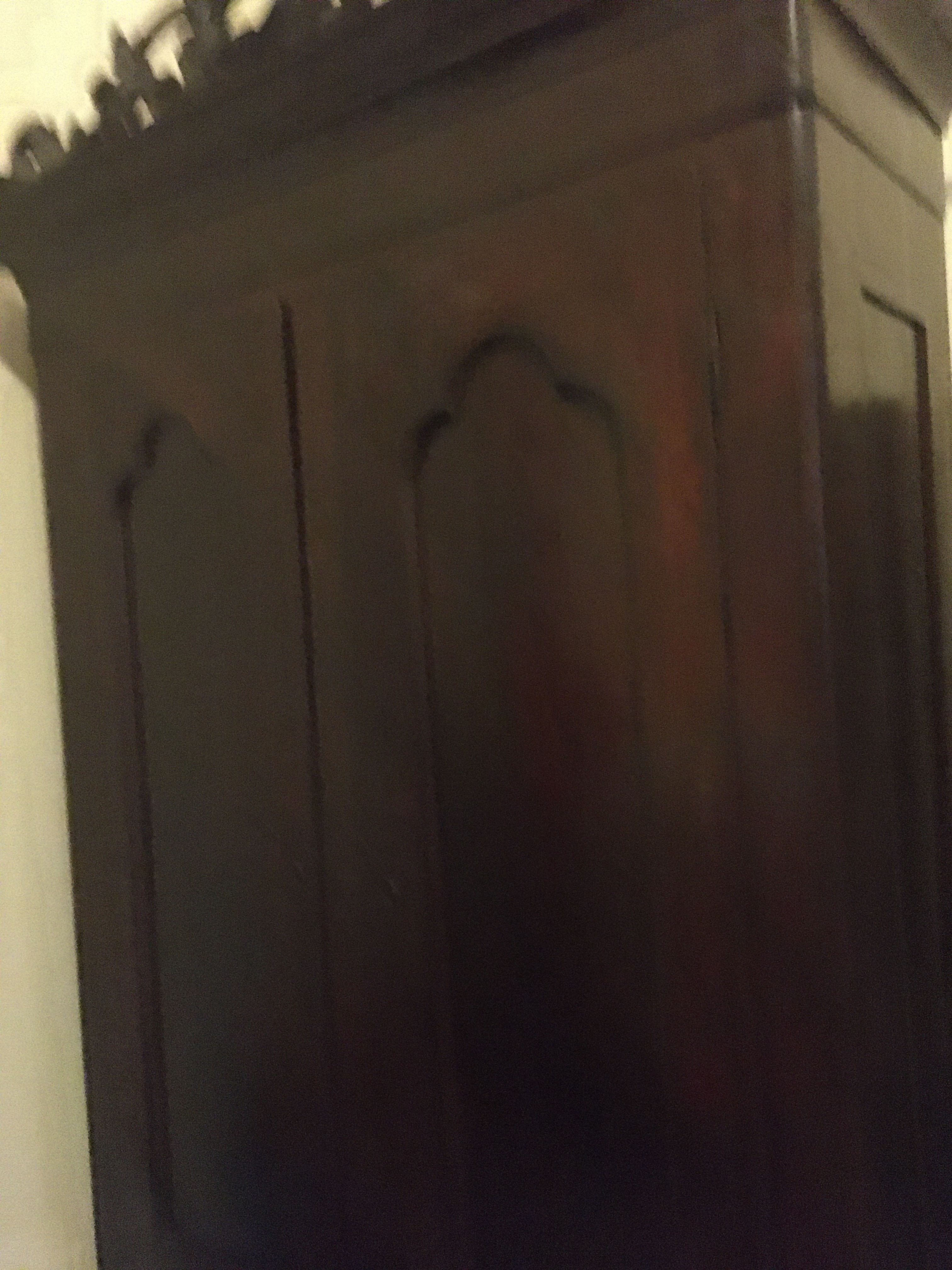 The grace of a family pet 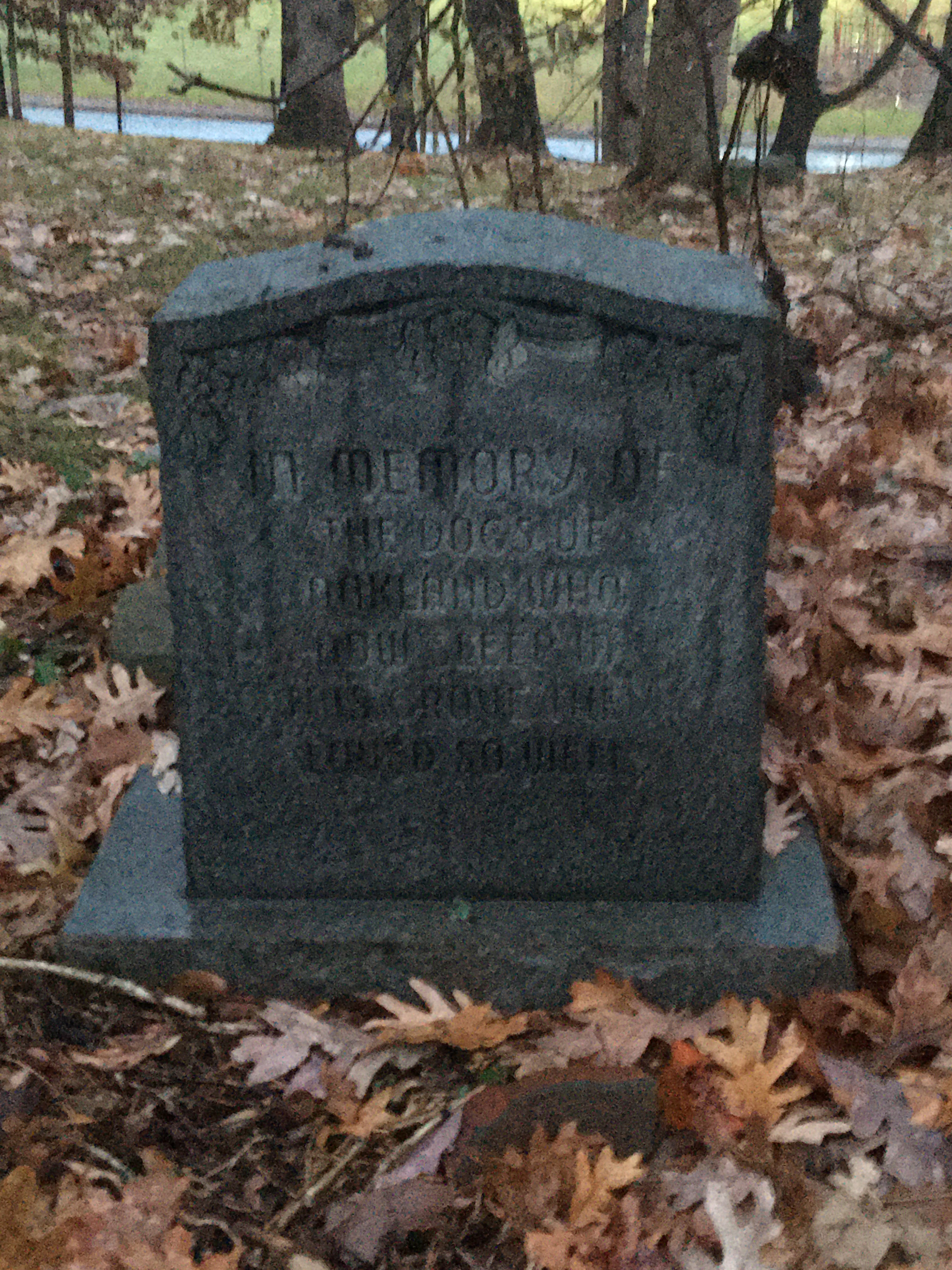 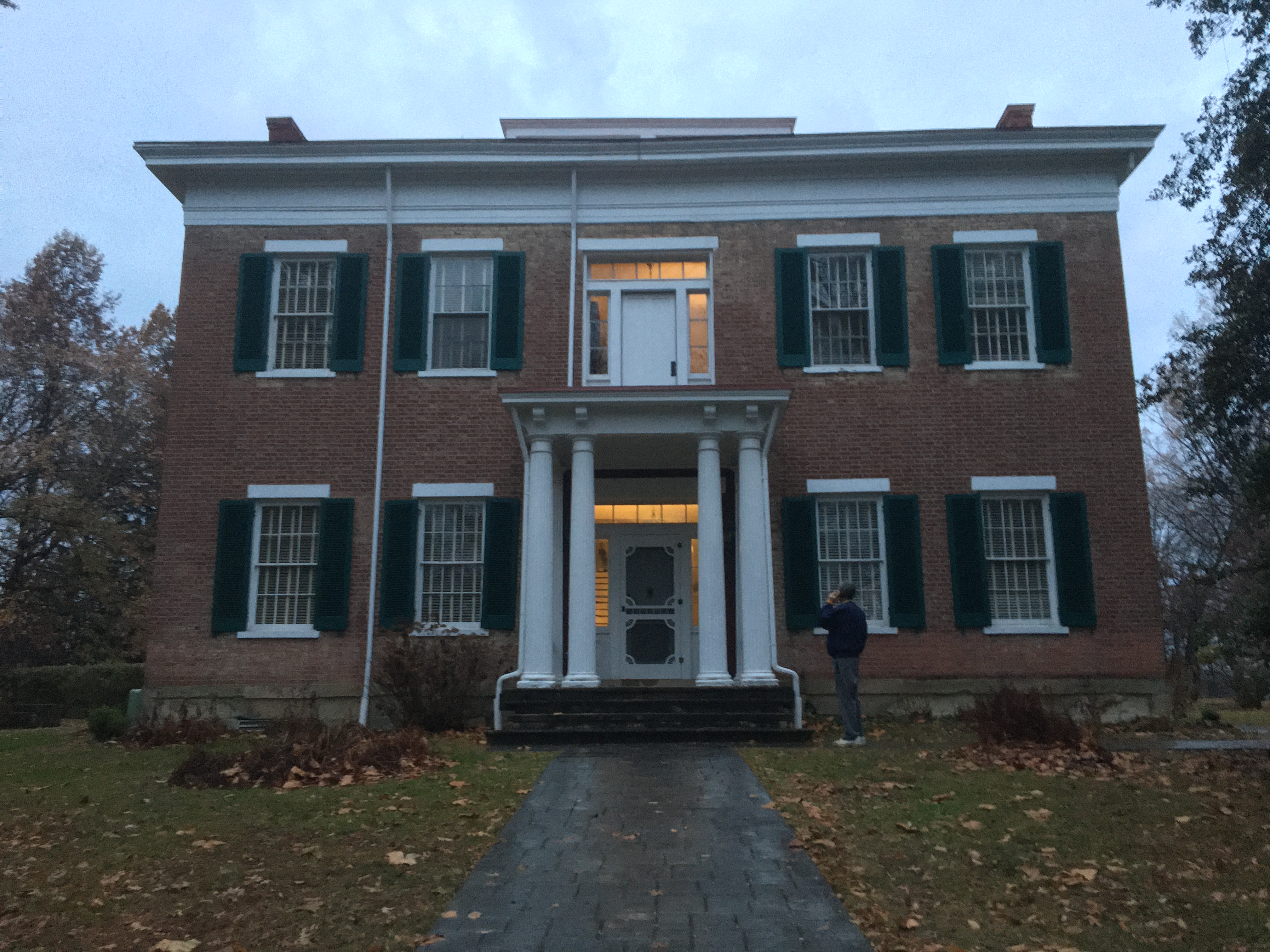 James McNeil Stephenson was born in 1796 in the state of Pennsylvania and then later migrated to a part of Virginia that one point would be West Virginia. He was a practicing tanner wanting to become a lawyer. He taught himself law through books and later took his BAR test to officially become a land lawyer. Stephenson then married Agnes Boreman in 1829, sister to Arthur Boreman, a founder and the first governor of West Virginia.

According to Arthur Boreman’s obituary, he was tutored by James McNeil Stephenson to be a practicing lawyer, they even shared a law practice Stephenson was a big part of West Virginia becoming a state as he was involved in the politics of the Virginia Assembly as was Arthur Boreman and other influential figures that was a part of dividing Virginia land into West Virginia land. Stephenson was also involved in politics as a delegate for the Virginia House of Delegates representing Tyler, Wood, Ritchie, and Doddridge counties for almost two years and was there mainly to argue for improvement to western Virginia.

Most of the improvements involved that James McNeil Stephenson wanted to the area revolved around trade in Parkersburg. The Northwestern Virginia Turnpike, the Staunton-Parkersburg Turnpike, the James River and Kanawha Canal, and the Northwestern Virginia Railroad were built partly because of him. The turnpikes passed in front of his house of course and he even gave up part of his property to have those built. He was also responsible for fixing banking in Parkersburg and became the founder of the Northwestern Bank of Virginia which is now a part of United Bank. All in all, James McNeil Stephenson left a legacy in West Virginia and Parkersburg that had a huge impact on the growth of the area and died in his home on April 16th, 1877.

The Stephenson Mansion, or Oakland some may call it, was established in 1840 by James McNeil Stephenson. He owned a large amount of property near where he established his house, about a mile in each direction is what he owned, and he even owned more than that through the entirety of Wood County and West Virginia. The architecture was of Greek descent and the rooms ceilings were high. The 1st floor had 14-foot-high ceilings while the 2nd and 3rd floors both had 16-foot-high ceilings. There haven’t been many renovations done on the house except for the kitchen in the 1900s, so most of the original house is still intact. The name Oakland comes from the trees surrounding the property and how the house was completely built by materials surrounding the hill that the house stands on. From the artifacts left by the Stephenson family, it was not hard to tell that they were a well-educated family due to the old collections of books lining a lot of the walls in the house. They’re wealthy status was also portrayed through the art and portraits hanging in each room. Some artifacts were of foreign origin which leaves to speculation that they travelled a lot or were interested in foreign cultures. Religion was also an important factor in their lives as there was a portrait of the pope, at the time the portrait was made, lined completely in gold. The Stephenson’s were successful because they were educated.

The Stephenson Mansion was passed down throughout the generations and was finally given up by the owners to a historical society as the owners wanted to sell it because they had no use to it anymore. The mansion is located at 1131 7th St. Parkersburg, West Virginia, and is nestled in a grove where the public eye can barely see. It is now taken care of by the West Virginia University at Parkersburg Foundation to preserve the important history that is there.