Parkway Village, a network of two- and three-story Colonial style apartments, was built in 1947 to house employees of the newly formed United Nations. At the time, the fledgling organization was based on Long Island. The units have housed numerous diplomats as well as public figures, including Roy Wilkins of the NAACP and Betty Friedan. The village is listed on the National Register of Historic Places. 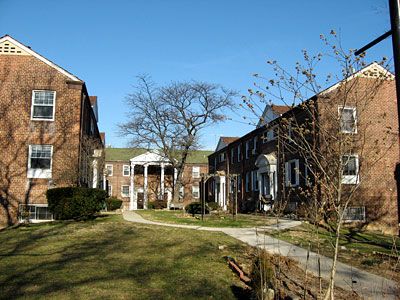 In 1946, as the world was just beginning to recover from World War II, numerous cities from around the world promoted themselves as possible locations for the headquarters of the newly-formed United Nations. Many Europeans felt that they had a unique need to have the headquarters based on the Continent, while many in the United States felt that Europe, still in disarray following the war, was in no state to house an organization focused on peace.

Within the United States, numerous cities made their case to be chosen, with Philadelphia and New York City emerging as the likeliest choices. Largely because of the efforts of the Rockefeller family and Robert Moses, the city's "master builder," New York was eventually chosen. This was due, in no small part, to the donation of a 17-acre site by John D. Rockefeller and the availability of suitable housing for UN employees.

Moses worked with a number of banks to develop a site in Kew Gardens, Queens, for housing. The result was Parkway Village, 109 buildings located on 35 acres. The UN had contracted with other housing developments in the city to provide housing for its personnel, but those developments could deny housing to potential residents on the basis of race or national origin, a practice that the UN strictly forbade. Consequently, the new development was one of the first in the city to be fully integrated and international.

The new property was owned by the banks, which leased it to the United Nations. The terms of the lease required that the property could rent to United Nations personnel as well as veterans of the war. The majority of the earliest residents were affiliated with the UN. When the lease expired in 1953, the village became a regular development which was open to anyone, but it still retained its international character.

Former residents of Parkway Village remember it as a welcoming, community-focused neighborhood where picnics were common and fences between homes were rare. Not only was the village highly diverse and international, it was an unusual mixture of ordinary working families and public figures, including Roy Wilkins, Executive Secretary of the NAACP, well-known feminist Betty Friedan, and Ralph Bunche, a diplomat and one of the founders of the United Nations. Bunche was living at Parkway Village when he won the 1950 Nobel Peace Prize for his mediation in Israel.

In 1983, Parkway Village became a co-op and the development became largely owner-occupied. UN personnel make up a much smaller percentage of residents today than they did in Parkway's early years, but it remains an unusually diverse community, even by the standards of New York City. The development was added to the National Register of Historic Places in 2012.