The National Naval Aviation Museum is operated by the Navy. In addition to being one of the leading tourist destinations in North Florida, the museum preserves the history of naval aviation through exhibits and static displays of historic aircraft. Highlights of the museum include artifacts from historic ships such as the USS Enterprise.

Visitors to the National Naval Aviation Museum are greeted by a F-14A Tomcat. The museum offers free admission and parking. 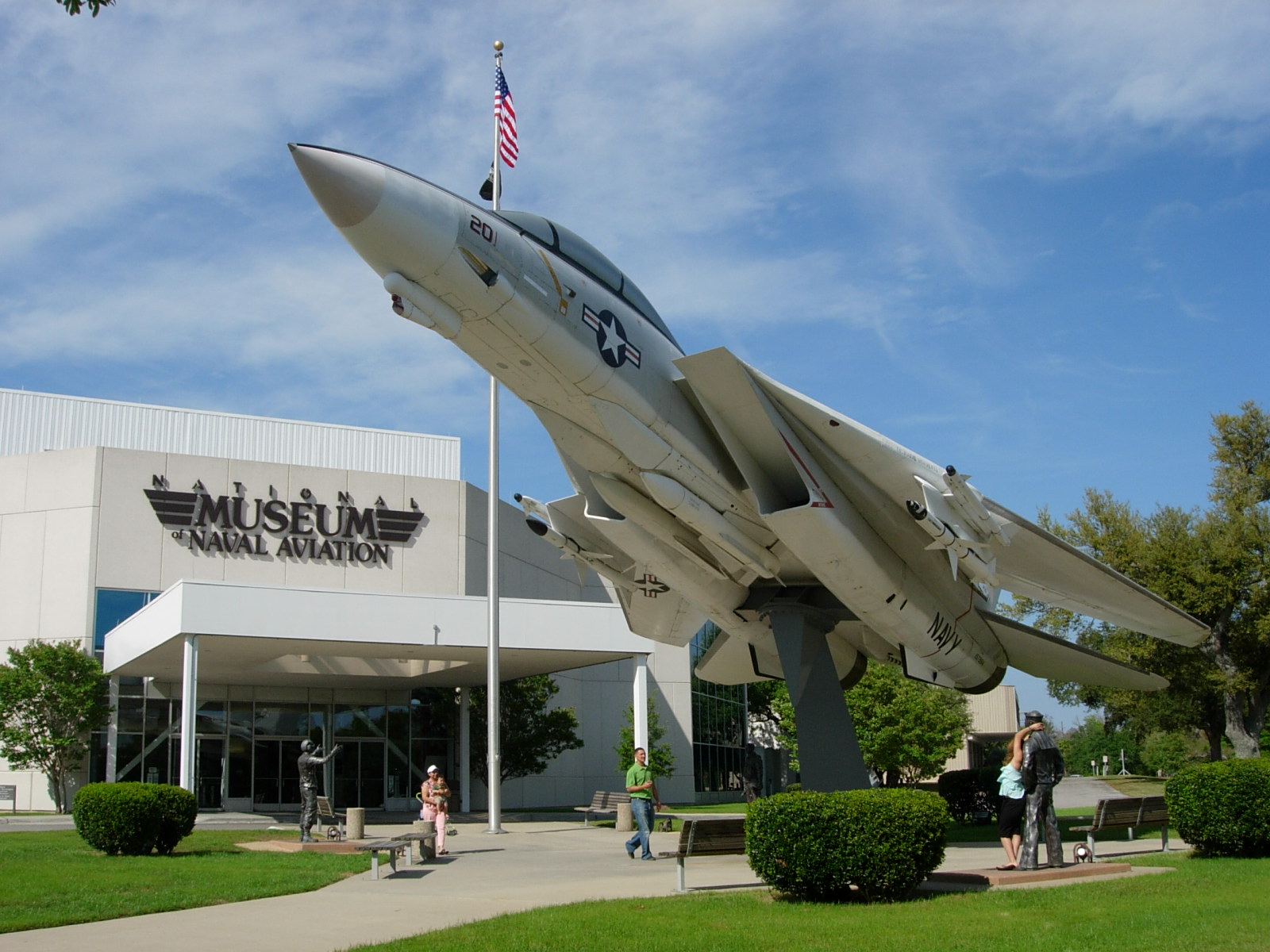 A view of some of the exhibits inside the museum. 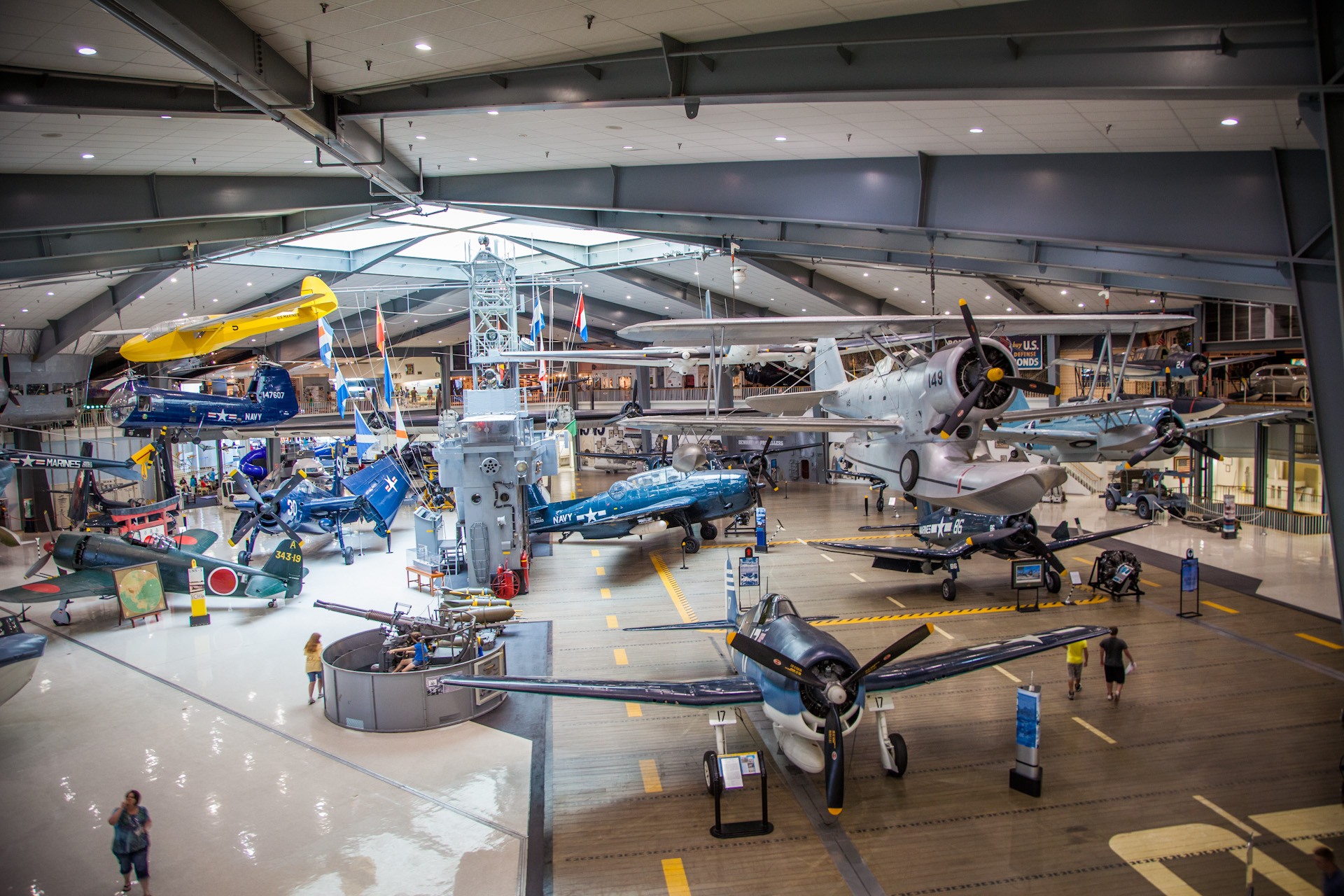 The Blue Angels Atrium of the museum 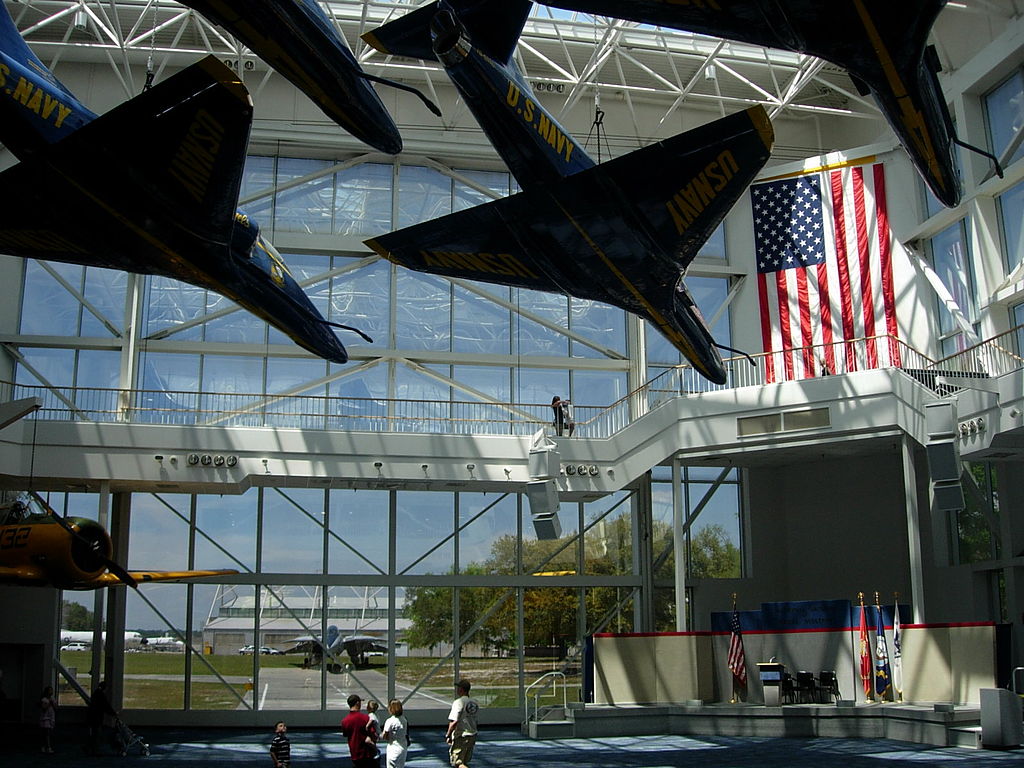 At the core of the Museum's collections are more than 700 aircraft, most of which are on display at other museums, with approximately 150 located aboard Naval Air Station Pensacola. These include record-setting aircraft like the NC-4 flying boat, the first plane to fly across the Atlantic, as well as combat veterans, including the SBD Dauntless that flew at the Battle of Midway, two Vietnam MiG-killers, an A-7 Corsair II that logged missions over Iraq during Operation Desert Storm and the last F-14 Tomcat to fly a combat mission.

Though the aircraft are the largest of the Museum relics, they are just one dimension of the collection. More than 4,000 uniforms, flight gear, weaponry, medals and decorations add a personal touch to the story of Naval Aviation. In addition, the Emil Buehler Naval Aviation Library, which houses personal and official papers of prominent Naval Aviators, squadron records and a photograph collection numbering more 350,000 images, is a significant repository of Naval history and draws researchers from around the world.

As the Museum has grown, so has its popularity. In the last decade alone, visitation has more than doubled, approaching one million in some years. The National Naval Aviation Museum has achieved recognition as one of the world's premiere air and space museums and one of the most-visited museums in Florida. The Museum also received the prestigious American Association of Museums' accreditation in 2002. Our visitors come from every state in the Union and more than 60 foreign countries. On a given day, more than 70 percent of our visitors are from outside Florida. With each addition to the Museum, there has been a commensurate increase in visitation.

Highlights of the museum include exhibits related to historic vessels such as the USS Midway and Constitution that are floating museums in various port cities. The museum also includes exhibits based on artifacts of ships that were lost in battle or decommissioned such as the USS Enterprise. The aircraft carrier USS Enterprise (CV-6) served in the United States Navy from 1936 to 1960. She became famous during World War II, participating in every major battle of the Pacific Theater and becoming the most decorated ship of the war. She was present during the Japanese attack on Pearl Harbor, participated in the U.S. victory at Midway, supported offensives throughout the southern and central Pacific, and saw her final actions near Iwo Jima and Okinawa.

By the end of 1945, more than twenty large, more advanced carriers made up the US Fleet. The damage inflicted by the kamikaze strike on May 14, 1945 coupled with the increase in jet technology were too much for the Enterprise. On January 18, 1946, the USS Enterprise entered the New York Naval Shipyard. A year later, on February 17, 1947, the Enterprise was decommissioned. Attempts to preserve the carrier as a museum ship were futile. Finally, on July 1, 1958, the "Big E" was sold for scrap at Kearney, New Jersey. Two years later, the world's first nuclear-powered carrier was commissioned under the same name as her predecessor: USS Enterprise (CVN-65). In 1984, a permanent exhibit was dedicated to the Enterprise at the Naval Aviation Museum at the Naval Air Station in Pensacola, Florida and houses artifacts, photographs, and other important items of interest from the carrier.

Museum operating hours are: Open Daily From 9 a.m. to 5 p.m