One of the earliest examples of large stone houses in western Pennsylvania, the Burtner House was constructed in 1821 by farmer Phillip Burtner. The property was the Burtner residence and farm for four generations before serving as a meeting place, voting station, and tax office for both the Old Deer Township (later named the West Deer Township) and Allegheny County. Between 1969 and 1972, the house garnered interest from preservationists when plans called for its potential demolition during the highway expansion. Local residents convinced the then-governor Raymond Shafer to declare the house a historic landmark in 1972. Later in 1975, the house was listed in the Pittsburgh History and Landmark Foundation. The house currently serves as a local history museum with artifacts and items used by the Burtner family. The property is also home to an annual strawberry festival and a harvest festival. 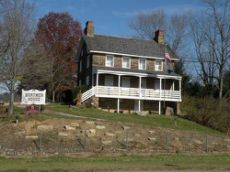 Burtner House in its Old Glory

In 1800, Farmer Phillip Burtner moved into a small cabin with the area, which was first opened for settlement. Along wife his wife, Margaret, the Burtner were one fo rat first settlers of the East Liberty, Allegheny County, Pittsburgh, PA. Burtner bought property and laid the cornerstone for his house in 1818. In 1821, the three-story house was finally completed. The stone house has a total of 20 double-hung windows and four single-hung windows. The house's facade has four base in the back and three in the back. There are two large stone chimneys on top of the gable roof, one on each side. Each chimney was originally originally connected to two small stone fireplaces. Along the stone work, the house also sports huge cornerstone designs made by tool marks to fasten the small stones at the corners. As personal touches, there are stones at each gable has the date of the house's completion etched in the stone, and the initials of Phillip Burtner are carved into the stone next to the front door.

The interior of the house consists of eight large rooms, including four bedrooms, a sitting room, a large room connected to the central hallway on the first floor, and the another room on the second room. The house was housed by the Burtner family for four generations, but the house also served multiple functions besides a farmhouse, such as a meeting hall and a voting station for both Old Deer Township (later named the West Deer Township) and Allegheny County. The house was used as a voting station until 1864. One of the meetings that were held at the house concerned the construction of the Pittsburgh Canal.

Between 1969-1972, the Burtner House gained interest and popularity to renovate the establishment as a historic landmark and save it from being demolished in order to make more space for the construction of the Pennsylvania Route 28 highway. As a response of the campaigns and petitions to save the Burtner House, then-governor Raymond Shafer passed the notion to list the house under the National Register of Historic Places in 1972 for its representation of stone housing in nineteenth-century Western Pennsylvania and its contributions for Allegheny County. The house's form for the National Register for Historic Places was prepared in hopes for the house to be renovated. Later, the house was also listed in the Pittsburgh History and Landmark Foundation in 1975. In addition, the road where the house is settled is named after the Burtner family, Burtner Road.