This historical marker shares the story of Midway, a small community within Woodford County surrounded by Thoroughbred Farms. Midway was founded by the railroad company in 1830. Today trains still run through the town which continues to serve as a regional city with a quaint downtown full of restaurants and antique shops that draw visitors to the city. 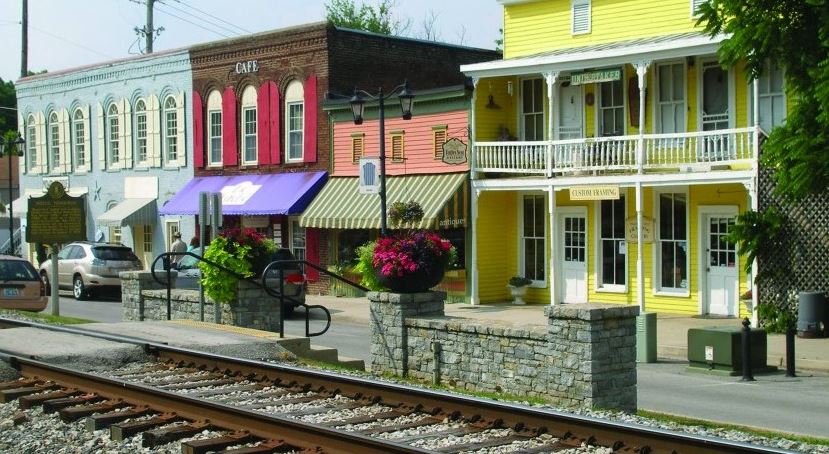 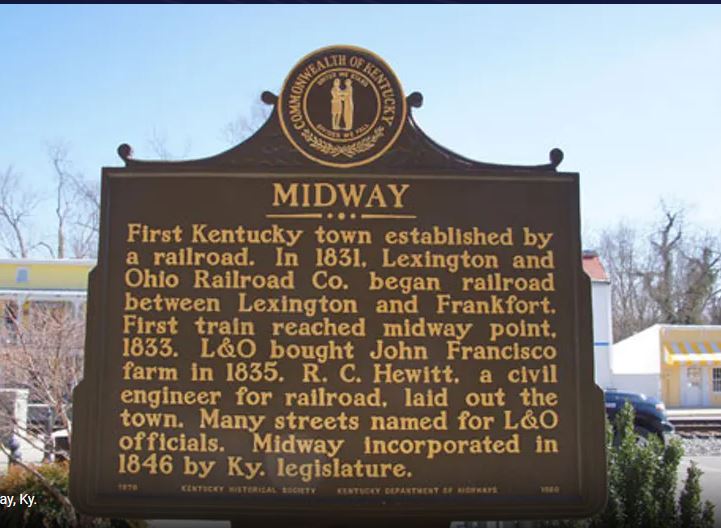 Historic Midway was the first town in Kentucky founded by a railroad, however the town’s history began long before that when the area was inhabited by Indian Mound Builders. Two large Indian mounds were found on farms nearby Midway, as well as several smaller such structures. Some still exist today. Settlers visited the area as early as 1771 when Kentucky was still part of Virginia.

45 years had passed before the town of Midway was put into existence. Then, when the Lexington and Ohio Railroad was incorporated in 1830, the town became a hub of activity with the accompanying construction. Lodging was needed for the railroad workmen as well as food, supplies, and other dry goods. By 1832, the railroad carried its first passengers from Lexington with horse drawn cars. The line was completed to Frankfort in 1834 and by January 1835 the first steam locomotive passed through Midway (also know as Middleway) from Lexington, bound for Frankfort. Both cities celebrated the successful journey of the “Iron Horse” with a grand ball. Many accounts of those early years of the railroad related tales of the engineers not only stopping for water and wood, but also to open and shut farm gates, since the train traveled through private pastures.

Midway continued to prosper along with the railroad. Electricity was introduced in 1911. In 1915, a fire destroyed a large part of the south side of Railroad Street. During the railroad’s heyday, the 1930’s and 40’s, up to 30 trains a day rumbled through the middle of town. The passenger trains dwindled until the old depot (located where the caboose now stands) was closed in 1963. The last passenger train traveled through in May 1971.

Revitalization and rebirth began in the mid 1970’s when several antique shops and galleries were established and the Midway I Village Guild was formed. In 1978, 176 buildings in Midway were placed on the National Register of Historic Places. Now, Historic Midway once again thrives and enjoys its present reputation as one of Kentucky’s favorite spots for antiques, crafts, gifts, restaurants, and clothing. Several freight trains still make use of the active tracks running through Railroad Street