The "Remembering Citizen Soldiers" statue is located in VFW Centennial Plaza, in front of the Veteran's of Foreign Wars headquarters in Kansas City, Missouri. The monument was sculpted by Jim Brothers and it was competed on October 5th, 2001. The statue was commissioned to honor the 100th anniversary of the Veterans of Foreign Wars.

This is the plaque that is under the statue 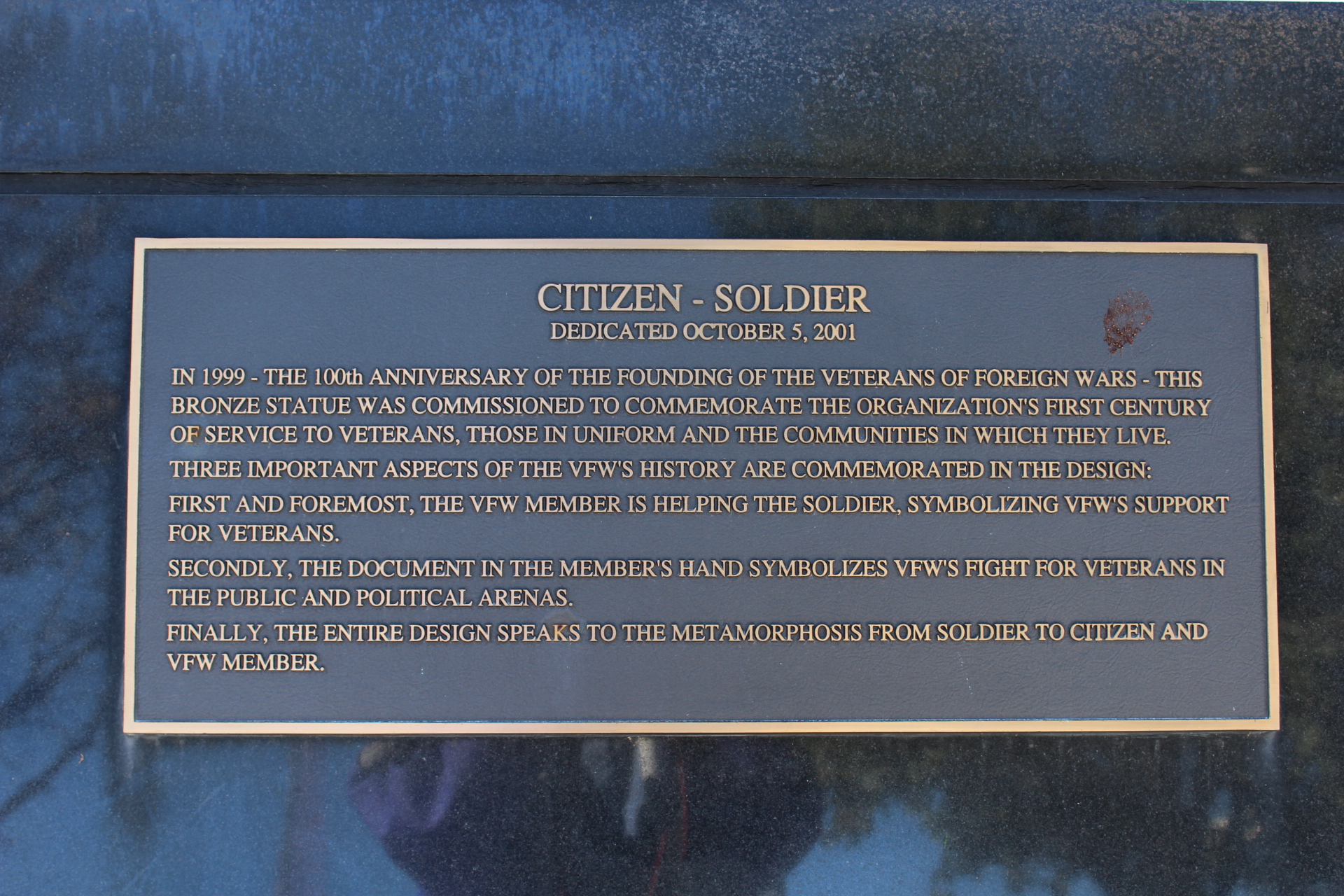 This is a picture of the statue 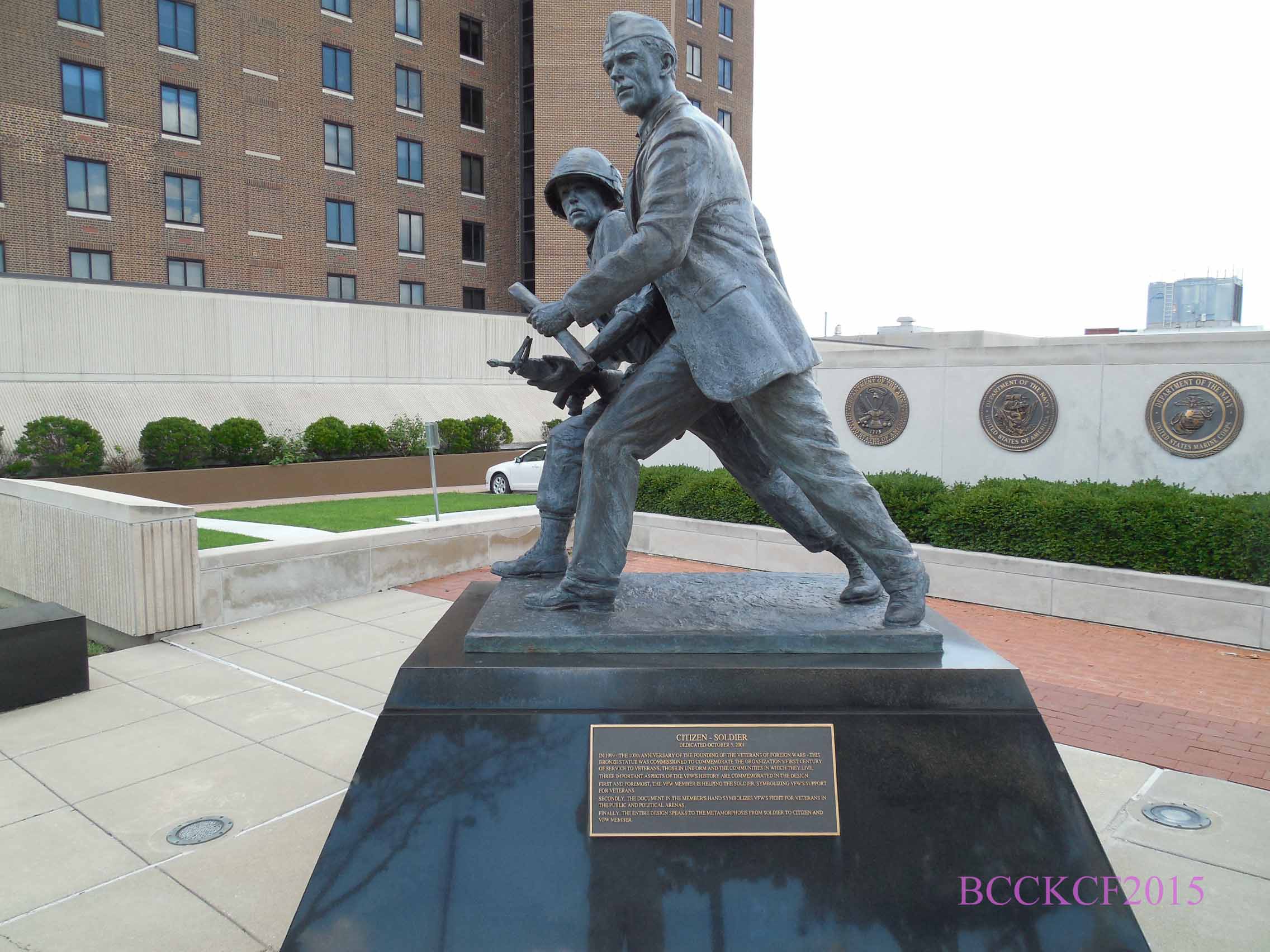 This is a side view of the statue 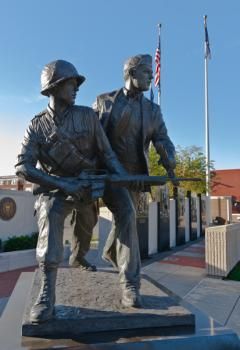 The VFW Centennial Plaza is dedicated to America's brave men and women who have served or are currently serving in the Army, Navy, Marine Corps, Air Force or Coast Guard. There are three parts to the Centennial Plaza.

The first part is the memorial wall. The plaque for the plaza as well as the seals for the five branches of the armed forces are mounted on the wall. Memorial bricks are in place between the wall and the concrete.

The second part is the Jim Brothers sculpture titled "Citizen Soldier." It was commissioned to celebrate the 100th anniversary of the founding of the Veterans of Foreign Wars. It commemorates the VFW's first century of service for those in uniform and the communities in which they live. The sculpture also highlights three important aspects of the VFW. First, the VFW member helps the soldier by supporting veterans. Second, the document in the member's hand symbolizes the fight for veterans in the public and political arenas. Third, the entire piece symbolizes the transition from soldier to citizen and VFW member.

The third part is the wall and fountains. There are five plaques showing different aspects of the VFW: Origins, Legislative, Remembrance, Community Service Ladies Auxiliary, and Future Vision. At the foot of the wall under each plaque are two small bubblers in a small pool. A walkway made up of memorial bricks lead up to the plaques and bubblers. A small wall hides the lower half of the wall and the fountains from the street and invites people to come up and take a closer look.

The Citizen-Soldier plays an interesting role in the commemoration of the Civil War. According to memory scholar, Kirk Savage, "common-soldier statues came about not to merely mend the nation’s grief, but to rehabilitate and modernize the figure of the citizen-soldier.” For soldiers, fighting in the war was something that took away their personal agency, these statues were an effort to give it back. In doing so, the statue plays into an idea known as the "Lost Cause."

The Lost Cause is a way that remembers the Civil War by focusing on things like honor and bravery, and forgetting things like slavery and emancipation. According to Savage, the monuments did this by standardizing them so that they could be built in both the North and South. Savage said, “monument committees were able to use local distinctions within the inscriptions and to the architectural features like uniform and pose, the important thing is to build a statue that conforms to the pattern.”

The Citizen-Soldier statue was born in time of great racial strife. The statue aimed to give back personal agency to those who fought in the Civil War but it often overlooked the African American soldier. By doing that, it reinforces the idea of the lost cause.

David Blight, “A Quarrel Forgotten or a Revolution Remembered: Reunion and Race in the Memory of the Civil War.” In Blight, Beyond the Battlefield: Race, Memory, and the American Civil War. University of Massachusetts Press, 2002.