The statue of Don Juan De Onate is a 12 foot tall bronze figure honoring the Spanish Conquistador. Don Juan De Onate was known best for discovering New Mexico and becoming Governor. The statue was made in 1991 but was not received well by Native American associations because of Onate's brutal history with the Acoma people. Onate was responsible for murdering more than 800 Native American's and enslaving 500 more. It has been vandalized several times since being made in a way to protest the statue. 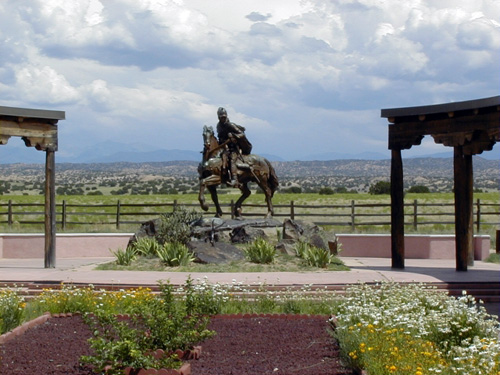 Vandalized statue of Onate in 1998 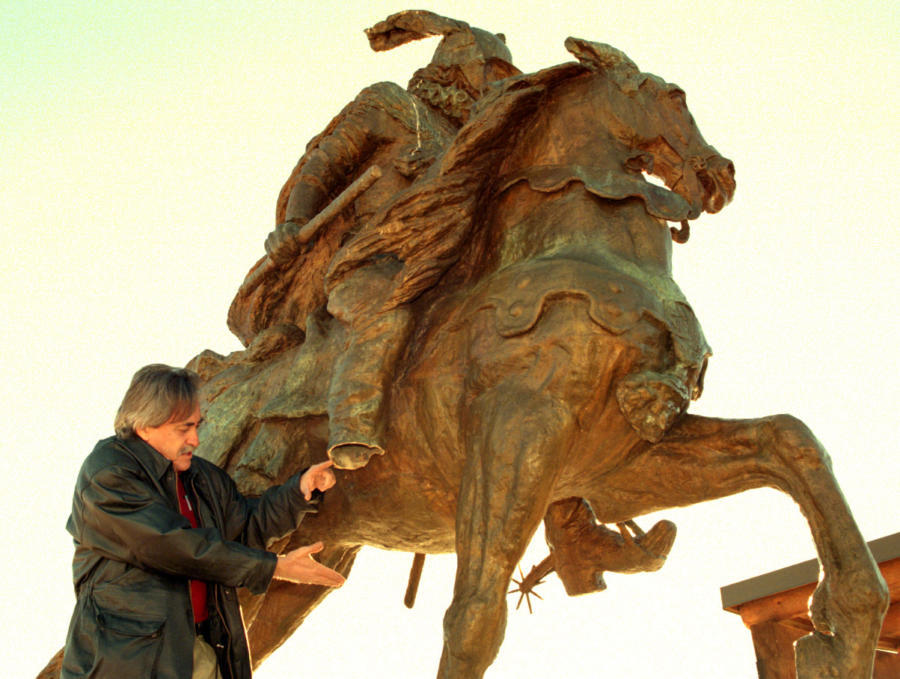 It is unclear why Don Juan de Onate got a statue honoring his actions. Saying this, in 1599 Spanish conquistador Don Juan de Onate invaded a village in what turned into modern day New Mexico. During this time Onate was responsible for murdering more than 800 Native Americans in the Acoma tribe. Not only did Onate kill these people he brutally cut off the feet of the up to 80 of the men. He then made the rest of the tribe slaves, and that number could have reached up to 500, many of them women and children. Fast Forward to 1991 when the statue was built and put in northeastern New Mexico, the artist who sculpted Onate, Reynaldo Rivera made him a large bronze heroic looking man riding a horse. In 1998, a group of protestors cut the foot off of the statue as a way to show the anger and frustration of honoring a mass murderer.

In January of 1998, a New Mexico reporter called the visitor center after receiving a tip that the statues foot had been cut off. The center had no knowledge of this and told the Albuquerque Journal that it wasn’t true. They later realized that this was in fact true after allegedly leaving the visitors’ center to visit the statue and seeing the foot gone. The group of people responsible for the vandalism has never been discovered, but the motive of it was clear. The groups supporting the Acoma people were quoted and said they don’t want to celebrate the 400th anniversary reminding them of the atrocities of what Onate did to the group of people. Then again in 2017, an anonymous group pained the foot of the statue red to resemble the feet that Onate cut off of the Acoma men.

Not only did the statue honor a man who committed genocide it also did not come cheap to the people inside the city. The statue itself cost $108,000 and the total for the visitor center was $1.5 million. The main funding of this project came from Rio Arriba County Commission. This legislation of this statue was introduced in the early 1990’s by Senator Emilio Naranjo. The legislation was soon after approved and the planning of the statue began by hiring hometown artist Reynaldo Rivera. The statue was finally created in 1991 showing how quick this process actually was. The speed at which this legislation passed shows the indifference the government has to honoring offensive men of the past.

If this statue represents anything it’s the lack of awareness government figures have when it comes to memorializing certain figures. They wanted to erase the fact that Onate Murdered a whole people and celebrate him for founding the city. However, the people of New Mexico would not allow the nation to forget the real man Onate was and represented. Onate is the man represented with this statue, but he represents hundreds of men that murdered and enslaved innocent people.

When it comes to groups defending the statue, Estevan Arrellano the visitor center director where the statue is located was quoted saying “Give me a break -- it was 400 years ago. It's OK to hold a grudge, but for 400 years?” Marc Simmons an author also said cutting the foot of overshadows Onate’s positive achievements.