Comprised of eight buildings, the Tuberculosis Hospital of Pittsburgh served as the headquarters for treatment and research performed by the Tuberculosis League of Pittsburgh during the early-twentieth century. Before the hospital's construction, tuberculosis was one of the major leading causes of death within Pittsburgh. The hospital began accepting patients after the completion of the first building in 1912, and soon, the hospital expanded with multiple buildings designated for specific purposes, such as a women and children's ward and a veteran's ward.The hospital was known for implementing a specialized for children suffering from tuberculosis and offering "Open Air Wards." During the 1930s-1950s, the hospital and other similar facilities aided in reducing the number of deaths caused by tuberculosis significantly.The Tuberculosis Hospital of Pittsburgh was added to the National Register for Historic Places in 1993 for its significance role in implementing advanced care to treat tuberculosis patients within the Pittsburgh during the early 1900s. 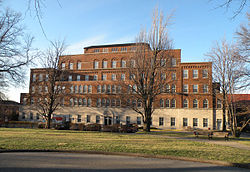 Advertisement on How to Prevent Contracting Tuberculosis 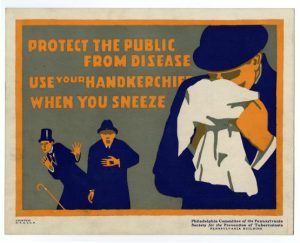 Robert Koch: The Man who Discovered the Pathogens of Tuberculosis

Patient During a Tuberculosis Examination 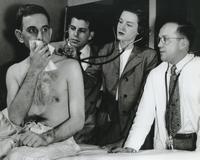 Child on the Porch of the Hospital

During the late-eighteenth and early-nineteenth century, pulmonary tuberculosis was the leading cause of death the within Pittsburgh area. Between 1890-1900, approximately 15,000 individuals in Pittsburgh died due to complications from pulmonary tuberculosis. In 1890, German scientist Robert Koch (1843-1910) uncovered pathogens associated with tuberculosis and other infectious diseases, such as anthrax and typhoid, thus leading to taking extra productions in preventing tuberculosis, such as producing antitoxins, filtering water through chlorination, and isolating tuberculosis patients. Even though there were remedies to help aid tuberculosis, the infectious disease still spread rapidly since hospitals were overcrowded and often unsanitary. Due to the increasing number of tuberculosis patients and how it easy it could spread, regular hospitals refused to admit anyone who contracted the disease, thus evoking the need of special facilities to care for patients.

The League's house expanded by constructing five shacks around the property, and each one housed 40 beds for patients. In 1912, the League contracted local architect R. B. Mellon to build the first building, the Power and Service Building, which served as a library and boarding room for the employees. Later on, the League added more buildings to accommodate different variations of patients suffering from pulmonary tuberculosis, such as women and children (Women's and Children's Building) and World War I veterans (the Christmas Seal Building). The hospital stood out from other tuberculosis facilities for two distinct reasons. First, the hospital was the first of its kind to implement a ward for children suffering from tuberculosis. Second, the hospital is the first tuberculosis care unit in Pittsburgh to have "Open Air Wards," which are facilities with large windows, doors, and open spaces that allow patients to breathe fresh air and ventilation and help their lungs function properly. In addition, the hospital offered lung screening tests for patients.

Around the 1920s, Tuberculosis Hospital of Pittsburgh expanded their number of beds from 140 to 430, which was still not enough for then a thousand patients on the hospital's waiting list. During the 1930s-1950s, the hospital and other similar facilities helped reduced the number of tuberculosis-related deaths. For example, by 1938, the death rate from tuberculosis had significantly decreased to 400 per year in Pittsburgh. Out of the entire nation, Pittsburgh experienced the fastest reduction in tuberculosis-related deaths than any other U.S. city.

Conversely, the hospital did experience a sharp decline in patients around the 1950s due to the rapid development of out-patient care and medicine. Eventually, the Tuberculosis League of Pittsburgh gave up their control of the hospital in 1955. Afterwards, some of the buildings were sold to the State. The buildings were later converted into a mental health treatment facility known as the Western Restoration Center, which operated until the mid-1980s. In 1993, the building that was once known as the Tuberculosis Hospital of Pittsburgh was listed in the Historic Register for Historic Places for its significance significance role in implementing advanced care to treat tuberculosis patients within the Pittsburgh during the early-twentieth century.