Hidden away in the back of D.B. Weldon Library, The Archives and Research Collection Centre (ARCC) houses the university’s special collections and archival material. Located in the heart of Western University in London, ON and open to both students and the general public, the ARCC is a beneficial resource to all who are interested in primary historical material. The two main sections within the ARCC are: The University Archives and the James Alexander and Elea Rea Benson Special Collections. The Special Collections includes rare books, maps, national or provincial documents, monographs and various physical artefacts. Beyond this, the ARCC is home to one of the largest repositories of rare anti-slavery books in all of Canada. Consisting of both primary and secondary documents, the extensive collection of anti-slavery material in the ARCC provides an opportunity for close historical analysis and develops a greater understanding of the initiatives pursued by individuals in abolitionist movements. In connection to other entries contributed by students at Huron University College, the ARCC contains accounts from prominent women who called for the dismantling of slavery. There has been little research done on the anti-slavery collection and this is partly due to its immensity. 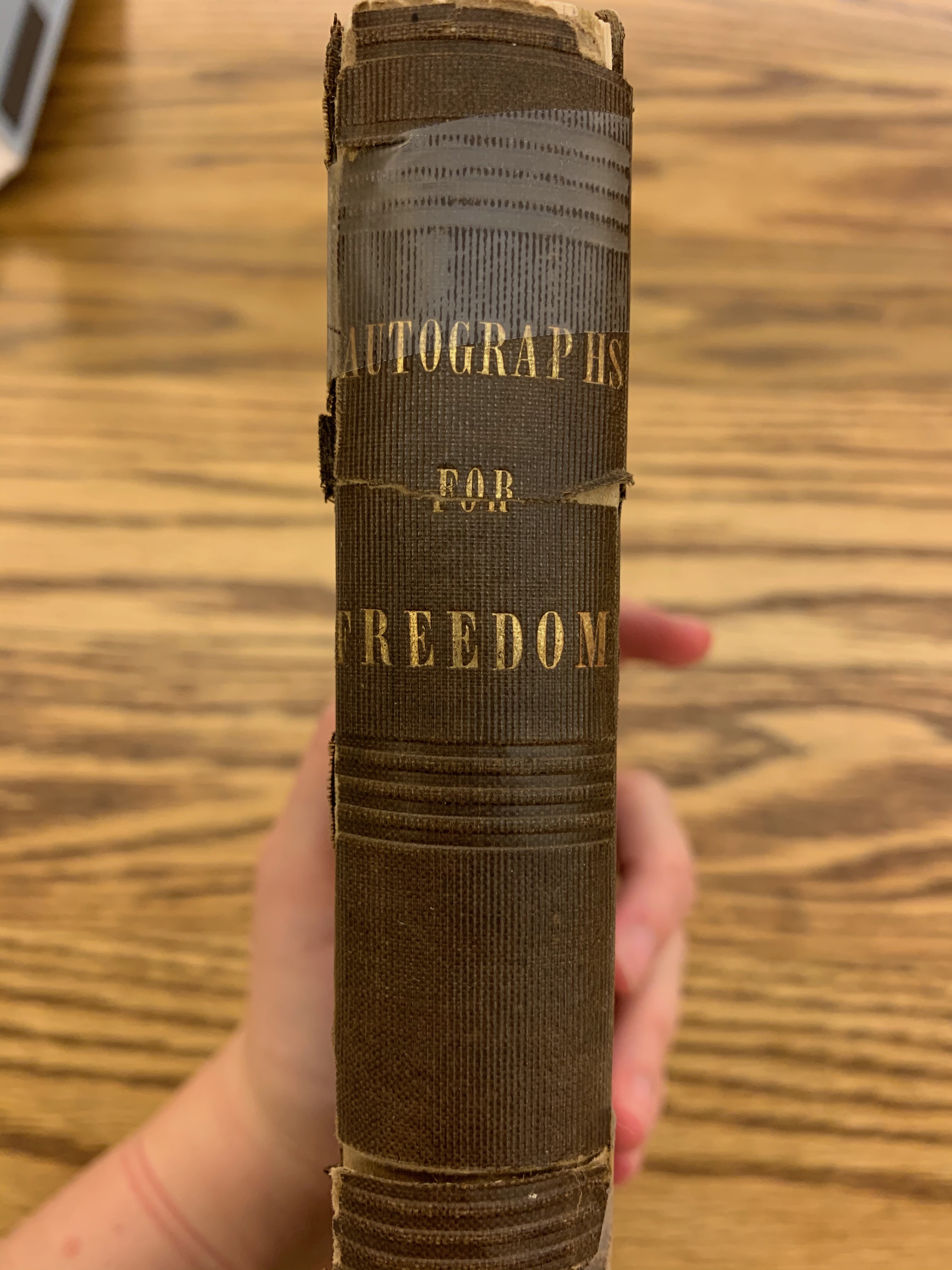 Opening Page in "Autographs for Freedom." 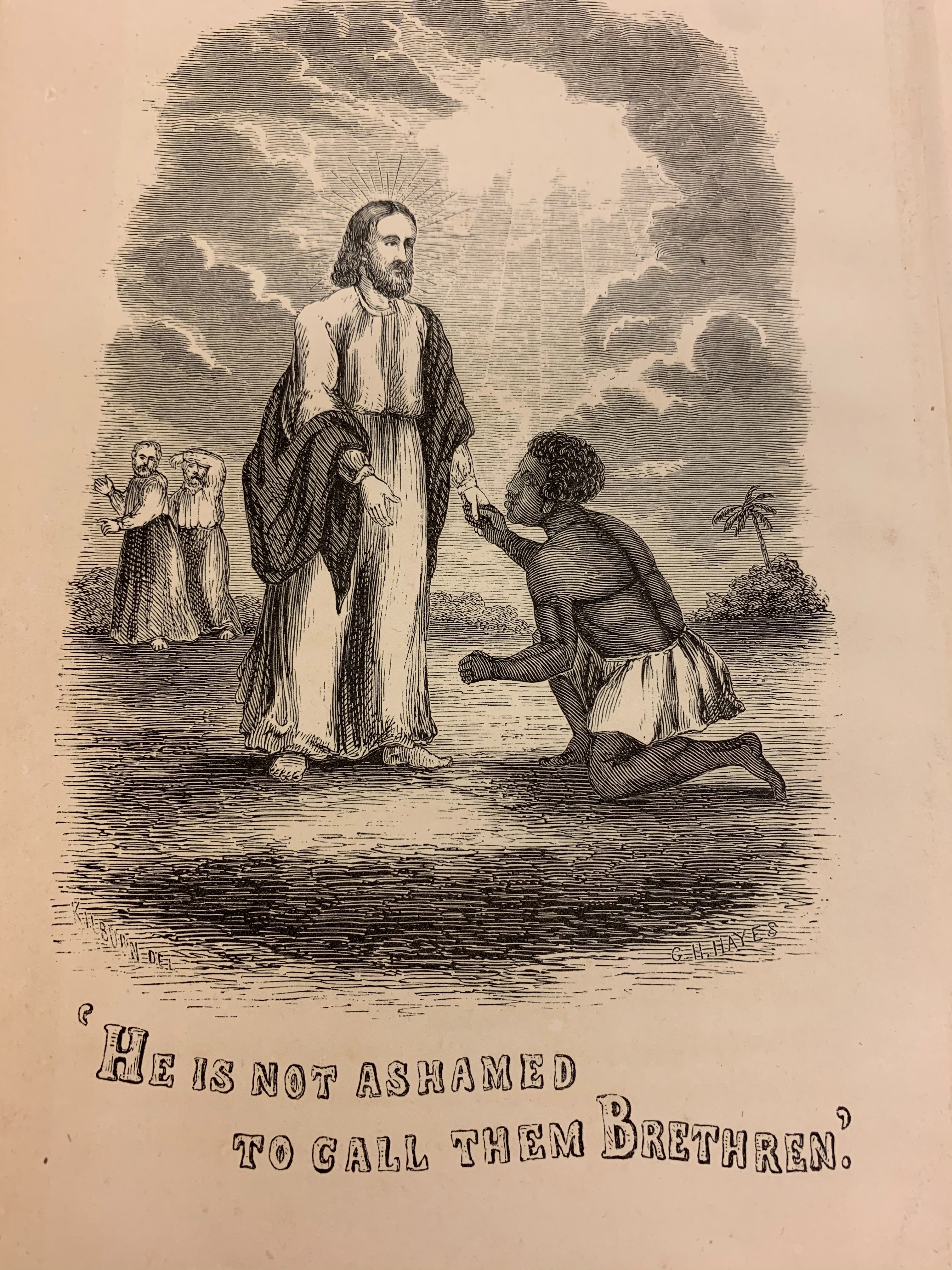 Preface by Julia Griffiths of the Rochester Ladies' Anti-Slavery Society in "Autographs for Freedom." 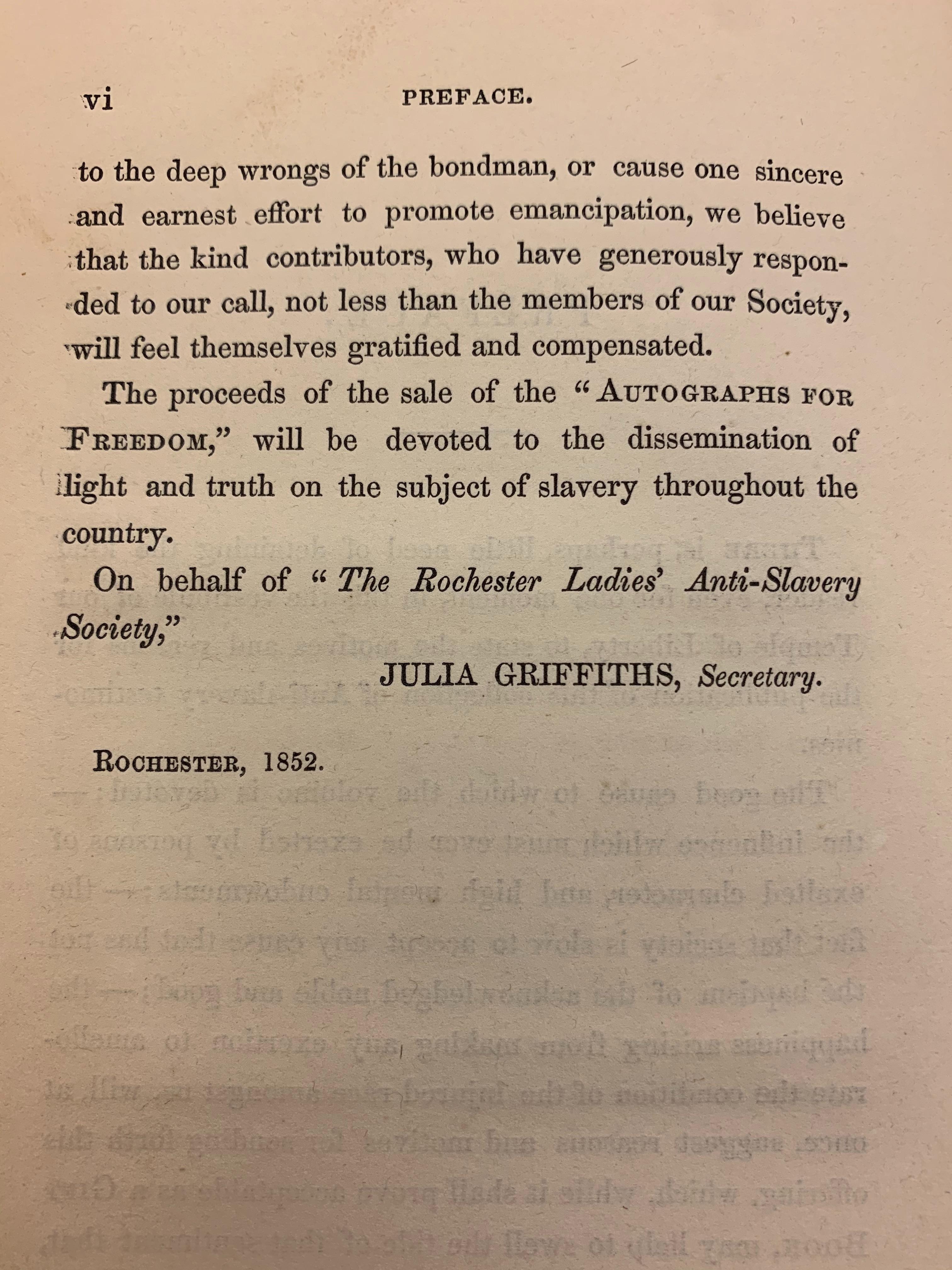 Annual Report for the Anti-Slavery Society of Canada. 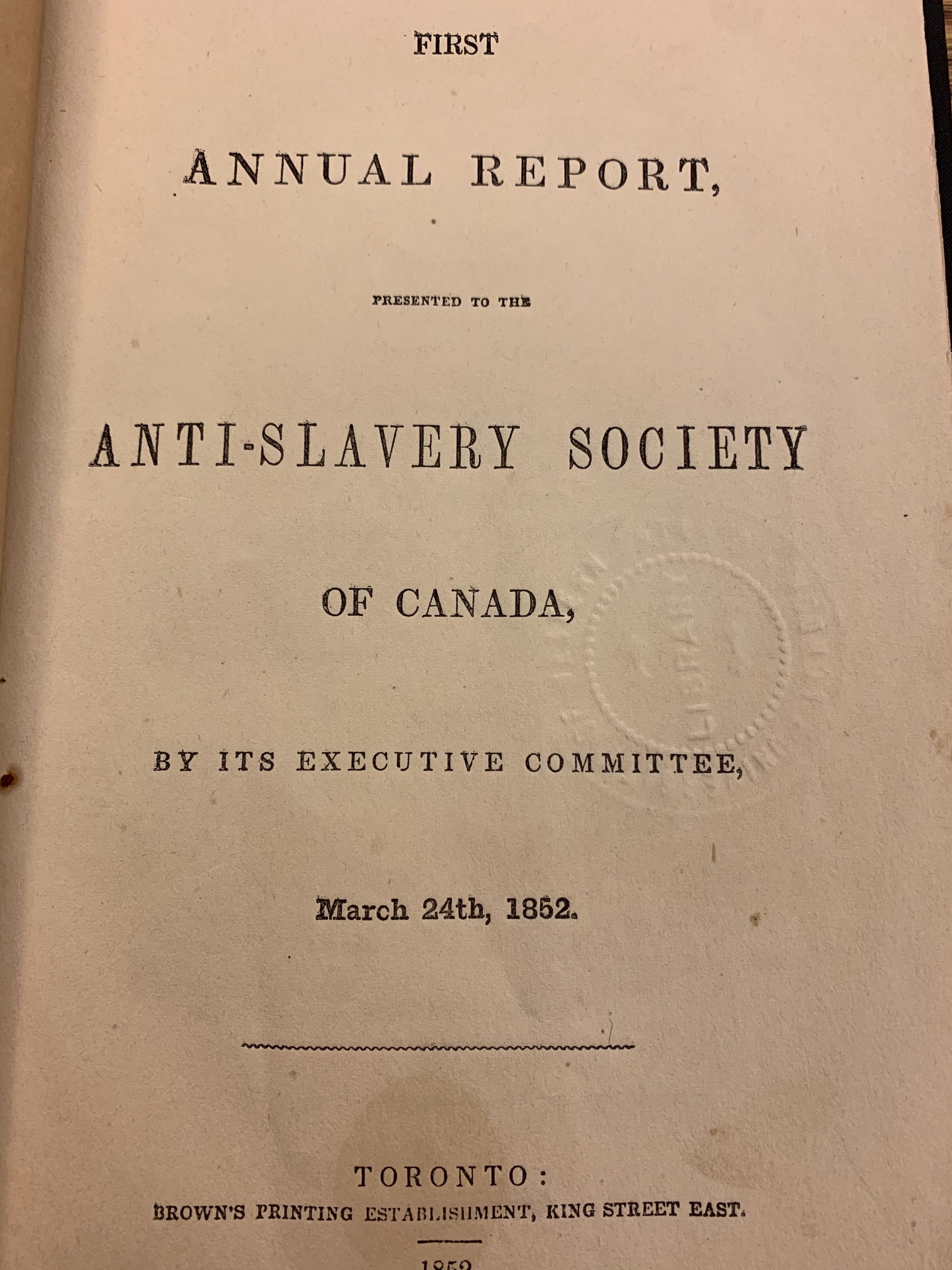 A list of rules and resolutions adopted by the Anti-Slavery Society of Canada, outlined in their annual report 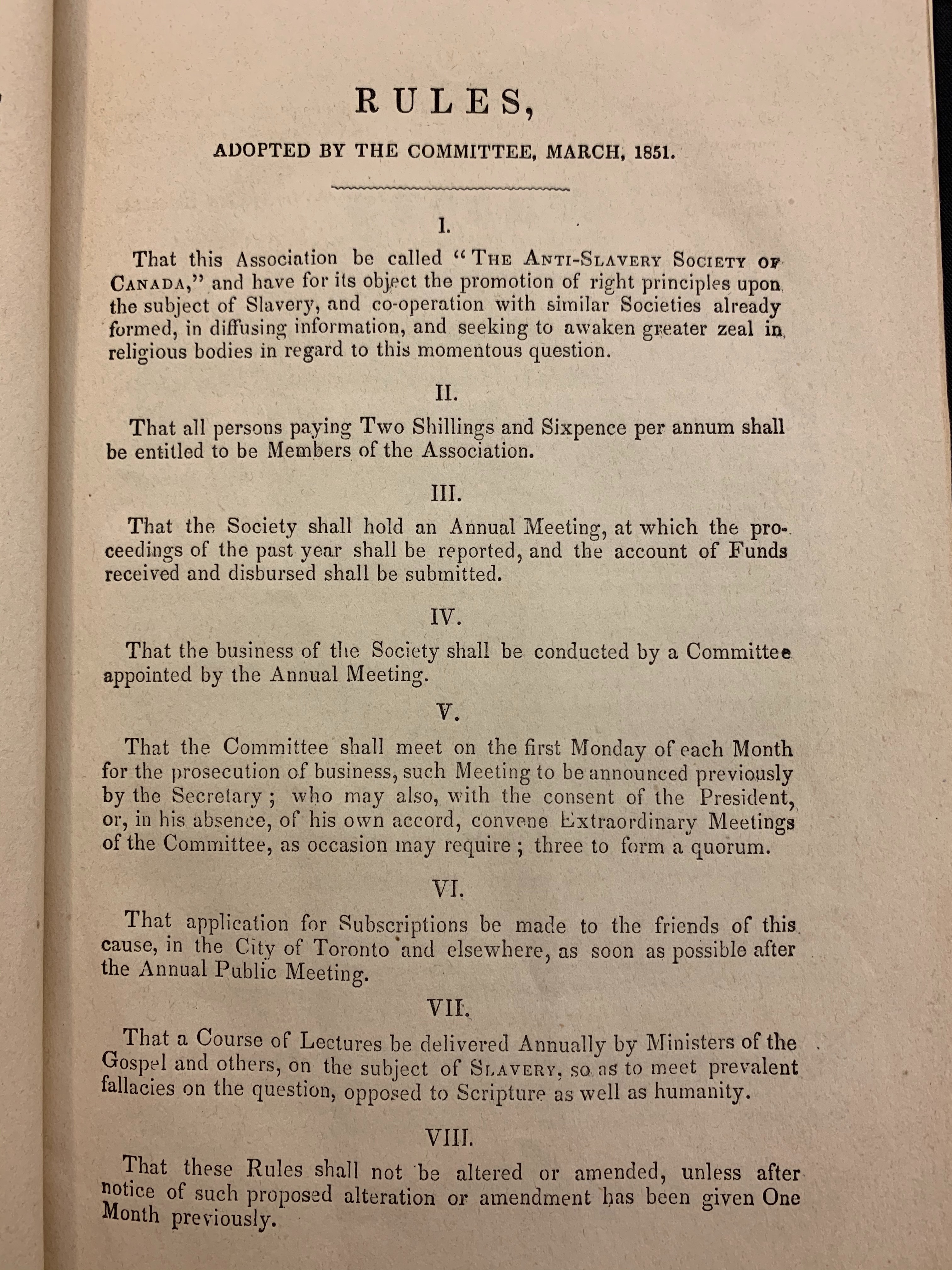 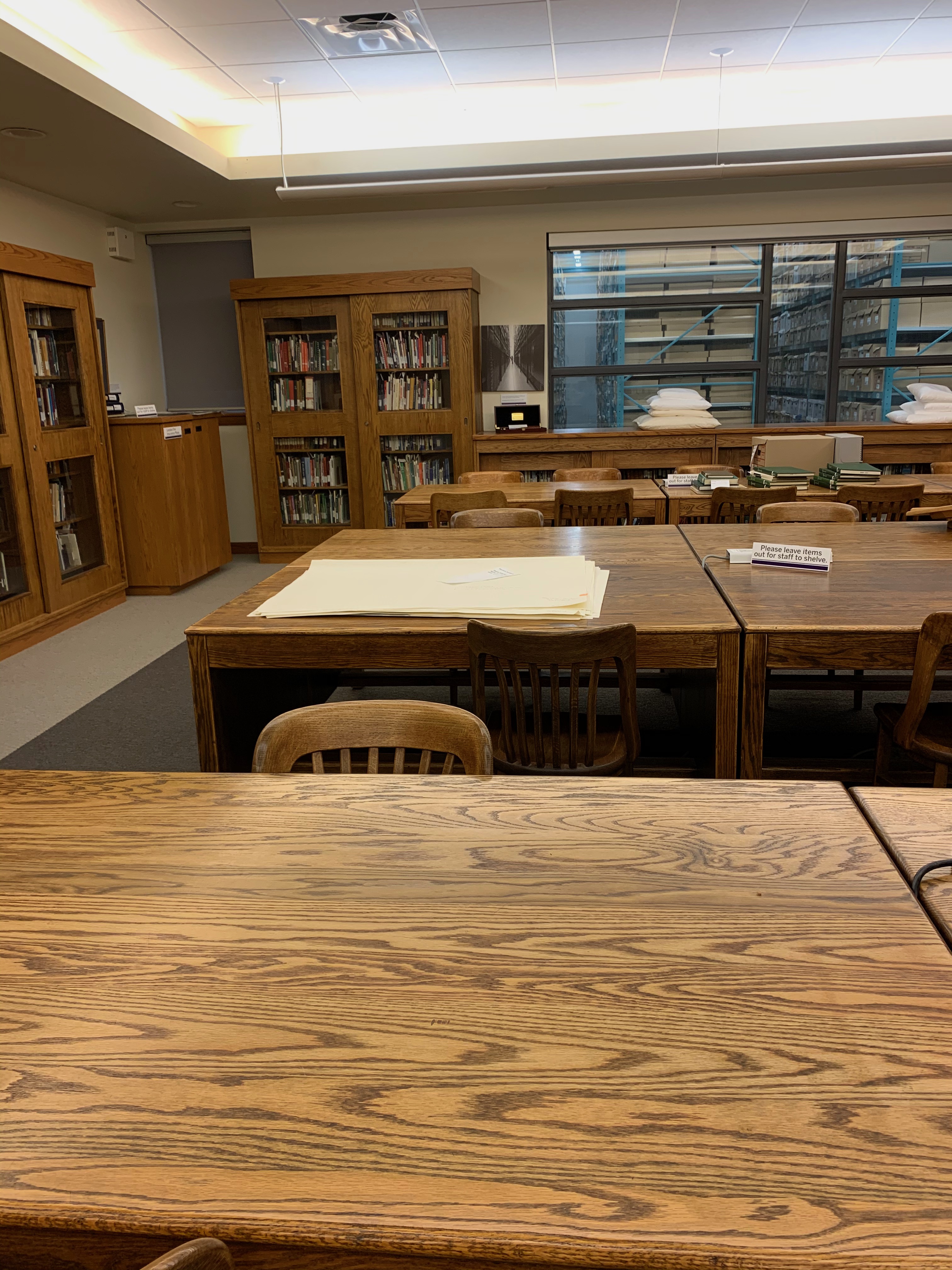 Downstairs in the ARCC where all the material is stored and pulled up from. 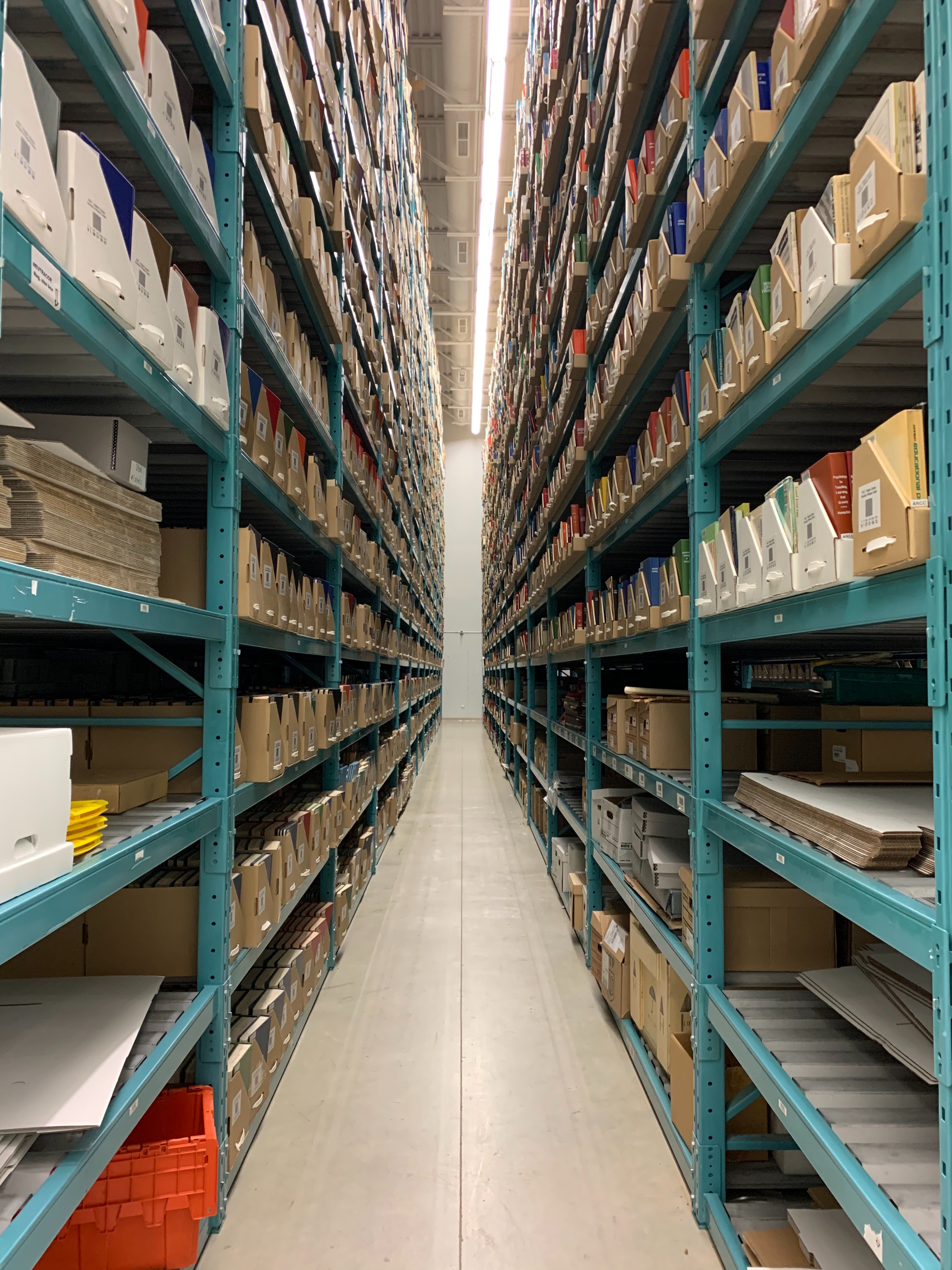 Some of the rare books in the ARCC's collection. 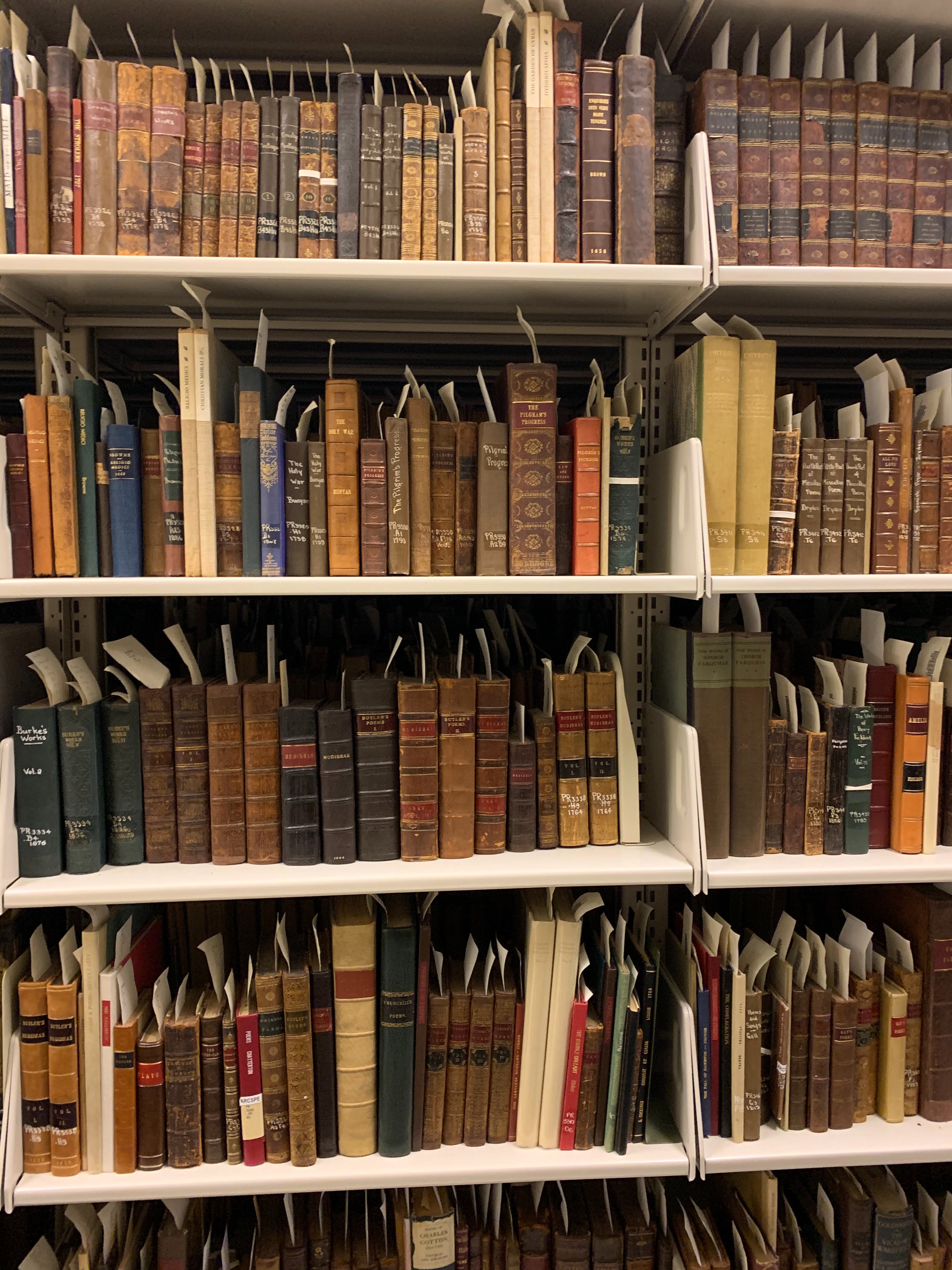 "The Two Altars" is a story by Harriet Beecher Stowe, included in "Autographs for Freedom." 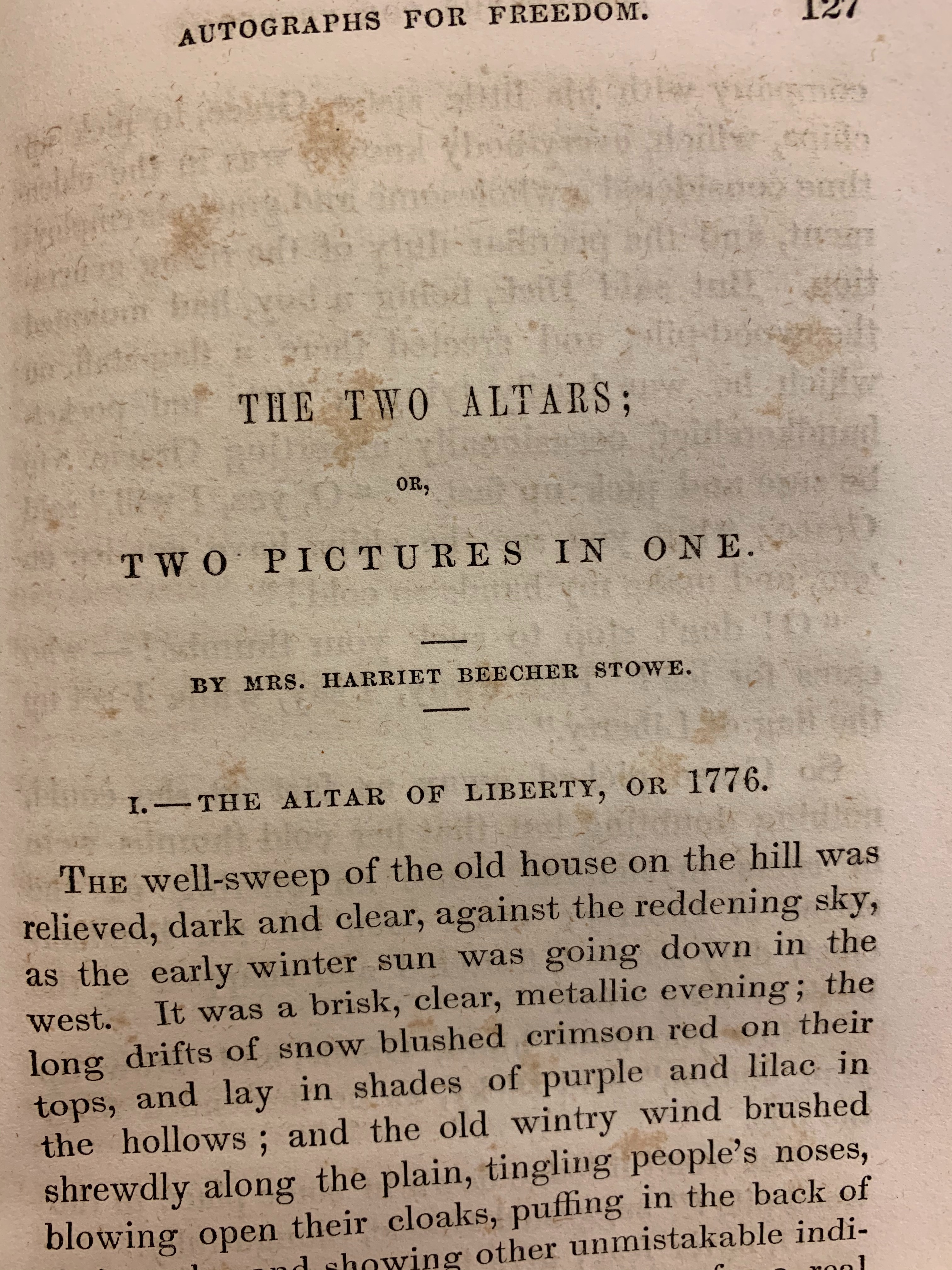 Abolition of slavery in the United States was one of the major social movements in the 19th century. Numerous individuals relentlessly called upon their peers to band together and confront an unjust institution. They were bound to abolition because it promoted racial superiority and ran contrary to the fundamental ideals outlined in the constitution. There were multiple anti-slavery societies throughout the U.S. and Canada, each of them committed to a cause they believed to be plaguing society.  These groups made speeches and organized rallies in protest of the continuing institution. All these societies united on the general agreement that the institution of slavery was immoral and could no longer continue to exist in a continent that espoused liberty for all.

Although abolitionist narratives have mainly focused on efforts within the United States, Canadians also rallied for the destruction of slavery. There is a tendency within the scholarship on Black Canadian history to focus on the Underground Railroad and hailing Canada as a haven for fugitive slaves. However, there was a considerable amount of protesting going on within Canada. Moreover, racism and prejudice were a reality in Canada despite the growing number of Black community settlements. Canada was not the perfect land of freedom that history has depicted it as. As a result, there were many Canadian based abolitionist groups. In addition, there was an increase in the spread of anti-slavery literature after Lieutenant-Governor John Graves Simcoe passed an act to gradually prevent the growth of slavery in 1793. While the act did not free any slaves, it did prevent further admittance of any more slaves into Canada.Those who were slaves would remain slaves until their death and children born after the 1793 would gain their freedom at the age of 25. Although a gradual decline of slavery was seen in Canada, the bill remained unpopular among slaveholders and racism thrived. Prejudice lingered well through the 1850s and the Separate Schools Act was introduced in 1850. A Canadian abolition movement grew out of these discriminatory sentiments and took much inspiration from American anti-slavery societies.

Women were also especially significant in abolition movements. Caught in a period where many women were restricted from engaging publicly in social affairs, women used the issue of slavery to move outside of the private sphere. Women challenged traditional gender roles and argued that their femininity was a tool that could benefit, rather than hinder, their fight against slavery. Women protested, spread pamphlets, delivered speeches and collected hundreds of signatures from others who supported abolition. Moreover, many women in American slave societies organized fairs to attract attention and generate discussion on the reality of slavery. During these fairs, women could provoke critical discussion and recruit new members for their societies.This mobilization showcases a united commitment to abolition and the destruction of prescribed gender roles. The public involvement of women in in a larger human rights issue was pivotal to their own freedom. Women like Angelina E. Grimke, Harriet Beecher Stowe, and Laura S. Haviland were all strong supporters of abolition.

The ARCC has a number of anti-slavery pamphlets and records of annual reports from numerous anti-slavery societies. This includes reports from both the Anti-Slavery Society of Canada and the American Anti-Slavery Society. These records outline their personal platforms and the necessary steps to gathering public support for abolition.  Each of these annual reports describes the group’s rules and resolutions. The American Anti-Slavery Society committed themselves to raising public awareness of slavery and alleviating the condition of their peers held in subjugation.They vowed to encourage the education of African Americans and general cultivation of their minds. These reports indicate the desires of each group and also highlights the intricate communication networks between auxiliary groups. Regular correspondence was maintained between groups in Canada, the U.S. and Britain in an intercontinental struggle against slavery.

In addition, there is a copy of an anthology titled Autographs for Freedom with a preface by Julia Griffiths, another woman actively engaged in abolition during this period. Autographs is a collection of different letters or written work by various prominent figures who supported abolition. Each of the letters within the comprehensive anthology promotes national reform and identifies slavery as the most important subject of the century. It includes a fictional story written by Harriet Beecher Stowe titled The Two Altars. Stowe wrote this story as a response to the institution of slavery and contrasts the life of a revolutionary soldiers’ family with that of a free Black man. Despite the nation’s promise of liberty, the Black man is still trapped in a country of slaves and subsequently jailed. Consisting of work by both men and women, Autographs demonstrates a nationwide commitment to anti-slavery rhetoric.

The ARCC also has many personal accounts of women specifically involved in abolitionist efforts. Women encouraged others to take an active role in social reform and many rose to prominence during this period. These sentiments are reflected in Slavery in America: An Appeal to the Christian Women of the Slave States of America by Angelina E. Grimke. Grimke called on her fellow Christian women to take advantage of their religious character and fight against an institution with no possible justification. Grimke encouraged women to educate themselves, pray for those condemned to slavery, and speak out to others. Grimke believed they were strong and could withstand much ridicule or possible persecution in the fight for abolition.Although some women thought they could do little to fight slavery, Grimke and others aroused women to assume their duties to challenge slavery. Laura S. Haviland recounts her lifetime commitment to abolition in an overview of her participation in Civil War and Underground Railroad in her own work. Her personal biography, A Woman’s Life Work, is also available in the ARCC. Other resources within the ARCC include the works of Mary Ann Shadd Carey and Harriet Beecher Stowe, two women who also ardently protested slavery in North America. These narratives integrate women’s stories into the period of abolitionist reform and considers the impact of their personal efforts.

The ARCC’s repository of rare anti-slavery books and documents are significant resources for students or others interested in the abolitionist movement in North America. Each of their sources offers an opportunity for a detailed historical analysis and insight into the social climate during the 19th century. The ARCC is a valuable institution of public history that is easily accessible to Western students and the general public. The physical conditions of the books are also valuable as there has been a great effort to preserve the history within the pages. Many of these books have been maintained for decades and they are still important tools in considering the specific efforts of individuals or groups.

Specifically considering the collection of anti-slavery material written by women, the archival material preserves the active role of women in abolition efforts and their personal connection to movement. Constantly relegated to the private sphere, the written work of these women indicates their desire to break free of traditional constraints while also addressing a pressing human rights issue. More generally, the archival material is useful for expanding public knowledge on the anti-slavery movement and the types of individuals involved. The abundance of materials in the ARCC should inspire others to do their own research and enrich their personal knowledge on the history of abolitionist movements. Acknowledging these primary sources leads to a more complete narrative of a movement that redefined North American identity and racial history.

Grimke, Angelina Emily. Thompson , George . Slavery in America: A Reprint of an Appeal to the Christian Women of the Slave States of America . Edinburgh . Oliphant and Son , 1837.

Reid-Maroney, Nina, Handel Kashope Wright, and Boulou Ebanda de B'beri. The Promised Land: History and Historiography of the Black Experience in Chatham-Kent's settlement and Beyond. Toronto , ON . University of Toronto Press , 2014.