On June 18, 1720, Lieutenant-Governor Don Pedro de Villasur set out from the Palace of the Governors in New Mexico to enforce Spanish power on the Great Plains. Villasur was dispatched with forty soldiers, a number of Spanish settlers and explorers, sixty Pueblo auxillaries, and some Apache scouts to engage with the Pawnee nation. It went spectacularly poorly. After a brief battle, the expedition was all but destroyed. Villasur's superior, Governor Antonio de Valverde Cosio spent several years afterward defending his decision to deploy Villasur; Valverde quite possibly had a hand in the creation of the Segesser hide paintings to display his version of events, and to lionize Villasur. 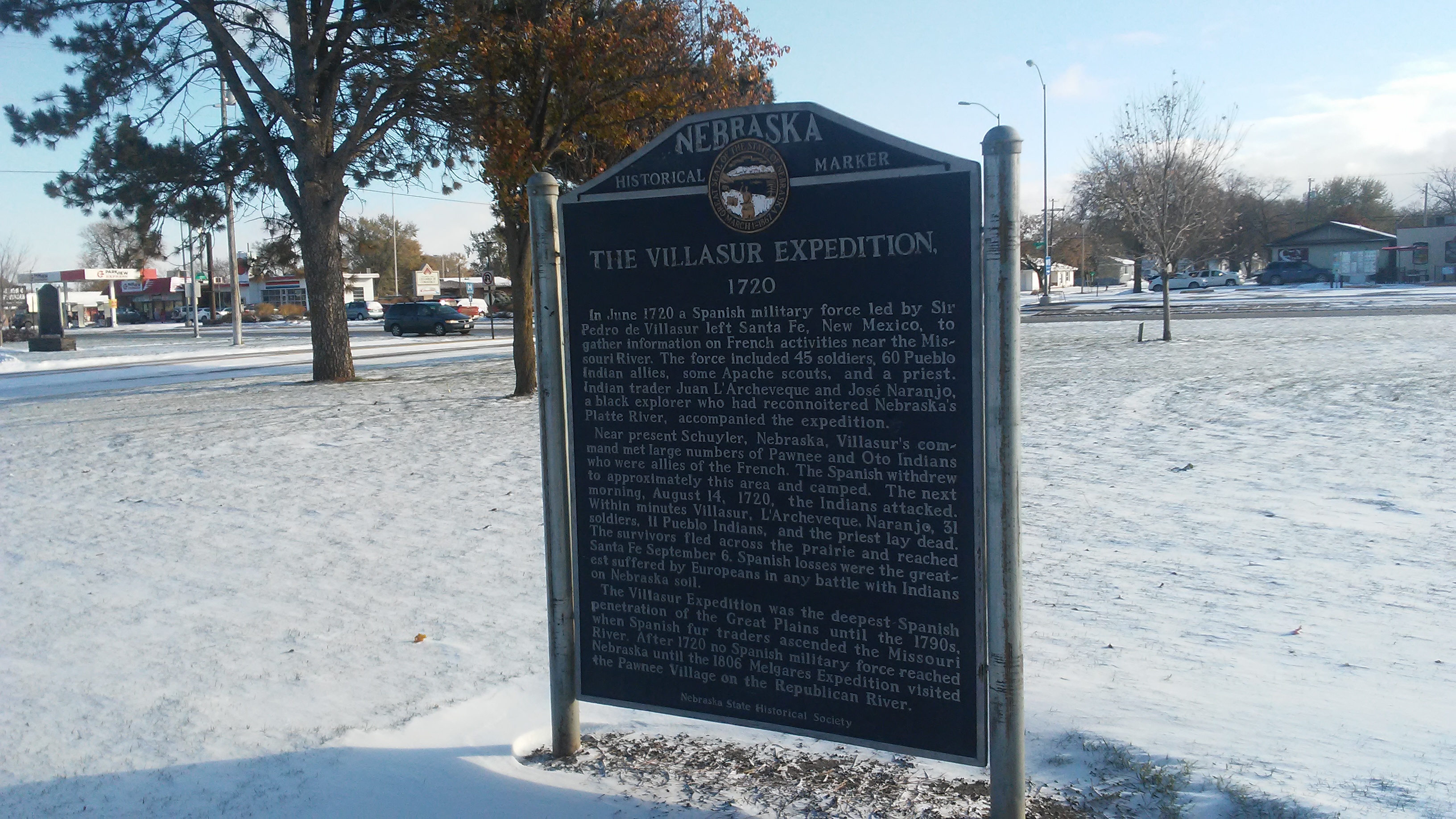 detail of the Segesser II painting 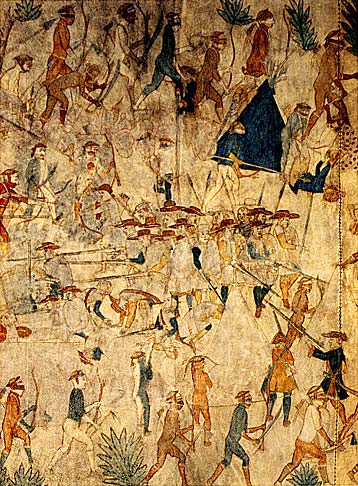 Digital Copy of Jacques Chiquet North America Map, courtesy of Micah I. Evans. This map dates from the same year of the Villasur expedition, and demonstrates European knowledge of native nations. The extent of Spanish claims are shown. 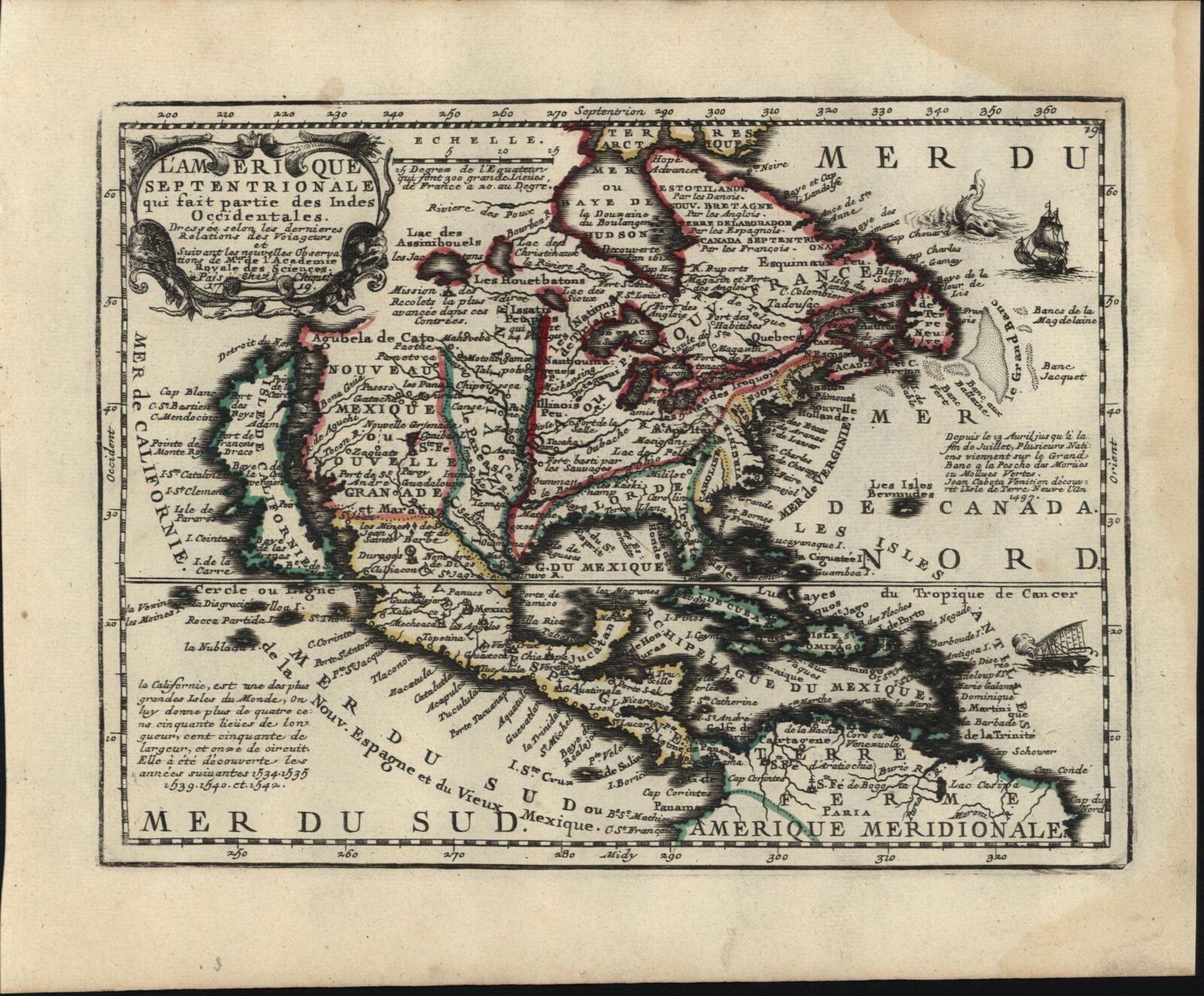 Digital Copy of Herman Moll Map of New France, courtesy of Micah I. Evans. This English language map of New France is based on the Crozat Patent issued in Septemper 1712. While the rivers are roughly placed and disappear into "Parts Unknown", the Panis, or Pawnee, are shown. The presumed Pawnee villages visited by Villasur match those near present-day Columbus Nebraska. 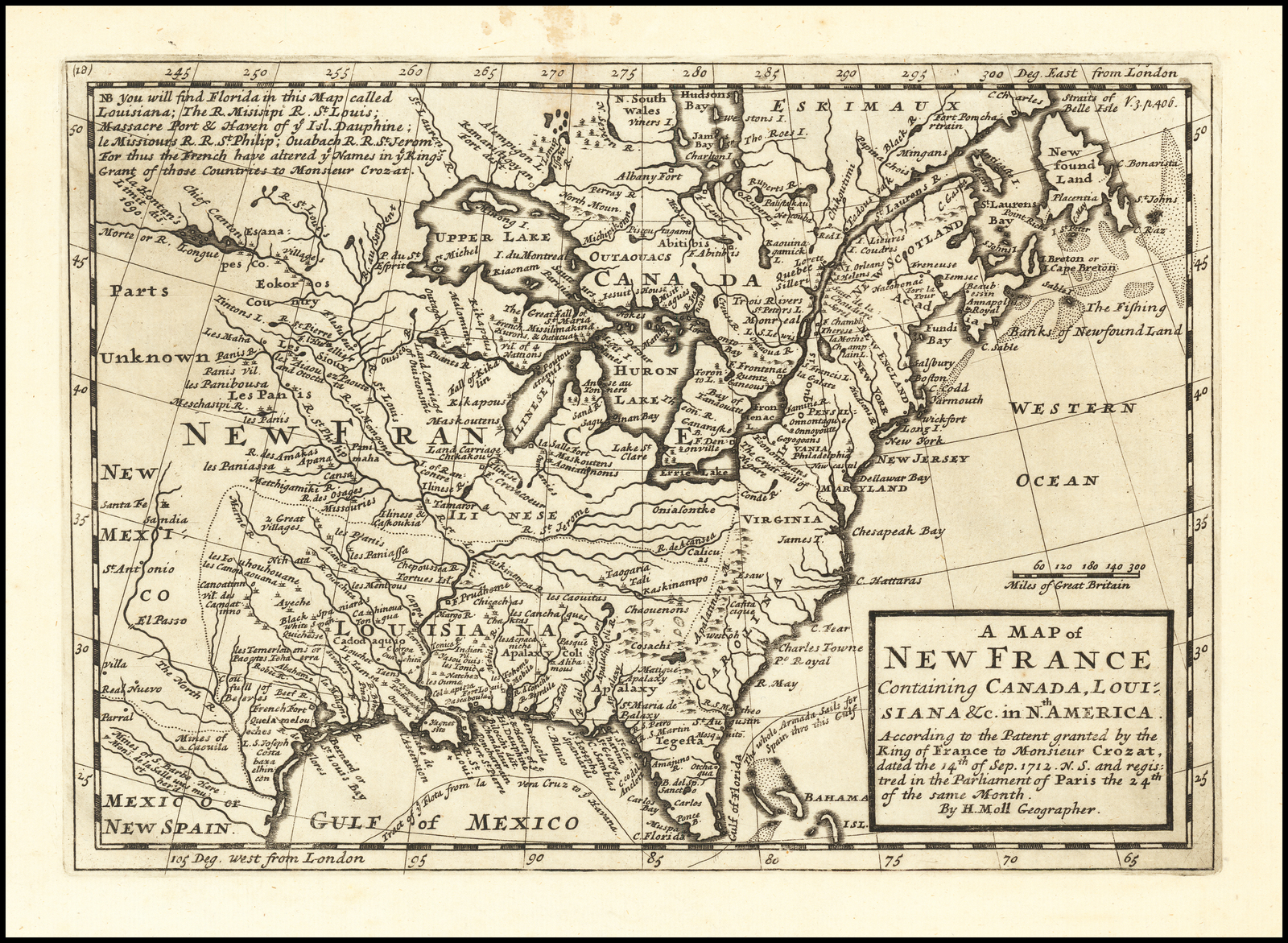 In 1720, the Pawnee nation was among the most populous native nations in the Great Plains, in part due to their relative isolation from direct contact with Europeans. They were not however isolated from European trade. They formed a central hub to a wide spanning network connecting northern nations to Spanish horses, and southern and western nations to French firearms. Some French traders had penetrated the interior of the continent, and established friendly relations on behalf of their parent company, Compagnie des Indes, and the French crown. The Pawnee's semi-sedentary way of life allowed a robust trade in firearms, horses, and other luxury goods. They also were the primary source of slaves in the Great Plains slave trade.

The Pawnee had been fighting a major, long term war with the Apache that had both religious and existential dimensions. Villasur sought out the agents of the French and the enemies of their newfound Apache allies, leading the way with Francisco Sistaca, an enslaved Pawnee serving as both a scout and interpreter. The Pawnee chose to free their man and to punish their enemies. The Spanish unknowingly rode into a proxy war they were ill-equipped to fight, and according to Valverde, with the architect of their doom leading them.

Villasur was an inexperienced commander, sent farther afield than any before him with a smaller war party than one might expect for a mission to root out the French. The mission was more of reconnaissance and diplomacy than for bringing battle to the French and their suspected allies. The Apache of the southern plains had recently sought the assistance of the Spanish in fighting the Pawnee for prime woodlands, and Villasur's superior Valverde reluctantly agreed to dispatch him. The Spanish probably sought to cut off French trade, pacify the plains with diplomatic overtures and trade connections, and possibly to demonstrate force with cavalry and firearms as they had nearer to home in New Mexico. They did not anticipate deep-seated hatred between their new friends the Apache and the Pawnee. Nor did they expect to face withering fire from muskets, or the clever tactics of the Pawnee. Villasur brought with him between forty and forty-five Spanish soldiers, a significant portion of the soldiery of New Mexico.

Jean L'Archeveque was a French expatriate and explorer who accompanied the expedition. He had defected years previously, and settled under the Spanish crown in North America. Valverde assigned him to ascertain if Frenchmen were present among the Pawnee, and to be an interpreter to those ends. Fluency and literacy in French may not have aided him in this task much, however, as the average French explorer-trader could not read any letters written by L'Archeveque.

The renowned warrior, scout, and commander, Alcade Jose Naranjo assisted Villasur. Naranjo was of mixed African and Pueblo heritage. He commanded respect with his fearsome reputation and intellect, having learned Spanish, Apache, his native tongue Pueblo. Naranjo rose to become the chief scout and commander of native auxiliaries for the province of New Mexico. His talent for languages, military exploits, and experience on previous expeditions made him a natural choice to lead the approximately sixty Pueblo and Apache warriors and scouts who bolstered the small body of Spanish troops.

Padre Juan Minguez attended to the flock. He likely was tasked with converting and ministering to the native nations they encountered. Whatever his role, he followed the footsteps of countless chaplains before him, accompanying soldiers into battle, ready to give the fallen their last rights.

Francisco Sistaca was a Pawnee man, captured some time in the past during a slave raid by the Apache and sold into slavery in New Mexico. His slaveholder was Don Christophe de la Serne, a settler who also journeyed with Villasur. Sistaca was one of a great number of Pawnee who had been subject to the ravages of the slave trade. So many Pawnee had been enslaved in European colonies, the French word for indigenous slave was "Panis." Sistaca was not one to submit entirely to his condition. He would ultimately play a major role in the destruction of the Villasur expedition and live free among his people.

After a nine-hundred-mile-long journey across mountains, deserts, the forested western skirts of the plains, rivers and following the migration trail of their would-be hosts, Villasur and his column of soldiers, settlers, scouts, auxiliaries, and slaves reached the river they called Jesus Maria. Commonly believed to be the Platte River, this presented not only an obstacle to travel, but the main water source of the Pawnee. After crossing the Platte, Villasur pushed scouts out to find the villages of the Pawnee. Apaches and Pueblos under Naranjo and Sistaca went searching for occupied towns. Many towns were unoccupied during hunting seasons, and it would be difficult to impossible to find the bands while hunting. The first villages they found were empty. As luck would have it, good or ill, they found a band either returning from the hunt, or in their villages. The Pawnee pointed to the sun, and indicated there was not enough time left in the day for the customary diplomatic ceremony.

According to Valverde, this band indicated they had a European staying among them. L'Archeveque set to work writing a letter in French hoping for a response. None decipherable by him arrived. Sistaca, the enslaved Pawnee, acted as the courier; and another messager returned with the unreadable note and a white linen flag. This may have been interpreted as proof of a Frenchman's presence, as it was either a symbol of Bourbon power or a European symbol of parley. Just as likely, Sistaca was using his knowledge of the Spanish against them, now that he had returned to his homeland. Francisco Sistaca would never return to bondage. After two days of waiting, Villasur began to suspect they were in danger. The expedition withdrew approximately ten miles from the villages, and set up a pair of camps near the confluence of the Loup and Platte rivers. The Spanish and Pueblo encamped separately.

On the morning of August 13, 1720, the encamped soldiers waited through dawn on guard. Even at such an early date, Europeans had become accustomed to dawn and dusk raids, and employed something similar to "Stand To" to prevent ambush. When a unit of men "Stand To", all members are awake and alert prior to dawn until after sunrise, and the same at dusk. The common method of attack on the Great Plains was to use the sun's low position for concealment when moving into an attack, or to cover a withdraw. Dawn came and went, no such attack came. The company loosed the horses to allow them to forage.

It is hard to guess what went through Villasur's brain before a musket ball did. Perhaps he was anxious that their Pawnee slave had not returned, or that friendly relations could not be made with Sistaca's people. Perhaps he was ready to return to his home in New Mexico. He, or one of his commanders ordered the horses gathered, and camp broke. Regardless of his thoughts on the matter, a volley of arrows and musket fire devastated the Spanish camp.

Valverde accused Sistaca of perfidy for alerting the Pawnee of Spanish defensive practices in his letters to his superiors. He may have been right. He was ultimately wrong in accusing the French when he claimed two hundred French regulars fired upon the erstwhile expedition. The Pawnee possessed sufficient muskets to destroy Villasur's expedition. Several of the men catching horses were able to break through into the camp and rescue their compatriots. The attacks continued through the morning, a survivor recounted three more repulsed by the Spanish. The Pawnee did not leave the Pueblo and Apache unscathed. Naranjo led many of the auxillaries in a desperate rescue attempt. Finally, on grass slick with blood, fourteen Spaniards escaped along with forty-nine of the Pueblo. The Spanish rode for El Cuartelejo. The corpses left on side of the Platte included Villasur, L'Archeveque, Naranjo, and the priest Minguez. All told, the battle claimed the lives of thirty or so Spaniards, eleven Pueblo, and an unknown number of Pawnee.

The Pawnee had repulsed an incursion from a foreign power, Spain, that their enemies, the Apache encouraged. Spain had failed to detect a French presence in the territory they claimed, and lost a fifth of New Mexico's military power. Spain did not return to the area for over eighty years. Governor Valverde of New Mexico spent seven years defending his and his late lieutenant governor's actions in court. During this period, Valverde's version of events as he presented them to his masters formed the basis of the Segesser II painting, a painting in European battle narrative style on Buffalo hides. The painter or painters may have been survivors of the battle, as they made many of the figures within identifiable. What they did not represent accurately was the presence of Frenchmen. None of the eyewitnesses identified any French soldiers on the bloody day of August 13, 1720.

Herman Moll, A Map of New France, circa 1730s, Micah I. Evans Collection on loan to the Criss Library Archives and Special Collections, University of Nebraska at Omaha, Omaha, Nebraska.

Created by Robert Montag (Instructed by Sharon Wood, University of Nebraska at Omaha) on November 25th 2019, 1:01:00 am.