The Unspoken Voice in the Voice of the Fugitive

Voice of the Fugitive (1851-1852) is Canada’s first Black-run abolitionist newspaper, published in Sandwich, Ontario in 1851, and Windsor, Ontario in 1852. In its first issue on 1 January 1851, the paper’s purpose is clearly stated: to “advocate the cause of human liberty in the true meaning of that term…the immediate and unconditional abolition of chattel slavery every where, but especially on American soil.” The Voice also advocated for emigration to Canada, Christian morality, and support for the Temperance Movement. The paper’s creators, Henry and Mary Bibb, emigrated to Canada once the Fugitive Slave Law was passed in the United States. While Henry is generally credited as the sole creator, there is substantial evidence that Mary E. Bibb was the paper’s main editor. Unlike Henry Bibb who was a self-emancipated slave, Mary Bibb was born free and received an excellent education. The articles where Mary likely had the most influence were when Henry traveled in 1851. Mary Bibb used the paper’s activism to advocate for and support other gender driven movements like temperance and education reform.

This article celebrates Black women’s ability to become doctors. It combines stigmas about race and gender, and shows how the Voice specifically emphasized the importance of education for both Black people and women. 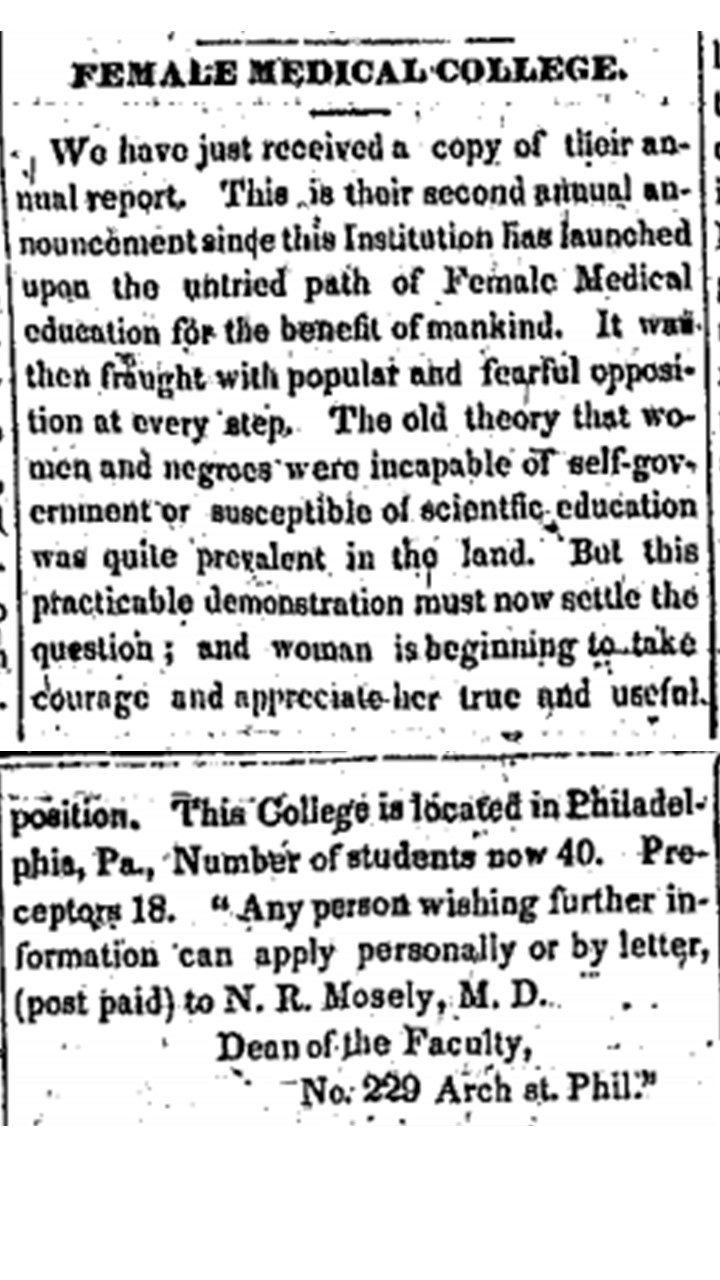 In addition to supporting education and careers for women, The Voice upheld traditional gender norms and advocated for women in the home. The article demonstrates the Voice’s moderate interpretation of women’s rights. 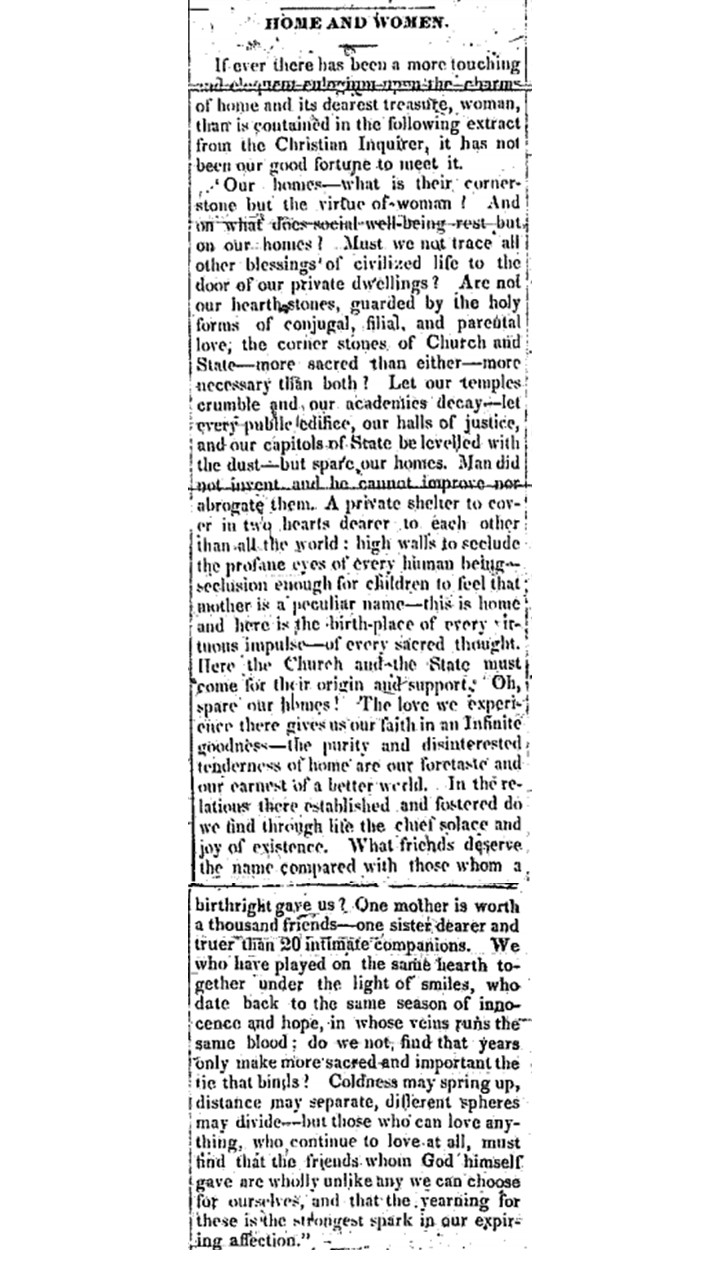 This is the Detroit river, with Detroit on the left and Windsor on the right. The Bibbs migrated from Detroit to Sandwich, and eventually settled in Windsor. The image demonstrates that while they migrated to a new country, the areas were very close. 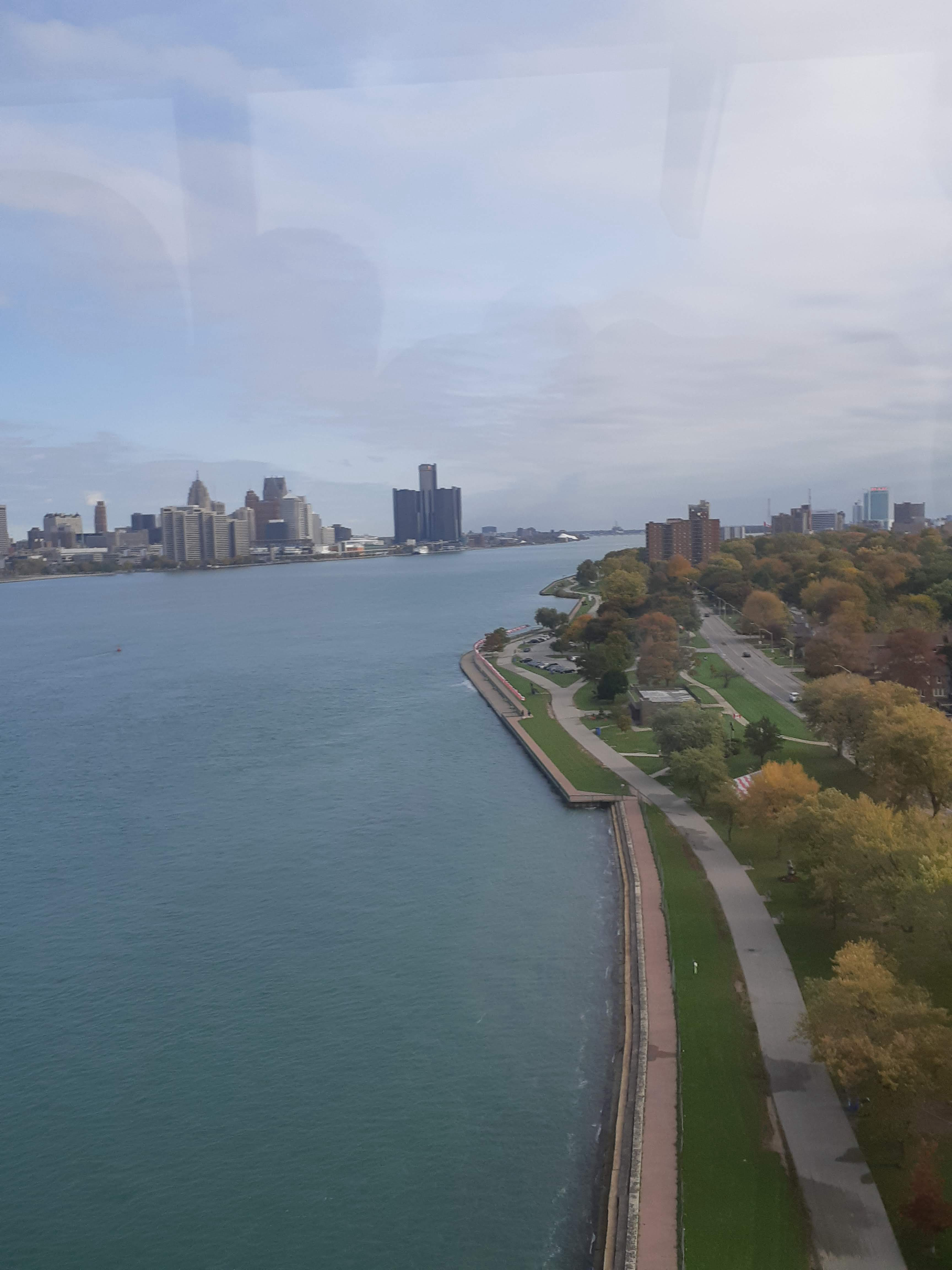 This is the Ambassador Bridge, connecting Winsor to Detroit. The image represents how the Voice had correspondents in both countries. The paper influenced a transnational activism, uniting abolitionists across borders. 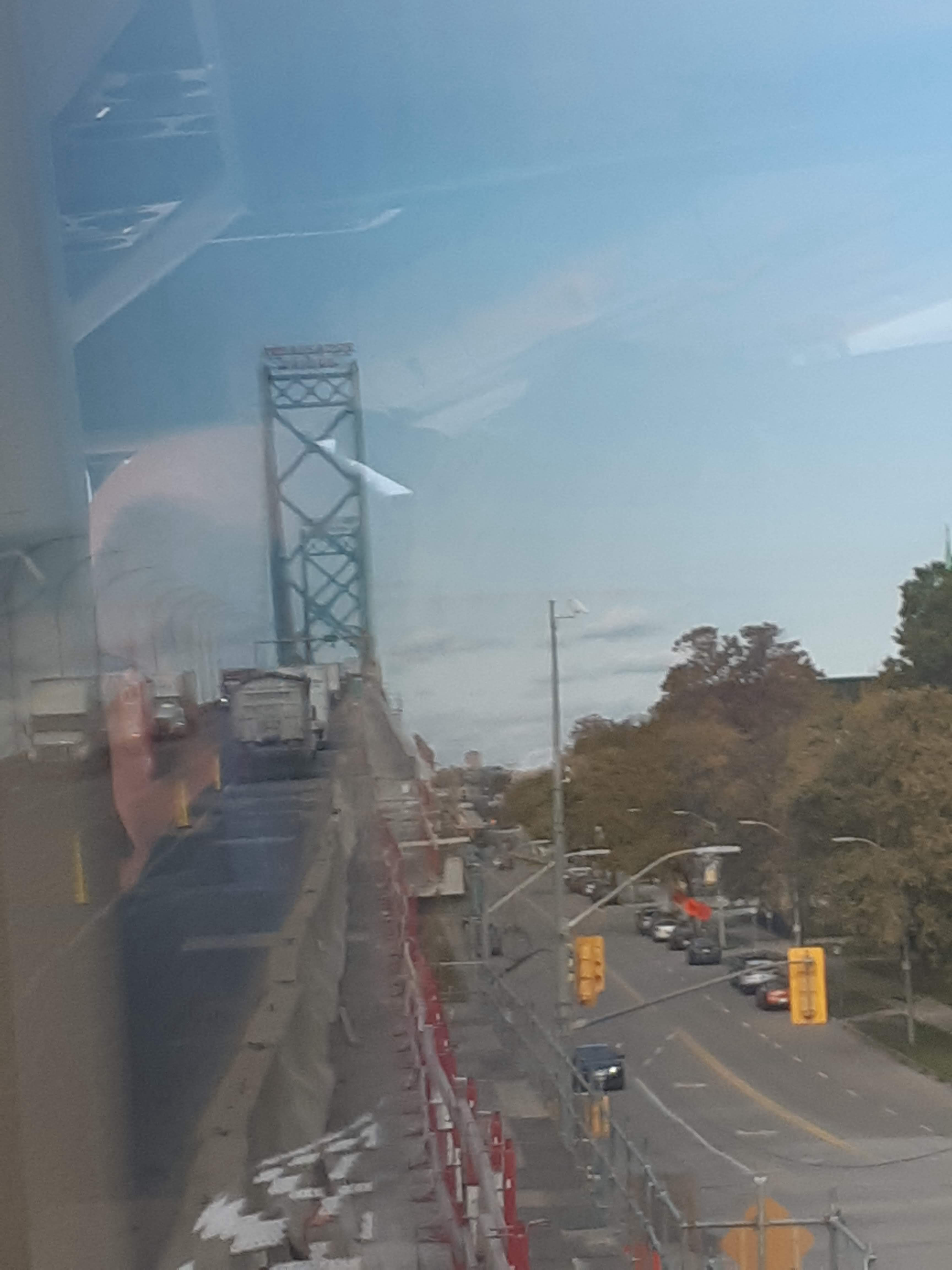 This is an image of Henry Bibb, which is significant, because there are no photos of Mary. It is another way Mary had not been remembered, so I reclaim this photo with a link to her Wikipedia article: https://en.wikipedia.org/wiki/Mary_E._Bibb. 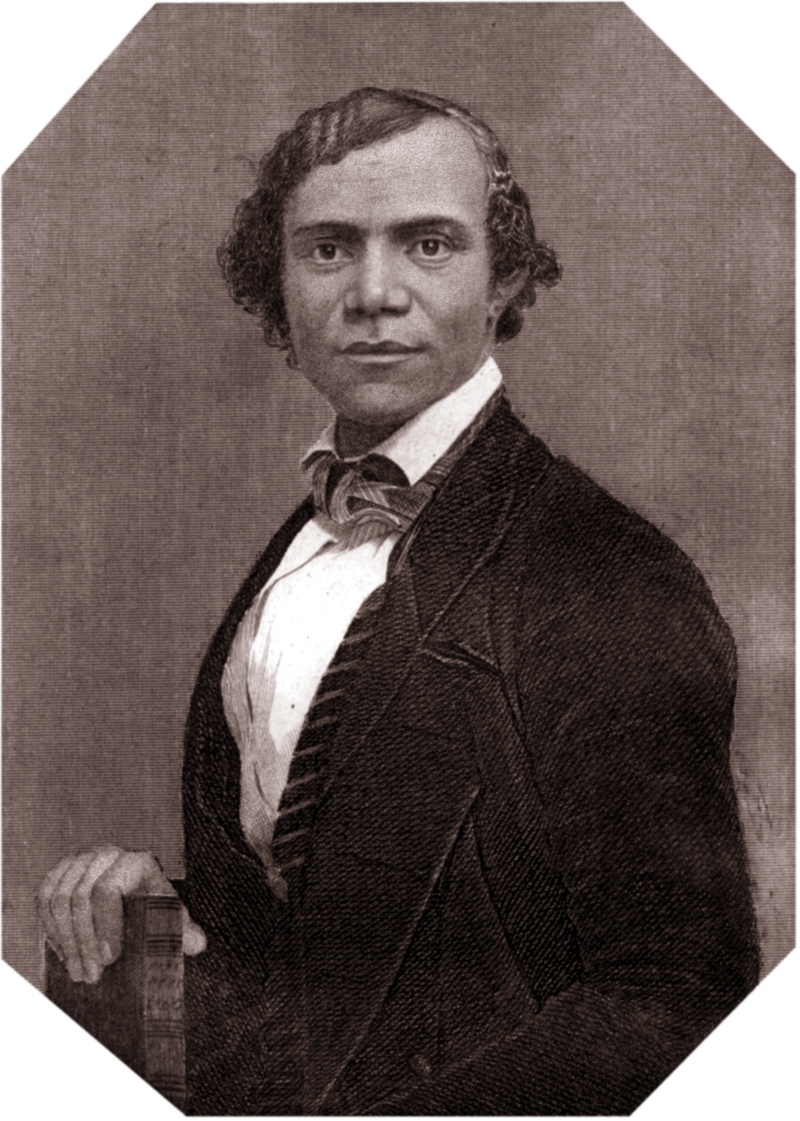 The Voice of the Fugitive was a crucial tool for Black activism’s 19th century history, providing important information which fugitives and abolitionists used to organize their protests and movements.[1] There is also a significant, yet far less studied, gender history of the paper, seen through Mary E. Bibb. Exploring the intersections between female and Black activist ideologies reveals the complexities within female activism with which Mary Bibb had to contend. Mary’s husband Henry Bibb argued that, to be accepted, African Canadians should strive for whiteness. Mary Bibb supported a less direct role for female activism in part because she was influenced by the Voice and Henry’s ideology for Black activism. Rather than actively voicing concerns about women’s lack of rights, she maintained that women should stay in line with gender norms and be activists through other movements like temperance or education reform.

The Voice supported a distinct form of Black activism that influenced the kind of female activism in which Mary Bibb participated. The Voice advocated for “racial elevation,” which argued that Black people should strive for middle-class white standards of living.[2] Supporters of racial elevation argued that the only way for white people to accept Black people is if Black people separated themselves from their stereotypes as much as possible.[3] This influenced Black women’s gender experience, because Black men wanted women to be both involved in activism and appear “ladylike,” supporting their husbands rather than leading movements themselves.[4] This more unknown ideological framework shaped Mary Bibb’s participation in female activism.

The role of women in 1850s African Canadian communities was complicated and reflected this more conservative form of Black activism. Black men generally wanted their wives to adhere with respectable and ‘proper’ femininity.[5] This idea of ‘true’ womanhood put strain on women trying to be active members of small Black communities.[6] Conversely, gender roles were also more flexible in these communities, because economic constraints made it acceptable for women to be in the public sphere.[7] Racial elevation’s ideology has strong ties to this complicated female experience. While women should support and participate in activism, they should do so while striving to maintain ‘proper’ femininity. Mary reflects this complex female experience: she worked as a teacher and challenged racism in the Canada West school system,[8] but also maintained a strict adherence to ‘proper’ femininity and ‘true’ womanhood.

The Voice clearly supports this more restrained role for women activists. There are several articles dedicated to women’s rights conventions, but the articles are updates about the movement rather than supporting direct involvement. An article titled “Women’s Rights Convention” describes a Worchester Massachusetts convention, applauding the women for “breaking the arm of the oppressor,” but the article is very short, and only provided a brief summary of the event rather than creating or advertising an event of their own.[9] Conversely, there were many articles describing the Temperance Movement and how the paper and its female subscribers were involved in its success.[10] The kind of female activism supported most by the Voice are movements like temperance, not women’s rights, revealing the paper’s ideology for female activism. This gender ideology stems from the racial elevation ideology which drove the Voice’s Black activism.

The Voice of the Fugitive’s less radical ideology, influenced by both racial elevation and complicated experiences of femininity, is crucial for understanding the complexity of female activism. A very different approach to female activism was advocated by well-known activist Mary Ann Shadd. Shadd was more radical, constantly challenging gender norms, while Bibb was more moderate, working within traditional gender norms and through her husband.[11] Unlike Shadd, Mary Bibb and the Voice advocated for traditional gender norms of ‘proper’ femininity. A Voice article titled “Golden Rule for Brides” states that the “implicit submission in a wife to the just will of her husband, is what she promised at the altar.”[12] While less radical than Shadd, historians argue that Bibb should also be remembered as a feminist, saying that the Voice was a big influence on Shadd’s later newspaper.[13] Bibb and the Voice may have advocated for a more moderate form of female activism, but it was still activism. Bibb fought relentlessly for Black education reform and temperance. Regardless of how radical the activism was, the Voice, and Mary Bibb as an uncredited editor, are significant for understanding a more moderate form of female activism, and the conflict between different ideologies for how women should participate. As Canada’s first Black newspaper, it holds a distinct legacy for its work with Black activism, female activism, and their intersections.

Bibb, Mary E. and Henry Bibb. Voice of the Fugitive. The Black Press in 19th Century Canada and Beyond Database.