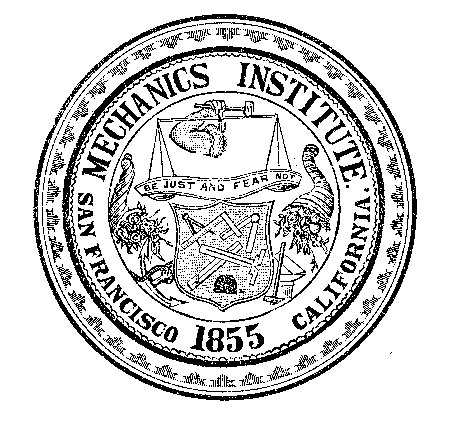 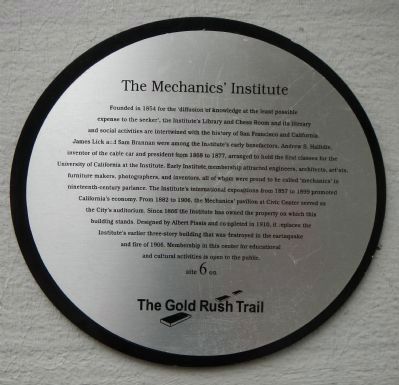 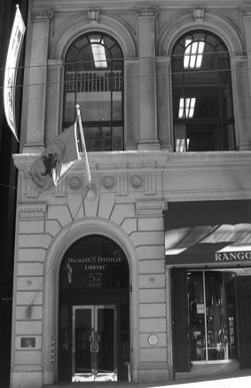 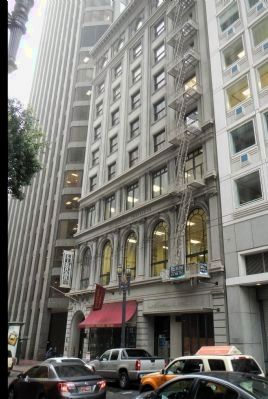 The Mechanics' Institute was founded in downtown San Francisco in 1854 to provide technical and vocational education to out-of-work miners following the California Gold Rush of 1849. By 1854, the Gold Rush was essentially finished, and 70 percent of San Francisco's population found themselves unemployed. The Mechanics' Institute was founded by a group of builders, artisans, businessmen, and philanthropists in two rented rooms on the fourth floor of the Express Building. It was located in the center the city as a place where miners and others could expand their knowledge, learn new skills, and create new industries to boost San Francisco's economy. As stated in its motto, the institute was established for "the diffusion of knowledge at the least possible expense to the seeker."

Mechanics' Institutes originally began forming in Scotland during the industrial revolution to provide technical education to those who were unable to obtain a university education. At its height, the Mechanics' Institute had seven hundred open branches in England alone. The innovative concept spread to the United States, and by the mid-nineteenth century, the Mechanics' Institute in San Francisco was offering "hands on" technical education, plus lectures in science, arts, and humanities. It also offered social and recreational opportunities (a chess club), as well as a library. According to the Mechanics' Institute, the library began with only a few books and scientific specimens on display, including a selection of California minerals, a piece of petrified Pine, an eagle's leg, and "a claw of monstrous size." However, the library has since grown to over 170,000 volumes on subjects ranging from finance to science to arts and humanities.

When the Mechanics' Institute opened in San Francisco, it drew skilled workers from a variety of professions who at the time were grouped together under the term "mechanics." These professions included builders, engineers, architects, inventors, photographers, machinists, artisans, carpenters and craftsmen (such as cabinet and furniture makers), as well as other business owners who worked with their hands. The Mechanics' Institute became known for its literary and social activities, especially its chess club, which has been active since the institute was founded as a way to promote camaraderie among its members. From its founding, the institute has been open to all members regardless of race, class, or gender. Although women did not traditionally work as mechanics during the early decades of the institute, many women did join to use the institute's library and attend events.

From its founding, the institute hosted public lectures, which were widely attended. Lectures were originally held at the Musical Hall (the largest venue in the city). The inaugural lecture was given in November 1855 on the subject of the Dignity of Labor. In 1866, the institute was able to purchase its own building on Post Street, at the site of the institute's current location. In addition to featuring a large library, the Post Street building also housed a chess room, a ladies' sitting room, an auditorium which could hold up to 600 people, and several other rooms available for rent or use by cultural and scientific organizations.

From 1857 - 1899, the institute held an international exposition, which greatly contributed to the growth of California's economy. The first classes of the University of California were also held at the institute, which provided assistance with the curriculum. In 1906, the original three-story building was destroyed by the fires that engulfed San Francisco following the Great Earthquake. The building was subsequently rebuilt by the architect Albert Pissis as a nine-story, steel-framed building with a classical facade. Completed in 1910, it features an impressive circular iron staircase and huge interior columns. Over the years, writers such as Jack London and Gertrude Stein have visited the institute's library, as well as local entrepreneurs such as Domingo Ghirardelli and Levi Strauss, and the naturalist John Muir.

The Mechanics' Institute in San Francisco is now open to the public for educational and cultural activities. It hosts book clubs, philosophy clubs, writing groups, author events, and film screenings, among other activities. It continues to hold classes and offer public lectures on a wide variety of subjects. The chess club remains active and the chess room has been visited by many world-class chess players. Today, the Mechanics' Institute in San Francisco is experiencing something of a renaissance, with nearly 5,000 active members.