Fairview Cemetery has been an active burial site since 1846. It is the final resting place for so many throughout the entire history of Council Bluffs, Iowa. From its inception during the Mormon pilgrimage to the West, this cemetery holds the burial sites of settlers, war heroes, traders, political figures, and activists. It is a stunning location with a large memorial to commemorate Civil War veterans. This cemetery is also within a three-minute walk to two other historical sites, Ruth Anne Dodge's Black Angel and the Lincoln Memorial. 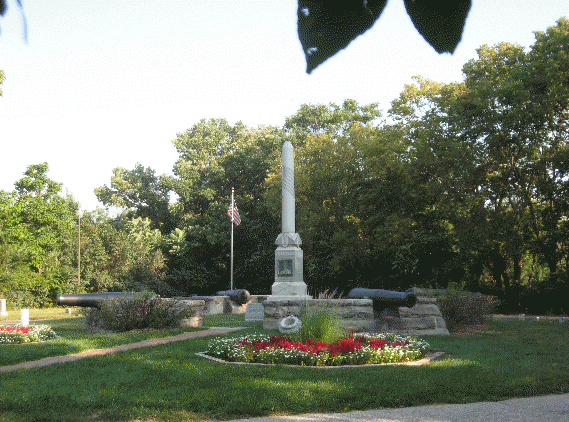 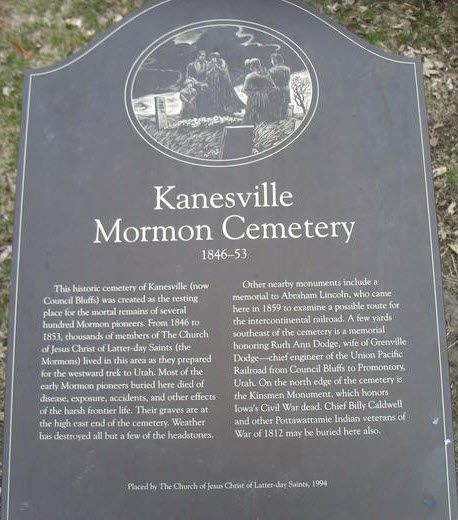 Old and Undated Photograph of the Kinsman Civil War Monument. Shows a ball at the top of the monument that is not there today. 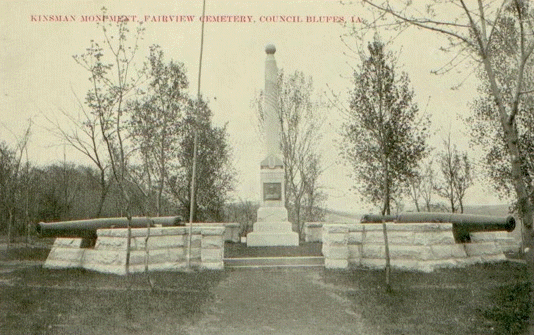 If you are visiting friends or family in Council Bluffs, you will almost certainly find them driving you to Fairview Cemetery. Found in one of the oldest sections of town, it is a beautiful cemetery with two other historic attractions less than a block away. Fairview Cemetery was officially created in 1846 by the Fairview Cemetery Association. This cemetery is rich with history from the stories of pioneers laid to rest here and the easily seen progression of headstones throughout the 1800s and 1900s.

This cemetery is filled with people who have lived in this area. Before 1832, Council Bluffs was a fur trading post with the name Hart’s Bluffs. In 1838, Jesuit missionaries established an outpost, which they abandoned in 1839. There was a military party present from 1842 to 1843 to help protect the local Pottawattamie Indians from the Sioux Indians.[i] In 1846 to 1848 the LDS community was residing on the west side of the Missouri river at what can be considered Omaha, Nebraska. After Brigham Young visited and saw that people were sick and dying, he recommended they go to the healthier area on the east side of the river. So, the LDS members who could not go westward relocated to Miller’s Hollow which eventually became known as Kanesville. For seven years the Mormon community lived and worked and died in this area and they buried their dead in Fairview Cemetery.[ii]

Each of these people would have likely buried their dead in the graveyard on top of the bluff. Some of these gravestones we can still read today, while many others have been chiseled away by the weather and elements over the years. An inscription from a pioneer family on an ancient grave reads:

Here Lonely and sad in this wilderness land,

Sweet, sweet be thy rest ‘til thy Savior’s command

In beauty and youth shall restore thee.[iii]

One of the first white settlers to western Iowa was Francis Guittar, who was buried in Fairview Cemetery in 1896. He settled in present day Council Bluffs in 1827, then called Trader’s Point, to work the trading post that was already established there. Many local Indian tribes would come to him to trade animal furs for general goods and ammunition. Over the twenty years he was in Trader’s Point he cultivated a friendship with the Pawnee Indians. He was eventually given the title of War Chief by the tribe and even led them into a battle against the Sioux, near present day Fremont. After the Mormon population moved into the area, Guittar opened a store in their town of Kanesville, which is now Council Bluffs.[iv]

Another notable person who is buried in Fairview Cemetery is Amelia Bloomer. She was a women’s suffragist and a strict supporter of the temperance movement. She had a very long and full life before moving to Council Bluffs. She became the first woman to own, edit, and publish a newspaper. It was called The Lily and was centered around women’s rights and temperance. She wrote several times about women wearing short skirts (still below the knee) with Turkish trousers matching underneath. However, the style was worn and observed by another person in her town of Seneca Falls, NY, Mrs. Elizabeth Smith Miller. Because Bloomer had published articles about it, the press dubbed the costume bloomers, even though she attempted to give full credit to Mrs. Miller throughout her life. Bloomer and her husband relocated to Council Bluffs in 1855. Here she lived for over thirty years, watching the town grow, and sharing her beliefs on temperance and women’s rights. On Christmas day of 1884 she took her last trip out of her home to eat the holiday dinner at General N. P. Dodge’s home. Five days later she died and was then buried in Fairview Cemetery.[v]

In addition to hundreds of people buried here, each with their own story, there is a special monument placed here for the Mormon community that lived and died in this area in the 1840s. According to the monument, several hundred Mormon pioneers died from their harsh frontier life and were buried in the east end of this cemetery.[vi] Another large monument is the Kinsman Civil War Monument. It is in remembrance of Colonel William H. Kinsman. He led a vanguard attack in 1863 against Confederate troops and died. His remains were eventually buried in Fairview along with other members veterans of the era.[vii]

The Black Angel statue is by far the most recognized monument at Fairview. While it does not reside inside the gated grounds it is immediately next to the entrance. This statue was erected in remembrance of General Grenville Dodge’s wife, Ruth Anne Dodge. There are local stories that go back three or four generation that have given this statue a spooky twist and frequently is put on lists for haunted attractions for the area. One story, told by a Council Bluffs local goes as follows:

“Ruth Ann Dodge woke up from a terrible dream one morning. She had been becalmed on a ship in the middle of an ocean when a terrible angel appeared on the bow of the ship. Extending a basin of water towards Ruth, the angel said, “Drink from my water and you will have eternal life.” Knowing that the angel was surely lying, Ruth refused her and awoke. She told her husband that morning, telling him that she was scared to meet the angel in her dreams again that night. Ruth woke up the following morning to fearfully tell her husband she had the same dream. She spent all day reflecting on the dream and before bed told her husband that if the angel comes to her again this night, she will accept the water. Ruth Ann Dodge died in her sleep on the third night, for the angel had come and Ruth had drunk from her basin of death.”[viii]

The angel was sculpted by the same man who created the Lincoln Memorial in Washington D.C. and the Minuteman in Concord, Massachusetts, Daniel Chester French.[ix]

This cemetery is not only a beautiful location in the city of Council Bluffs, but it is full of fascinating memorials and thousands of buried Americans. Take a trip up to Fairview, enjoy the view from the Lincoln memorial a block away, look into the mysterious eyes of Ruth Anne Dodge’s Black Angel, take a stroll through Fairview itself and experience the one hundred and seventy years of history around you. Each of the people laid to rest here have a story to be told and passed on to a younger generation.

[iv] Gue, Benjamin F, History of Iowa From the Earliest Times to the Beginning of the Twentieth Century, (New York, The Century History Company, 1903), 113.

Gue, Benjamin F, History of Iowa From the Earliest Times to the Beginning of the Twentieth Century, (New York, The Century History Company, 1903), 113.