Duchesne Academy of the Sacred Heart has been an educational institution in Omaha since 1881. Duchesne was founded by members of the Religious of the Sacred Heart order of nuns. Over the course of its history, Duchesne has educated students from preschool through college. It is currently a high school for girls with an enrollment of about 330 students. Duchesne also has a preschool for both girls and boys. Duchesne is part of a network of schools across the country and the world. The network has 24 schools in the United States and Canada, and over 150 schools in 41 countries worldwide. These schools range from preschool through high school. Most schools are single gender (female), but several are co-ed. 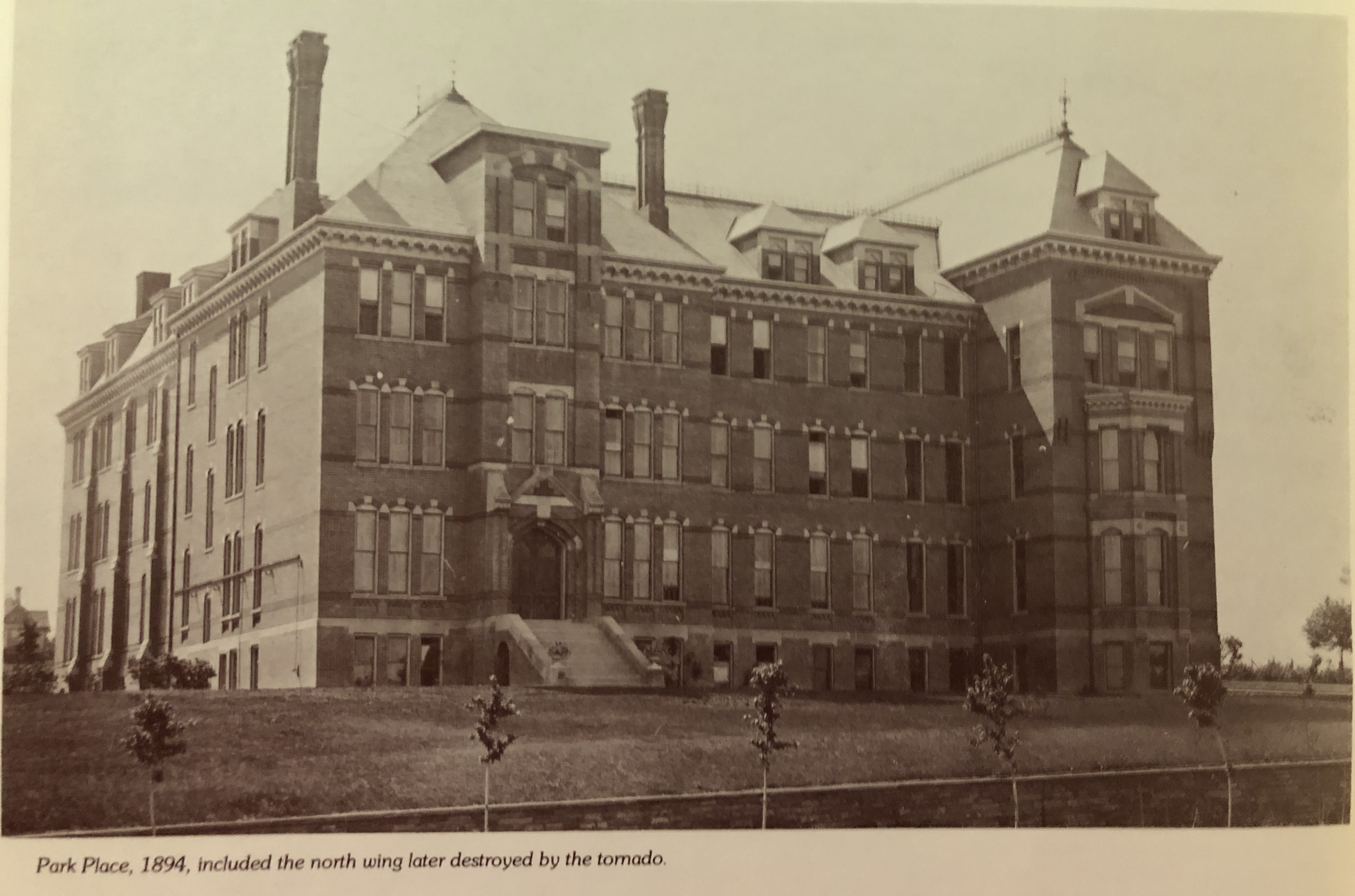 Sr. Catherine Henry checking out the plans on the building of the dormitory 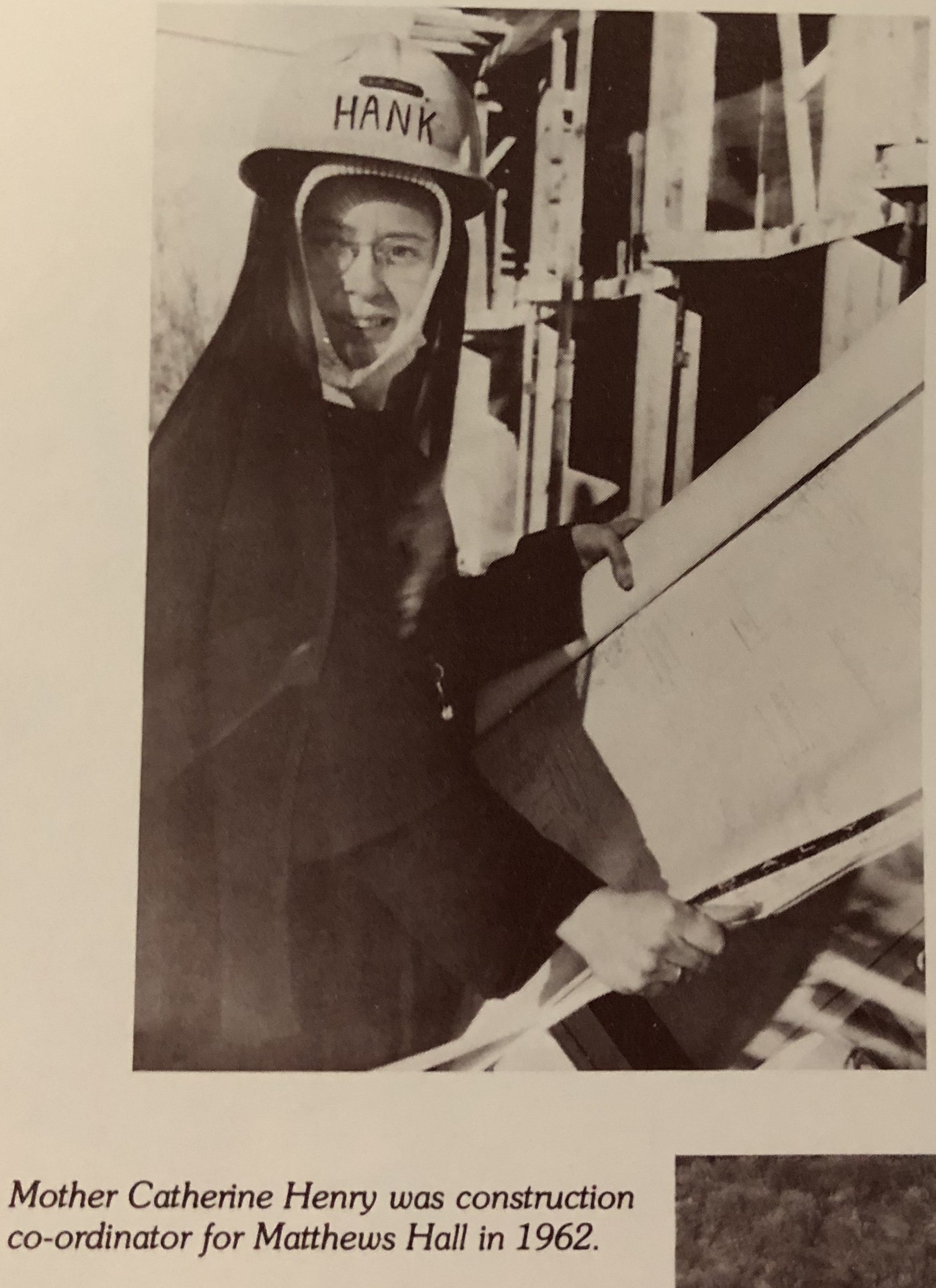 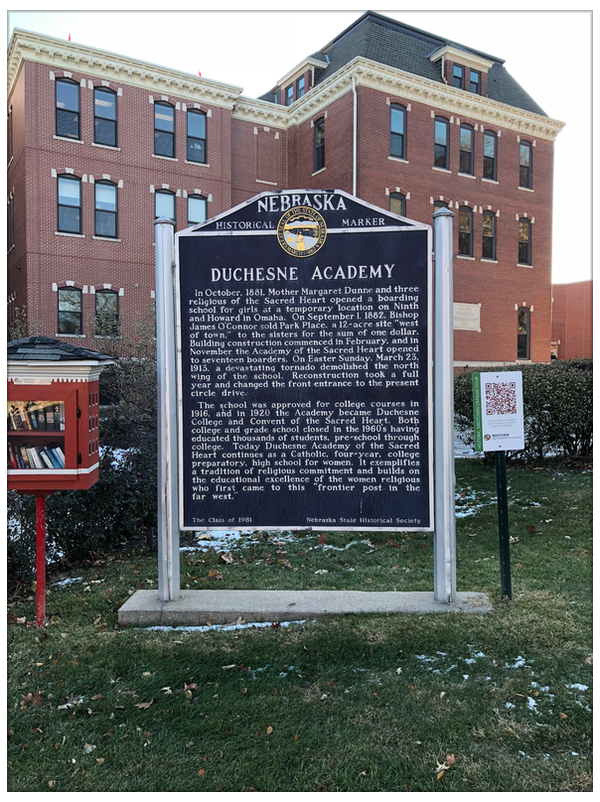 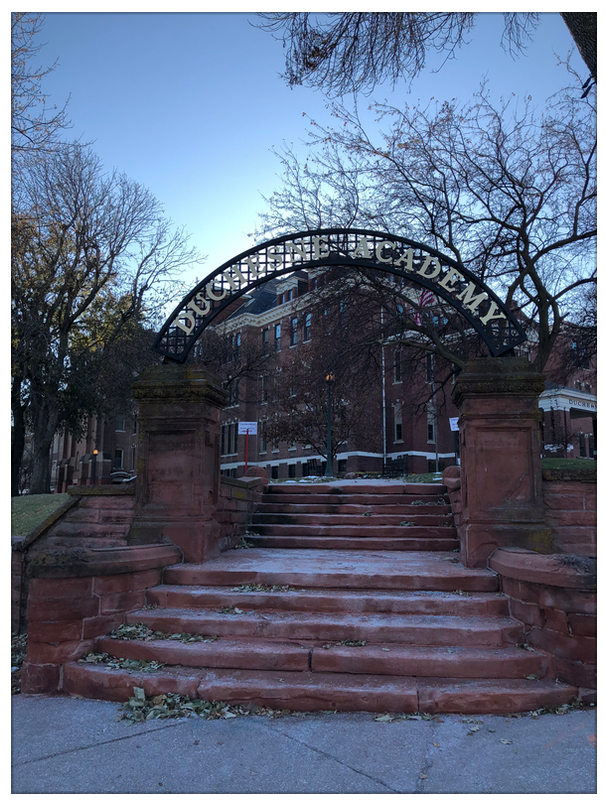 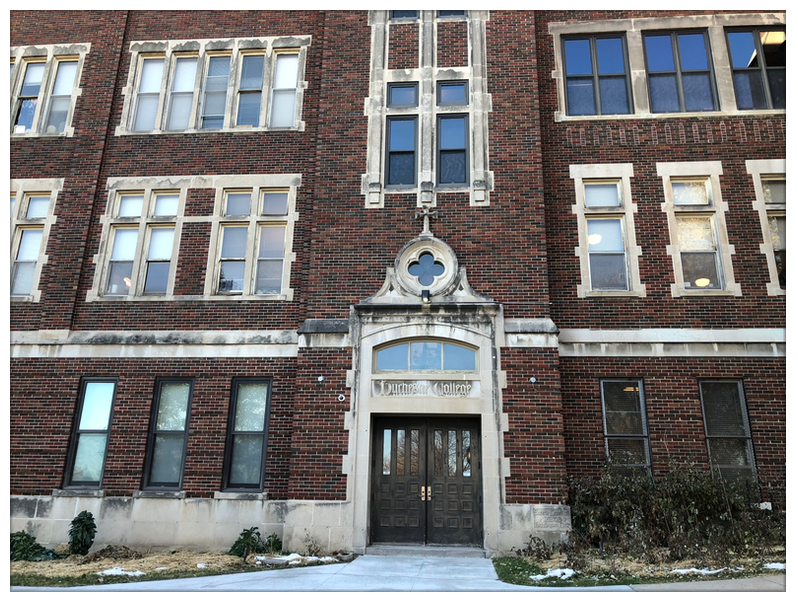 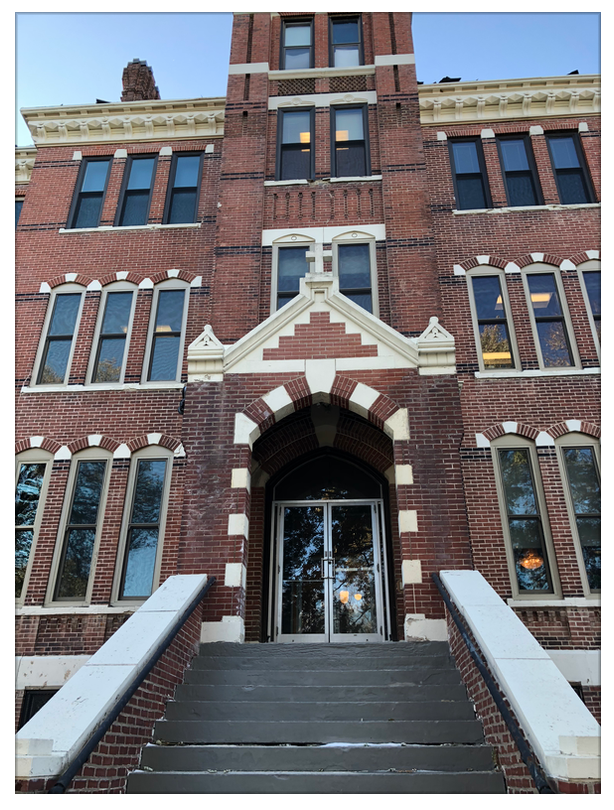 One of the 3rd floor old dormitory rooms 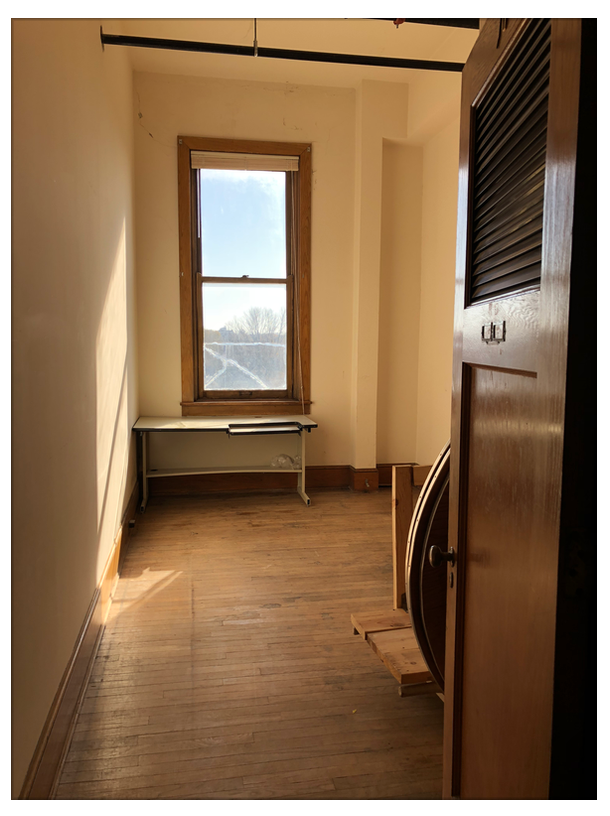 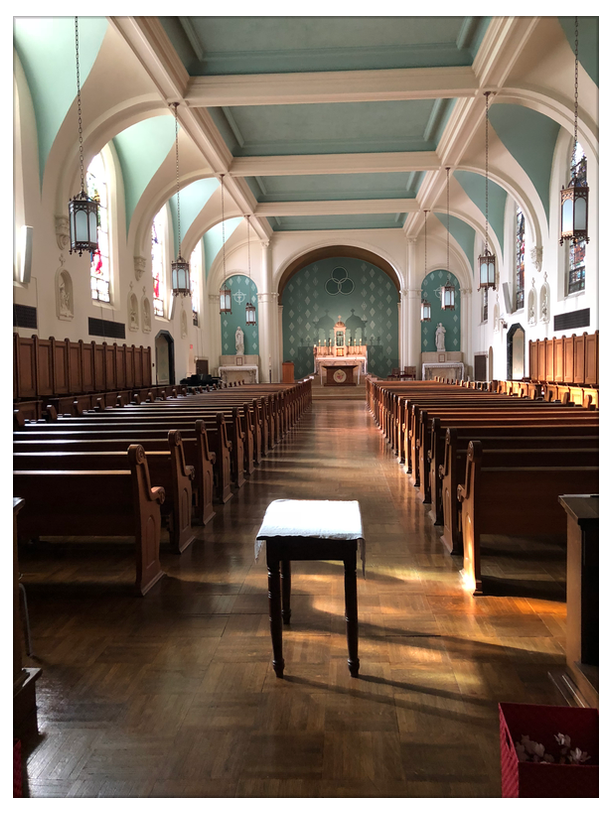 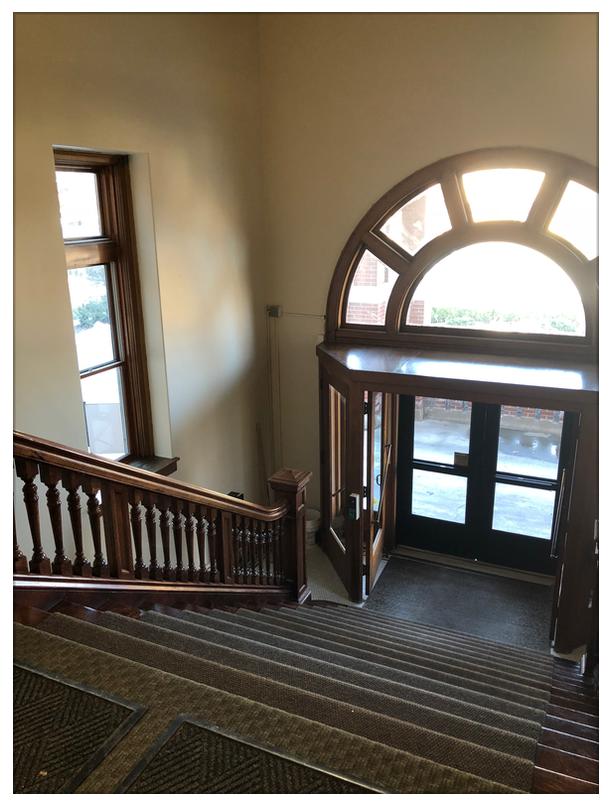 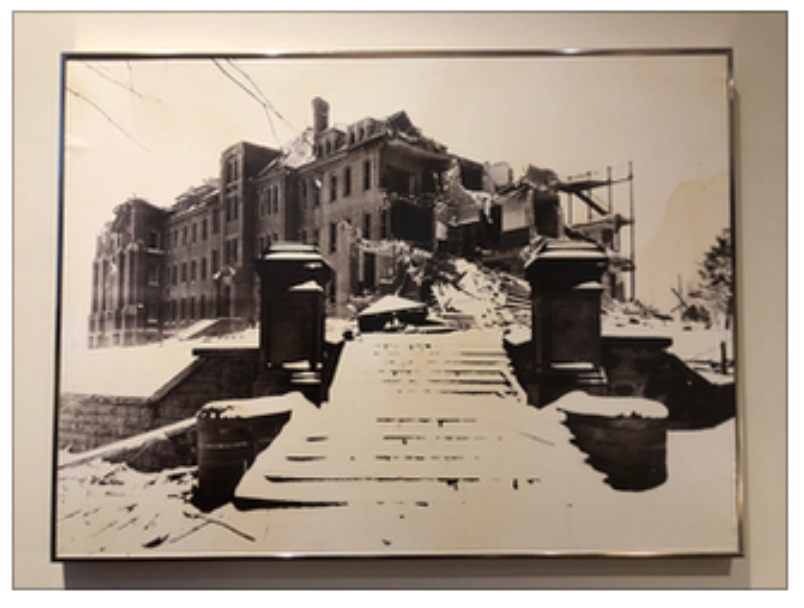 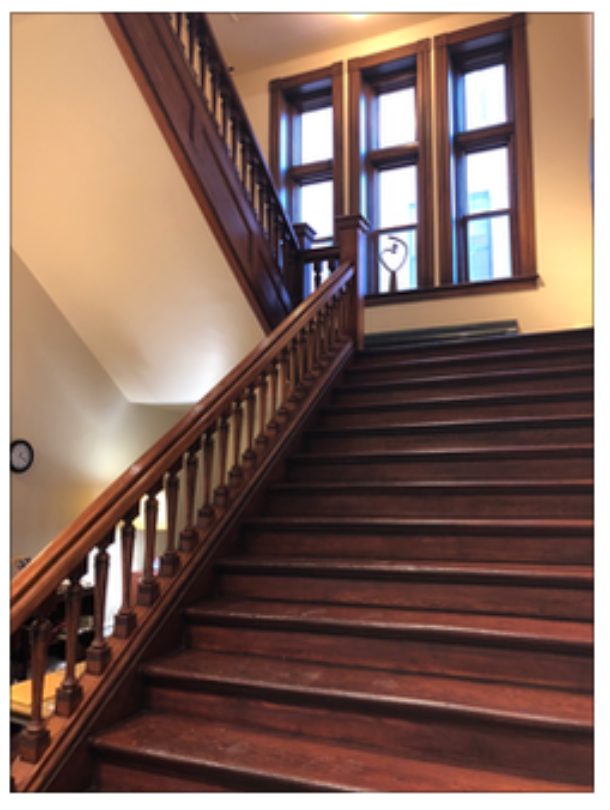 The Academy of the Sacred Heart was opened in 1881 by Mother Margaret Dunne and other Religious of the Sacred Heart (RSCJs), a society of nuns founded by Madeleine Sophie Barat in 1800 in France during the aftermath of the French Revolution. Barat herself had been educated beyond the social norm for women in her time and had a vision of educating young women. Sr. Rose Philippine Duchesne brought the vision of the society to the United States in 1818.

In August of 1881, Mother Dunne and the nuns moved into a large brick home at 9th and Howard Streets that they rented from the McShane family for $650 per year. According to the House Journal, the house was in very bad shape with windows that would not close, inch thick dust everywhere, no furniture, and some of the floor missing. They were able to get it cleaned up and prepared for use. In October of 1881 they started their school year with just three students. By Christmas that year they had fifteen students.

The following year, they moved to an area called Park Place, which is the current location of Duchesne Academy at 3601 Burt Street. The history behind this location is that the land was twelve acres “west of town” and had been purchased by Bishop James O’Connor for $2,533.34 in 1880. The bishop, who had been a chaplain at the Sacred Heart school in Pennsylvania, hoped they would open a boarding school in Omaha. He sold the land to the RSCJs in February 1882 for just one dollar. The campus borders were California Street to the south, Burt Street to the north, Kennedy Street to the east (now 36th Street), and Pleasant Street to the west (now 38th Street). In their journal, they refer to the new building as their “house.” Work was begun on the new house in May of 1882, the cornerstone was laid on June 16, 1882, and the nuns and students moved to the new building in November of that same year. The building cost $62,140.

The building saw two major additions in the late 1880s. The first addition to the original building was the north wing in about 1887. The second addition to the west of the new north wing included space for a new library and added sleeping quarters on the third and fourth floors. Thomas Kimball designed and added the chapel in 1909. This addition was to the south side of the original building. Kimball was one of the top architects of his time. He also designed the nearby St. Cecilia’s Cathedral.

On Easter Sunday in 1913, a tornado struck and completely destroyed Duchesne’s entire north wing. No one in the building was hurt, which seems miraculous given the amount of destruction. The students had gone home for the Easter holiday, and most of the nuns were in the chapel. There was one nun who had been bedridden, but some debris fell around her in such a way that it actually protected her from other falling debris. At the time, they were uncertain whether Duchesne would be able to reopen then or ever, but a funding drive allowed them to rebuild.

In 1915, the RSCJs opened a liberal arts college in addition to their academy. The college and academy were separate entities from each other. The Nebraska State Board of Examiners approved the college in 1916. The first college graduates of Duchesne in 1917 were Alice McShane and Margaret Phelan. The college and academy were separate entities. The building saw another addition in 1920. This new wing contained several classrooms a gym, and dormitories. This addition was on the northwest side and stood four stories high. The school officially changed its name to Duchesne College and Convent of the Sacred Heart. Duchesne College became affiliated with Creighton University as its women’s college.

The college continued to grow. To accommodate the growing college, the building saw yet another addition. The construction began in 1930. The addition opened in 1931. This wing ran parallel to 36th Street and contained an auditorium, more classrooms, and science labs. This created a need for more housing for students, so another addition included dormitories built above the existing chapel. (Today these dormitory rooms are storage rooms.) In 1937, thirteen women graduated from Duchesne College, and enrollment continued to rise. The college enjoyed good years for a couple decades. In the early 1950s, Duchesne College started offering a four-year college nursing program in conjunction with St. Francis Hospital in Grand Island. Also in the 1950s, the campus added a building for the elementary school, a dormitory building, and a humanities building.

The 1960s brought struggles for Duchesne College. Tuition was increasing, and interest in co-education was increasing. Enrollment dropped but expenses continued to rise. Unfortunately, Duchesne College had to close in 1968. Mrs. Judy Enenbach Quest was a sophomore at Duchesne College in 1968. She was the president of the sophomore class. There were several other colleges in the area, such as the University of Nebraska, Creighton University, and College of St. Mary. Duchesne College was the smallest college with enrollment of about 300 students and simply could not survive. Mrs. Quest said the students were informed in February, 1968, of the decision to close the college. Students had to scramble to make plans for the following year. Mrs. Quest worked to pay for her way through college and wanted to be a teacher. She went to the University of Nebraska – Lincoln because she could complete her coursework there in the shortest amount of time.

Many updates occurred over the years to the building and campus. A 2003 upgrade included the addition of a “connector” building. This addition was between the rebuilt north wing and the 1920 addition to the west. This connector piece contained additional classroom space, a new elevator, new restrooms, as well as provisions to make that part of the building accessible. In 2013, the auditorium and theater area were updated. This included another elevator added which made the entire building fully accessible.

Duchesne Academy went through drops in enrollment in the 1980s but survived through those tough times. By the mid to late 1990s, enrollment started rising again. Duchesne Preschool reopened in 1999. Duchesne was recognized twice as a National Blue Ribbon school. In 2006, Duchesne celebrated its 125th anniversary. Duchesne Academy is part of a network of Sacred Heart schools. The network has 22 locations in the United States, and in 43 different countries.

Duchesne: One Hundred Years of Growth in Love and Learning. Centennial publication. 1981.

Duchesne: One Hundred Years of Growth in Love and Learning. Centennial publication

Duchesne: One Hundred Years of Growth in Love and Learning. Centennial publication