In the late 1950s, conservation groups began to show interest in the wildlife area near Missouri Valley. In March of 1958, the federal government established a refuge in the wetlands. Originally named "DeSoto–Bend National Wildlife Refuge and Recreation Area", the area was approved by the Migratory Bird Conservation Committee. It was established a safe haven for migratory birds and a space for public recreation. Today, the wildlife refuge spans over eight thousand acres of land. It is located about thirty miles north of Omaha, near Missouri Valley, Iowa. Migratory waterfowl, like ducks and geese, regularly stop at the refuge during their migration periods. The refuge is located directly on the Missouri River and is affected by seasonal flooding. The refuge is open to the public from April 15th until October 14th each year. Certain roads are closed in the refuge from October 14th until April 15th due to fall and spring bird migration. During the winter, if the ice is thick enough, ice fishing is allowed on De Soto Lake.

Route of Lewis and Clark 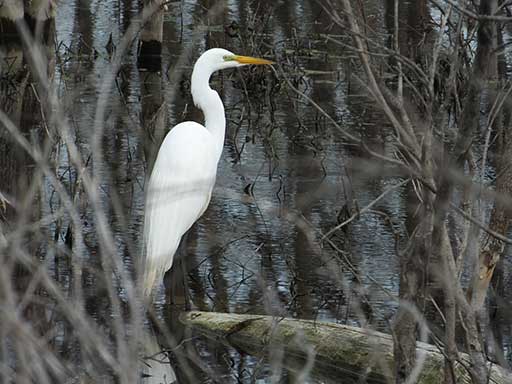 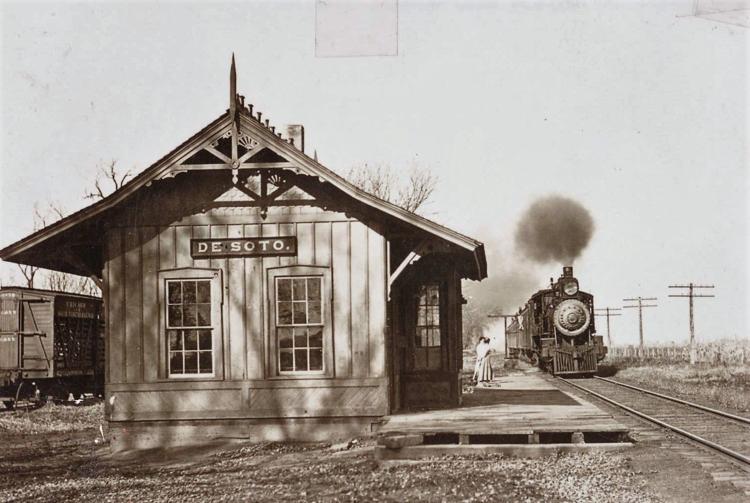 View from a trail at the refuge

View of Missouri River from Refuge

Long before the wildlife refuge existed, explorers Meriwether Lewis and William Clark, along with their crew, made their way up the Missouri River in the early 1800s. President Thomas Jefferson had employed these explorers for a specific reason. They needed to explore, record, and learn more about the newly purchased Louisiana Territory. The Corps of Discovery, the name given to Lewis, Clark, and their men, set out in May of 1804. Along the way, they documented plants and wildlife, met many groups of Native Americans, and searched for a waterway connecting the Pacific Ocean to the rest of the country. The group of explorers camped near the current-day site of the wildlife refuge for multiple nights on their journey. They camped near this site during July and early August of 1804.

The refuge gets it name from a town originally located on the river called DeSoto. The river bends in this location and, for this reason, the name of DeSoto Bend suggested itself. DeSoto, Nebraska, incorporated in 1855, prospered for about a decade before most of its residents moved on to gold fields in Colorado. After a shift in the river channel in the late nineteenth century, the town was situated a few miles west of the Missouri River. This shift in the river, and establishment of the town of Blair, led to the demise of the town.

An important doctrine of wildlife refuges is compatibility. Mentioned in laws as early as 1918, this doctrine has been a central part of refuge administrations. Three main ideas of the compatibility doctrine include: wildlife is a public interest, sanctuaries exist for the protection of wildlife, and administrators are accountable for enforcing protection. The first idea is that wildlife is owned by the people and must be protected. The second idea dealt with sanctuaries. This idea was a major difference between national parks and wildlife refuges. Originally, wildlife refuges were not meant to be visited by people. Whereas national parks became tourist attractions, refuges were meant to protect wildlife from people. The third idea dealt with accountability. Refuges were meant to be used as intended. For humans to visit the refuges, administrators had to prove that wildlife would not be affected.

The seclusion of wildlife refuges did not last. In the 1940s, a shift in policy helped open up the refuges for recreational purposes. One of those purposes was hunting. Congress opened up refuges, established after July 1st, 1949, for limited hunting opportunities. In 1962, in an attempt to protect wildlife refuges, Congress passed the Refuge Recreation Act. This act placed the burden of proof onto the Secretary of Interior. Human activity on the refuges could not interfere with the safety of the wildlife.

In the late 1950s, conservation groups worked with the government to establish the DeSoto Wildlife Refuge. This area was designed with the intent of providing a safe-haven for migratory birds and a public recreation area.The Migratory Bird Conservation Commission approved the refuge in March of 1958. Today, the refuge boasts over 8,000 acres of protected land.

A second bird using the refuge is various species of duck. Although the numbers of ducks on the refuge are not as high as geese, they still make up a large proportion of the visiting waterfowl population. Mallard ducks are the most frequent visitor to DeSoto. Other ducks have been reported to stop by the refuge but their numbers are extremely low compared to Mallard numbers.

Eagles, a third type of bird common on the refuge, make up a small number of the overall bird counts each year. Bald eagles, the national bird of the United States, make their nests in the refuge in the spring; and some remain through the winter. The number of eagles that visit the refuge each year is small compared with both geese and duck visitors.

Each season brings out different types of wildlife within the refuge. In the spring, a large variety of wildlife populates DeSoto. Waterfowl, on their yearly migrations back to the north, stop at the refuge. Eagles stop here on their way north as well, while some use nesting areas throughout the refuge. In the summer, visitors may see Blue Herons, wood ducks, or turtles throughout the refuge. Fawns may be seen in the high grasses, staying near their mothers. In the fall, the refuge becomes an important stopping point in winter migration. Eagles, mallards, and other birds arrive here in search of food, on their journey southward. In the winter, most of the birds have migrated southward. However, some eagles, and ducks, stick around on the refuge despite dropping temperatures.

Over the years, the refuge has faced changes and flooding due to the Missouri River. In the 1960s, the Army Corps of Engineers shifted the main channel of the Missouri River to prevent flooding. This shift in the channel left behind a large body of water called an Oxbow Lake. The water left behind from the channel shift became known as DeSoto Lake and remains part of the area today.

The shift in the river left the refuge in an interesting position. Although the Missouri River usually signifies the boundary split between Nebraska and Iowa, it is not the case for the refuge. The wildlife area resides in both Iowa and Nebraska and yet remains completely east of the Missouri River. As a visitor first enters the refuge, they remain in Iowa. If you continue to drive further into the refuge, the border shifts. A "Nebraska" sign allows visitors to know exactly when they have transitioned from Iowa into the Cornhusker State.

In 2019, the wildlife refuge was under siege from flood waters. Historic flooding destroyed farmland, homes, and livelihoods throughout the area. Roads in the refuge were wiped out and a large clean up effort was needed to restore the area.

Johnsgard, Paul, A. Lewis and Clark on the Great Plains : A Natural History. Lincoln, University of Nebraska Press, 2003.