The earliest part of Castle Cornet was built between 1206 and 1256. It is most famous for its use as German fortification during the 2nd World War when the Germans occupied the Channel Islands. It is connected to the main land by a long quay built in the 1860s. It was also used in the medieval times as a fort and still has the portcullises that were used against the French, in the invasion of Guernsey. Castle Cornet now has many museums. 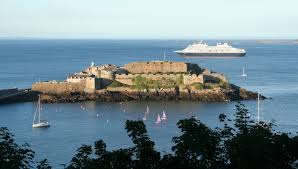 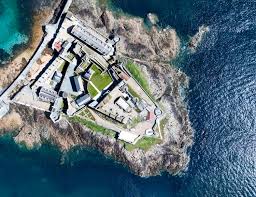 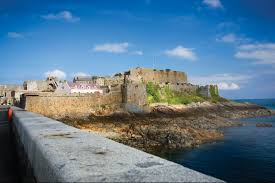 The Noon-day gun is one of most popular and impressive sites. It is fired daily throughout the season by keepers clad in scarlet costumes who will stay and pose for photos with you after every firing. From at least the early years of the 19th century they fired a gun from the castle at noon and once more at 21:30 to get the attention of the soldiers of the garrison to ask them to return to their barracks. It was called the curfew gun. Originally it was shot from the cavalier battery on the citadel, the gun was a 9-pounder but was swapped with an 18-pounder. Guernsey stopped using the gun in 1973 because it was too expensive. However in 1974 it returned as a visitor attraction. It is shot using a saluting charge of 25 grams. The noon-day gun is a cast iron, Blomefield pattern, cast by Carron foundry in 1799. There is a serial number on the left side imprinted in the iron (60208). It also carries the arms of King George. It has a calibre of 6.41 inches, the gun would have shot a 32 pound heavy, iron ball with a huge range of roughly 2500 yards. It is supported by the only original wooden garrison and iron wheels. The carriage as well as the gun used to be located on the Parade Ground at Les Beaucamps’s arsenal, it originally had a chapel, with a draw bridge to the gate and a walkway around the walls.The castles foundations are composed of ancient crystalline rocks mostly granite which formed deep in the earth’s crust which have been around for at least 10 million years.

Castle cornet was built between 1206 and 1256. As you enter the castle you walk through the barbican, above you will be a port coulis. You then see the reception. Entry fee for adults is £10.50 and for children (7-18 years) & students (with valid student cards) the fee is £3. You then have the choice to turn left towards the story of castle cornet museum or you turn right and walk up towards the noon day gun and the rest of the castle. There is also café which is housed in the 18th century upper barracks, as well as toilets. There are guided tours of the outer areas of the castle run at 10:30am. There are children's trails to follow and activity sheets, get them from the castle shop, also Guernsey's Accredited Guides run tours. There are also 4 museums that you can visit, two of which are the 'Royal Guernsey military museum and the royal Guernsey light infantry museum' the military museum has display's of incredibly restored weapons and uniforms, the Royal Guernsey light infantry tells the story of the regiment during WW1 it contains artefacts uncluding meddles and WW1 soldiers in combat with tanks engins and gun fire sounds, thye have lots of decriptions making it a good learning experience