The Grand Army of The Republic Memorial Hall was a building constructed in 1894-5 for a fraternal organization known as the Grand Army of The Republic (GAR). This organization was composed of Union Civil War veterans. The building housed the meeting place for these veterans, much like the V.F.W. and D.A.V. halls do, but also held other events. After the last of the civil war veterans died in the first half of the 20th century, the hall became a U.S. Civil War Museum for the town, and for Nebraska. It is the only Civil War Museum in Nebraska. 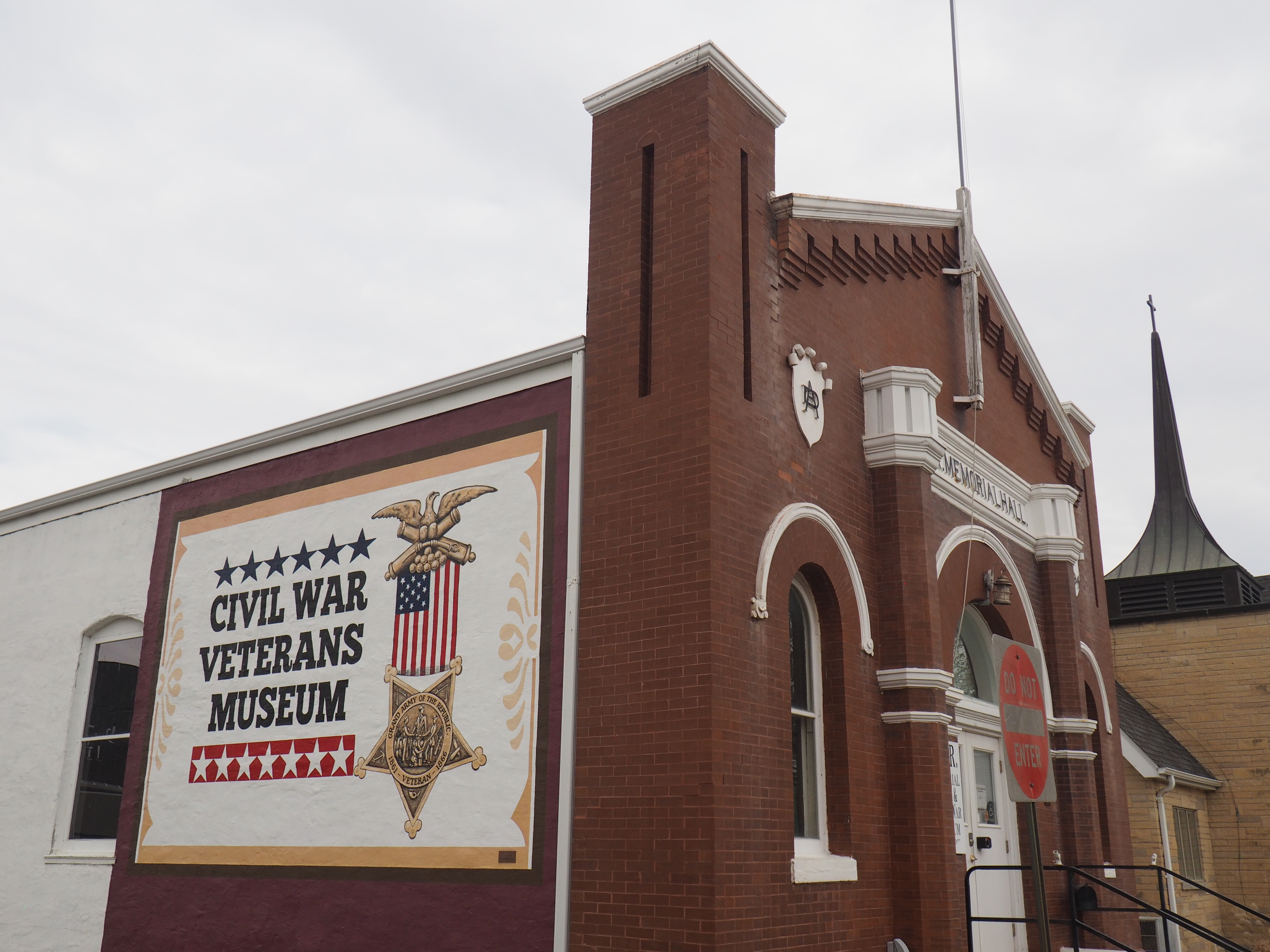 Front facade of hall. White trim is featured quite extensively throughout. 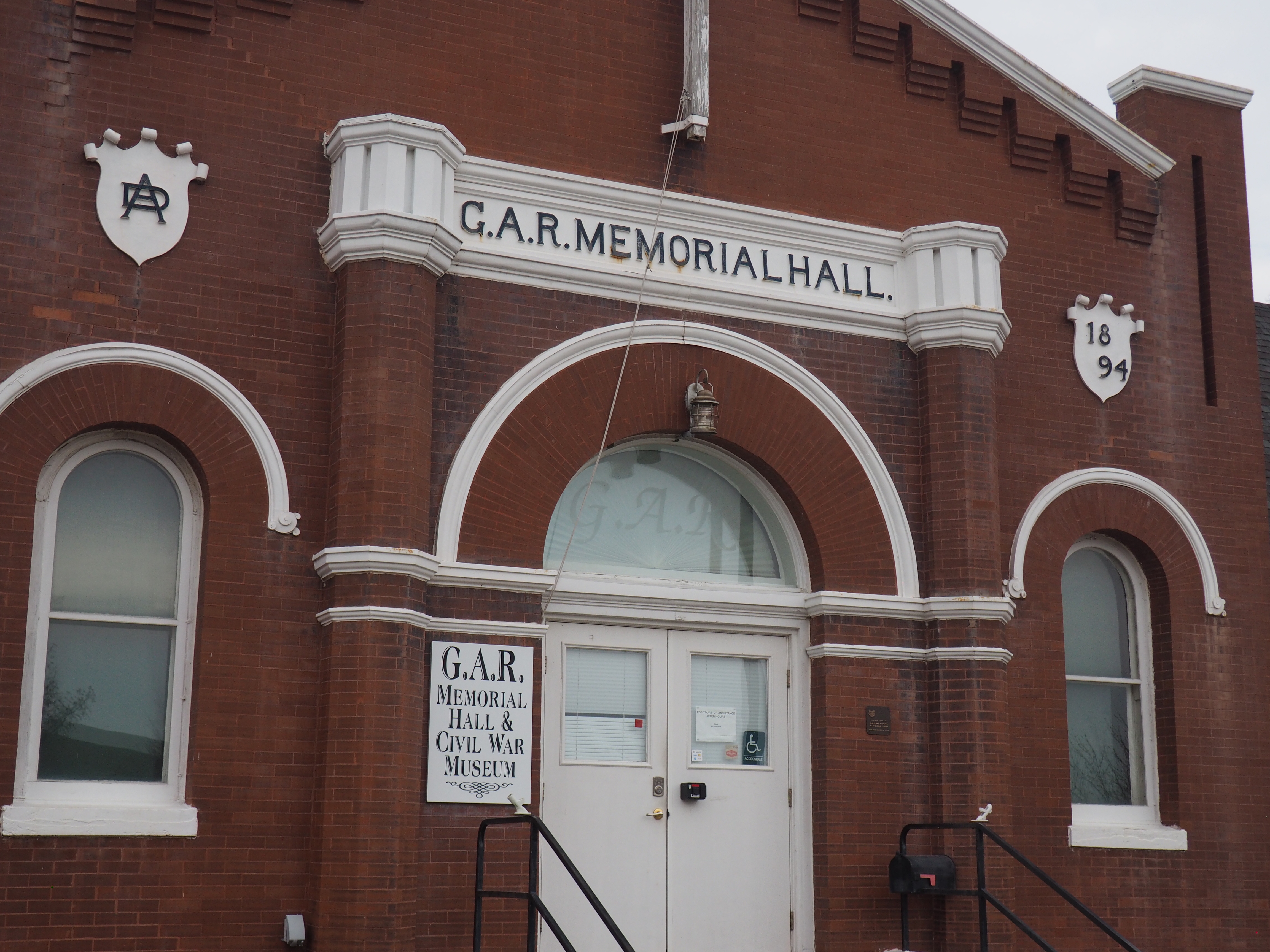 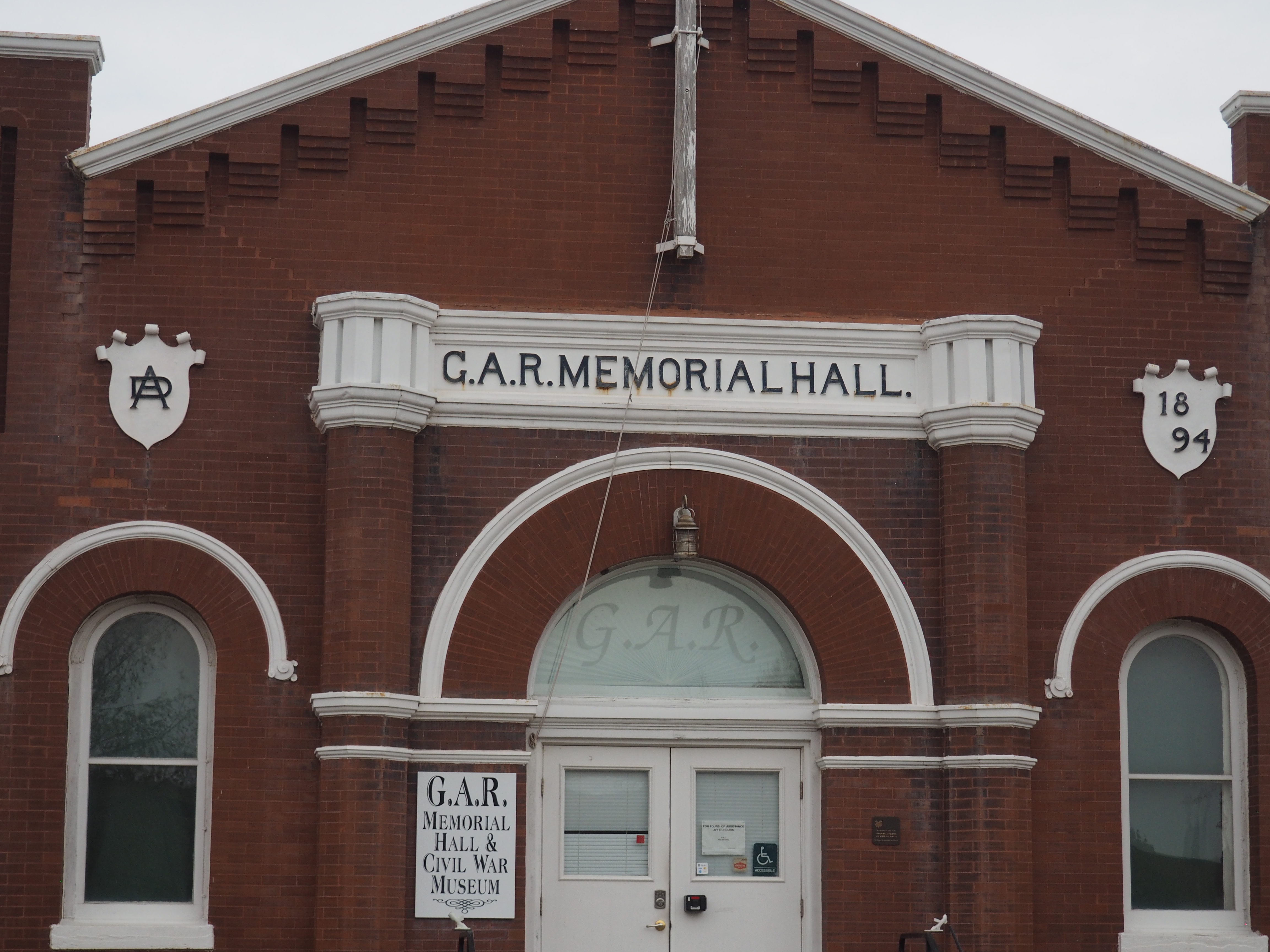 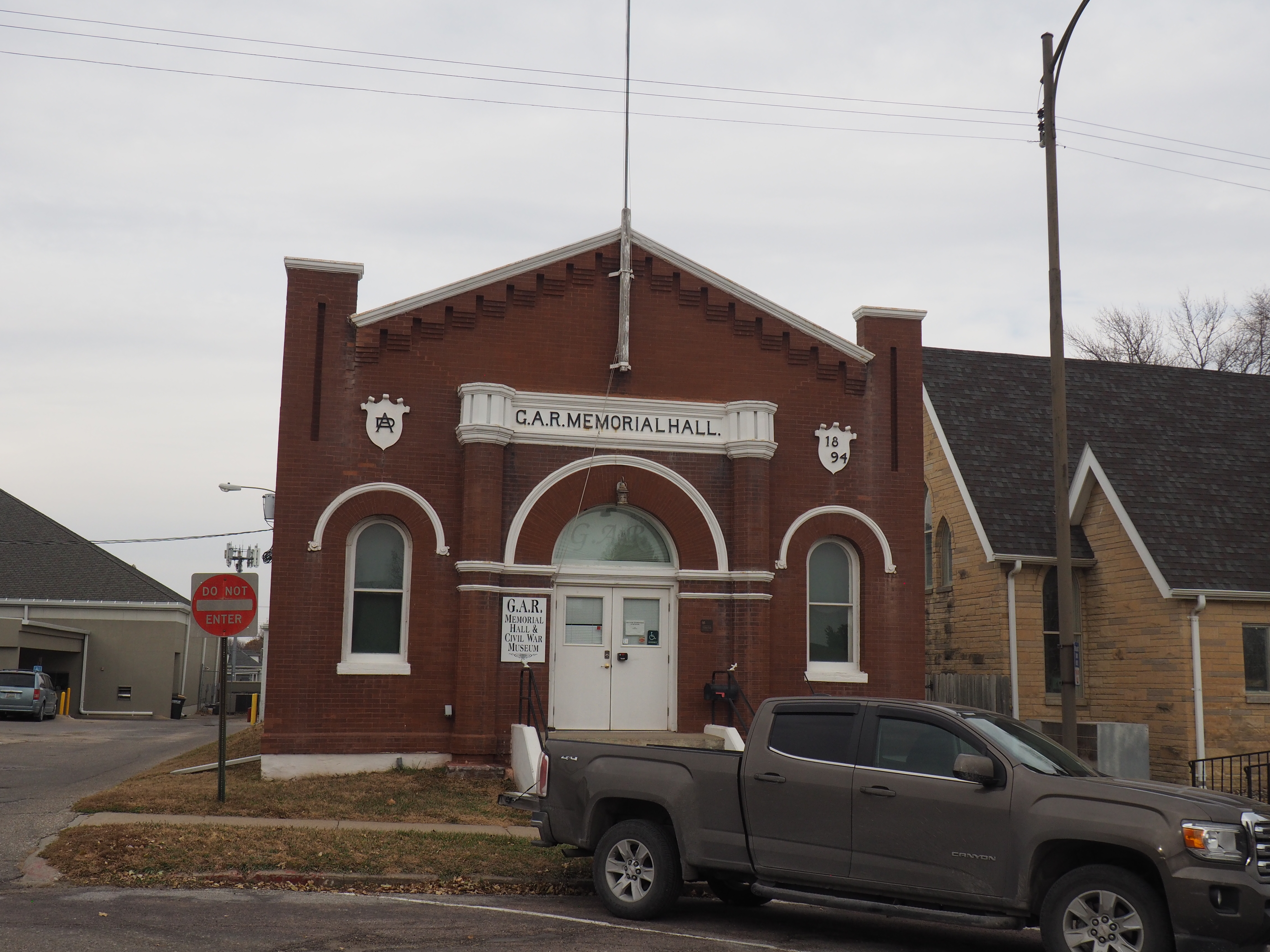 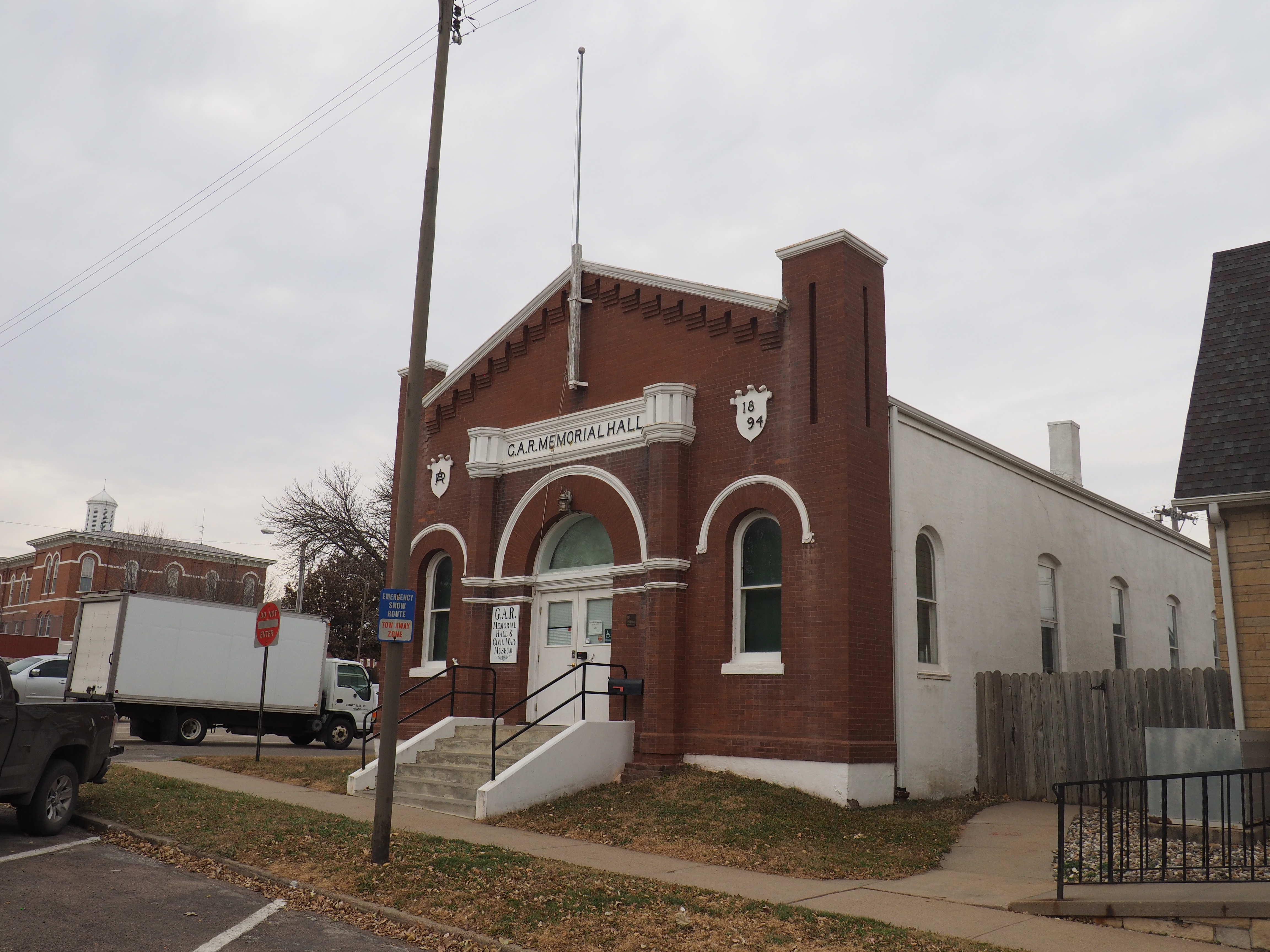 Many Union veterans took advantage of the Homestead Act and sought better lives in Nebraska. They helped settle the state and in turn, began to form new communities like Nebraska City. Of course, communities sprouted organizations like this. Nebraska City's charter of the GAR (Grand Army of the Republic) is dated 1890. The post was named for a deceased veteran, which was typical in the practice of the GAR, Col. William Baumer of the Nebraska Regular U.S. Volunteers.The plot of land was purchased partly by the trustees of the William Baumer Relief Corps–the women's auxilary to the GAR.

The building itself is of Richardsonian Romanesque design. It features a large meeting room to house the GAR. The building is not very large and does not have many other rooms in it on the account of it only being one story and the large hall dominating the majority of the real estate The hall was built by the prominent Omaha-based architect group Fisher & Lawrie, Sitting on less than one acre of land, the building is made of brick with brick and stucco walls-although stucco was not applied to the front facade- and has an asphalted, gable roof. Above the front windows are two metal plaques. The one on the right gives the construction date, 1894. On the left is the GAR emblem.

The GAR was a fraternal organization composed of U.S. Civil War Veterans from different branches of the military. They, like other veterans groups, were formed to act as a support group for those veterans and what they experienced throughout the war. The organization donned many hats: fraternal organization, charitable society, special-interest lobby, patriotic group, and social club. It promoted patriotism and helped celebrate holidays such as Memorial Day or Independence Day. The GAR were most prolific throughout the latter half of the 19th century and saw a general decline in membership as the 20th century arrived. The last member of the GAR, nationally, passed away in 1956.

Nebraskans organized 356 GAR posts between 1866 and 1908, the first in Omaha. in 1866. It is interesting to note that this building was built very late in this organization's history. Due to the deaths of elderly veterans, the GAR began to lose membership by the 1930s. In 1940, only a few posts remained operational to their original intentions. In 1944, the last encampment was held in Lincoln, NE. Only one member attended. On December 24, 1948, Michael Bondoll of Beatrice passed away; he was the last surviving GAR member in Nebraska.

The Grand Army of the Republic Memorial Hall remained active until 1934 when the hall was replaced by a newer building.

Today, the hall is utilized as a state Civil War museum featuring artifacts from both sides of the conflict.

Open from roughly April to October and closed during the winter.