The Labor Movement and the Klu Klux Klan

In the early 1920s, the KKK flourished in Pittsburg, Kansas. Its origins began in Pittsburg Kansas and, despite pushback from public officials, crept into the rest of Kansas. In July of 1923, the Klan showed its contempt of a ban on hoods by hosting rallies across the state openly wearing their infamous hoods. In Pittsburg, the terrorist group hosted a barbecue in public to defy the rule of law. Their recruitment tactics lured over 4,000 Crawford County residents, creating one of the most powerful KKK chapters in the state. The propaganda included racist myths against the Black miners which attracted the striking white miners and anti-Catholic/Jewish messaging. Their hateful ideology was demonstrated on July 23, 1923, as they proudly marched around the streets of Pittsburg in hoods. The story of the hardworking miners that built the Pittsburg economy is proudly shown on the memorial, but what is often left out is the KKK’s influence over those striking workers and their control over the town’s economy, politics, and society as a whole.

In July 1923, the local chapter of the KKK in Pittsburg hosted a rally against the Governor Allen’s ban of hoods. This year was at the height of the terrorism instilled by the Klan. 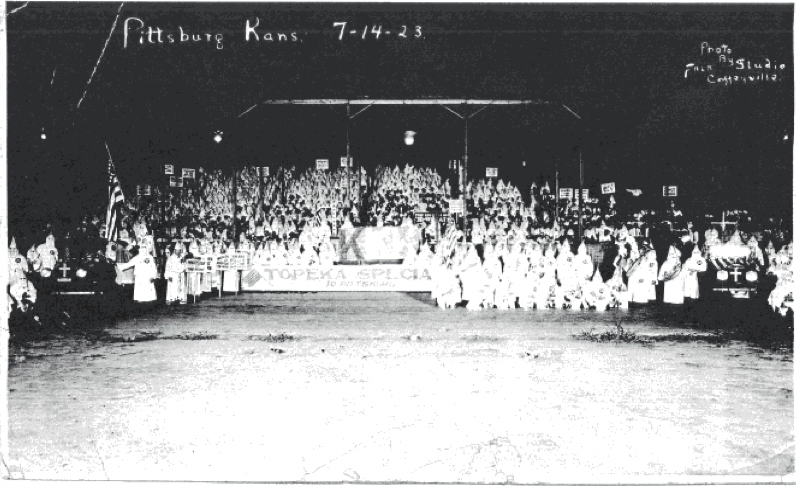 "A Real American Goes Hunting" was drawn by Rollin Kirby and published in the New York World. This was published during Allen's campaign for governor when his stance was anti-Klan 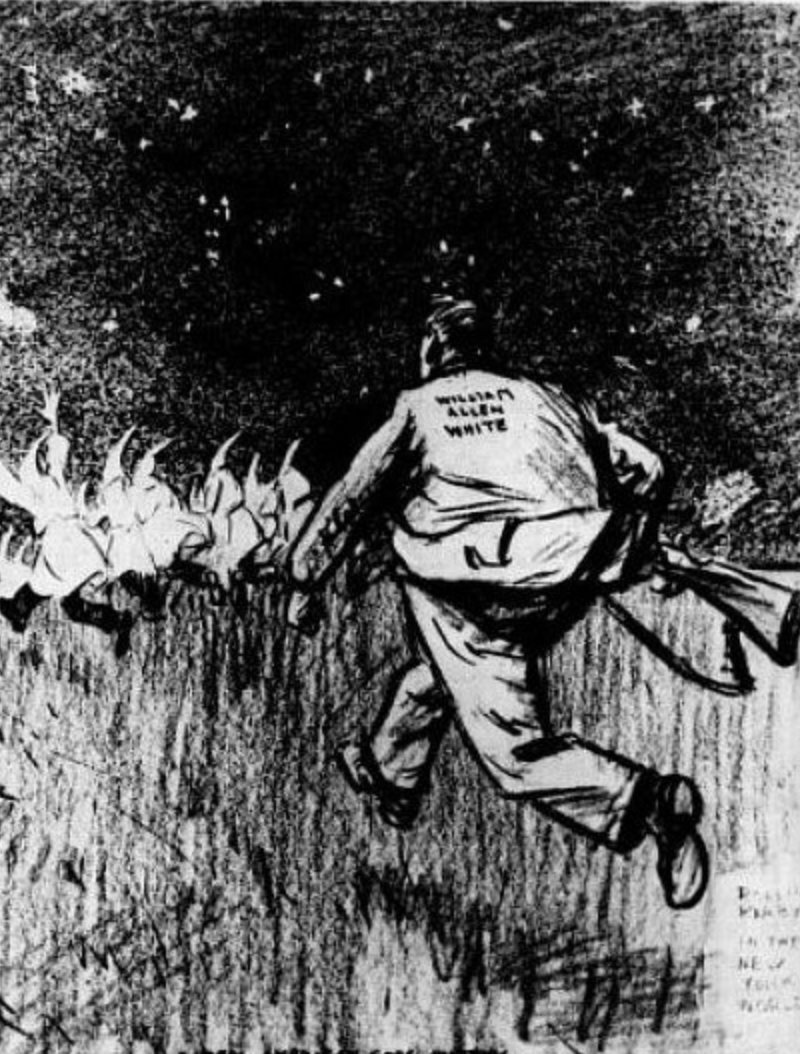 A newspaper of the time that reported the activity of the Klan and Davis' stance on hoods.

A newspaper of the time that reported the activity of the Klan and Davis' stance on hoods. 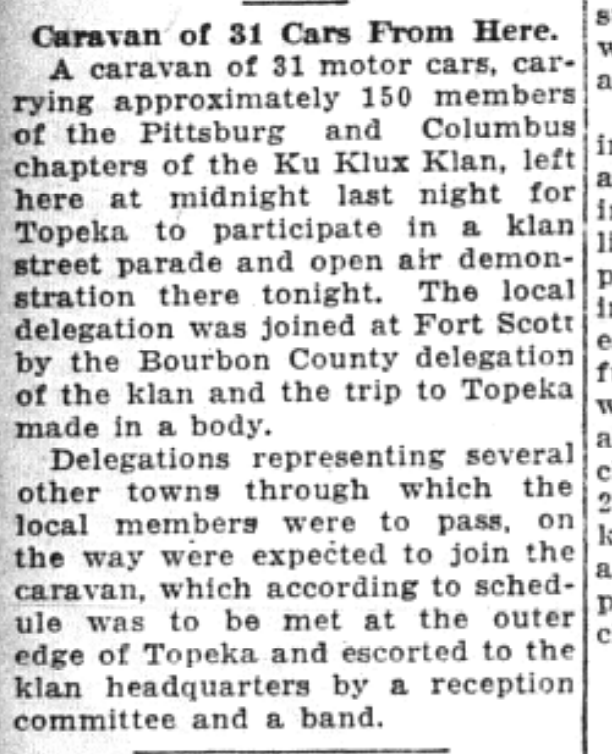 When the first African slaves were brought to what is now known as the United States, the elites of the time used racist tactics to pit indentured servants against and slaves. In creating this divide between these two groups, they prevented massive revolts against their exploitation. Centuries later, a similar scenario played out across the country, but more specifically, in southeast Kansas. While Confederate monuments were being erected across the country at the highest rates in history, the KKK began to infect its way into the Sunflower State.

The increase of immigrants and “hyphenated Americans” along with the stress of working conditions allowed for the KKK to thrive in southeast Kansas. In 1919, one of many labor strikes occurred. Coalfields were shut down by the leadership of Alexander Howat. 10,000 miners went on strike until Governor Henry J. Allen took control of the situation and called for volunteers, or strike busters, to work the mines. The continuous strikes also led to the companies hiring strike-breaking Black workers. At the time, many Black Americans were fleeing the South in search of better-paying jobs. Many of them settled as miners in the Midwest. The intersection of labor strife and an increase of ethnic, racial, and religious minorities cultivated the perfect environment for the Klu Klux Klan.

The state's capital became the city with the largest KKK chapter at 5,000 members. Pittsburg was the third largest with 4,000 members in 1923. With the white working class's labor distress at full swing, the KKK directed their anger towards the minorities, rather than the elites. For this reason, Pittsburg was one the biggest chapters for the KKK.

While its spread was rapid, there was some pushback within the government at the time. Mayors across Kansas and the governor actively spoke out against the “the greatest curse that comes to civilized people” (Jones). Governor Allen in 1922 worked against the KKK. 1923 became one of the most crucial years for the KKK. During this time, there were massive demonstrations against the KKK and in favor of the group. The main organizer of the KKK, H. H. Kitchen, was jailed in Shawnee County after refusing to reveal the names of other Klansmen. Other attempts to subdue the hate group included the prohibition of hoods and masks. Instead of seeing the group diminish, they organized mass protests with their infamous uniforms. Numerous events sponsored by the KKK were held in Kansas, but Pittsburg became a usual spot for the southern area of Kansas. After many demonstrations, the KKK protested the hood ban in Pittsburg by wearing their uniform and hosting a barbecue. This rally was not unique to Pittsburg. There were reporting of multiple rallies across Kansas the same day protesting the same hood ban.

Despite the legal actions Governor Allen took, the Klan focused on gaining political capital at the local and state level. This would certainly end the career of one of Klan’s worst enemies. The Klan succeeded in taking down the governor and putting one who turned a blind eye to their struggles, but in turn, struggled statewide to elect more positions who were unabashedly for the KKK. Local elections tell another story, however. The KKK took hold of the elections by any and every means necessary. In Liberty, Kansas, a mayor was flogged by the KKK. In the spring of 1923, the Klan gain control of Pittsburg’s school board and city commission. This allowed for the printing of anti-Klan newspaper to be relocated and subsequently be replaced by a pro-Klan newspaper: The Independent. Further, the public schools of Pittsburg were also mandated to keep bibles in each classroom and read from a bible verse. Though the hold on Kansas local and state politics were strong and the fear they stoke high, the KKK eventually, along with the nationwide organization, fell. After years of controlling local, county, and to some extent the statehouse, the KKK finally began to wane in 1926. The grand wizard of the Klan was welcomed by progress and anti-Klan activist, William Allen White. In the Emporia Gazette, an anti-Klan newspaper, White described that what was “once a thriving and profitable hate factory and bigotorium now laughed into a busted community” (Jones 52). Allen’s welcoming signaled the decline of the Klan. They no longer had a massive influence, instead, the group diminished into the shadows.

These events are largely ignored in southeast Kansas, and especially in Pittsburg. While a miner’s memorial stands next to the public library and city buildings, there is no mention of the strife Black miners underwent because of the Klan. Crawford County held one of the biggest populations of the Klan, yet there is no plaque, history books, or memory site. The memorial that stands today is very similar to that of the Vietnam Veterans Memorial in D.C. The names etched into the Black wall in Pittsburg signify the workers and deaths due to mining, but there is no remembrance to those who were terrorized by the KKK. There is no mention to the KKK as a whole. This memorial is also closely associated with Immigrant Park and often hold protests against the very thing many of these miners endured, and sometimes, endorsed. The pits left behind from these workers are commemorated by the very name of the town, but what is forgotten is the exploitation the KKK did and its affects.

The Klu Klux Klan’s presence in Kansas falls into the category of forgotten memory. Pittsburg was a haven for the KKK. In light of economic and social strife, the KKK took hold of those exploited workers and began to spread its hateful ideology. Despite state and local attempts to diminish their influence, the KKK used its social and political capital to expand its reach across the rest of Kansas. The events the 1920s perfectly embody this state’s struggle against the KKK.