Lucy Stanton (1831-1910) was a born free black immediatist abolitionist and feminist of the second part of the nineteenth century in North America. She is the first woman to have graduated with a four-year university degree, in the United States from the Ladies Literary course in Oberlin College in 1850, and her most famous speech “A Plea for the Oppressed,” she delivered at her graduation ceremony expresses her vivid antislavery sentiments. She dedicated her life to the instruction of former slaves and African American children all around the United States and Canada. But she did not only take part in the abolitionist and feminist movements, she also took part in the temperance movement. Like her first husband, William Howard Day, who was a driving force of abolitionist at the national and local levels, they were also involved in the Chatham Vigilance Committee, and she helped him with his newspaper the Alienated American.

“A Plea for Oppressed” in the Oberlin Evangelist of December 17, 1850.

The only portrait of Lucy Stanton 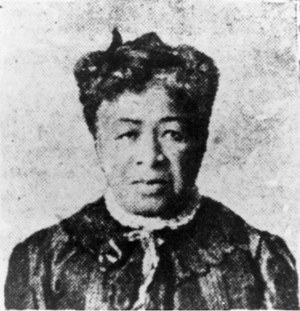 Oberlin College inquiries on the occupation of its former students 1894. 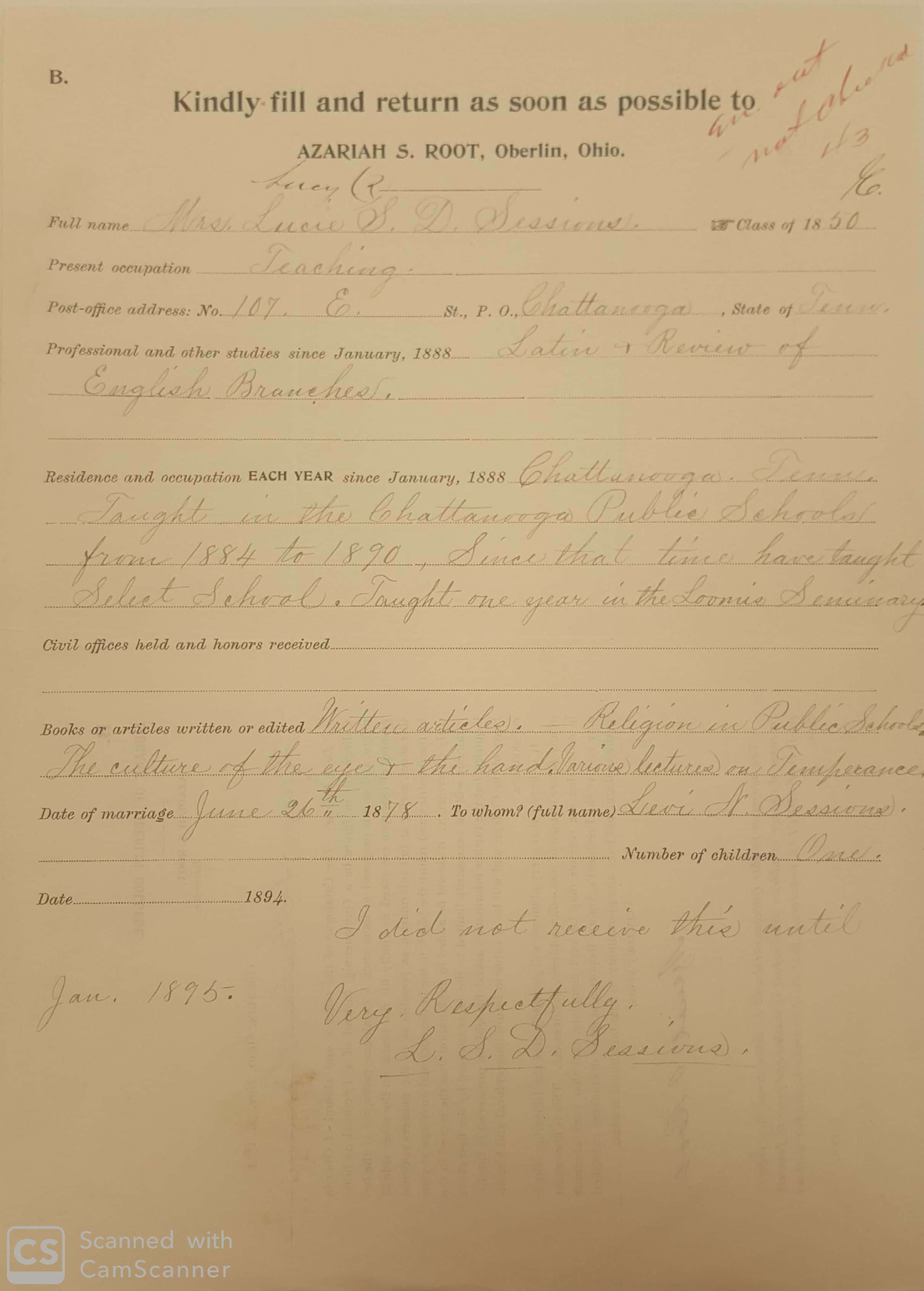 Oberlin College inquiries on the occupation of its former students 1905. 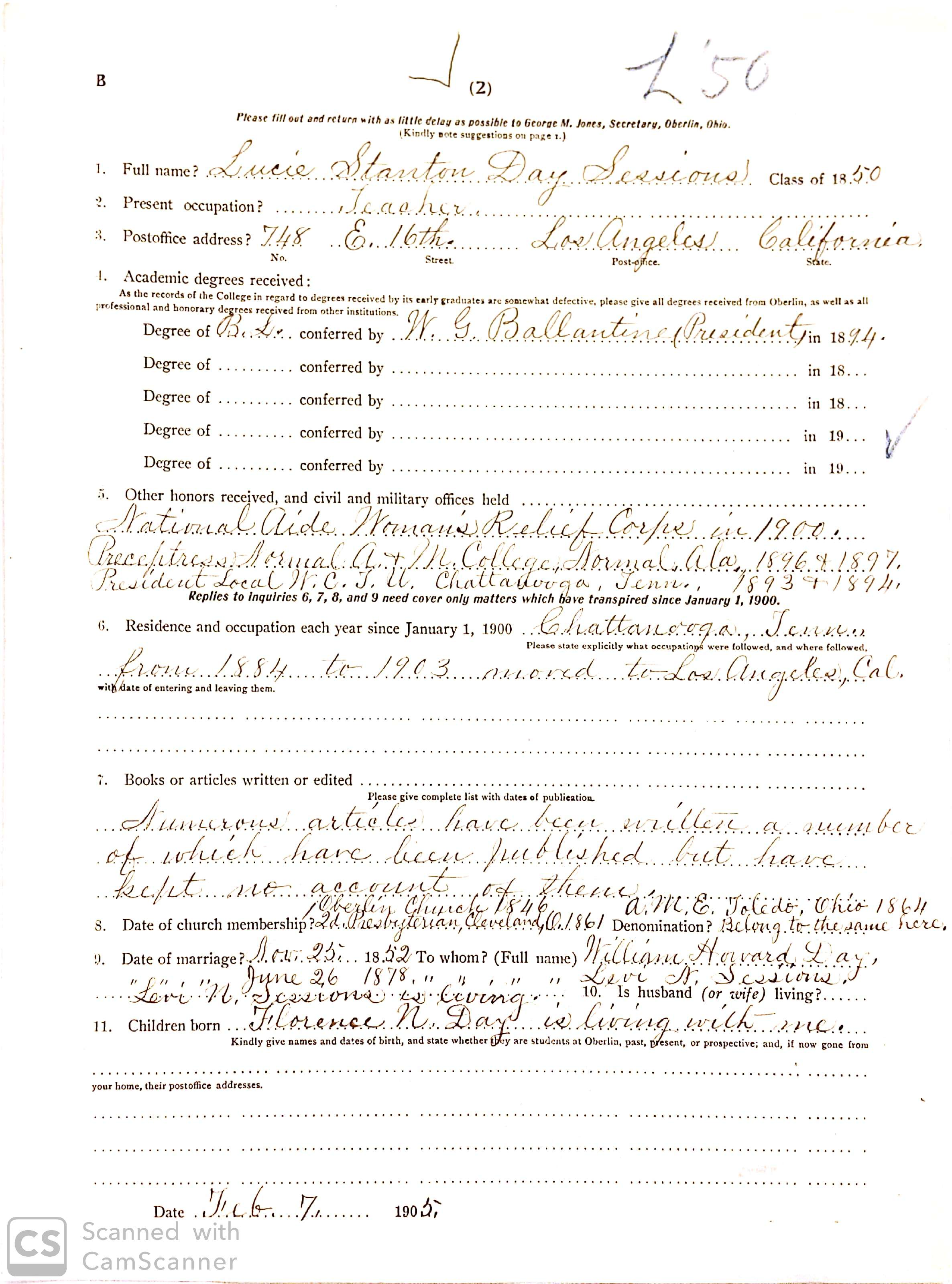 Lucy Stanton is the first woman to have graduated with a university degree in the United States. She achieved this accomplishment in Oberlin College thanks to their open policy regarding the inclusion of both women, since their opening and African American after 1835.          The opening to coeducation and to the students of colour made this university a nest for racial egalitarianism and antislavery activism.[1] Lucy Stanton’s dedication to teaching linked her to the guideline of early feminists, such as Mary Wollstonecraft. As African Americans and women needed education to seek equality from the American government.

Lucy Stanton’s time in Oberlin College was the most documented part of her activist life. She was very involved in the university life as President of the Ladies Literary Society of Oberlin College. That enabled her to take the stand at a crucial moment of student life. She was invited to deliver a speech at her graduation ceremony, “A Plea for the Oppressed.” The speech is very important to understand Lucy Stanton’s personality, as she expresses the urge for women to join the fight against slavery. Lucy illustrates her speech with an example of the separation between a mother and her child to persuade her female classmates to join the movement. She also adds a notion of honour to the resistance against the institution of slavery and the established order. That speech was so well-received that it was published in the Oberlin Evangelist. That speech was delivered in the context of the 1850 Fugitive Slave Act which made the fight of abolitionists even more difficult by penalising the help of fugitive slaves with imprisonment and a fine.

After her graduation, Lucy Stanton became a teacher. She taught freed slaves and young African Americans all around the United States and in Canada, for the rest of her life.1 She was involved in several abolitionist associations to taught mostly to freed slaves. A vocation that can also be linked to the impossibility she faced as a child to be accepted in a school because of the colour of her skin. Which obliged her stepfather to open the Cleveland Free School for African American.[2] Lucy Stanton moved all around the United States, but she kept being involved in many feminist or abolitionist organisations and had a significant place in some of them. She also had a leading position in the African Methodist Episcopal Church in being the president of the Mite Missionary Society.1 The connection of Lucy Stanton with the Church shows that the intertwining of the social movements and the faith in the nineteenth century was not only possible but also played an important role to promote women in leadership positions.

In 1852, she married William H. Day, who she met in Oberlin College and who was a prominent local figure of the abolitionist movement, which recalls the importance of Oberlin College as a gathering place of abolitionist activists. Her husband founded the first abolitionist newspaper of Cleveland, the Alienated American2, in 1853. Lucy Stanton helped him in his work, but it is difficult to know how. The two of them were also involved in the Chatham Vigilance Committee for some time, helping former slaves who had fled slavery from the United States to Canada.[3] Fighting for the freedom of slaves was not new for her as she was exposed to that kind of activism since her childhood. Her stepfather, John Brown was a very active member of the Underground Railroad, who welcomed up to thirteen fugitive slaves in their house at the same time.[4] Lucy Stanton’s husband abandoned his family not long after the birth of their child, but she only accepted to divorce in 1872.[5] Lucy Stanton’s professional life is the reflection of the difficulty for women to sustain themselves and to be on the public sphere if they were not in a traditional family situation. Lucy Stanton might have been educated and pious, she was not accepted by the American Missionary Association (AMA) in 1864 because of her distant relationship with her husband. The fact that she was living away from him was not respectable. Because of that, she had to take care of her child by herself and earn some money as a seamstress, when waiting for “adequate employment.”[6] But she would eventually be hired by the AMA in 1871 for a teaching position.[7]

Lucy Stanton is the first woman to have graduated from a university degree but most of the work that is remembered from her happened in Oberlin College. She represents the many women who were “the great silent army of abolitionism” because of her work as a teacher for the African American youth and former slaves, she expressed her commitment for education and the necessity to educate the oppressed minorities of North America.

[1] Carol Lasser and the students of History 266 at Oberlin College. “How Did Oberlin Women Students Draw on Their College Experience to Participate in Antebellum Social Movements, 1831-1861?” Alexanderstreet. May, 2002. Accessed 10/10/2019. http://womhist.alexanderstreet.com/oberlin/intro.htm

[5] Hoak, Lisa, Dan Quigley, Essie Weiss-Tisman. “’I Shall Have Your Sympathy,

If Your Judgment Refuses Me Your Support’: Lucy Stanton Day, the American Missionary Association, and the Politics of Respectability.” Oberlin College Archives. Accessed 10/10/2019. http://www2.oberlin.edu/archive/teaching/projects/hist213/stanton/intro.html

Hoak, Lisa, Dan Quigley, Essie Weiss-Tisman. “’I Shall Have Your Sympathy, If Your Judgment Refuses Me Your Support’: Lucy Stanton Day, the American Missionary Association, and the Politics of Respectability.” Oberlin College Archives. Accessed 10/10/2019. http://www2.oberlin.edu/archive/teaching/projects/hist213/stanton/intro.html

Lasser, Carol and the students of History 266 at Oberlin College. “How Did Oberlin Women Students Draw on Their College Experience to Participate in Antebellum Social Movements, 1831-1861?” Alexanderstreet. May 2002. Accessed 10/10/2019. http://womhist.alexanderstreet.com/oberlin/intro.htm