The Old First Church of Bennington replaced the town's original church in 1805 and has remained largely unchanged since that time with the exception of restoration. Designed by Lavius Fillmore, the church was dedicated on the first day of 1806 and has served the spiritual needs of the community for well over 200 years. The Federalist church features box pews, high pulpit, marble steps, bell tower, soaring single-piece columns, and Palladium windows. The church went through major renovations in the 1930s and was designated by the state as “Vermont’s Sacred Shrine” and the associated cemetery as “Vermont’s Sacred Acre” during the same decade. The church is open to both parishioners and visitors alike during its “open church season” for tours from Memorial Day through mid-October. The Old First Church has been listed on the National Register of Historic Places since 1973.

Side view of the church with cemetery in the foreground that contains the graves of Revolutionary War soldiers and Robert Frost. 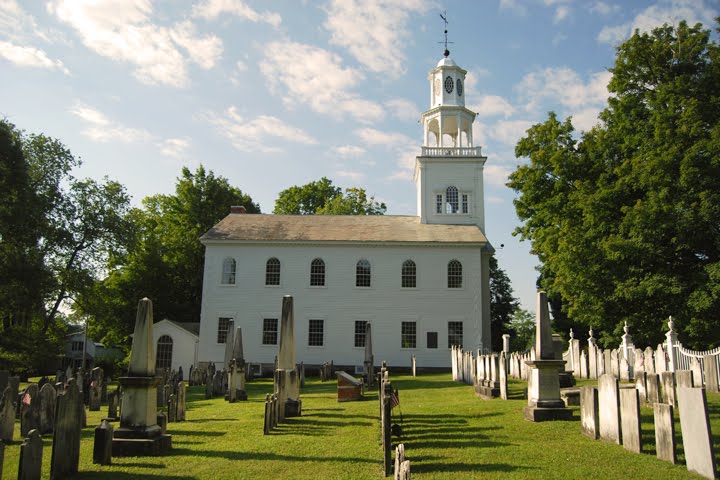 The interior of the church with box pews and high pulpit. 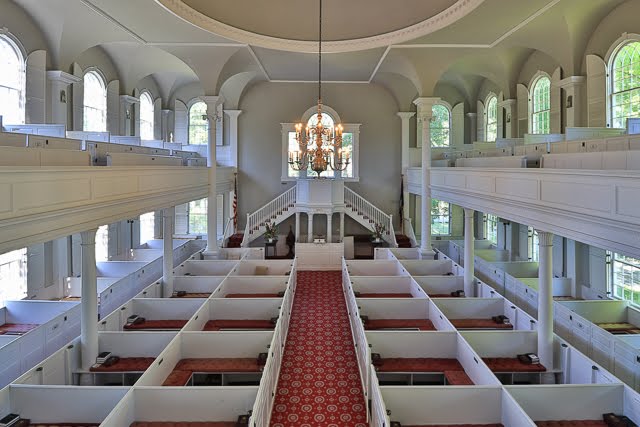 The Old Church Barn, which is used as a community meeting center. 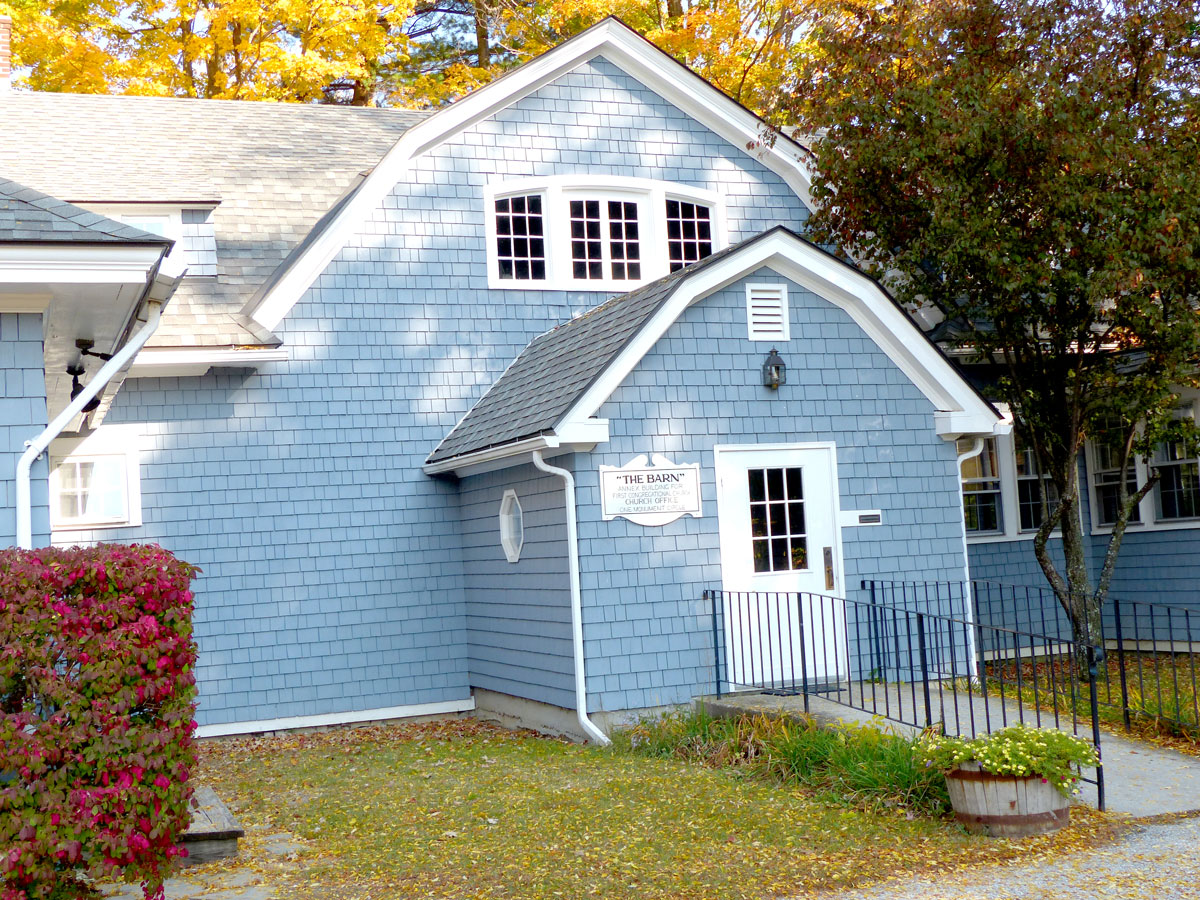 After the British and the colonists defeated the French at Quebec during the French and Indian War, religious “separatists” from western Massachusetts and Connecticut arrived in what is now Bennington in 1761. Inspired by the First Great Awakening, these “New Lights” established their congregation in 1762 and built their first house of worship/meeting house in 1766. This multi-purpose building, aside from religious services, hosted state legislative sessions, court trials, town meetings and wounded Hessian prisoners after the Battle of Bennington in 1777. However, as with all expanding congregations, the worshipers of Bennington found it too small to meet their needs as the 18th century turned to the 19th and talk of replacing it ensued.

As the talk progressed, funding issues were discussed and the church leaders decided to raise the money for their new church by “selling pews” to church members. During this time, it was not unusual for members to buy their own personal pews for their families at auction. The funding plan worked and the distant cousin of President Millard Fillmore, Lavius Fillmore, was employed to design the new church. Fillmore drew extensively for his design from a drawing (plate 33) from Asher Benjamin’s "The Country Builder’s Assistant." Filmore designed a two-story wood-framed structure with projecting entry vestibule, three-stage bell tower and wooden clapboards. Inside, he designed a domed, cruciform ceiling known as “The Cross of Christ Embracing the World,” supported by six massive, single-piece, hand-planed and carved columns of white pine. Along with the box pews, Fillmore added a high pulpit accessed by a double staircase.

The church was completed in late 1805 with the dedication taking place on New Year’s Day, 1806. Over the course of the 19th century, thoughts on church design changed and the box pews were removed and replaced with heavy, dark-colored benches. In addition, the high pulpit was removed and replaced with a choir loft and organ with pipes that covered the large Palladium window. A noisy furnace with exposed ductwork was also installed. By the 1930s, the interior design winds had changed again, and Reverend Vincent Ravi-Booth began lobbying to restore the church back to its early 19th century status. Despite the country being mired in the Great Depression, funds were raised and new box pews were installed, the high pulpit was rebuilt, and a new steam heating system was put in place. The church was then rededicated in 1937 and American poet, Robert Frost, read his poem, The Black Cottage, at the ceremony. It was also during this time that the state legislature designated the church as “Vermont’s Colonial Shrine.”

Today, the historic Old First Church of Bennington still serves the needs of the community as a place of worship and as a special events venue along with its Old Church Barn which is a community meeting center. In addition, the adjacent cemetery has become a tourist site because of its historic graves that include approximately 75 Revolutionary War veterans and British and Hessian soldiers as well. It is also the final resting place of Robert Frost. In addition to Sunday services, visitors are welcome to tour the church from late May through mid-October.