The Wahhoga Village in Yosemite National Park, just North of campground four, is a site which represents the systematic removal of the Ahwahneechee people from the park, over the course of the last one hundred and fifty years. Since the arrival of the Mariposa Battalion in 1851, the Ahwahneechee people have been systematically forced out of the park through means of violence, objectification, and segregation. In 1996 the last Yosemite Indian, Jay Johnson, moved out of his home in the village, marking the complete gentrification of the valley which the Ahwahneechee people had called home for the past 8,000 years. In 2018, Superintendent of the Park, Michael Reynolds signed a document giving building rights and land use to the American Indian Council of Mariposa County. While this attempt at reconciliation is a step in the right direction, the effort is undoubtedly too little too late, and the irony of giving a gift of land back to a people who were forced from their homes onto that land overshadows the sentiment of reconciliation.

Cedar bark houses called Umachas are the first structures to be built in the new village reconstruction. 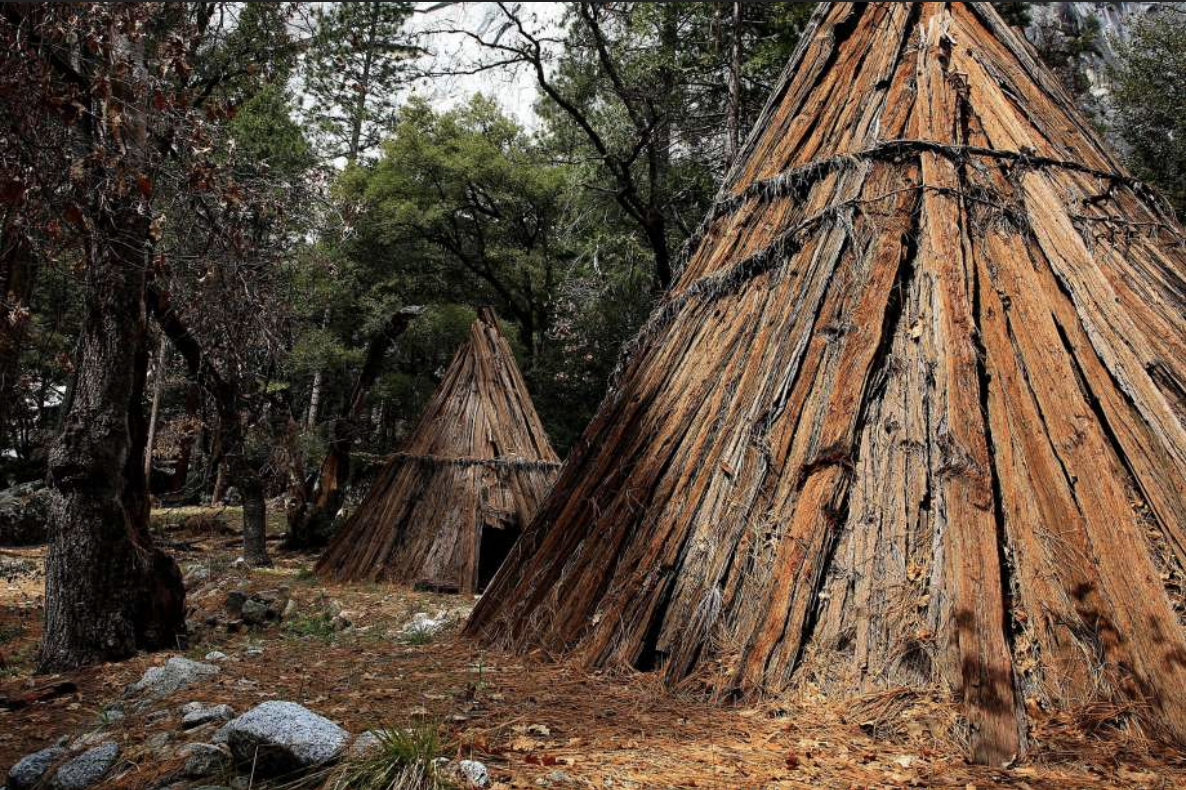 The winner of a basket weaving competition poses with visitors and park officials. 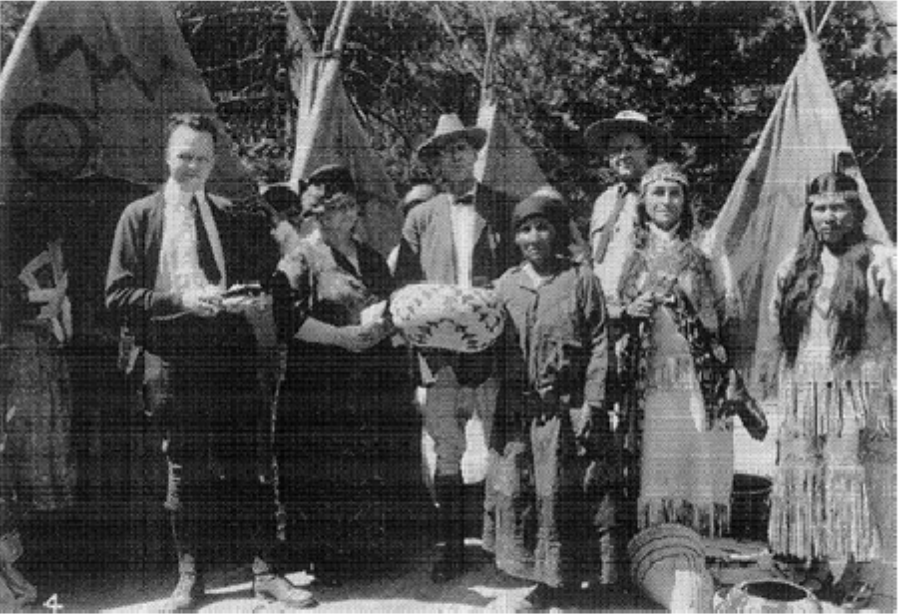 Superintendent Michael Douglas poses with members of the Mariposa Indian Council after returning possession of the Indian Village back to the council. 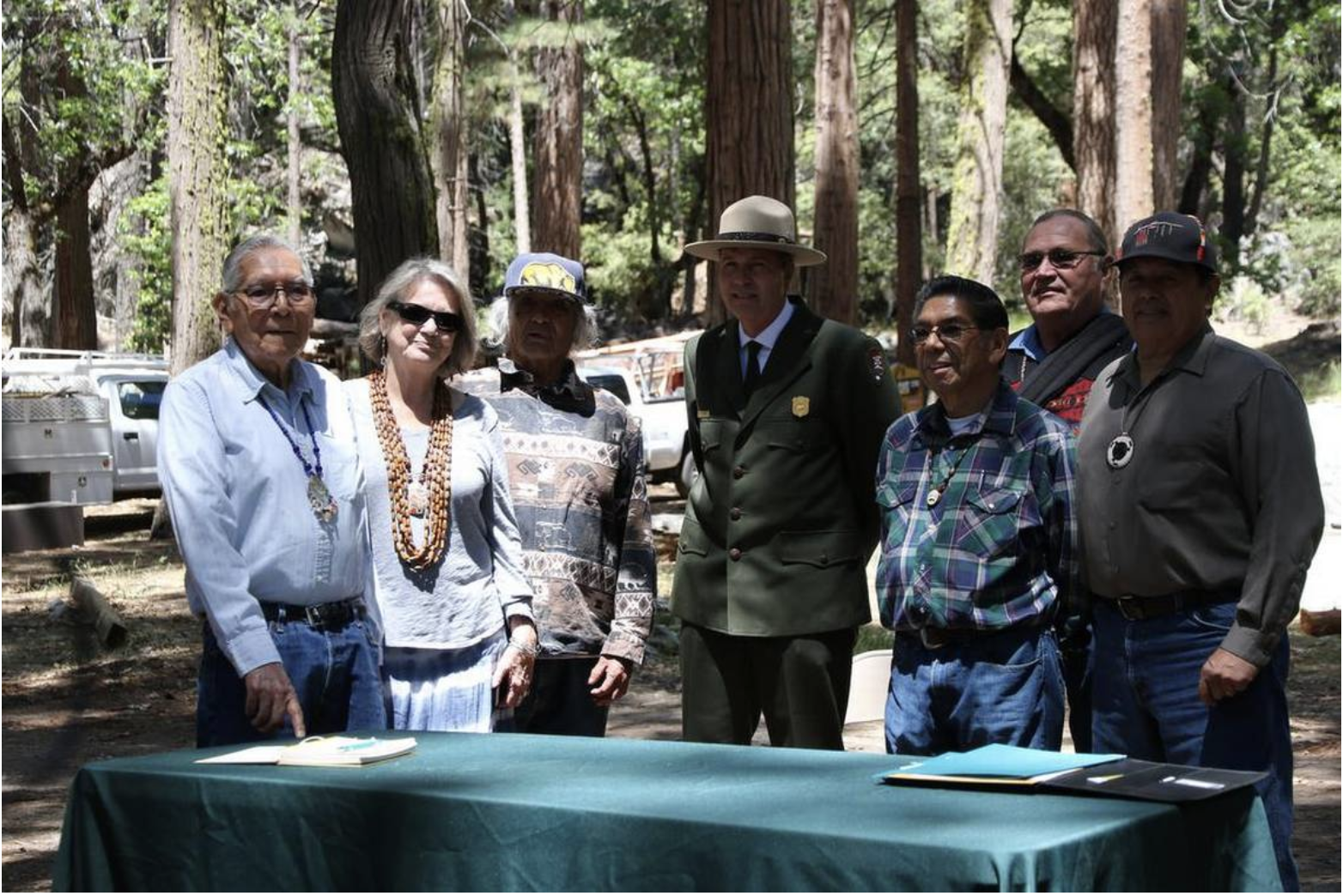 With the discovery of Gold in the American River on the 24th of January 1848, disaster was unavoidable for the Ahwahneechee Indians of the Yosemite Valley. At the beginning of 1848, there were 700 white people living in the California territory, compared to a staggering 150,000 Native Americans. By December 1848, the promise of Gold had drawn 20,000 more prospectors to the territory, and by the end of 1849, there were an additional 80,000 “49ers” living in the soon to be state. The influx of white people would lead to inevitable conflict, and the beginning of the end for the Native tribes of California.

The narrative of enslavement, disease, and genocide which coincides with the American “discovery” of Native lands was no different in the Yosemite Valley, and as the white population increased exponentially, so too did the acts of violence between gold miners, and native people. To make up for hunting and gathering grounds which were lost to new mines and settlements, Indians began to raid trading posts in Mariposa County. In response to the violence, governor Peter H. Burnett sponsored a state militia, who named themselves “The Mariposa Battalion”. The goal of the battalion at first was simply to avenge the men who had been killed by the Indians, and exact revenge for the goods which had been stolen. The one hundred miners enlisted exacted their revenge mercilessly, killing twenty-four, and then forty Yosemite Indians, in two different raids, and both times burning the area where 500 Native Americans had camped. The brutality of the battalion extended beyond revenge into a sport, as one member described the collective group’s perspective of Native Americans as “Animals to be hunted”. (Naming Yosemite).

In early February 1851, the Federal Government attempted to enter treaties with local tribes, offering agricultural land in the San Joaquin valley. On the 15th of February 1851, Colonel Adam Johnston, on behalf of the Federal government gave the battalion “the duty of subduing such Indian tribes as could not otherwise be induced to make treaties”. It was during the battalion’s march into the Yosemite Valley, that Lafayette Houghton Bunnell, suggested that the militia name the valley where they encamped, “Yosemite”, a name that was used to describe the tribes which the Mariposa Battalion was attempting to eradicate. As soon as the majority of Native Americans had either fled the region, or accepted refuge in the San Joaquin valley, publications in newspapers described the uniqueness of the valley and the natural beauty it held, replacing stories of Indian violence. It was these accounts that would inspire John Muir to visit the valley, and later lobby the government for the creation of a national park. On July 1, 1851, the Mariposa battalion desisted, and the few Yosemite Indians who were able to flee the battalion and escape the reservation slowly returned to the valley. However, their troubles were far from over, over the next one hundred years, the park administration would prioritize profit over the rights of Native Americans.

The National Park service was created in 1916 with the passing of the Organic act, which stipulated that to maintain the parks, the new Park service must “provide for the enjoyment of visitors”. In Yosemite, the Ahwahneechee people played a key role in providing entertainment. In the late summer months when crowds in the park dwindled, officials of the park created Indian field days. Rather than a celebration of Native American culture, these celebrations were an appropriation of plains Indians, where every “squaw” dressed in “full Indian costume of buckskin dress, moccasin, and head decoration, would receive two dollars and fifty cents” (Dispossessing the wilderness). These garments had never before been used by any tribes in California, and combined with horse races between bareback riders wearing “traditional warpaint”, and an Indian baby show, the field days were a reminder that the Ahwahneechee were not in the park to live, but to be shown off to white visitors. As the field days ended in 1929, there was a campaign led by park officials to “thicken the undergrowth” surrounding the Indian village, so that it could not be seen by visitors. When Ahwahneechee tribe member Harry Johnson attempted to remodel his home in the Indian village, park officials told him to stop construction as the remodel did not create “harmony with the landscape”. Put bluntly, Johnson’s home did not look “Indian enough”.

As the Indian field days began to decline in popularity, Superintendent Charles Thomson decided that the Ahwahneechee people needed to be completely removed from the park. However, Thomson couldn’t kick out the Indians living there in one move, because the board of the park declared that a loss of Indians would be comparable to “what the loss of deer would mean to our fauna exhibit”. Instead, Thomson began to implement obscure housing rules which slowly removed the Ahwahneechee people from the park. In 1931, Thomson created a new Indian village which was more hidden from the view of visitors, and only those who were directly descended from original inhabitants of the Valley were allowed to stay. Finally, Thomson established a rule which said that only Native Americans who were full-time employees of the park would be able to continue to be residents, and as most of the Native Americans living in the Valley were seasonal workers, a large number were forced to leave the Park. These rules caused the community to collapse, and in 1969, the last remaining resident, Jay Johnson retired, and the last native American left the park.

The new Indian village which Thomson moved the remaining Native American community to further seclude them, was the parcel of land which was given back to the Mariposa Indian council. While the Irony of giving back land which was the culmination of 150 years of oppression and systematic removal is evident, the gift is a symbolic first step to make amends with the Ahwahneechee people.

Ahwahneechee and Park Visitors Pose during an Indian Field Day.