In an unincorporated town called Stull Kansas, way off the beaten path, there is an old cemetery believed by many to be haunted by the Devil. The cemetery was erected in 1869 to accompany a small church that was built there two years prior. Legends of supernatural happenings were said to have been around for over a hundred years but the cemetery gained popularity in November of 1974 after a college newspaper from the nearby University of Kansas, The University Daily Kansan, released an article discussing students’ accounts of haunted happenings at the cemetery. In the wake of the article, students started using the cemetery as a party site rather than a place to pay respects to the dead. This legend has led to the destroying of tombstones and littering of beer cans throughout the graveyard. The significance of this cemetery isn’t about hauntings and paranormal happenings but about how these stories have affected this cemetery and the local community. It is about how people can overlook their ethics to have a thrill. Since this is a public cemetery, it is accessible during the day but after the sun goes down it is considered trespassing to be at the cemetery.

This pictures shows the headstone for the grave of the towns founder Silvester Stull. In the background you can see the ruins of the old church before it was torn down in 2002. This photo, along with many others, portrays the graveyard as an erie place where hauntings are in no short supply. 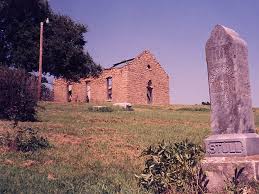 This picture is a depiction of some of the legends that are said to happen at the cemetery. The church was said to have caught fire spontaneously, causing the roof to collapse. There are also stories of witches being hung from a tree in the cemetery as a satanic ritual. This picture is obviously fake but just shows a depiction of some of the stories being told. 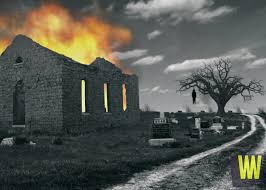 In Stull Kansas, a small-unincorporated town, there is a small cemetery surrounded by legends of witchcraft and devil worship. The cemetery is the focus of many stories in which the devil himself visits the cemetery twice a year. A story from Haunted Lawrence says that even the Pope decided to reroute his plane around the cemetery because the air above the cemetery is “tainted” (Thomas,2017). There are many other stories of students who decided to visit the cemetery and had paranormal experiences while there. Although there are many accounts of this cemetery being haunted, there has been no proof or evidence that backs up these claims.

History of The Cemetery

Stull Cemetery was constructed in 1869 to accompany a small church that had been built two years before. The church was active up until 1922 until is was abondoned for a newer church built accross the road.

Legend of The Devil

According to the legend, in 1850 the devil and a witch have a child together. As you might have guessed, the birth was not successful and the child died and was buried within the cemetery. The Devil is said to visit the cemetery on two nights a year, halloween and the spring equinox, to pay his respects to his dead child. A quote from the article by the University Daily Kansas states "this graveyard is one of two places where the devil appears in person twice a year" (Penner,1974). The old church was said to have a set of stairs that descend into the gates of hell and that is how the Devil is able to come and go to this cemetery as he pleases.

This legend was supposedly started being told throughout the University of Kansas campus started by a college professor. Eventually in November of 1974, the University Daily Kansas released an article telling of the legend as well as many accounts told by students who had visited the cemetery. After this article was released, the story spread like wildfire. Students made trips to the cemetery to get their own taste of paranormal happenings and soon the number of students visiting on Halloween reached upwards of 500 people by 1999. These students visiting soon found out that the devil wasnt going to visit and decided to make their own fun. Students pushed over tombstones and stole them for dorms. Students littered the cemetery with beer cans and vandalized the property. This caused the local community to fight back because their loved ones' graves were being destroyed. The local authorities started handing out fines for trespassing and erected a chain link fence to deter the students from trespassing. The University Daily Kansan also posted an article in 1990 discussing the fines and saying the real evil is the vandalism that happens at the cemetery. In 2002 the original church was torn down which has also helped to keep students from visiting the graveyard. Even though all these precautions have been taken against students visiting, students still continue to trespass on Halloween and the spring equinox to try and get a glimpse of the devil.

The legend of Stull cemetery is definitely an interesting topic and it can be exciting or scary depending on how you look at it. There are stories depicting evil happenings and stories about the devil visiting his dead child but the real story deals with the nature of humans and our ability to be persuaded into doing unethical things just to have a thrill. The local community is hoping that adding all these barriers will cause students to lose interest and hopefully soon leave their cemetery alone.