Originally known as the SPS Tower, the FirstBank Southwest Tower is the tallest building in Amarillo. It is also significant for representing Amarillo's growth, development, and economic stability during the post-World War II period. Built in 1971, the tower is 31-stories tall and reaches a height of 374 feet. Tulsa architecture firm Kelley Marshall and Associates designed it in the New Formalist style. It was added to the National Register of Historic Places in 1971. 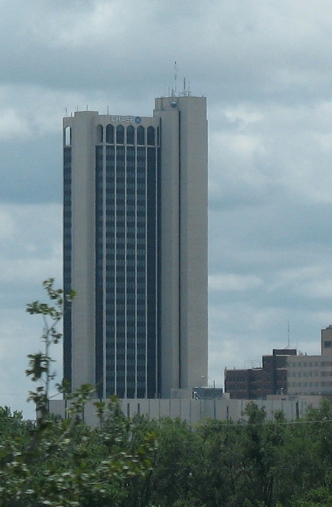 The idea for the tower originated with Tulsa developer, TransAmerica Group, in 1968. It approached a local social/business club called the Amarillo Club, which owned the land on which the tower now stands. The club opened in 1947 and by the late 1960s, they wanted more space, parking, and to offer dinner service—all of which they did not have in their building at the time. TransAmerica offered the penthouse of the tower to the club and they agreed; the club continues to occupy the space today. The project had two major investors and tenants, the American National Bank of Amarillo and Southwestern Public Service, which is a regional public utilities company. The tower spurred the development of the downtown, including the construction of the 16-story Amarillo National Bank, and therefore is a symbol of the city's economic vitality.