The Triboro Hospital for Tuberculosis, a part of Queensboro Hospital, was completed in 1941. It was built to relieve crowding at the larger hospital, which treated tuberculosis patients. It later served as a general hospital in the 1970s. The building, which was added to the National Register of Historic Places in 2019, was partly used for administrative purposes for a number of years. In 2018, after the former hospital sat derelict for some time, a plan was approved to renovate the structure and use it for affordable housing.

The Triboro Hospital as it appeared in the 1940s 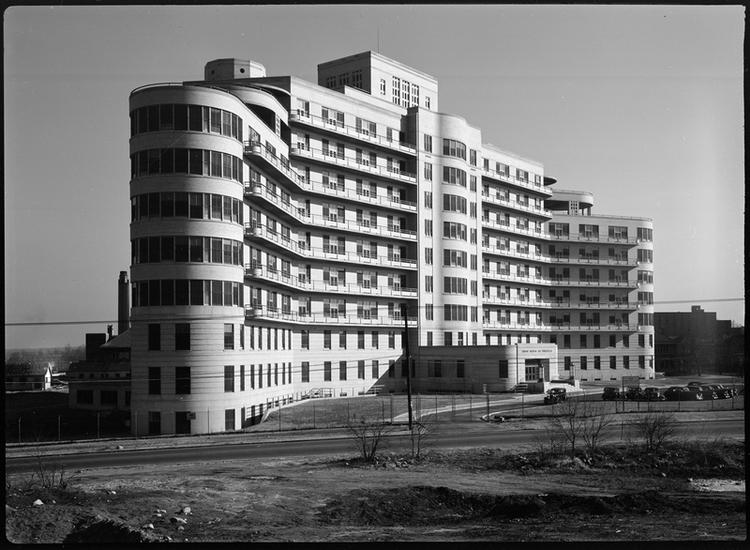 The building as it appears today

In the early twentieth century, tuberculosis was one of the leading causes of death in New York City. This was particularly true in the city's poorest, most overcrowded neighborhoods. Like many large cities, New York had once resorted to isolating patients with tuberculosis and other infectious diseases, including the infamous Typhoid Mary, who was quarantined for 26 years at North Brother Island.

By the 1930s, rates of tuberculosis in the city were still alarmingly high. The city began making plans for a new tuberculosis hospital in 1936. The new facility would be adjacent to the Queens General and Queensboro Pavilion and would relieve crowding in the two older hospitals. The hospital was dedicated by Mayor Fiorello LaGuardia in 1941.

The Triboro Hospital consists of eleven stories, with nine dedicated to patients and two used for mechanical purposes. The building was designed to maximize natural light because of its health benefits, and features numerous sunrooms,and many windows.

After being converted to a general hospital in the 1970s, the building began to decline. It was partly used for administrative purposes in the 2000s, with many of its essential services were moved to other locations. As the building continued to decay, various plans were proposed for its use, including a plan to demolish the structure. Preservationists intervened to save the building. In 2018, plans were approved for the renovation of the structure, which would see it used for affordable housing, including a number of units for residents who were formerly homeless. The redevelopment of the former hospital is expected to be complete in 2021.