The Garden City Brewery dominated the skyline of Missoula from its construction in 1895 to its demolition in 1964. The birthplace of Highlander Beer, the Garden City Brewery was a beloved locally-owned business in Missoula for decades. The Brewery, later renamed the Missoula Brewing Company, survived prohibition, the Great Depression, decades of competition from larger, out-of-state breweries, and a devastating fire before being demolished to make way for I-90.

Garden City Brewery, circa 1908. The first President of the company, Paul Gerber, lived in the house to the right of the brewery.

Highlander Beer parade float circa 1939 - by this point, the company was called the Missoula Brewing Company

Billboard for Highlander Beer circa 1960 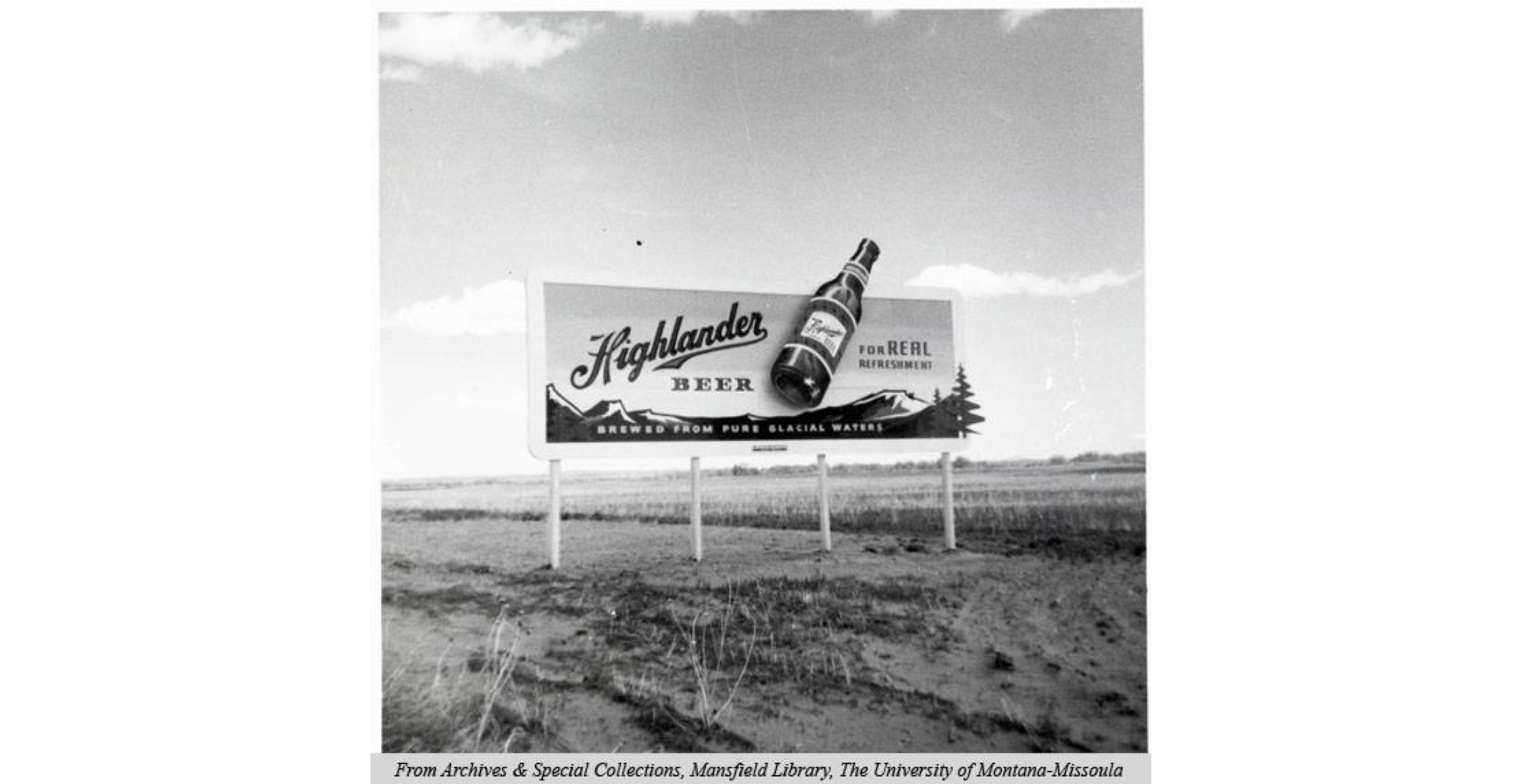 Highlander Beer truck circa 1960 - trucks like this could be spotted around the state, delivering the iconic beer

Interior of the Garden City Brewery before the fire, circa 1955

Demolition of the Brewery, November 1964

Brewing tanks being removed prior to complete demolition, November 1964 - the tanks were later sold at auction

The partially destroyed brewery circa 1965

In the 1890s, Montana was still a new state in the Union. Much of the modern bureaucratic infrastructure had not yet been set up, and many towns were still developing. Missoula, a small town of roughly three thousand people in the western part of the state, was steadily growing. The town’s prosperity was linked to its fortunate location at the hub of a major trans-Rockies trade route and its proximity to abundant lumber in the surrounding mountains. There were few who doubted that Missoula would one day be a major player in the state, as the University of Montana was established in the city in 1893. Sensing an investment opportunity, Martin and Lang, a Spokane-based investment office, constructed a major brewery in Missoula at the foot of Waterworks Hill, along Rattlesnake Creek. By 1900, it could produce 15,000 barrels a year.

The placement was strategic: Montana’s barley was renowned across the nation for its quality, and some investors believed that Montana could become the nation’s leading brewing state with ease. Martin and Lang, hoping for the best, chose what they believed to be the best location in Montana. Rattlesnake Creek had some of the purest water in the state, due to the lack of the mining tailings that afflicted so many other rivers and streams. They settled on the location in 1895 and released the first batch of beer less than a year later.

The brewery was immediately popular; beginning in 1910, the Garden City Brewery’s popular Highlander Beer, a pilsner, became a Missoula icon and a household name across the state. However, the economies of scale quickly became a problem for the brewery. While other, larger breweries could manufacture their own bottles and cans, the Garden City Brewery had to get supplies from larger manufactories in California, Oregon, and Washington. The resulting costs were enormous, and led to lower profits compared to other breweries. (The Budweiser Brewery, for instance, had a bottle plant next door, meaning that bottling products could be bought without needing to waste money on transport.) Additionally, the Garden City Brewery facilities were too small: the building’s equipment simply wasn’t designed to mass-produce alcohol on the same scale as the larger, out-of-state breweries that it competed with. For instance, the Olympia Brewery in Washington needed only 12 men to run 800 bottles a minute; Garden City could run only 160 bottles with 15 men in the same time. (Kutzman 1988) Labor costs were larger, and product yields were smaller. These losses compounded; smaller profits meant less money for market research and advertising, which in turn meant being replaced by the out-of-state competitors. The cycle was vicious, and accelerated as time went on. By the 1960s, the brewery lagged far behind its competitors.

Despite its problems, the Brewery was popular. Highlander Beer billboards could be spotted throughout the state, and Highlander Beer trucks soon became commonplace. The Brewery paid for a parade float as a public outreach program. It became a household name synonymous with Missoula. During Prohibition, from 1920-1933, the company was renamed the Missoula Bottling Company. Upon the end of the Prohibition, the company was again renamed, this time to the Missoula Brewing Company, the name it would retain until its closure.

The winds of change were blowing, though. A fire struck the brewery on April 17, 1956. It wasn't severe, and operations resumed shortly. However, the fire marked the death throes of the brewery and the beginning of the end for Highlander Beer. Sales continued to decline in the following years. In Spring 1960, the Brewery claimed 15.5% of all beer sales in the State of Montana. By spring of 1964, the figure had declined to 9.3%. Additionally, in 1962, the union forced the brewery to increase wages. While the wages of the workers remained low, when compared to the larger, more productive breweries like Budweiser, the profits were likewise much lower. The forced increase in wages led to a forced decrease of profits, which in turn accelerated the death of the Garden City Brewery.

By the 1960s, the interstate highway program was in full swing, and Montana was looking to run Interstate 90 through Missoula. Unfortunately, the physical constraints imposed by Waterworks Hill and the Clark Fork River meant that there was little unoccupied land available for the project. Citing Eminent Domain, the right of the government to forcibly seize property, the state seized property along the proposed route, relocating 60 homes. In April 1964, the Montana Highway Department purchased the Garden City Brewery for $300,000, equivalent to roughly $2.5 million in 2019 currency, to make way for the new interstate. It closed on 31 July 1964, and the state took possession on 30 September 1964. The Brewery was demolished, and not a trace remains visible at present.

However, the people of Missoula never forgot the Garden City Brewery. In 2015, the Highlander Beer Company opened its doors at a new location and resumed production of the beer that had been lost for 51 years.