Maria Mitchell was an astronomer, librarian, naturalist, and an educator. Mitchell is known for being the first female professional astronomer in the United States. Mitchell was the first woman elected to both the Academy of Arts and Sciences and the American Philosophical Society. She discovered a new comet in 1847 that became known as "Miss Mitchell's Comet." Mitchell developed her love for science and astronomy from her father, who tutored her after school hours. The Maria Mitchell house is the childhood home of Mitchell and it defines her origins and the development of her independence.

Portrait of Maria Mitchel by Herminia B. Dassel, ca. 1851 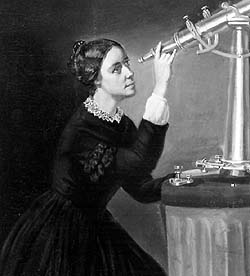 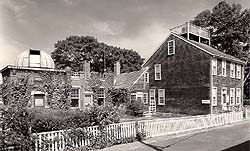 Maria Mitchell was born to Quaker parents William and Lydia Mitchell on Nantucket Island, Massachusetts on August 1, 1818. The Quaker tradition was to teach both boys and girls. Maria received her education at local schools and from her father's tutoring. Mitchell's father, besides being a bank officer (he was a cashier which meant in charge of the whole bank), rated chronometers for use by the Nantucket whaling fleet in celestial navigation, was a great influence in her life. Mitchell developed her love of astronomy and the stars from his instruction on surveying and navigating. At age 12, Maria helped her father calculate the position of their home by observing a solar eclipse. By 14, sailors trusted her to do vital navigational computations for their long whaling journeys (she rated chronometers). By age 17, she created her own school for girls, training them in science and mathematics.

In 1836, she became the librarian at the Nantucket Atheneum, where she gained exposure to great literary and scientific personages. She and her father continued to acquire astronomical equipment and conduct observations. Her father worked as a cashier at the Pacific National Bank and Mitchell would spend her free time on the rooftop observing the skies. On October 1, 1847, she spotted a small blurry object that did not appear on her charts. This is when she discovered her comet. The celestial object subsequently became known as "Miss Mitchell's Comet," with the formal title of C/1847 T1.

From then, her quiet life on Nantucket changed forever. In recognition of her important discovery, Mitchell was presented with a gold medal by Frederick VI, King of Denmark. Consequently, Mitchell became the first professional female astronomer in the United States. In 1848, she became the first woman to be named to the American Academy of Arts and Sciences. The following year, Mitchell made computations for the American Ephemeris and Nautical Almanac. In 1850, she was elected to the American Association for the Advancement of Science. In 1865, she became a professor of Astronomy at the newly founded Vassar College.

In 1861, Mitchell's mother died and she moved to Lynn, Massachusetts with her father. She retired from teaching at Vassar College in 1888 when she became ill. Mitchell died June 28, 1889. She is buried with family members at Prospect Hill Cemetery on Nantucket. The Nantucket Maria Mitchell Association preserves the Maria Mitchell house as a museum that contains many of Mitchell family heirlooms. A domed observatory and a library and research center for young scientists was added to the house after her death.  The Nantucket Maria Mitchell Association was founded in 1903 to honor her legacy and birthplace. Today, the MMA encompasses three observatories, a natural science museum, an aquarium, a library and archives, and the Historic Mitchell House, Maria Mitchell’s birthplace, all of which are open to the public.  For more information visit, www.mariamitchell.org.

“We especially need imagination in science. It is not all mathematics, nor all logic, but it is somewhat beauty and poetry.” –Maria Mitchell