This historical marker notes the location of Klockars' Blacksmith Shop, established in 1912 by Fred V. Wilbert. The forge was owned at different times by three separate proprietors: Fred Wilbert, Edwin A. Klockars, and Tony Rosellini. Ed Klockars began working at the shop in 1928, after emigrating to San Francisco from Finland. Klockers then owned the shop from 1938-1970, at which time ownership transferred to Klockars' son-in-law, Tony Rosellini, who operated the shop until 2017. As noted on the historical marker, Klockars' motto was: “Anything you need, we make.” Klockars’ precision-made tools were used in the Emperor Norton Bridge project (better known as the “Bay Bridge”, completed in 1936), the Golden Gate Bridge project (completed in 1937), and in the construction and maintenance of hundreds of U.S. ships. The marker, placed in 2005 as part of the E Clampus Vitus marker series, notes the location of Klockars’ Blacksmith Shop on Folsom Street between 1st Street and Fremont Street. If approaching the spot from the east, look for the marker mounted on the building on the right side of the street. 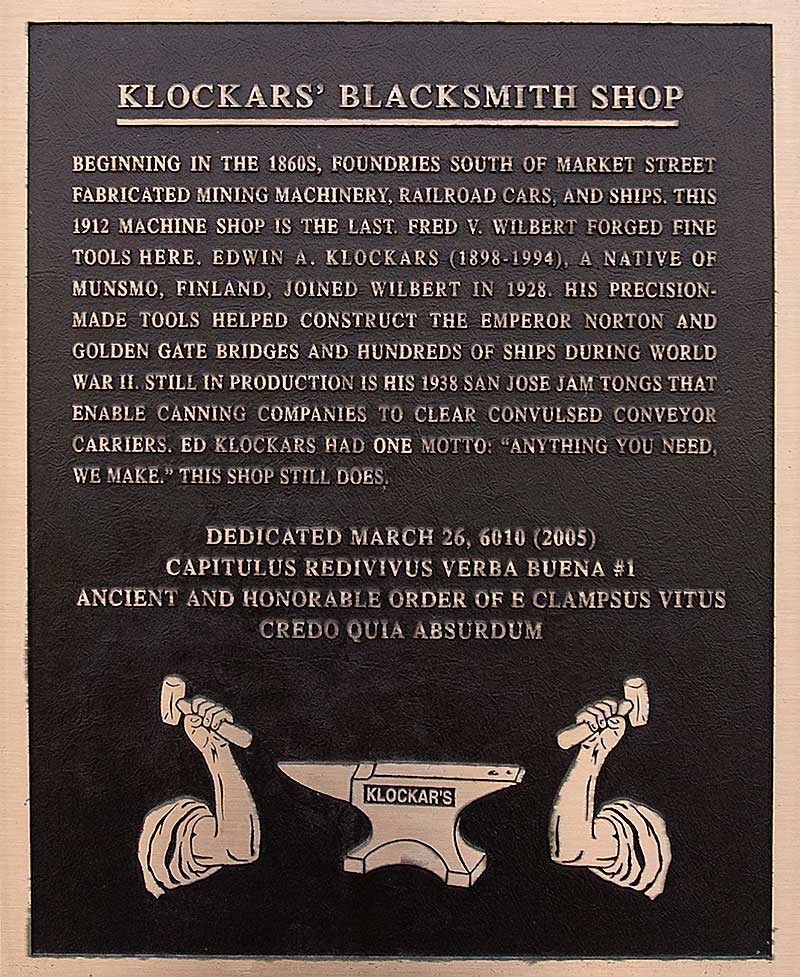 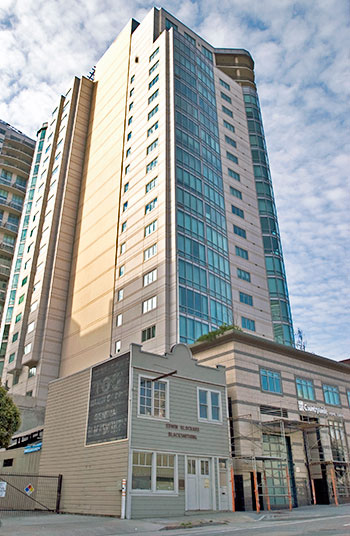 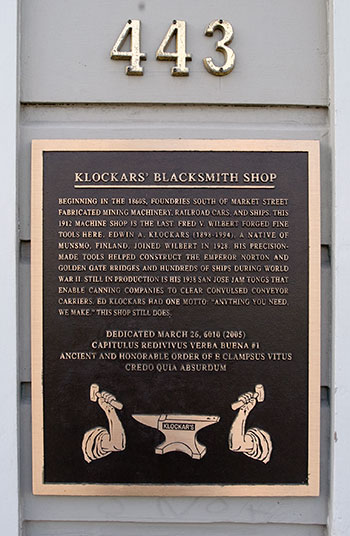 Klockars’ Blacksmith Shop was originally established by Fred V. Wilbert in 1912 as the Wilbert Blacksmith Shop. Wilbert housed his forge in a two-story, wood-frame industrial building located at 443 Folsom Street. At one time, this neighborhood had been the center of the carriage trade in San Francisco.

As early as the 1860s, San Francisco housed several industrial metal works south of Market Street. These businesses made machines and tools for mining, and they also fabricated parts and tools for the construction of railcars and ships. Wilbert opened his Folsom Street forge relatively late in the game, only after the 1906 earthquake and fires had destroyed much of the city.

Edwin A. Klockars (1898 – 1994) joined Wilbert in operating his Blacksmith shop beginning in 1928. That same year, Klockars had emigrated to San Francisco from Munsmo, Finland. In 1938, Klockars took over from Wilbert, independently owning and operating the shop until 1970. At that time, ownership was transferred to Klockars' son-in-law, Tony Rosellini, who continued to operate the shop until 2017. Rosellini had worked alongside his father-in-law, Ed Klockars, before assuming ownership of the shop.

Klockars liked to say his Blacksmith shop could make anything that was needed. This included making precision-made tools which were used in the construction of the Golden Gate Bridge and the Emperor Norton Bridge ("San Francisco-Oakland Bay Bridge") projects during the 1930s. Additionally, Klockars’ precision-made tools were also used to build and maintain the fleets of U.S. ships which were in service during World War II. Many of the other parts and tools forged at Klockars’ Blacksmith Shop found their way all over the country.

Over the decades, Klockars’ Blacksmith Shop forged everything from manhole covers to elevator brackets. It became especially well-known for manufacturing the huge metal tongs that are used in assembly line canning production. Klockars son-in-law, Tony Rosellini, operated the shop for over 45 years, from 1970 – 2017. During this period, Klockars’ Blacksmith Shop was designated a San Francisco Landmark by the city of San Francisco in 1982.

The historical marker is outdoors. The blacksmith shop is now permanently closed.