In the very early morning of December 24th, 1881 a house fire occurred at the corner of 28th Street and Carter Avenue at what was the Gibbons family home. Three children (Fannie Gibbons Robert Gibbons, and Emma Thomas) were thought to have been trapped inside and burned alive, as their bodies were pulled from the flames; however, it was soon discovered that the children had been sexually assaulted and brutally murdered. The incident and the subsequent trial of three suspects outraged local citizens. One suspect, George Ellis, was lynched by an angry mob on June 3, 1882. In October 1882, another mob attempted to capture the remaining suspects as they were being escorted by state militiamen. The militia opened fire to disperse the crowd, killing and wounding multiple people. 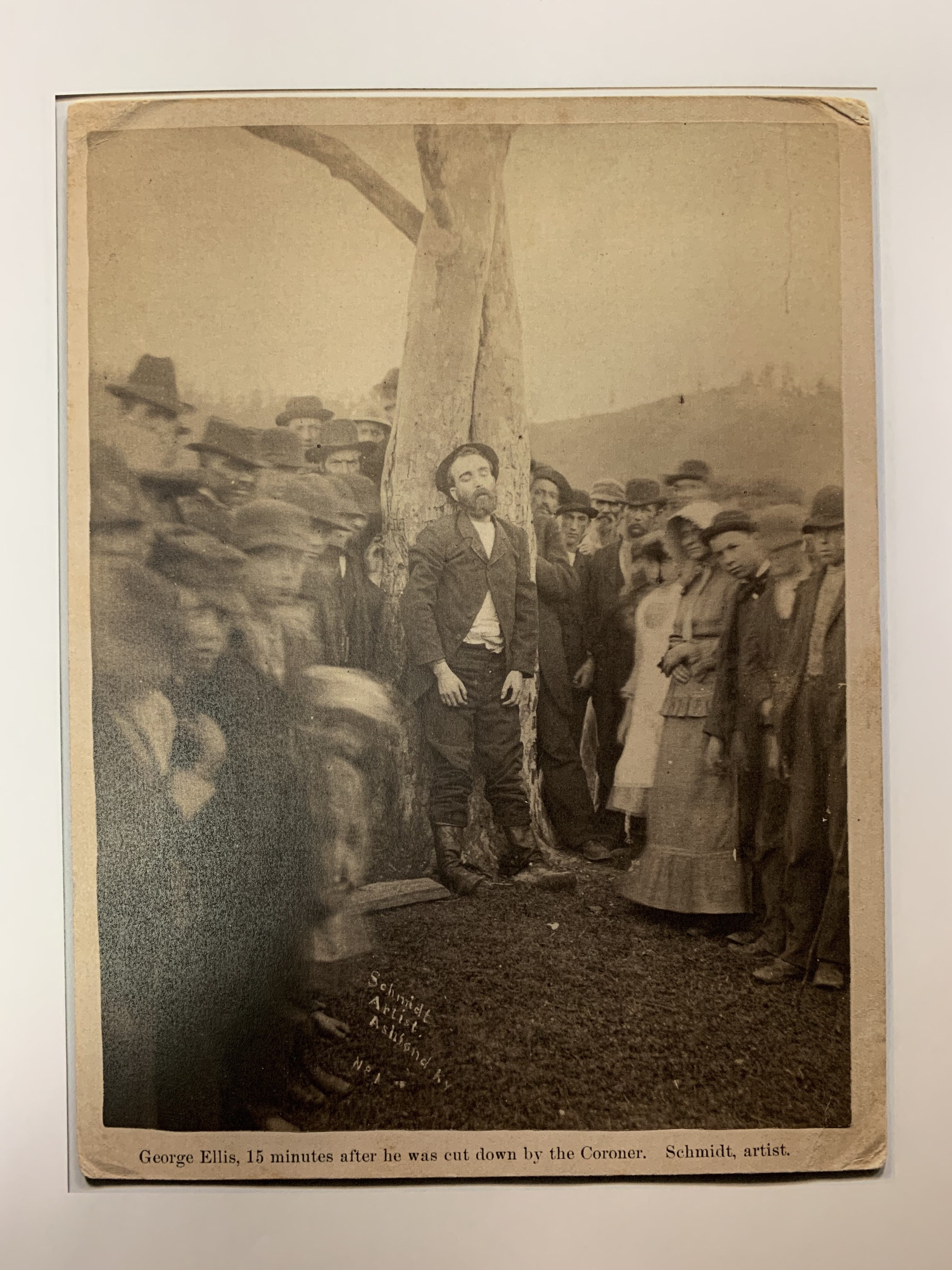 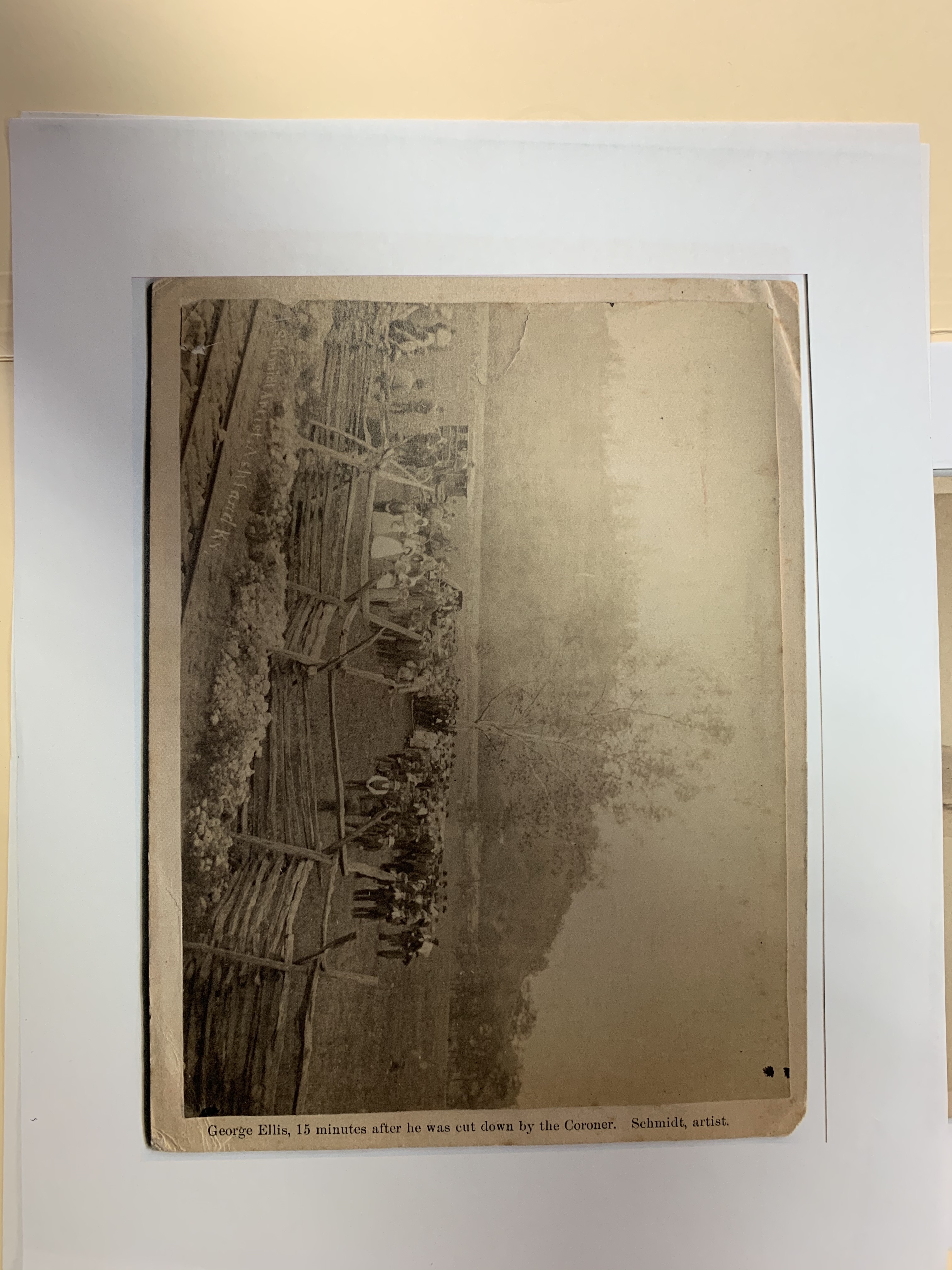 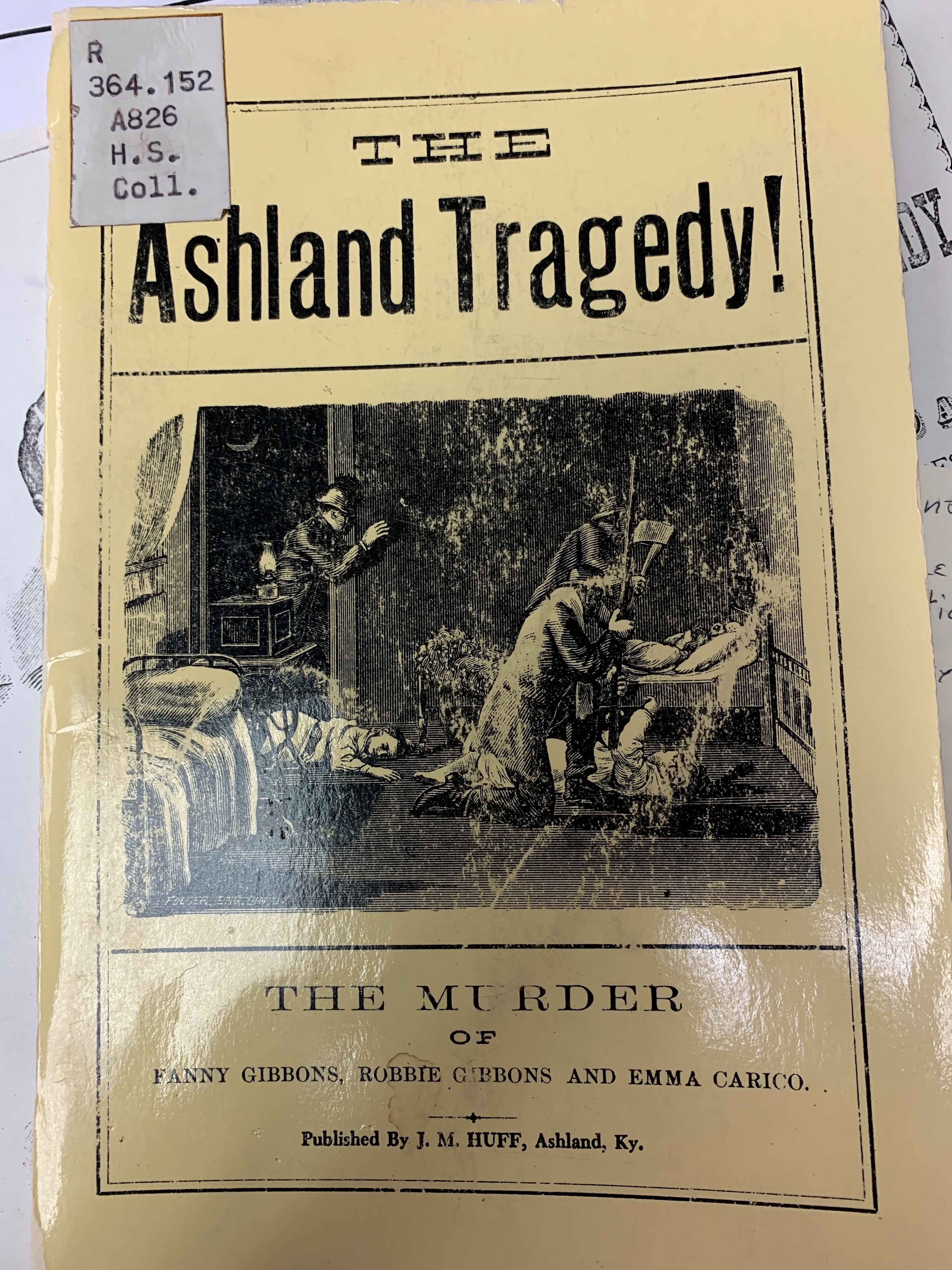 News Article on the Tragedy 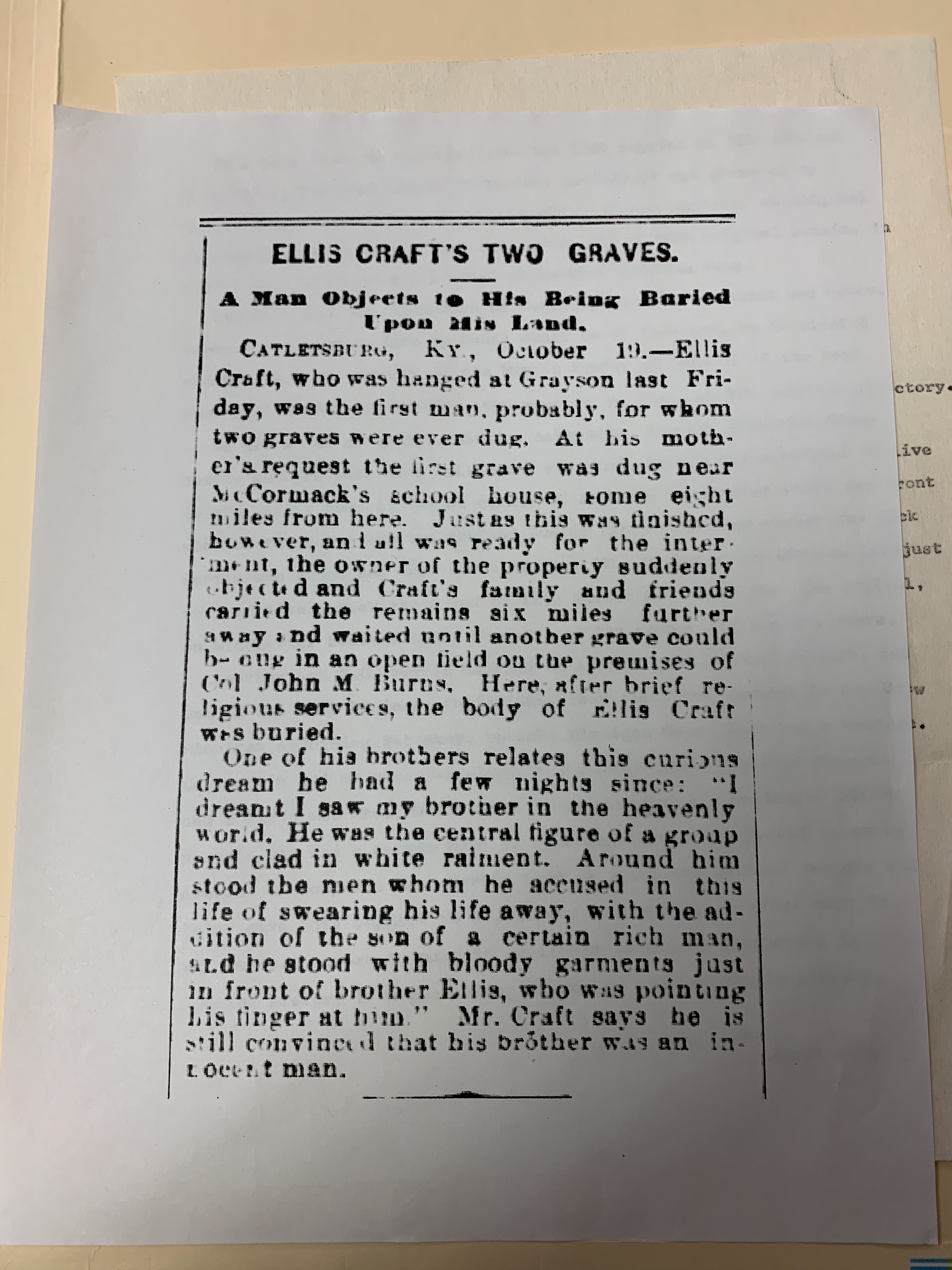 The story begins on December 23rd, 1881. Mrs. Gibbons and her youngest son, Sterling, had gone to Ironton for the night to visit with her other, married daughter. Mrs. Gibbons had asked Mrs. Thomas if Emma could stay with Fanny while she was gone for the night. Being just across the street, Mrs. Thomas had no issue with her daughter spending the night with Fanny and Robert to keep them company while their mother was away. At around 5:00 AM Mrs. Thomas looked out over to the Gibbons house and saw what she thought to be a blind burning. She rushed over to the house and upon finally getting inside and seeing the fire she shouted for help. The bodies of the three children were eventually found and pulled from the fire and laid upon a mattress. It was assumed the children had suffocated on the smoke and been burned in the fire; however, the morning sun shed light upon what truly happened. The bodies had been horribly mutilated and upon further medical examination it was found that all three had been brutally murdered and the two girls sexually assaulted beforehand.

A committee was formed and money was raised to pay investigators to locate those responsible for the horrendous crimes, J. M. Huff being one of the secretaries of the committee. George Gibbons, the Gibbons children's father, was the first suspect as his whereabout were unaccounted for at the apparent time of the murders and he had yet to return since. As other investigators pointed their fingers at Gibbons, U. S. Marshal Heflin of Maysville worked to prove the father's innocence. He located George Gibbons in West Virginia where he had been since December 16th. He brought Gibbons and Mr. Andrew Hager, who Gibbons had been boarding with, back to Ashland. Hager testified on Gibbon’s behalf, that he had in fact been staying at his home since the 16th and that he had seen him every day since then. Hager stated that his home was located too far out for anyone to make it into town, catch a train to Ashland and back, in less than a day. This proved George Gibbons had nothing to do with the murders, but it left the town hungry for justice and vengeance.

On January 2nd 1882, George Ellis was taken in to be questioned by Deputy U. S. Marshal Heflin and the committee after displaying suspicious behavior. Ellis eventually recounted every horrible detail of the heinous crimes committed against the Gibbons children. He stated on record, that William Neal and George Ellis had talked previously about Fanny Gibbons and Emma Thomas and had made plans to have intercourse with the girls before Christmas. Ellis said Craft and Neal threatened him at gunpoint to come to the Gibbons home that night and to help commit the crimes and to then set the bodies on fire. Ellis admitted to holding the girls down and setting the fire but that he had no choice or Neal and Craft would have killed him. Craft and Neal were brought in and Ellis gave his account of that night twice more in front of each of the men. Ellis tried to recant his statement after spending a night in jail with both Neal and Craft; however the arrests were still made and the examining trial was set for one o' clock, that day, in Catlettsburg. The whole town of Ashland shut down for everyone to attend the trial in Catlettsburg and talk of a mob began, but the citizens all agreed that no action would be taken without sufficient evidence and a ruling by the courts. The trails were set by Judge Brown and Judge S. S. Savage for January 16th.

Due to suspected mob action and fear that the prisoners would be lynched, all three accused were moved by boat to Maysville. The mob of citizens arrived to find the prisoners being taken away and feared that they would not be served due justice; they therefore boarded a steam boat and went in pursuit of the prisoners and the guards watching them. When both landed in Ashland the citizens found the ferry to be empty as the prisoners had been moved to a different steam boat. The people of Ashland felt they had been wronged and met with Judge Brown to tell they had no intentions of lynching the prisoners, only that they wanted to return them to Ashland so they could be served justice for the horrible crimes they had been accused of committing.

On the 11th of January the three men were brought back to Catlettsburg, under the guard of soldiers, for trial. The investigations continued for the next five days leading up to the trial. The first up for trial was William Neal for the Murder of Emma Thomas (Carico). After hearing from various witnesses and being presented with the murder weapons over the eight day trail, the jury deliberated for only eighteen minutes before arriving on the verdict of guilty and calling for the death penalty. Ellis Craft's trial followed immediately after. The same witnesses, testimonies, and evidence (weapons) were used in Craft's trial. After several more days, the jury again deliberated for twenty minutes and produced the same verdict, guilty. The jury again called for the death penalty.

On February 6th, the Monday following the trials of Neal and Craft, the execution days were set. Both men declared their innocence. Both men were sentenced to hanging on April 14th 1882, between sunrise and sunset. This marked the end of the Neal and Craft cases and the trial of George Ellis, charged with three counts of murder, was set for the regular May term of court. George Ellis went on claim that Neal and Craft were innocent and that he and two African-American men had committed the crimes against the Gibbons children. When William Neal's coat, smeared with blood, was found near the scene of the crime and entered into trial as evidence against Ellis's claims, he tried to plead insanity.

An appeal for the case was made and on April 10th the appeal was brought up in the Court of Appeals. The decisions of the Lower Courts on the cases of Neal and Craft were reversed on grounds of a technicality on the wording of Judge Brown to the jury. The cases were set for retrial with an undecided date. The towns people all waited anxiously for a verdict; however, the day ended without one announced publicly. The day of executions came and went and April gave way to May without any actions taken against Craft and Neal by the Courts.

On May 22nd, Craft and Neal, along with several other prisoners, unsuccessfully attempted to escape from jail. The townspeople were becoming outraged by a lack of decisions by the courts regarding the case and the news of the attempted escape did nothing but fuel the people's anger. On Tuesday, May 30th, George Ellis stood trial. The prosecution charged him with the murder of Robbie Gibbons. The evidence and witnesses were much the same as those produced in the Neal and Craft trails. The jury deliberated for twenty-two hours before arriving on the verdict of guilty and sentencing Ellis to life in prison - an outcome not well received by the general public and people of Ashland.

On the Friday after Ellis's sentencing, between 11:00 PM and midnight, eighteen masked-men hijacked a train to Catlettsburg. There, they broke into the jail and kidnapped George Ellis. He was taken back to Ashland, and brought to a large sycamore tree. Ellis was asked once more if he was truly guilty of murdering the children; Ellis responded that he, Neal, and Craft were all guilty and deserved to die. The mob then lynched Ellis on the tree and left his body hanging there until the following afternoon.

The courts announced that the trials of Neal and Craft were set for the third day of the October term of the Boyd County Circuit Court. The announcement, almost a year after the crime was committed, renewed the urge for revenge among people in Ashland. The prisoners were placed under armed protection of the state militia. A change of venue request was brought forth to the court and was approved by the judge, who set the venue to Carter County in order to have a fair trial. The new trial date was set for February of the following year in Carter County, much to the dismay of the townspeople. Neal and Craft were to be escorted back to Lexington by armed soldiers to await their trials. As the prisoners and soldiers boarded the steamboat, train cars from Ashland holding close to two hundred men and boys, came rushing into town. Leaders of the mob came forth before the armed militia and demanded the prisoners be handed over. The prisoners and their guards boarded the boat and were able to travel to Ashland, but the mob had reached there first and was waiting for them on the river banks with the townspeople of Ashland, including many women and children. Eighteen of the boys from shore boarded a ferry to meet the militia, demanding again that they hand over the prisoners. It is not known who fired the first shot; however, fifteen hundred shots were fired by the armed soldiers at the men, women, and children of the town. The soldiers fired in all directions leaving many citizens dead, seriously wounded, and some slightly injured.