Constructed between 1905-1096 by Frederick G. Schiebler, Jr., the Old Heidelberg Apartments is a unique structure within the Point Breeze neighborhood in Allegheny County, Pittsburgh, Pennsylvania. Listed in the National Register of Historical Places in 1976, the apartment complex is noted for its European architectural inspirations. In addition to the designs, the Old Hiedelberg Apartments was an early example of suburb housing, which was similar to European planned industrial communities. Schiebler's designs are the earliest examples of the proto-modern in the nation, and he was one of the driving forces of bringing European and Japanese influences over to U.S. The Old Hiedelberg Apartments have been continuously occupied and maintained throughout the years, and the complex is still used today for housing. 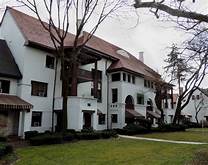 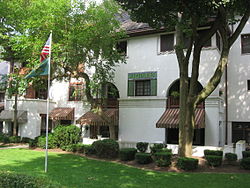 Frederick G. Schiebler, Jr.: The Man Behind the Apartments

Frederick G. Schiebler, Jr (1872-1958) was one of the most significant figures of U.S. architecture because he is one of the major driving forces of implementing both European and Japanese architectural and design influences. From an early age, Schiebler was locally apprenticed, and later on, he opened his own architecture firm where he began experimenting with European designs, such as the Arts and Crafts Movement, the English Free Style, the Viennese Secession, and Art Nouveau. Also, Schiebler took some inspiration from Japanese designs, such as floral motifs, landscaping, and sculptures. Schiebler's highly individualistic work attains the level in both function and refinement of the international styles he brings forth in his designs. Until his death in 1958, Schiebler has been commissioned in over 150 buildings, complexes, houses, and row houses within Pittsburgh's neighborhoods and suburbs. Some of Scheibler's works include the Highland Towers Apartments, the Parkstone Dwellings, Linwood Apartments, and Vilsack Row.

Schiebler built the Old Hiedelberg Apartments approximately between 1905-1906, and the complex stood out from the buildings with the Point Breeze neighborhood. Unlike the other buildings and houses in the East Liberty neighborhood that are examples of late-nineteenth century and early-twentieth century classical, Georgian, and Tudor architectural revivals, the Old Hiedelberg Apartments is noted for its basic horizontal form and new structural concepts, which are major elements in proto-modern designs.

The apartment complex consists of a three-story central building and two forward projecting central sections, all of which have steeply hipped roofs in red tile. The smaller side wings are two stories. In addition, there is a two-story building and attic house next to the main building that faces Braddock Avenue. During construction, Schiebler used traditional brick and covered the building with two coats of Portland cement. The windows were fashioned into a recessed rectilinear shape, which created a hard-edge-geometric effect. Also, Schiebler carved mushroom reliefs under the windows, which harks back to the Art Nouvaeu style. Scheibler fashioned exposed I-beams in the two-triple-story porches, which was one his trademarks in his designs.

Schiebler's designs for the Old Heidelberg Apartments are early examples of suburb housing plans, which he took inspiration from European planned industrial communities. Listed in the National Register of Historical Places in 1976, the apartment complex is noted for its European architectural inspirations. Throughout the years, the complex had been continuously lived in and well-maintained, and the neighborhood has not deteriorated. The apartments are currently still in use and are said to be in condition.