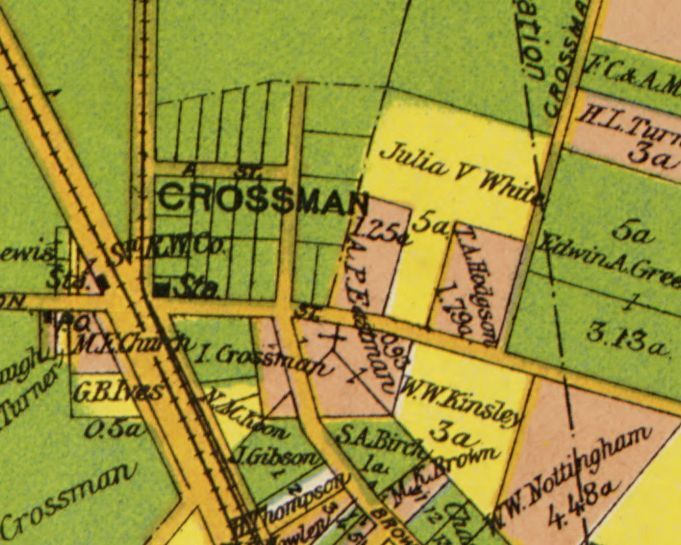 The Eastman-Fenwick house was constructed for Albert Prescott (A. P.) Eastman in 1876 on 1-1/4 acres he purchased from Isaac Crossman. The original plans and specifications of Mr. Eastman for construction of the wood frame house survive. The house was sited near the eastern side of the lot to allow for garden and yard space to the west. The house faces southeast toward Lee Highway. Porches attached to the front and back of the house served as conservatories for Mr. Eastman's plants in the colder seasons. Additions were constructed onto the home in 1898, including two indoor bathrooms. Preservation of interior details is excellent including original wood flooring, mantels and cabinets designed by A. P.'s nephew.

A. P. was a Union veteran of the Civil War and served in the Army of the Potomac. A native of New Hampshire, he began as a soldier in the First Maine Heavy Artillery in 1862 and worked his way up from Corporal to Second Lieutenant. A. P. guarded Chain Bridge, the connection from Washington to Arlington over the Potomac River, and saw action in the Battles of Spotsylvania. Harris Farm, and Petersburg in Virginia. He was honorably discharged due to wounds on October 27, 1864.

In 1880, A. P. and his wife, Sarah N., were in their thirties and lived in the house with their two young sons, William R., age 7, and Frank H., age 3. The family called the property Everbloom. By 1900, A. P. expanded his landholdings by buying land on the opposite side of the street, intending to leave the land undeveloped to preserve his view. The property was in the town of Falls Church after 1875 but was part of the East Falls Church neighborhood annexed to Arlington County in the 1930s.

A. P. worked as a clerk in the War Department (the equivalent of the modern-day Department of Defense). A. P. and Sarah lived alone in the home on Lee Highway (known then as Washington Street) by 1910; A.P. still worked as a government clerk for the War Department. The couple had been married for 40 years by 1910. When A. P. died in July 1915 at age 73, funeral services were held in his home in East Falls Church before his burial in Oak Hill Cemetery in Washington, D.C. His widow lived until January 1939.

One son of A.P. and Sarah, William, was born in Washington, D.C. in 1873 and went on to graduate from Cornell University and medical school. William was a retired Army surgeon at the time of his death in December 1945 at a military hospital in San Diego. He served with the Fifth Corps in Europe. Another son, Frank, also was an Ivy League graduate of Cornell and went on to work as an electrical engineer. Frank served as president of the Arlington Rotary Club and was on the Board of the Fairfax Savings and Loan Association.

A granddaughter of A. P. and a daughter of Frank, Eleanor Russell Eastman, married Virginia State Senator Charles R. Fenwick in 1929. Fenwick, a native of nearby Falls Church, was a graduate of the University of Virginia and its law school. The Fenwick's moved into the Eastman-Fenwick house in 1946; the couple had no children. The widowed Mrs. Fenwick was still a resident of the home when interviewed in 1978 by the county. The 4-bedroom house with nearly 3,500 square feet and its lot became an Arlington County historic overlay district in 1980, complete with the original white picket fence. Some of the backyard maples and elms survive from plantings of over a century prior; ornamental topiary shrubs decorate the neat front yard.

Military Order of the Loyal Legion of the U.S.. Collection of Circulars of Various State Commanderies. Volume Part 1. 1898.