During the year of 1976, the Decatur County Historical Society organized the present museum as a project celebrating the nation's bicentennial year. It was located on the second floor of the Knights of Pythias Building. After five years in this location, an anonymous donor contributed the money for the present home at 222 N. Franklin Street, the Lathrop/Shannon House. Since then the house has been restored as a museum keeping the ambiance of a late Victorian house. In 2005/2006 the Museum used a welcome, anonymous gift to build a new addition to the house which consists of a meeting room, archive room, bathrooms, warming kitchen, and a gallery on the second floor. The history of the house and property is interesting and corresponds to events and movements in the county. A part of the house was probably built ca. 1850. With the coming of the railroad to Greensburg in 1853, the Civil War, and an economic boom after the War, Greensburg grew wealthier and more sophisticated houses were built around the town and county. In 1872 Ezra Lathrop, an early settler from the 1820s, bought the property and remodeled the house adding rooms and a hallway. The front of the house is essentially the same as Ezra and his family left it. Other rooms and porches were added later. The museum is a typical 160 year-old house which has been lived in by families for that amount of time. The Lathrop/Shannon family lived there from 1872 to 1980, so there is a continuity of use. 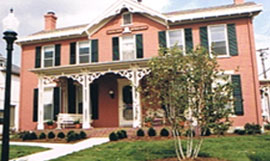